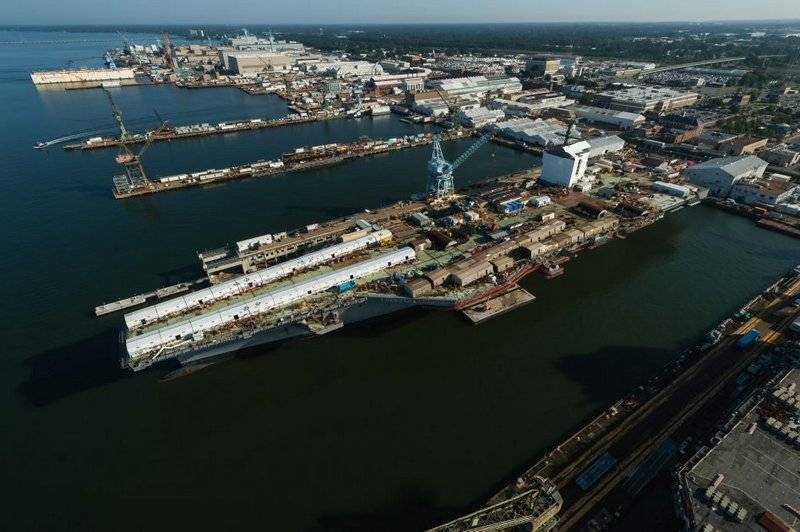 The newest American aircraft carrier, such as the Gerald R. Ford, USS John F. Kennedy (CVN 79), will be completed and transferred to the US Navy in one phase, not two. According to the website of the US Naval Institute (USNI News), on November 2 this year, the US Navy signed a new contract, changing the program for completing the aircraft carrier.


According to the initial contract between the Navy and Huntington Ingalls Industries, the construction of the new aircraft carrier John F. Kennedy was designed for a two-stage delivery. Those. at the first stage, the ship was transferred the fleet in the "basic" version and already on the second, the ship was retrofitted with additional equipment, including the integration of the deck version of the fifth generation F-35C fighters.

Now the decision has been made to complete the construction of the aircraft carrier in one stage. Under the new $ 315 million contract, a number of changes are being made to the construction program, including the integration of fighters before the carrier is handed over to the fleet. Accordingly, the date of delivery of the ship to the customer is also postponed. Instead of two dates: the end of the first stage - 2022 and the second stage - 2024, a single date was named - June 30, 2024. The current readiness of the aircraft carrier is estimated at 76%.

The new aircraft carriers have a length of 337 meters, a maximum width of 78 meters, and a displacement of about 100 tons. According to the declared characteristics, they can carry an air wing of up to 000 aircraft and helicopters. It is planned to carry F-90, F / A-35E / F Super Hornet, EA-18G Growler aircraft, as well as MH-18R / S helicopters.

Ctrl Enter
Noticed oshЫbku Highlight text and press. Ctrl + Enter
We are
The US Navy decided to order two aircraft carriers and saveNew US aircraft carrier is half ready
8 comments
Information
Dear reader, to leave comments on the publication, you must to register.