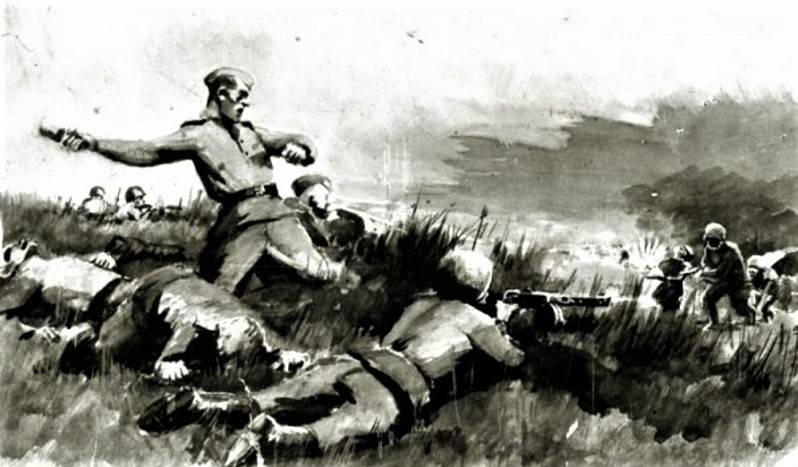 Our border is on the Kursk Bulge!

In this year of the 75th anniversary of the Victory, when we again and again remember every single episode of the Great Patriotic War, I would like to once again turn to the summer of 1943. Kursk Bulge. 18 border guards of a platoon under the command of Lieutenant Alexander Romanovsky are ordered to occupy a strategically important height and hold it until reinforcements arrive.

They didn't even have time to dig in, when enemy infantry appeared with the support of armored personnel carriers and lungs tanks... The border guards took a long battle, destroyed many of the Nazis, knocked out several enemy vehicles, and when there was no ammunition left, they fought the enemy hand-to-hand. All eighteen, along with their commander, were killed. 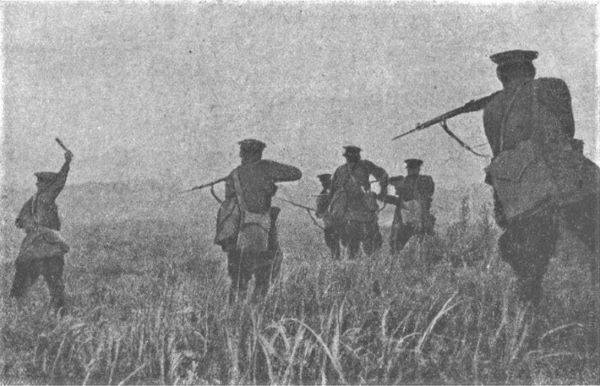 The command of the notorious 70th Army, formed from the NKVD troops, in which the border guards and servicemen of the internal troops fought, presented all the dead for the title of Hero of the Soviet Union.

The 70th Army, which was sometimes called that - the army of the NKVD troops, was formed by the beginning of 1943 far in the rear - from Tashkent to Khabarovsk, and immediately equated in rights with guards units and formations. First, the 70 was sent to the reserve rate, and then to the Central Front. Towards Rokossovsky, near Ponyri, on the northern flank of the Kursk salient.

It is here that an excerpt from one award sheet must be cited. It was signed by the commander of the 224th Pamir Rifle Regiment, Colonel Surzhenkov, to Junior Sergeant Ilyas Arslangereev:

“At the height of the July offensive battles, when the enemy tried to break through to Kursk at any cost, the regiment had the task of occupying a height near the village of Teploye. The platoon of Lieutenant Romanovsky was ordered to block the right flank to regroup the 1st rifle battalion with its exit to the village. Self-styling.

The Germans, taking advantage of the small number of our cover, pulled up to 18 submachine gunners against a platoon of 200 men and, taking advantage of an advantageous position, hiding in the rye, gradually surrounded our platoon. Having guessed the enemy's plan, Lieutenant Romanovsky entered into an unequal battle. Each soldier firmly went to rapprochement with the enemy, burst into the trenches, shot at point-blank range, struck with a bayonet, hit with a shovel.

The Germans backed away, tried to dig in, but the heroes continued to overtake and destroy them. The ranks of the Nazis were thinning. At the site of this intense fire and hand-to-hand combat, 84 German soldiers were killed. Romanovsky and all 18 heroic fighters were killed, but they did not retreat a single step. The command order was carried out. Junior Sergeant IA Arslangereev is worthy of posthumously conferring the title of Hero of the Soviet Union. " 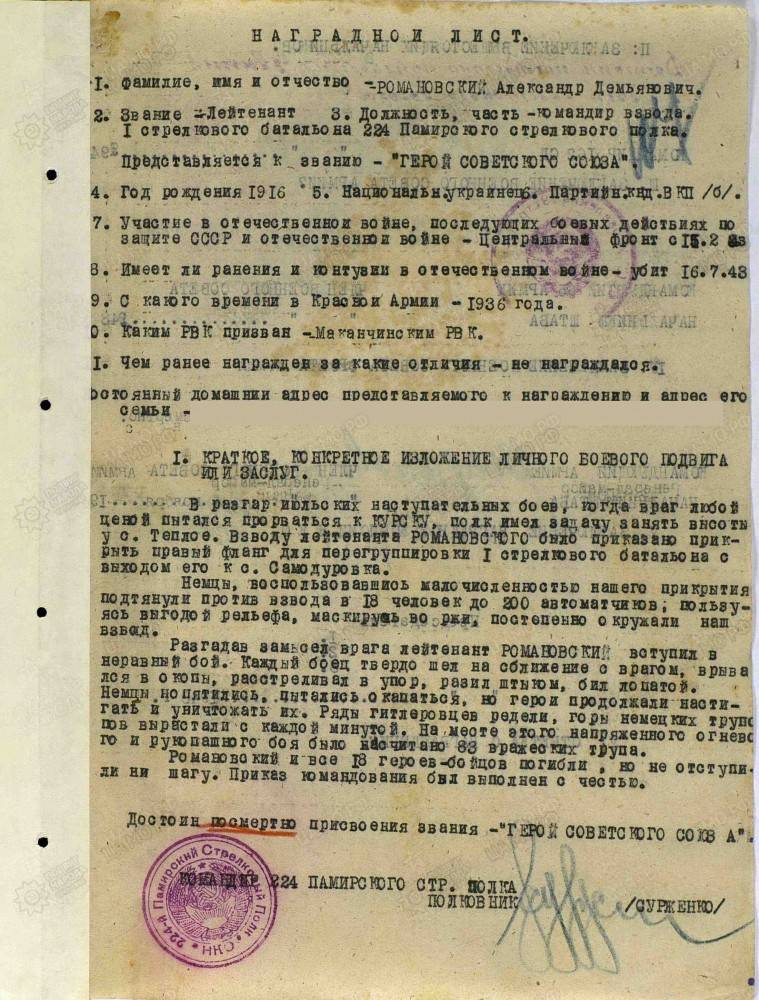 However, the commander of the Central Front, Army General Konstantin Rokossovsky then postponed the signing of the award lists. Only a few months later, he returned to reviewing the feat of the soldiers of the Romanovsky platoon. The general of the army must have thought for a long time, as if remembering what he had experienced in the dungeons of the NKVD in Leningrad and Moscow. 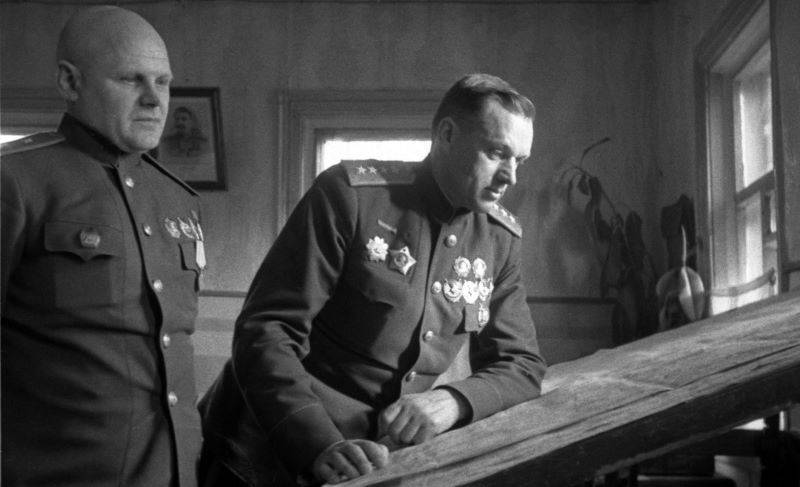 No, Konstantin Konstantinovich has not forgotten anything - neither broken ribs, nor knocked out teeth. And he remembered all his torturers by sight. Being at the front and accidentally catching the eyes of the commander, they were terribly afraid that they would remember the atrocities they had committed.

But Rokossovsky was not like that. Every time he met former flayers in combat conditions, he suppressed his boiling anger. But on that very day, most likely, without understanding in detail the feat of the border guards of the Romanovsky platoon, the general crossed out everything previously proposed by his subordinates.

Who will now say why Rokossovsky decided in his own way that they were all worthy of being awarded ... only with the Orders of the Patriotic War of the XNUMXst degree. In those days, perhaps it was a very worthy reward for the fallen. But many years later, when everyone who fought or even just stayed in battle formations were awarded the same orders, the significance of this award, alas, was seriously depreciated.

By the way, it is worth mentioning that none of the officers and fighters of the 70th Army who fought with the enemy at that time was never nominated by Rokossovsky for the title of Hero of the Soviet Union. Officially, it is believed that the 78th heroes were still awarded the Golden Stars, but they were awarded at a time when the 70th Army was not part of the front under the command of Rokossovsky.

Most likely, it happened in the spring of 1944 in the 2nd Belorussian Front with Colonel-General PA Kurochkin, who was replaced by General IE Petrov, who was glorified by the writer Karpov “The Commander” during the reorganization of the front.

But the 70th Army, which did not have a chance to become the Guards, went a path no less glorious than that of most other armies in that war. After the Kursk Bulge, she had both Polesskaya and Belorussian, as well as the liberation of Poland, East Prussian, East Pomeranian and Berlin operations. 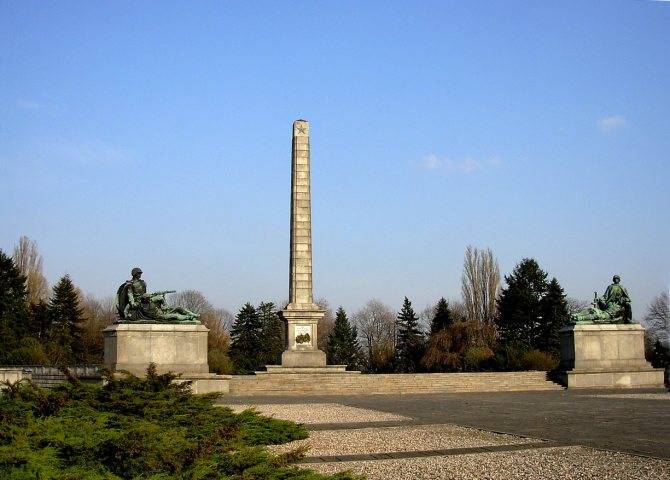 War Memorial Cemetery in Warsaw, where soldiers of the 70th Army are buried along with others

And the years fly by, our years are like birds ...

Years passed, and we began to forget about those who fought with the enemy. We do not remember the heroes of the Soviet Union, let alone those who were awarded other awards. Everything somehow merges in memory.

For a long time, the border guard officer from Kursk Vladimir Korolev and the relatives of the victims have been trying in vain to remind that the feat of the soldiers of the Romanovsky platoon should be evaluated differently. In vain: all their efforts are in vain. 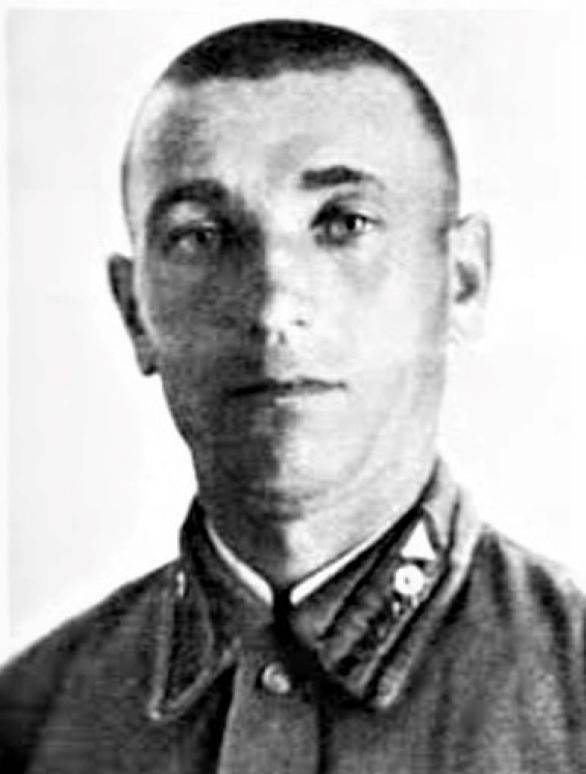 Hardly anyone would dare to admit that commander Konstantin Konstantinovich Rokossovsky then, in the difficult forties for the country, made a mistake. Many are thinking about this, but for some reason no one will say: "Yes, he was wrong, and all these heroes, starting with Alexander Romanovsky (pictured), should receive the title of Hero of the Soviet Union."

All of them died in that battle near the Kursk Bulge and were buried in one grave. For the whole history During the Great Patriotic War, three cases are known when the Stars of Heroes were received by the soldiers of one of the units as a whole.

The border guards of the Romanovsky platoon could well have become the fourth. But that did not happen. Why? And let someone say that everything is over, and there is no need to return to this. No, it's worth it. This requires only will and courage, you need to knock on doors and receptions of various instances. 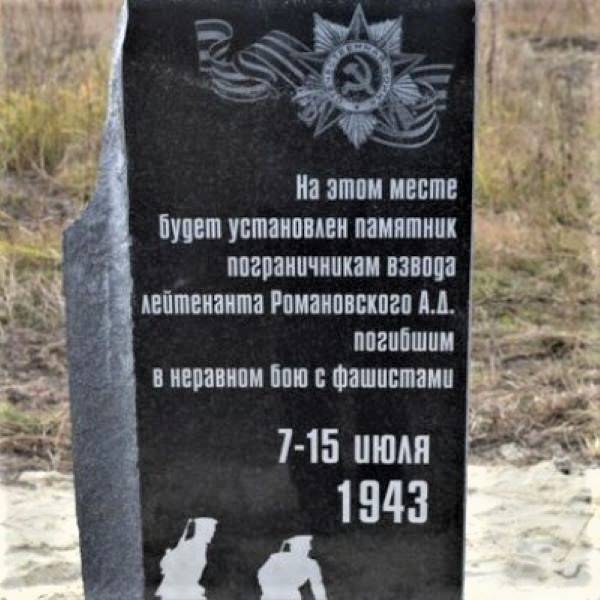 In the meantime, sadly, no one wants to deal with the awards of the dead border guards of the international platoon: Russians, Ukrainians, Kazakhs, Tartars, Chechens and Zaporozhye Cossacks. And they don't remember them anymore ...

Ctrl Enter
Noticed oshЫbku Highlight text and press. Ctrl + Enter
We are
Myths of the Great Patriotic. Papier mache helmet"Panfilov" of the Arc of Fire
85 comments
Information
Dear reader, to leave comments on the publication, you must to register.