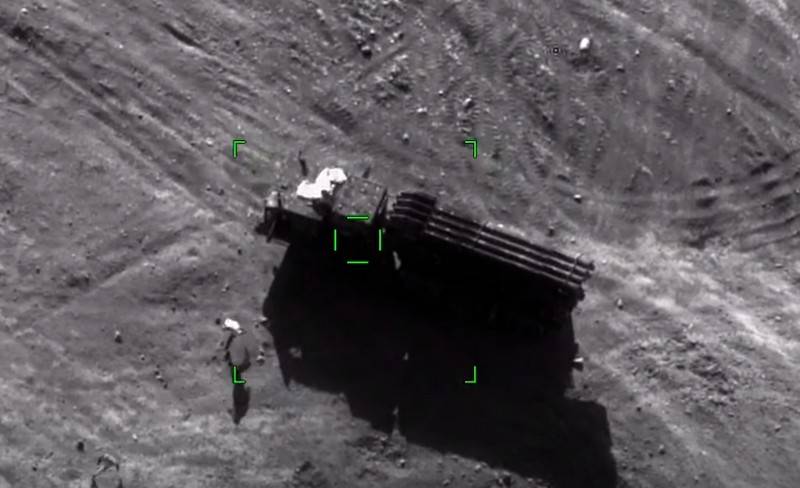 The Azerbaijani army destroyed the "Smerch" MLRS of the Armenian armed forces shelling the city of Barda. This was reported by the press service of the Ministry of Defense of Azerbaijan.


The Azerbaijani military department showed in detail the destruction of the enemy's Smerch MLRS, which fired at "civilians and civilian infrastructure in the city of Barda." The corresponding video was posted on the official channel of the Ministry of Defense of the Republic on YouTube.

On October 29, at about 15:18, the enemy's Smerch MLRS was destroyed by accurate fire from our units
- said in a statement.


Earlier, Baku reported about the artillery shelling of a number of settlements by the Armenian army.

From 07:35 the territory of Goranboy, Terter, Agdam and Agjabedi districts is exposed to artillery fire. Azerbaijani army is taking adequate measures
- stated in the Ministry of Defense of Azerbaijan.

In turn, the Armenian military department reported on the attempts of the Azerbaijani army to launch an offensive in the southeastern and northern directions on the night from Thursday to Friday. As stated in the press service, all attempts were thwarted by the defense army of the unrecognized Nagorno-Karabakh Republic (NKR).

During the night, units of the [NKR] Defense Army continued to conduct operations in areas where enemy groups were located, as a result of which they destroyed a large number of enemy ammunition and manpower. After midnight, enemy forces attempted an offensive in the southeast direction, which was stopped by army units. The enemy also tried to succeed in the northern direction, which was also stopped
- said in a statement.

Meanwhile, the Armenian Armed Forces posted on their YouTube channel a video of the training of volunteers who arrived from Javakh (Armenian name) before being sent to the front. This territory was once part of "Great Armenia", but now it is located on the territory of Georgia and is called "Javakheti". A large Armenian diaspora lives in this region, which does not consider this land to be Georgian.

Ctrl Enter
Noticed oshЫbku Highlight text and press. Ctrl + Enter
We are
Azerbaijani troops hit military vehicle in Nagorno-KarabakhNew war in the Caucasus be?
139 comments
Information
Dear reader, to leave comments on the publication, you must to register.