Who threw Yanukovych: expert opinion after the signing of the law on language policy 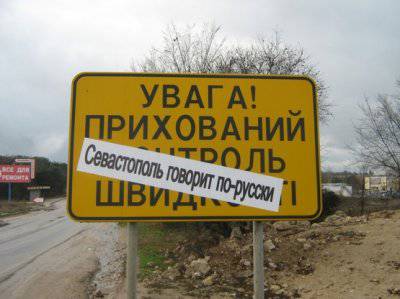 We did not have time to dry the ink on the law On the Basics of the State Language Policy, signed by President of Ukraine Viktor Yanukovych, as this step provoked a real storm of radical, even mutually exclusive, comments. At both sides. In particular, the participant of the meeting with the intelligentsia held on the eve (a format that sends greetings to the Soviet nomenklatura past) writer and people's deputy Pavel Movchan (“Reforms for the Future”) called Viktor Yanukovych’s actions “real gadgetry” and made it clear that the guarantor was “ threw "all who, having arrived in Foros, believed him. On the other hand, adherents of granting second-state status to the Russian language in Ukraine (and there are many such in the ranks of the Party of Regions) say that the President of Ukraine has not yet fulfilled the promises made in this sphere during the presidential election, and the signed law has nothing to do with them It has. In the context of current events around the “language theme”, the question arises - who in reality was the president “threw”?

Vasily Stoyakin, political scientist, Center for Political Marketing:
The president threw everyone without exception. People who advised this decision to him, see in him the highest state wisdom - to throw a bone with this and that so that they and others should be pleased. In fact, this is the highest state nonsense, because, firstly, “how many wolves do not feed, it still looks into the forest,” and secondly, there is no sense to “satisfy absolutely everyone” and cannot be.

This situation - frankly idiotic. After all, if you look at the so-called “linguistic situation” in the country from any point of view - as from public opinion, protection of the rights of citizens, European practice - there is no other option than to fulfill your election promises, the president actually does not have. This will satisfy the absolute majority of citizens of the country, but will leave the order of 15% unhappy somewhere. After all, really - to adopt a law that would suit everyone, is impossible. And in such an ideological issue as here, you just need to focus on the opinion of the majority, taking into account the interests of the minority.

Vladimir Fesenko, Penta political analysis center:
The head of state did not “throw” anyone. Everyone has his own motivation in such a harsh assessment of the presidential decision. At a meeting with the intelligentsia, perhaps everyone heard what he wanted to hear. I believe that Viktor Yanukovych, signing this law, acted on the basis of two The first is the fulfillment of their own election promises. Indeed, in the Party of Regions program there is a thesis about granting Russian the status of a second state language, but the president has repeatedly said about a more realistic option: that is, he fulfilled his promises to the voters who voted for him in 2010. Secondly, he helps his own party, for which the “language theme” is one of the main elections. sign this law because it is in the interests of both its voters and its party.

Viktor Yanukovych feels and understands to another extent how the country's leader, that this law is not entirely in favor of state interests and in accordance with his own interests as president of the country. Because you do not need a split of society, the growth of political and social tension. And that is why Yanukovych had to compensate, somehow neutralize the negative consequences of putting this law into action. This is a double format of the president’s interests. He signed, but also demonstrated that he listens to critical comments, in particular, the meeting with the intelligentsia was aimed at this, taking care of the interests of the development of the Ukrainian language. Therefore, statements were made that they would: develop a state program for the development of the Ukrainian language, prepare legislative proposals for the improvement of the signed law.

The president, I repeat, did not have the task of “throwing” anyone. I also note that there is no need to primitize Yanukovych, and other Ukrainian politicians. Here I am now observing the assessments regarding the parallel congress of deputies from the Batkivshchyna All-Ukrainian Public Organization, where Tymoshenko is being presented as a fool. But this is far from the case!

Once again, in such a delicate matter as language, you need to look for a systemic and flexible compromise, and not focus strictly on the majority. We cannot ignore the fact that we have at least a third, according to the census, Russian-speaking citizens. To say that everything is fine here and there are no problems is not worth it. Formally and in reality, there are no big problems for Russian speakers in Ukraine. But the fact that a significant part of them reacts to a language issue in a political sense and the Party of Regions uses this issue in its electoral rhetoric and it works, indicates that the problem exists. You can not close her eyes.

Another issue is that the Kivalov-Kolesnichenko law is in its essence the law on state guarantees for the languages ​​of national minorities, and not the law on the fundamentals of the state language policy. And therefore I am committed to the fact that we need to develop a new balanced law that, on the one hand, would provide guarantees and a material basis for the development of the Ukrainian language as the state language, and on the other, could satisfy the linguistic, ethnocultural rights and needs of national minorities. And it is necessary that this law was prepared not by politicians, but by experts, and so that it was depoliticized to the maximum.

Victor Nebozhenko, political scientist, sociological service “Ukrainian Barometer”:
Yanukovych "threw", first of all, his comrades. Because in fact, now we have the PARLIAMENTARY election campaign, not the presidential one. Therefore, it’s not all Ukrainian President Viktor Yanukovych who loses the status of a stabilizer and guardian in this way, but specific candidates for people's deputies who will make a pass to the Verkhovna Rada for themselves on the signed law. Not more!

Although the law itself needs very serious improvement, and the president himself, I think, understands this very well. But still, the electoral technology and the electoral situation outweighed the need for a wise decision. I will add that this law will not be enforced. If the president speaks Ukrainian and all documentation is conducted in Ukrainian, how do you imagine its implementation? Now, if tomorrow the presidential administration and Yanukovych himself will switch to Russian, then the entire Ukrainian bureaucracy will understand: “Yes, the law must be implemented”. And since this will not happen, then there is no doubt that no one will encourage sociocultural autonomy of either the Russian language, or Hungarian, or Polish, or Romanian, or Tatar, as representatives of other nationalities living in Ukraine expect.

It is clear that the president here has gone on about the political strategists of the Party of Regions, who believe that thanks to this law the electoral superiority of the “regionals” will be restored. Although, in my opinion, this is not true. The signed Law will not have any serous influence on the election campaign.

Alexey Garan, political scientist, school of political analyst, NAUKMA
If we evaluate the decision of the president from such positions, then, probably, it is worth saying that having signed this law, he “threw” Ukraine and, paradoxically, himself. Because in reality from this all stories The state as a whole and the position of the president, including in foreign policy negotiations with Russia, have become weakened. It should be understood that as a result the country has polarized. Instead of acting as president of the whole of Ukraine and seeking reasonable compromises, he made an attempt to obtain additional votes in the East and South of the country.

The problem is that such issues, firstly, are not resolved on the eve of the elections, secondly, they are not done by the hands of such deputies (odious even among the Party of Regions) like Kolesnichenko and Kivalov, and thirdly, which is extremely important, the law was adopted in the Verkhovna Rada with numerous violations of parliamentary procedure. That is, it could not sign, even from a formal point of view. A smart compromise would be to make the necessary changes and adopt a new, improved law. And so it all looked like some kind of not very decent maneuver, election game, which weakens the position of the country.