How does it bite? Russian fishing is under the control of the president 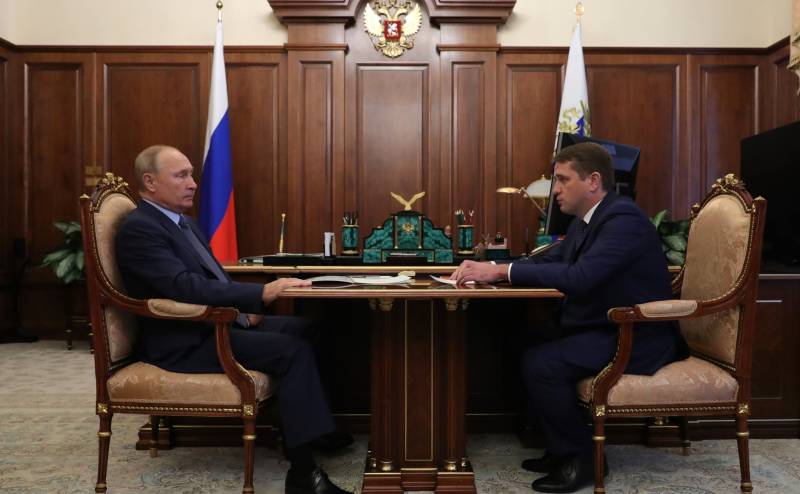 Who among those who like to fish is not familiar with the keen interest in their catch, tackle, biting and other things shown by individual citizens? But in the case that we will talk about, questions of a very similar kind were asked not for the sake of curiosity and not for idle passers-by, but by Russian President Vladimir Putin. And, one might say, the main fisherman of the country, the head of the Federal Agency for Fisheries Ilya Shestakov, had to answer them.


It is clear that the head of state (although everyone knows that Vladimir Vladimirovich is an avid fisherman) was not interested in bait, lures, but in things much more serious and large-scale. It was about the general state of affairs in the domestic fishing industry and its prospects. It is not for nothing that our country has been rich in this industry from time immemorial, being one of the world's leading producers and exporters of "live silver". How are things with him today?

According to Mr. Shestakov, in the industry he leads, he managed to achieve what is an undoubted success in today's difficult situation - to prevent a collapse in the production and processing of sea and river resources. The catch level is not inferior to last year and is equal to about 5 million tons. True, not all types of fish are equally successful: there is, alas, an obvious shortage of salmon. But there will be plenty of sardines with pollock.

However, these are all transient matters, turnover, so to speak. Most of all, the president was interested in how the domestic fishery is developing on a global scale. Several years ago, the Russian authorities and Vladimir Vladimirovich personally proposed a number of measures aimed at making a real breakthrough in the industry. First of all, of course, we are talking about the introduction of a new system of distribution of quotas for commercial fishing, the so-called investment. Its essence was to grant priority for production to those companies that will undertake the obligation to build new fishing vessels and fish processing plants.

Without this, nowhere. You can, of course, in the old fashioned way catch a fish, big and small, on the dozen of the prescribed terms, the pelvis, until they fall apart (well, if not in the middle of the sea). But with such approaches, Russian fisheries have a direct road not to the future, but to the bottom. However, in reality, its prospects are not at all bleak. Ilya Shestakov claims that the investment principle works quite successfully.

Out of 107 fishing vessels, the construction of which has been announced today, fifty should be created just at the expense of investors. Plus 35 crab vessels financed according to the same scheme. The rest will be built thanks to state support - compensation by the Ministry of Trade for almost a third of the cost.

Almost half of the 25 onshore processing plants planned for launch have been built. As for the vessels themselves, 107 out of the 11 mentioned have been launched, and 4 units have already been handed over to customers and are ready to start fishing. As a matter of fact, in this way the strategic task of updating the fishing fleet Russia. Already now, according to the head of the federal agency, we can talk about its "rejuvenation" in the Far East by a quarter, and in the Northern Basin - by all 65%. Shestakov suggested to the President to continue using the investment quota mechanism and develop it further, especially in the Far East region.

Not without problems. For example, some shipyards (especially the Vyborg shipyard) allow themselves delays in the commissioning of ships up to two years. Judging by the keen interest that Vladimir Vladimirovich has shown up to this point, when he mentioned the inadmissibility of disrupting the schedules, someone will be "given acceleration." The head of state is also worried about the problem of delivering resources obtained by hard labor of fishermen from the same Far East to the European part of Russia. Crazy fish transported over such distances, what good, will turn into "gold" - on the shelves of our stores.

According to Ilya Shestakov, everything is more or less adjusted here: the industry works in close contact with Russian Railways, trains are delivered on time and in the right volume. True, at the same time, the agency is already looking at the Northern Sea Route as a way to diversify and reduce the cost of delivering its products from east to west. And, by the way, not only in this aspect: now in Antarctica, scientific research and exploration are carried out by his forces. However, as the head of the department reported to the president, the plans of several companies already include the construction of at least three vessels at Russian shipyards for fishing in this region. According to Shestakov, the implementation of this project alone will ensure production of up to 300 thousand tons of shrimp in a few years.

The agency is also working on another line related to its competence: protection and restoration of fish stocks in Russia. In cooperation with RusHydro and Inter RAO, it is making the most serious efforts to reproduce the domestic natural resources that were fairly squandered in their time. By the way, when the head of the agency touched upon the topic of restoring the population of the famous Baikal omul, which was almost on the verge of extinction due to the stupidity and greed of humans, Vladimir Putin vividly asked if the Hollywood hero Stephen, who became a citizen of our country in 2016, had participated in such an important matter as promised Segal? Having received an affirmative answer from Shestakov, the president asked to convey to the actor his personal gratitude.

Well, all that remains is to congratulate Ilya Shestakov and his colleagues with a notable catch and express the hope that the positive prospects outlined at the meeting with the head of state will continue to be successfully implemented.

Ctrl Enter
Noticed oshЫbku Highlight text and press. Ctrl + Enter
We are
About Stalin and KhrushchevWhat you didn't want to know about England
125 comments
Information
Dear reader, to leave comments on the publication, you must to register.