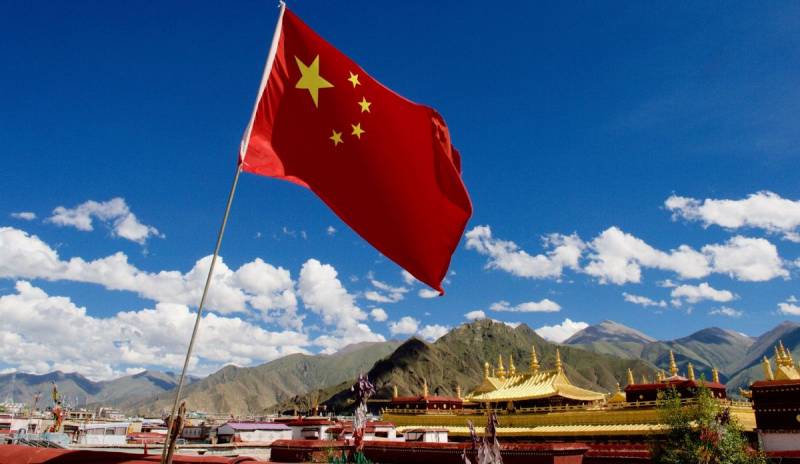 In the Kyrgyz unrest, which resulted in the resignation of the president, a third party, the Chinese, suffered a certain amount of damage, which does not particularly interfere in the political life of Kyrgyzstan. The rebels stormed and plundered gold, coal and copper mines, took the leadership hostage. It cannot be said that only Chinese assets fell under the attack of the looters; among the looted there are Canadian and Russian property, but the greatest damage was suffered by businessmen from the Middle Kingdom. 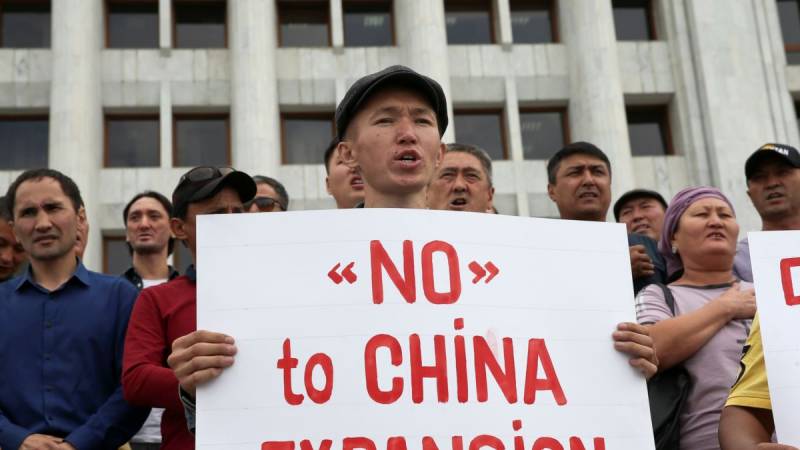 The Kyrgyz are protesting. Source: gdb.rferl.org
The Chinese have long and firmly established themselves in the economic space of Kyrgyzstan. This situation has developed due to the constant upheavals in Bishkek associated with the redistribution of power. Some political analysts speak of a certain Kyrgyz attachment to regular revolutions. Parallel clan wars do not leave the country's economy a chance for any growth. At the same time, the second most powerful country in the East is located, ready to actively invest in Kyrgyzstan. Now, at the very dawn of the next revolution, Bishkek owes Beijing more than $ 4,7 billion, which is about 26% of the country's budget. China is far from Russia and does not intend to forgive loans. For every dollar borrowed, the Chinese take cheap natural resources, since the country has nothing else to pay. In general, Kyrgyzstan is a real economic recipient receiving virtually irrevocable infusions from eleven countries. Even Belarus is investing in Bishkek - an average of 500-600 thousand dollars a year, with the exception of 2015, when Minsk allocated 40 million dollars at once. The most significant donors for the Central Asian republics are Canada (on average more than $ 100 million per year), Great Britain (from $ 1 million to $ 189 million) and even Switzerland - $ 21 million. Russia traditionally holds a special place among investors, but not because it invests a lot (on average - up to 300 million dollars annually), but because since 2013 it has forgiven Bishkek's debts for more than half a billion!

As already mentioned, the main interests of the PRC in Kyrgyzstan are related to energy resources and minerals. In 2002, China and Kyrgyzstan signed an agreement on cooperation in the development of oil and gas fields located in the southern part of Kyrgyzstan. In 2014, China received the right to participate in the development of the Mailuu-Suu 4, East Izbaskent, Changyr-Tash and Chyyrchyk fields. In 2016, the Chinese had plans for the Naryn River, which has serious potential in terms of building a cascade of a hydroelectric power plant. The State Power Investment Corporation considered the construction of the Alabuginskaya HPP with a capacity of 600 MW, the Toguztorouskaya HPP - 248 MW, the Karabulunskaya HPP-1 - 149 MW and the Karabulunskaya HPP-2 - 163 MW. In total, the project costs approached $ 2 billion. At the same time, 100% of the electricity from this cascade of stations would go to the border Xinjiang Uygur Autonomous Region of China, which is experiencing a constant lack of energy. At the moment, the project is definitely stalled due to the constant political fever in Bishkek and the growth of nationalism within the country. 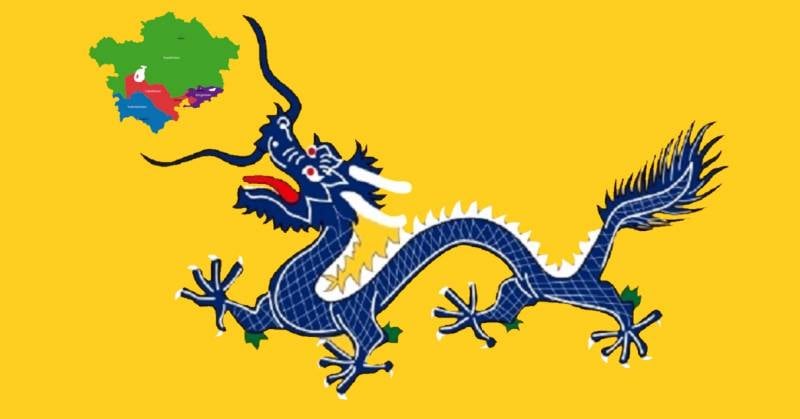 Source: kaktakto.com
The situation when the rich Chinese bought more than a quarter of Kyrgyzstan, flooded the country with their workers, becomes a trigger for nationalist protests. So, at the beginning of 2019, unrest broke out in Bishkek, caused by rumors of harsh treatment of the Kyrgyz in China. According to the protesters, in the Xinjiang Uygur Autonomous Region of the PRC, compatriots are sent to "re-education camps" in which conditions are terrible. Anonymous “witnesses” who painted Chinese reality added fuel to the fire:

“Huge camps have been built in almost every village. Of the detainees, there are almost no those who were released alive. Food is given twice a day and beaten. Due to the fact that the discipline is very strict, many commit suicide. Basically, they run into a concrete wall and die like that. " 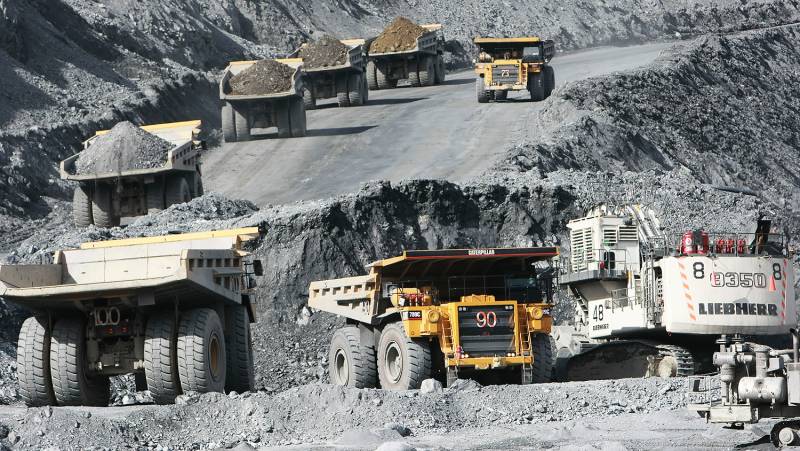 Natural resources are China's main target in Central Asia. Source: gazeta.ru
Chinese industrialists at home are not particularly picky about the methods of developing natural resources, and even more so in economically dependent Kyrgyzstan. Zhong Ji Mining, which is developing a gold mine in Solton Sary, pumped chemical solutions into groundwater last year and caused massive livestock deaths among local farmers. Despite the compensation paid, it came to fights between the mine workers and the youth. Stones were used, several dozen people were hospitalized. And the situation can only get worse in the future: at least 6 Chinese companies are registered in Kyrgyzstan with a population of 400 million. And the indigenous Kyrgyz in search of work have to leave for Russia for several years.

Despite some inconveniences associated with the Chinese expansion, Kyrgyzstan currently has no choice. The budget crisis associated with a deficit of $ 625 million will force Bishkek to seek help from the "big brother" from the East. Already, foodstuffs are rapidly becoming more expensive in the country, the exchange rate of the national currency is falling, and there are no hopes for an early resolution of the conflict in the government. Russia's resources for assistance in this case are seriously limited: Moscow already has enough problems with the second wave of coronavirus, protests in Belarus and the hot phase of the confrontation around Nagorno-Karabakh. Therefore, representatives of the interim government in Bishkek will have to, firstly, make considerable efforts to appease local nationalists, and secondly, create conditions for transparent spending of Chinese money. In this case, economic influence may well turn into a political plane, and the consequences will affect Russian interests in the region.

If Kyrgyzstan still has the potential to get out of the Chinese umbrella, then the issue with Tajikistan seems to be settled. Dushanbe's external debt to Beijing at the end of 2019 amounted to $ 2,9 billion, or almost 60% of the total external debt. The presence of such a generous lender allows Emomali Rakhmonov not to care much about economic reforms and the search for outside investors. At the same time, they have to pay not only with natural resources, like Kyrgyzstan, but with their own land. In 2011, Tajikistan quietly and peacefully transferred 1,1 thousand square kilometers of disputed territories of the Eastern Pamirs to China - this is 0,77% of the total territory. For independent Dushanbe, this was the third stories land transfer act to Beijing. According to experts, the land acquired by China contains 17 types of minerals: uranium, gold, bauxite, asbestos, rock crystal and the like. Tajikistan had neither the funds to develop deposits, nor a special desire to do this, but there were debts to Beijing. Nine years ago, some of this debt was written off, but economic dependence has only increased over time. Moreover, workers from China who are engaged in the construction of Tajik infrastructure facilities are massively migrating to the country. The peculiarity of investments from China is that the locals are attracted to the development of money in the last place - contractors bring their labor to Tajikistan. Local residents are very impressed by the work schedule of the Chinese. A resident of Dushanbe says:

“I was amazed when, early in the morning, I saw many Chinese people in identical uniforms walking quickly in formation through our neighborhood. They walked to the road, where trucks were already waiting for them. It turned out that these are the builders of residential buildings who live in trailers in the parking lot. Nobody noticed them, as they left after dark, at 5 am, and returned by 23 at night. Only then did I understand why a Chinese grocery store had opened nearby. They disappeared after a year. "
The authorities tried to force them to hire locals for such work, but it quickly became clear that they simply could not withstand the Chinese labor regime: a 12-hour day at a very high pace, interrupted only by a half-hour lunch right at the workplace. At the same time, the Chinese often stay in the republic for a long time, continuing to work on leased agricultural land. And it turns out well. In 2016, Chinese harvests were so good that wheat in local markets was worth 1,5 somoni ($ 0,19) per kilogram, while grain produced by local farmers was twice as expensive. By the way, the average lease term of the Tajik lands by the Chinese is 49 years. 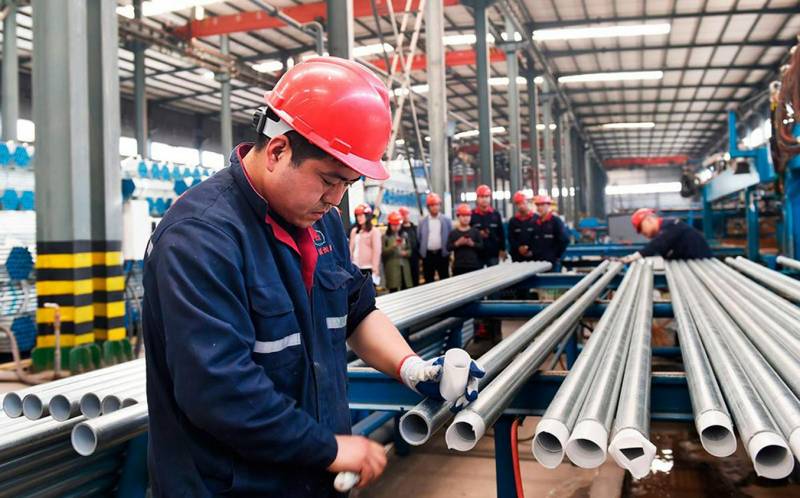 Chinese worker at one of the enterprises in Tajikistan. Source: fergana.agency
The Chinese do not forget to develop the mineral wealth of Tajikistan. In 2019, the Chinese company TBEA began work at the Verkhniy Kumarg and Eastern Duoba gold mines in the Aininsky region, which may contain at least 52 tons of precious metal. And this is just one fragment of the history of "mutually beneficial" cooperation between China and Tajikistan. Since 2007, almost everything that is being built in the Central Asian republic has Chinese roots: roads, tunnels, high-voltage power lines, Dushanbe-2 CHPP, factories (metallurgy, chemistry, cement production) and residential buildings. 60% of all gold deposits are given to Chinese developers. As a result, according to the most conservative estimates, from 100 to 150 thousand ethnic Chinese live in the republic, who are actively employed in agriculture and industrial production.

It is not surprising that China is again thinking about revising the line of the state border with Tajikistan. As you know, journalistic articles do not appear in the Celestial Empire, but act as an element of the state information policy. In this regard, researcher Chu Yao Lu published a material in this regard in August 2020, in which he unequivocally hinted at the belonging of the current Tajik Pamir to China. The author recalled the Qing dynasty, which in the XNUMXth century was allegedly forced to give up part of the mountain range from the empire. Dushanbe has so far reacted sluggishly, in the spirit of "the parties must take the necessary measures to prevent the publication of such materials in the media." Next in line for the fourth alienation of the territory of independent Tajikistan?

Ctrl Enter
Noticed oshЫbku Highlight text and press. Ctrl + Enter
We are
On the border between Kyrgyzstan and Tajikistan, blood is shed againKyrgyzstan is ready to become the fourth member of the Customs Union: who will be in the black?
63 comments
Information
Dear reader, to leave comments on the publication, you must to register.