Turkey will help in the "de-occupation" of Crimea: Zelensky held talks with Erdogan 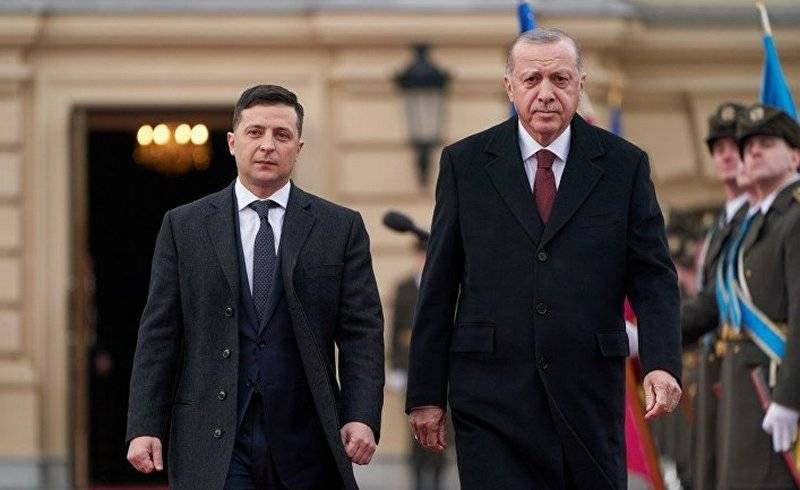 President of Ukraine Volodymyr Zelenskyy paid a working visit to Turkey, where he held talks with Turkish leader Recep Tayyip Erdogan. The visit of the Ukrainian delegation resulted in the signing of a number of agreements between the countries.


According to the Ukrainian media, the main topic of negotiations between Ukraine and Turkey concerned the military-industrial area. The parties managed to sign a memorandum on projects in this area. The office of the President of Ukraine said that the document defines the intentions of the parties to start and implement joint projects for the construction of warships, drones and all types of turbine engines.

In addition, the parties signed a framework agreement defining the areas of cooperation in the military sphere, which includes, among other things, the training of Ukrainian Navy sailors by Turkish instructors.

It was also reported about the signing of a protocol fixing agreements, plans and tasks in the areas of trade, investment, energy, transport and infrastructure, as well as in the field of customs policy. However, as Zelensky said, the main thing is agreements in the military sphere.

It is cooperation in the defense industry that is decisive for the development of our strategic partnership, and I am very glad that today we have made it even stronger.
- said the Ukrainian president at a joint press conference.

Of the other events that accompanied Zelensky's visit to Turkey, several more can be noted.

During a meeting with Erdogan, Zelensky awarded the latter with the Order of Prince Yaroslav the Wise, I degree "for his contribution to strengthening cooperation between the two countries."

In accordance with the decree of the President of Ukraine, the President of Turkey was recognized for his outstanding personal contribution to the strengthening of Ukrainian-Turkish interstate cooperation, support of the independence and territorial integrity of Ukraine
- stated in the message on the Zelensky website.

In addition, Zelensky and Erdogan discussed the settlement of the situation in Donbass and came to the conclusion that the political and diplomatic way of resolving the crisis and the onset of a lasting peace is "the only and correct".

During the talks, Erdogan said that Turkey does not recognize the annexation of Crimea by Russia and will continue to support its territorial integrity as part of Ukraine. Erdogan also announced Ankara's readiness to take part in the de-occupation of the annexed Crimea (the Ukrainian Foreign Ministry and the President's Office are creating the "Crimean Platform"). The Turkish side plans to take an active part in the negotiation process, where Zelensky personally invited her.

It is reported that Ankara expects to take part in the privatization of state-owned enterprises of Ukraine, which will take place in 2021, and the Turks also want to become "investors" in the purchase of Ukrainian land through Ukrainian banks. Zelensky said during a meeting with Erdogan that Kiev is counting on investments of at least $ 10 billion.

Note that within the framework of the National Security Strategy adopted by Ukraine, Turkey has been identified as one of the main strategic partners.

Ctrl Enter
Noticed a mistake Highlight text and press. Ctrl + Enter
We are
Reports from the militia of New Russia for 27-28 September 2014 of the yearAs part of Vladimir Putin’s visit to India, a number of large MTC contracts are expected to be signed.
171 comment
Information
Dear reader, to leave comments on the publication, you must to register.