Barge haulers of Russia and Europe 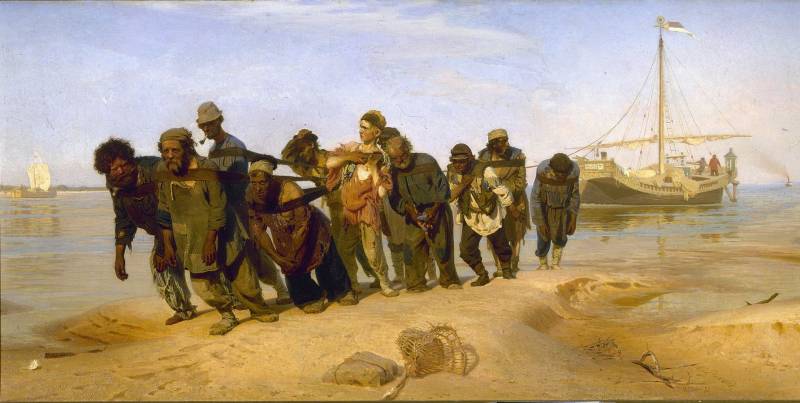 Painting "Barge Haulers on the Volga" by Ilya Repin

Barge Haulers on the Volga is one of the most famous Russian films. Written by the famous Russian artist Ilya Repin, it is familiar to almost every inhabitant of our country from the school curriculum. But on the whole, Russians have a rather vague idea of ​​this profession, which has gone into oblivion. To many, for example, it seems that the barge haulers themselves were an exclusively Russian phenomenon. stories... This is not true. The labor of barge haulers was quite widespread in Europe. The profession existed in many countries of the world and completely disappeared only in the middle of the XNUMXth century.

The events depicted in Repin's painting became a kind of imprint of the history of our country in the XNUMXth century. Undoubtedly, this work belongs to the best examples of fine art and is an example of the rare expressiveness and strength of the Russian realistic school of painting. At the same time, the painting is an important monument of Russian material culture. At the same time, there are people for whom this painting is a kind of symbol of the backwardness of Russia and the impoverished life of the people depicted on it. Especially in contrast to Europe. However, the Russian reality portrayed by Repin was also typical for European states. The barge haulers' profession had no nationality and was widespread in all countries where it was necessary to conduct ships with cargo along rivers and canals.

In our country, burglary as a socio-economic phenomenon arose in the 200th century and existed in one form or another until the first quarter of the XNUMXth century. Burliness or "ship work" in Russia was called various types of work on river vessels, as well as timber rafting. Barge Haulers were a working caste of tugs of various cargo ships on water bodies with the help of twine, which was pulled ashore. A rope was called a very strong rope with a length of about XNUMX meters. Most of all it looked like a rope or cable. 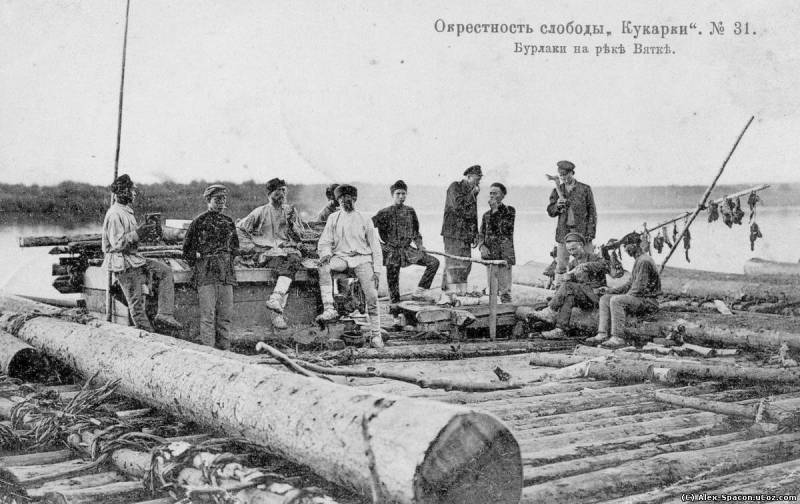 At the same time, this method of escorting ships with the movement of barge haulers along the coast was far from the only one. Another method of wiring was often used, when a large drum was placed at the stern of a ship or barge, onto which a cable was then wound, to which an anchor was attached. Then such an anchor on a skiff / boat was wound upstream of the river, after which the barge haulers sailing on the ship took over. The barge haulers clung to the rope wound with an anchor with their ropes and went from the bow of the ship to the stern, choosing the rope, and at the stern of the ship winding it on a drum. After that, they went to the nose again - and everything started from the beginning. Having completely chosen the anchor, the boat was again brought upstream of the river, and the process was repeated again. Along this rope the barge with the cargo was crawling against the stream of the river.

For such work, horses could also be used, which were transported directly on board. Such barges even had a special name: horse-run barges. The use of horses was often more productive and cheaper, but it was impossible to do without human labor in case of force majeure. For example, if a barge with cargo ran aground, it was easier to pull it from a shallow place with the involvement of people. Therefore, barge haulers were often preferred.

According to only rough estimates, in the middle of the 300th century, from 650 to 4 thousand people were engaged in the burlak trade in our country. At the same time, the Volga became the center of the world burglary by this time. By that time, a huge river fleet had appeared on this strategically important Russian water transport artery. Undoubtedly, in its size, this great Russian river eclipsed all the canals and rivers of Europe. Burlatsky labor was extremely in demand here also because the river was not navigable in all areas and had a slow current (average speed XNUMX m / s). 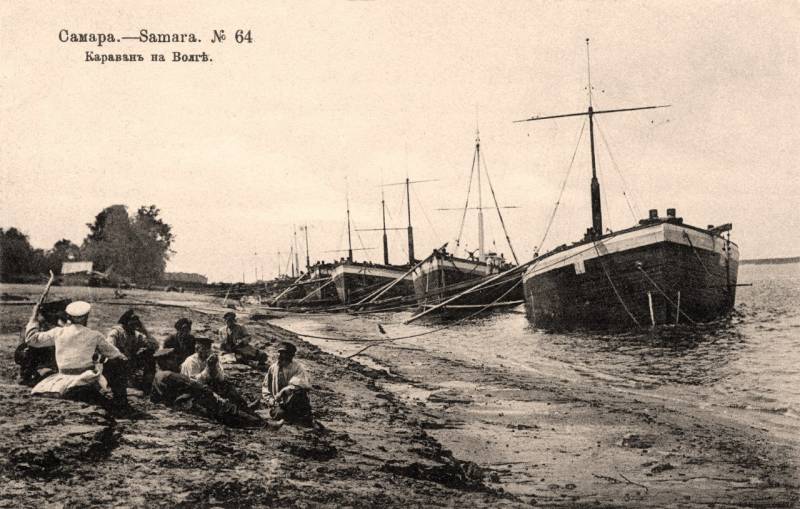 By the middle of the 100th century, on the Volga alone, there were about XNUMX thousand barge haulers. Moreover, about half a million inhabitants and entire settlements located in the Volga region existed precisely due to the presence of burlak artels. Barge haulers not only ensured the movement of ships along the river, but also themselves invested in the economy of the entire region. They sent almost all the money they earned to the economy of the Volga region. In many Volga towns and villages, churches were even built with the direct financial support of barge haulers' artels. The best captains of river vessels and pilots often emerged from the barge haulers. The most intelligent of them could become elders and honorary citizens.

Barge haulers did not disappear either with the appearance of steamships, which were introduced slowly, or with the development of railway transport. Although progress certainly took its toll. Every year and with the development of technology, the share of manual labor when transporting goods along Russian rivers has been decreasing. Already in the second half of the XNUMXth century, steam ships began to outperform the barge haulers. But the railways made an even greater contribution. With the development of a network of railways in Russia, the burlak industry shrank in size more and more. This was primarily due to a significant increase in the speed of transportation of goods. Therefore, gradually the profession began to disappear from the banks of the main Russian navigable river. Having disappeared from the banks of the Volga, she lingered for some time on small rivers, where such work was more in demand. 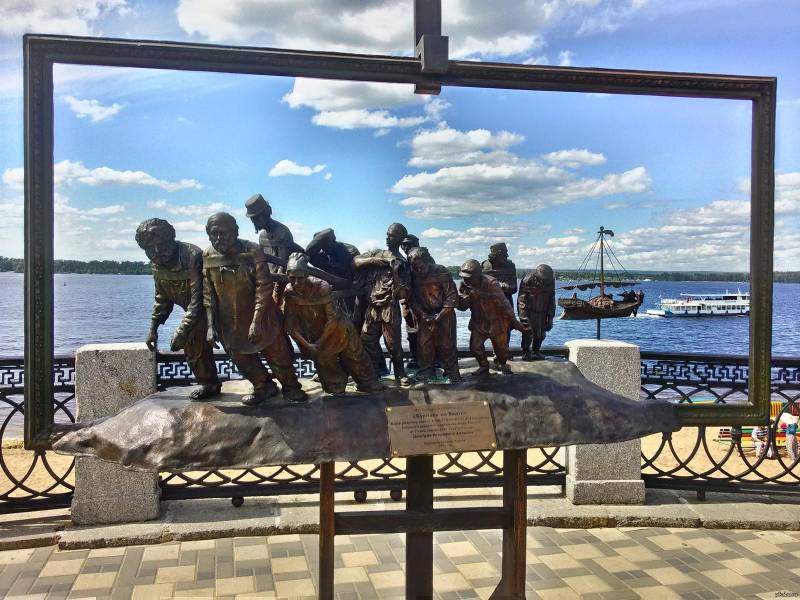 Monument "Barge Haulers on the Volga" in Samara
At the same time, the barge haulers survived the Russian Empire. In the Soviet Union, this work was still used, but on a much more modest scale. Finally, burlak traction as the cheapest type of transport services was banned in the USSR only in 1929 by a decree of the People's Commissar of Railways, in whose direct subordination until 1931 was river transport.

We have already noted earlier that barge haulers are an international profession that existed not only in Russia. Moreover, it is not even only a male profession. Women in both Russia and Europe were often forced to do hard work. The movement of river vessels with the help of manpower along rivers and canals in Western Europe (we are talking about the Netherlands, Belgium, France, and Italy) persisted at least until the thirties of the XX century. In addition to human labor, draft animals were also used to guide ships and barges. At the same time, even important technical inventions, for example, the appearance of steam engines, could not completely replace such labor for a long time.

It was not only Ilya Repin who was inspired by the sight of the barge haulers and the severity of their labor, deciding to paint his famous painting. Italian, Dutch, French and Austro-Hungarian artists left such paintings for us. And in Germany today you can find monuments that are dedicated to barge haulers. In Germany, the massive use of human labor for towing cargo along canals and rivers ended a little earlier than in other countries, around the second half of the XNUMXth century. 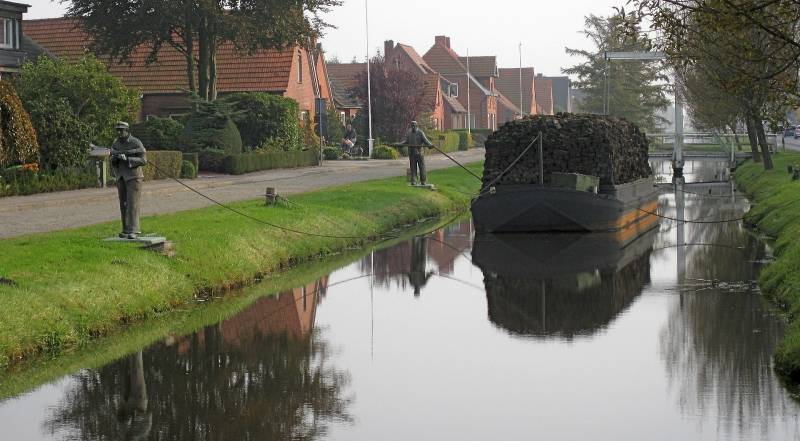 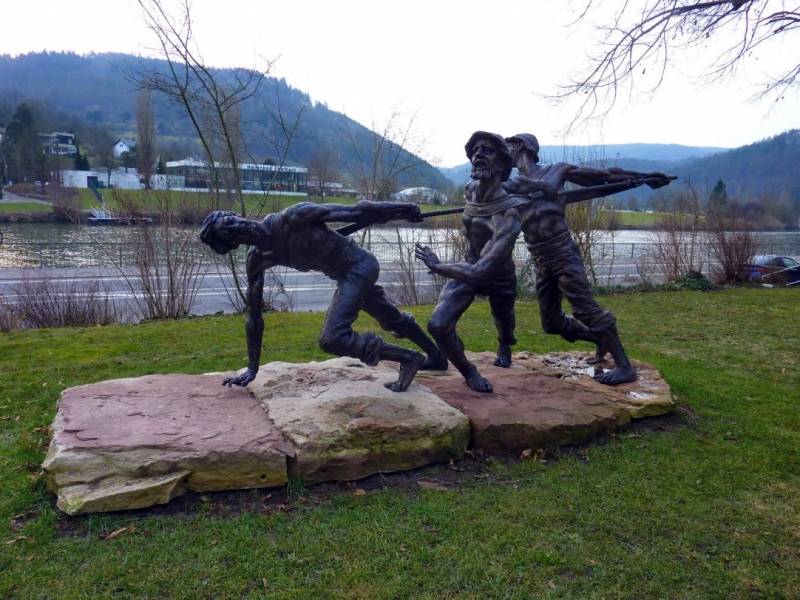 Monument to Barge Haulers in Eberbach, Germany
The closest neighbor of Germany, the Austro-Hungarian Empire, used the labor of barge haulers in a peculiarity. Until the middle of the XNUMXth century, convicts were attracted here on a massive scale. Often the most notorious criminals were attracted to the hard work of towing ships along flat and swampy rivers in Austria-Hungary, who, before the abolition of the death penalty in the empire, would not have expected hard work, but a gallows.

The peculiarity of many Western European countries was also in their geographical size. There were simply no such endless expanses as in Russia. And the rivers, comparable to the Volga, too. In the UK, Holland, France, Belgium and Germany, there were a large number of channels. The size of these channels and their length limited the size of the barges with cargoes being carried, as well as the number of barge haulers that were needed to guide and tow ships. Fewer people were involved to navigate one barge, and towing took much less time. Whereas on the Volga the barge haulers could work on the pilotage of one barge with a load of up to 90 days or even more.

Another feature of Western European countries was that often the captain of a river vessel was also its owner. The ship was his private property, and there might not be a hired crew on board. Often the captain was assisted by members of his own family, who, like him, lived on board the ship. Not in all cases the captain had money for a steam engine and professional sailors-mechanics who could keep it in working order, as well as for stokers. Sometimes there was no money to pay for the services of draft animals. Financial difficulties then and now remain a fairly common phenomenon in human life. In this case, the captain himself, his children and his wife were forced to harness themselves into the strap and tow the ship. 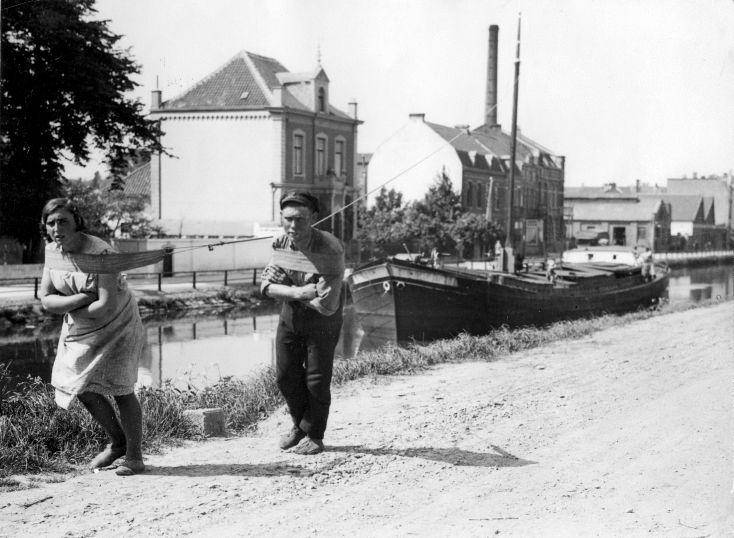 Transporting a ship, Holland, 1931
Burlak power in Europe ceased to be constantly used only in about the 1920s and 1930s. It was used periodically and later, but these were already rare cases. Finally, such work was made irrelevant by the massive distribution of reliable gasoline marine engines, which were easy to use and quite compact.

You can end the story with a comical fact from the recent past. In 2013, the famous French actor Gerard Depardieu escaped high French taxes and received Russian citizenship. Year for the actor turned out to be shock in every sense. In Russia, Gerard Depardieu became an honorary Udmurt, an honorary citizen of the Chechen Republic, and received apartments in Grozny and Saransk. At the same time, the actor acquired a new country house in Belgium, becoming an honorary citizen of the Estempuis commune and ... a barge haule! At an organized ceremony, the actor was presented with a special sling from the Satcheux fraternity, which used to unite local Belgian barge haulers.

Examples of European paintings dedicated to the work of barge haulers: 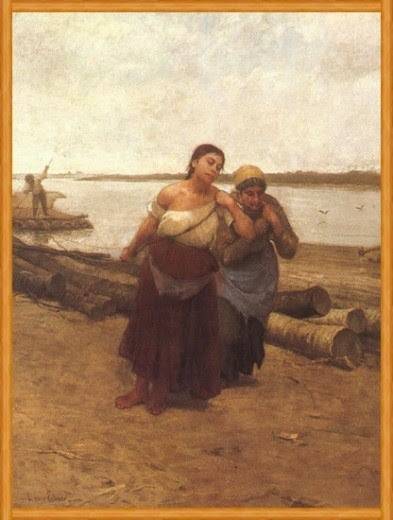 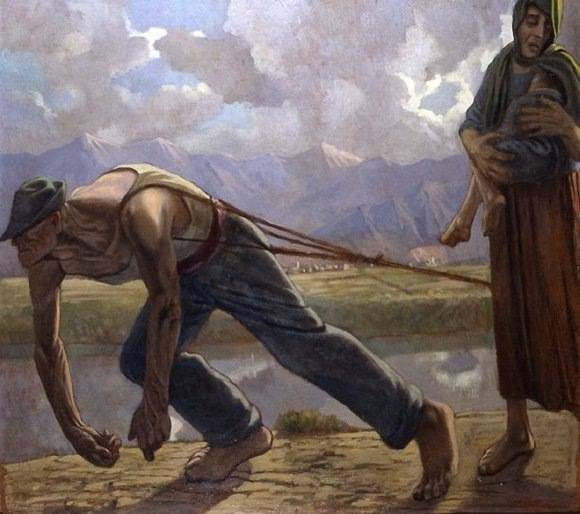 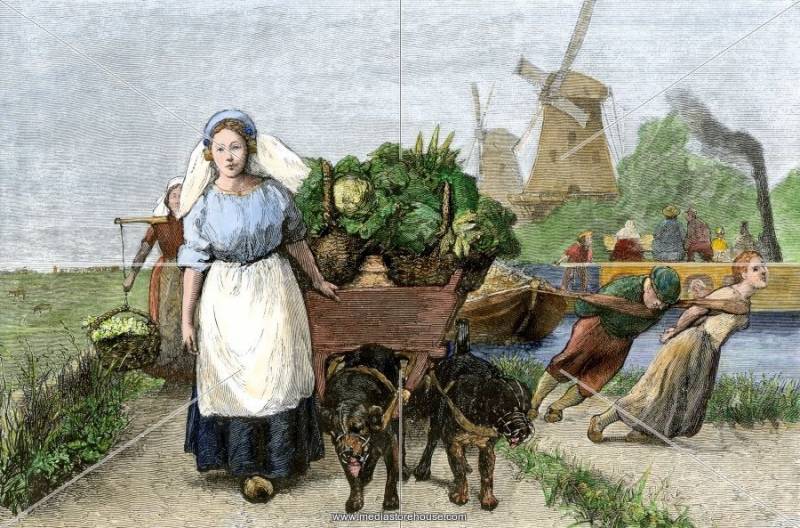 Ctrl Enter
Noticed oshЫbku Highlight text and press. Ctrl + Enter
We are
Painting as a cast with reality or a symbolism based on lies?Passion for Ilya
180 comments
Information
Dear reader, to leave comments on the publication, you must to register.