"March of Pride" in Belarus: Opposition intends to bring security officials to their knees 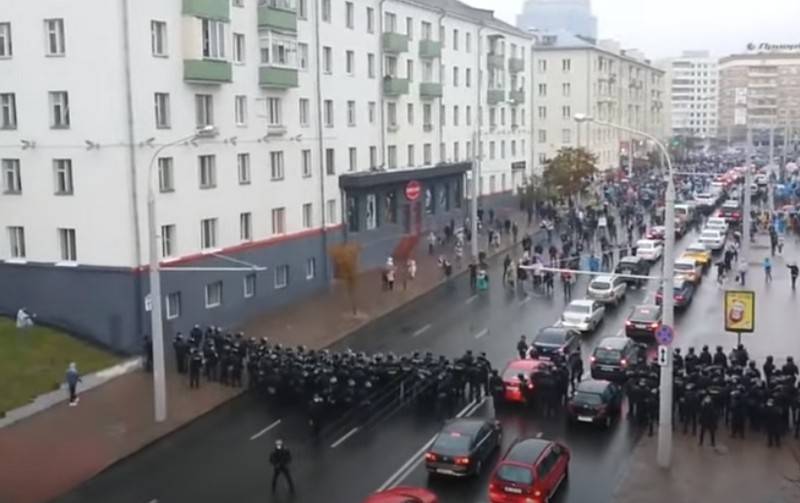 More than 580 people were detained after protests in the cities of Belarus on Sunday, Tikhanovskaya accuses the Belarusian authorities of yet another violence against the citizens of the country, and the opposition intends to bring the security officials to their knees, as it happened in Ukraine.


On Sunday, October 11, the Belarusian opposition held a "March of Pride" in 12 cities of Belarus. In Minsk, the security forces were able to partially prevent this, the militia on Sunday was transferred to an "enhanced regime" of service in connection with calls for unauthorized protest actions.

Protesters in Minsk tried to organize themselves into a column, but all attempts were suppressed by the security forces, which led to clashes. Particularly violent clashes were noted in the area of ​​the Pushkinskaya metro station, where at some point several thousand protesters managed to organize. The security forces carried out harsh detentions of the protesters, who were dispersed using water cannons, stun grenades and pepper gas.

Clashes in the center of Minsk continued until evening, after which the protest action continued in the format of the so-called chains of solidarity. Protesters lined the roads with white-red-white flags.

The leader of the Belarusian opposition Svetlana Tikhanovskaya has already reacted to the dispersal of the "March of Pride", saying that the Belarusian authorities have begun a new stage of violence.

Hundreds of detainees, mass beatings, blood - this is the only response they are capable of. For two months we paid a very terrible price for our freedom. But there are more of us, and we will achieve our goal. You yourself know what to do
- she wrote on the Telegram channel.

Another large oppositional Belarusian Telegram channel "Brain Belarus", commenting on the actions of the security forces, called upon to bring the police officers to their knees, as was the case in Ukraine. In addition, the security officials were promised all kinds of reprisals after the opposition came to power.

(...) it will be very interesting to remember their happy faces when they kneel and beg for mercy from the Belarusian people, as it was in Ukraine after the victory of the people. (...) We will never forgive them, this is impossible to forgive ... Each of them will be condemned in accordance with the law. Houses and apartments bought on credit will be confiscated, the money received from the occupation regime for the war with its people will be taken away and used to restore the country
- said in the message of the Telegram channel.
Ctrl Enter
Noticed oshЫbku Highlight text and press. Ctrl + Enter
We are
“Belarus has embarked on the path of a non-violent revolution” - Tikhanovskaya addressed the European parliamentariansSvetlana Tikhanovskaya left Belarus, moving to Lithuania
312 comments
Information
Dear reader, to leave comments on the publication, you must to register.