The bets on the S-300PMU-2 and the Iron Dome will turn into a complete fiasco for Baku. The unused trump card of the Armenian missile forces and artillery 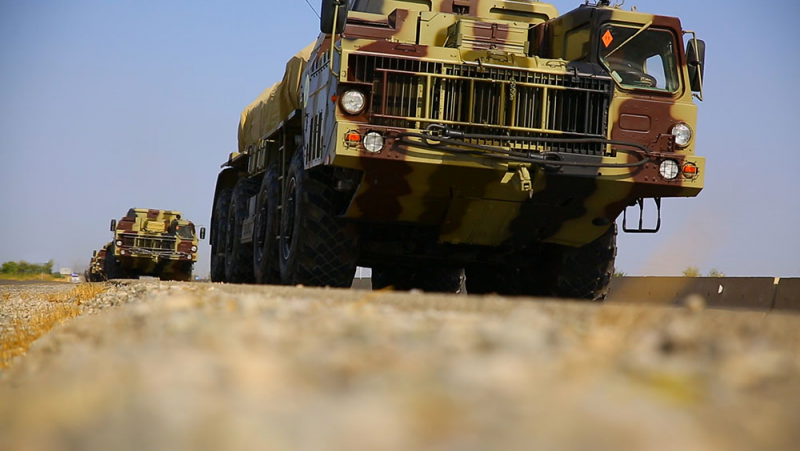 Having carried out a cursory monitoring of numerous Armenian news portals, military analytical "Telegram" -channels "Military Observer", "Armenian Military Portal" and "Operational Line", as well as a review of short video reports of the military leader and author of the "WarGonzo" project Semyon Pegov, who scrupulously documents the consequences of all missile and artillery strikes on Stepanakert from the batteries of cannon and rocket artillery of the Azerbaijan Army, it is quite easy to predict the tendency for the impending complication of the operational-tactical situation in the Nagorno-Karabakh theater of military operations engulfed in a new escalation round.


After all, despite the attempts made by Moscow to call on Mr. Aliyev and his entourage to common sense and initiate the process of diplomatic settlement of the next stage of the age-old Karabakh conflict, as well as on the eve of the readiness expressed by the Prime Minister of Armenia Nikol Pashinyan for a constructive dialogue with Baku, the Defense Department and - still remain unshakable in their desire to continue offensive operations in the western and south-western operational directions of the Nagorno-Karabakh Republic. At the same time, not only preliminarily carrying out artillery preparation with strikes on the fortified areas of the NKR Defense Army, but also deliberately striking targeted strikes on residential areas of Stepanakert and such unique historical objects such as the Cathedral of Holy Christ the All-Savior (Surb Amenaprkich Kazanchetsots). Obviously, the guarantees provided by Erdogan for the comprehensive involvement of the regular Turkish army in the conflict (naturally, at the request of official Baku), as well as the permanently provided military-technical support from Ankara and Tel Aviv, only strengthened the command of the Azerbaijani Armed Forces in the opinion that the above criminal actions will not entail absolutely any consequences.

"Castles in the air" of the Azerbaijan Air Defense Forces command are subject to destruction. Opportunities of the "strategic asset" of Armenia's MFA

In light of the above circumstances, the issue of paramount importance for the missile forces and artillery of Armenia automatically becomes the possibility of delivering effective "decapitating" missile strikes against logistical support points, air bases, fuel and lubricants and ammunition depots and reserve units of Azerbaijan's army deployed in offensive orders, which are located in the operational depth of defense of the order of 120-200 km (outside the range of the MLRS of the Smerch family and operational-tactical ballistic missiles 9M79-1 of the Tochka-U complexes). It is the above countermeasure that is capable of fundamentally undermining the combat stability of the "offensive skeletons" of the regular Azerbaijani army, formed in the vicinity of Nizhny Novgorod. Shukurbeyli and Jebrail villages.

Meanwhile, the maximum effectiveness of such strikes (with the final incapacitation of the entire list of the above objects) can be achieved only in case of successful overcoming of the anti-missile "umbrella" formed over the central and eastern regions of Azerbaijan by long-range anti-aircraft missile systems S-300PMU-2 " Favorite ", Israeli medium / long-range air defense systems" Barak-8 / ER ", as well as Israeli highly specialized medium-range anti-missile systems" Iron Dome "(" Iron Dome ").

The outdated operational-tactical missile systems 9K72 "Elbrus" (the good old "Scud-B" in accordance with the NATO codification), which are in service with the MFA of Armenia, will not be able to oppose anything to the above anti-aircraft missile systems, since the operational-tactical ballistic missiles 8K14M-1 for more than 25 years of operation, they have not gone through a single stage of modernization and still have a very mediocre software guidance system, represented by a lateral acceleration gyro, a gyro-integrator for longitudinal accelerations (range automatic), a gyro horizon and an AS 1SB13 calculating device. The analog architecture and ordinary computing capabilities of the AS 1SB13 inertial-navigation computer, together with a low margin of safety of the power elements of the OTBR 8K14M-1 hull, exclude the possibility of introducing and implementing an anti-aircraft maneuvering mode with overloads of the order of 25-30 units, which turns the Armenian Scuds "Into ideal targets for highly maneuverable missile interceptors 48N6E2, Barak-8ER and Tamir, which are included in the ammunition of the Azerbaijani S-300PMU-2, Baraks and Iron Domes.

As for the "Iskander-E" operational-tactical missile systems, which are "strategic assets" of Yerevan, which entered service with the missile forces and artillery of Armenia in the fall of 2015 in the amount of 12 9P78-1E launchers (standard brigade kit) within the framework of the preferential 200- millionth "defense" loan, the salvo launch of operational-tactical ballistic missiles 9M723-1E will provide a full-fledged "breakthrough" of the echeloned anti-missile shield of the air defense forces of Azerbaijan. Having developed all-rotating tail aerodynamic rudders capable of operating synchronously with 4 two-nozzle reusable solid propellants for pitch control (to increase the angular rate of turn), a noticeably large safety factor of the hulls, as well as advanced digital INS based on high-performance on-board computers, solid-state semiconductor gyros, operational and accelerometers tactical ballistic missiles 9M723-1E are capable of carrying out intensive anti-aircraft maneuvers with overloads of 25-30G on outgoing branches and terminal sections of trajectories, leaving the S-300PMU-2, Barak-8ER and Iron Dome complexes no chance of counteraction. The fact is that the control systems of 48N6E2, Barak-8ER anti-aircraft missiles, as well as Tamir interceptors can boast of the presence of only aerodynamic control surfaces and gas-jet thrust vector deflection systems (OVT), which provide these products with very "viscous" maneuvering with implementation of 35-40G overloads in 0,1-0,2 s, while for intercepting a maneuvering overload with 30 units. OTRK 9M723-1E "Iskander-E" interceptor must carry out an overload of 62-70 units. for a period of 0,05–0,07 s.

Only three types of promising interceptor missiles have similar flight and technical qualities: the domestic 9M96E2 from OJSC MKB "Fakel" (included in the ammunition of the S-400, S-350 "Vityaz" air defense systems and the shipborne "Redut" air defense missile system), the French "Aster-30" from consortium "Eurosam" (included in the ammunition of the SAM / KZRK SAMP-T / PAAMS) and the American MIM-104F PAC-3MSE complexes "Patriot PAC-3MSE", equipped with gas-dynamic "belts" of transverse control engines of impulse action, which provide these missiles with the ability to perform lightning-fast transverse throws on a trajectory with overloads of about 65G.

Fortunately, three years earlier, representatives of the headquarters of the Eurosam consortium on commercial cooperation and export sales could not agree with representatives of the Azerbaijani defense department on concluding a contract for the supply of SAMP-T anti-aircraft missile / anti-missile systems with an impressive ammunition load of several hundred missiles. interceptors "Aster-30", which pose a threat to the Armenian Iskander-E detachments; the latter preferred Israeli anti-aircraft missiles.