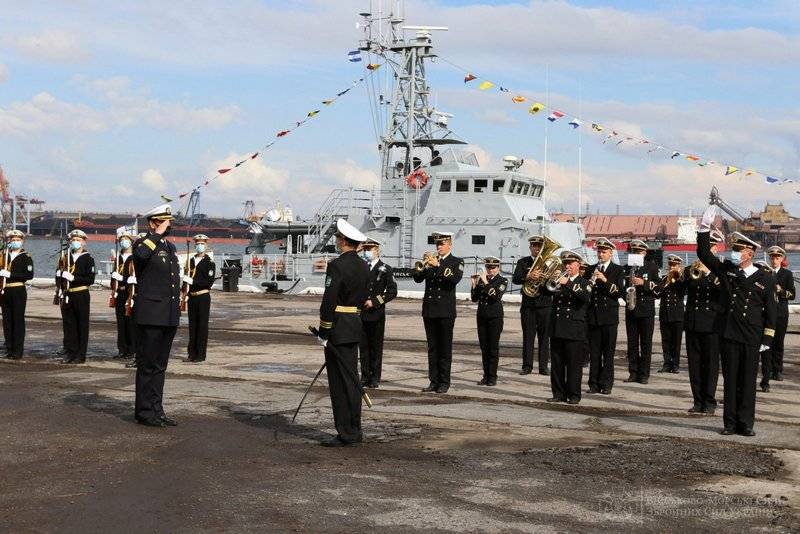 The naval forces of Ukraine received a new basing point. According to the portal dumskaya.net, on October 1, 2020, a solemn ceremony of raising the flag of the Naval Forces of Ukraine took place in the port of Yuzhny over the new base of boats.


In pursuance of the decision of the military-political leadership of Ukraine, today in the port "Yuzhny" we solemnly raise the Naval Flag of Ukraine. This event is evidence of the strengthening of the positions of the Ukrainian fleet and strengthening our capabilities in the Black Sea. (...)
- said the commander-in-chief of the Naval Forces of Ukraine Alexey Neizhpapa.

As stated, patrol boats of the Island type - P190 "Slavyansk" and P191 "Starobelsk", received by Ukraine from the United States, will be based in "Yuzhny". In the future, the command of the Ukrainian fleet plans to deploy a division of boats of this type in this port, after the United States will transfer three more Island-class boats to Ukraine. Crews are currently being trained for them.

It is planned that these boats will significantly increase the combat capabilities of the Ukrainian Navy in the Azov-Black Sea region.

So far, the patrol boats "Slavyansk" and "Starobelsk" are located at the berth of the Ukrainian Scientific Center for Marine Ecology, but in the near future it is planned to purchase a floating berth PZh-61U, which will be manufactured in Kherson at the Pallada plant. The new berth can accommodate four Island class boats, "Gyurza-M" and "Centaur".
Ctrl Enter
Noticed oshЫbku Highlight text and press. Ctrl + Enter
We are
Reports from the militia of New Russia for 27-28 September 2014 of the yearDecember 2010 years. Russian March. Senseless and merciless? Notes not a Russian person
50 comments
Information
Dear reader, to leave comments on the publication, you must to register.