Soviet military industry through the eyes of German intelligence 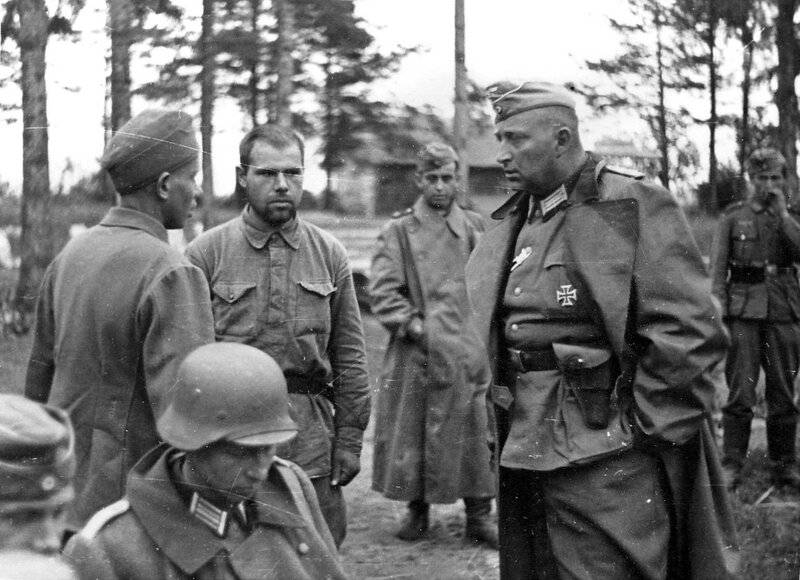 Thanks to the preserved documents, we have the opportunity to look at the Soviet military industry through the eyes of the Abwehr. The intelligence department of Army Group Center systematically interviewed prisoners of war and defectors about various military enterprises and facilities, taking particular interest in their location on the ground and in cities. As a result of these efforts, among the trophy documents of Army Group Center, a rather plump folder remained, which contained interrogation protocols, summarizing extracts, as well as diagrams and maps drawn up on the basis of stories (TsAMO RF, f. 500, op. 12454, d. 348).


The documents were collected within a little over a year, from the beginning of the war until September-October 1942. The geography of the objects of interest to the Germans turned out to be very extensive: Gorky, Penza, Kineshma, Ivanovo, Zlatoust, Kolomna, Yegoryevsk, Chelyabinsk, Ryazan, Yaroslavl, Ulyanovsk, Kuibyshev, Magnitogorsk, other cities, even Khabarovsk.

Judging by the content of the documents and the diagrams attached to them, the Abwehr was more interested in the location of military facilities and enterprises on the ground than in their detailed description. In the diagrams, landmarks on the ground were necessarily indicated, sometimes directions and distances on them. In principle, the drawn up schemes could already be used to orient the bomber pilots and prepare an air raid on them. 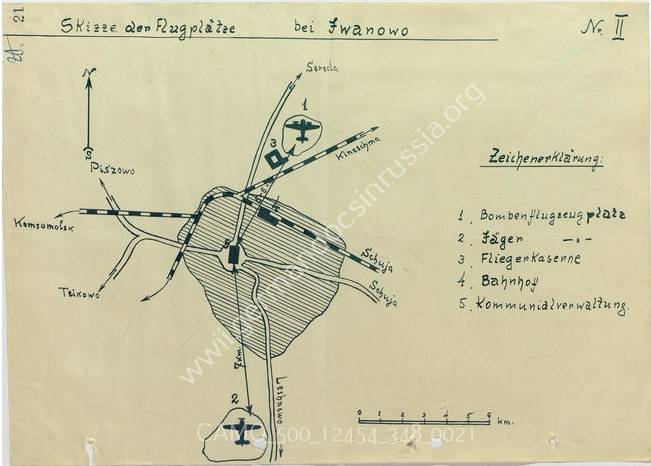 Here, for example, is a diagram of airfields near the city of Ivanovo with landmarks, azimuths and distance to targets: TsAMO RF, f. 500, op. 12454, d. 348, l. 21
In addition, the information received was often passed on to the command tank groups, since in the German army at the beginning of the war there was an order when the offensive of tank units could be directed at important military-economic facilities. Then the tankers had to know exactly where in the city and the surrounding area important objects are located that need to be taken under control.

It is interesting that in this case there is no data on the cities and enterprises that were actually captured in 1941-1942. Apparently, this folder contained information about the military industry and the objects of those cities that were still supposed to be attacked, while information about the cities that had already been captured was removed from it. Thus, we have in front of us the preparations for the future offensives of the German tankers, which never took place. The scouts from Army Group Center were most interested in the Middle and Upper Volga and Middle Urals.

The content of the information that became the property of German intelligence was highly dependent on the informants. Some of them tried to lay out everything they knew. Here is one of the most striking documents in this case - a copy of the translation of the interrogation of Nikolai Menshov, dated August 5, 1941 (TsAMO RF, f. 500, op. 12454, d. 348, l. 166). The protocol begins with Menshov's strongest statement: "Da ich tiefen Hass gegen das bestehende jüdisch-sowjetische Regimehege, strebte ich mein ganzes Leben danach, mit der deutschen Abwehr (Gegenspionage) in Verbindung zu treten." That is, all his life (born in 1908) he strove to enter into ties with the German Abwehr because of his deep hatred of the defenders of the "Judeo-Soviet" regime. This phrase is rather strange, since the "Judeo-Soviet regime" is a typical stamp of German anti-Semitic propaganda. It can hardly be assumed that the translator added something from himself; rather, he reflected the phraseology of the defector. But where could Menshov get all this, if he spent only a little time at the front and soon after the transition ended up in German intelligence? It can be assumed that he had connections with the Germans even before the war, and from them he learned anti-Semitic propaganda, especially since the content of his stories allows one to think so. 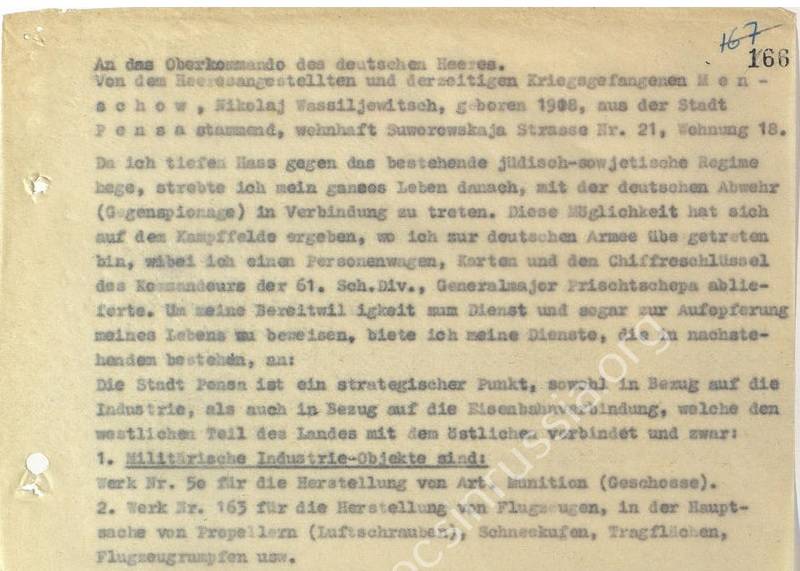 The beginning of the interrogation protocol of Nikolai Menshov, which sets out the circumstances of his transfer to the Germans: TsAMO RF, f. 500, op. 12454, d. 348, l. 166
Menshov lived and worked before the war in Penza and, apparently, immediately after the start of the war, he was drafted into the army. This is not surprising, he was 33 years old. He not only ran to the Germans, but did it in a passenger car, with maps and codes of the commander of the 61st Infantry Division, Major General Prishchepa.

German documents are best compared with other sources for the various facts mentioned in them. The 61st Rifle Division was indeed formed in Penza and from July 2 to September 19, 1941 was part of the active army, as part of the 63rd Rifle Corps. The division commander was indeed N.A. Prishchepa, who was promoted to major general on July 31, 1941. That is, Menshov fled to the Germans at the very beginning of August, perhaps on 2-3 August, not later and not earlier. The division at that time defended itself in the Zhlobin area, and on August 14 the Germans launched an offensive, on August 16 they surrounded almost the entire 63rd Rifle Corps on the western bank of the Dnieper and destroyed it almost completely. Apparently, Menshov stole very important cards that allowed the Germans to prepare this offensive and defeat.

What did the defector list from the military installations in Penza? 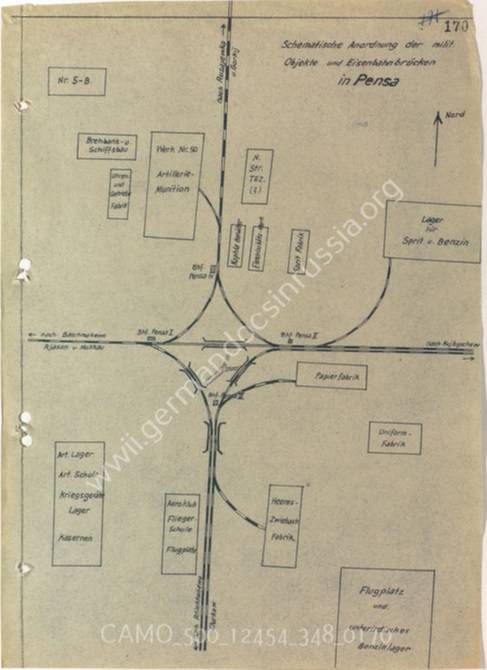 The layout of objects in Penza, compiled according to the testimony of Nikolai Menshov: TsAMO RF, f. 500, op. 12454, d. 348, l. 170
Having listed a total of about 30 military and important economic objects and even drawing up a diagram of their location in the city in comparison with the railway lines, Menshov also offered his services as a recruiter of agents for organizing arson and explosions at factories, power plants and warehouses in Penza. It's hard to say what came of it; it is possible that elsewhere documents will be found about how the German intelligence reacted to such a proposal and what happened to Menshov later.

Why do I think that Menshov was associated with the Germans before the war? Well here's a simple question. Can someone offhand list and plot three or four dozen important objects in their city? He not only listed, but also knew about an object that is not talked about at every corner - the plant (in fact, the workshop) 5B, a division of the bicycle factory, which assembled the fuses. It can be assumed that he was collecting information and someone could lead him, for example, a German agent.

The next история - Protocol of interrogation of political instructor Nikolai Katonaev (3rd company of the 2nd battalion of the 23rd airborne brigade). The 23rd Brigade landed on the night of May 26, 1942 in the forests between Dorogobuzh and Yukhnovo, then captured the village of Volochek, about 56 km southeast of Dorogobuzh, then fought surrounded on May 27-28, and escaped on the night of May 29 and left in a southeast direction through a remote wooded and swampy area. Somewhere between May 29 and June 2, political instructor Katonaev turned out to be with the Germans, as it is written in the document, he fled to the village of Ivantsevo, 34 km west of Yukhnov. The circumstances, however, are unclear. Either he fell behind his own people and lost his bearings, or deliberately broke away to go over to the Germans; it is not clear enough from the document. The protocol itself is dated July 31, 1942, which rather indicates that Katonaev was taken prisoner by accident, he was in no hurry to cooperate.

Once in captivity, political instructor Katonaev told a lot and in detail, in particular about the shops and production of the Kineshemsky chemical plant named after. Frunze (plant No. 756 of the USSR People's Commissariat for Chemical Industry). He listed in some detail the products of the plant: sulfuric acid, formic acid, nitrobenzene, saccharin, smokeless powder, and, probably, drew a sketch of the location of the workshops, on the basis of which the German headquarters officer drew a carefully executed diagram. This diagram also shows grain warehouses and flour mills, which were described by another prisoner of war, quartermaster 2nd rank Kuznetsov (TsAMO RF, f. 500, op. 12454, d. 348, l. 29-31). 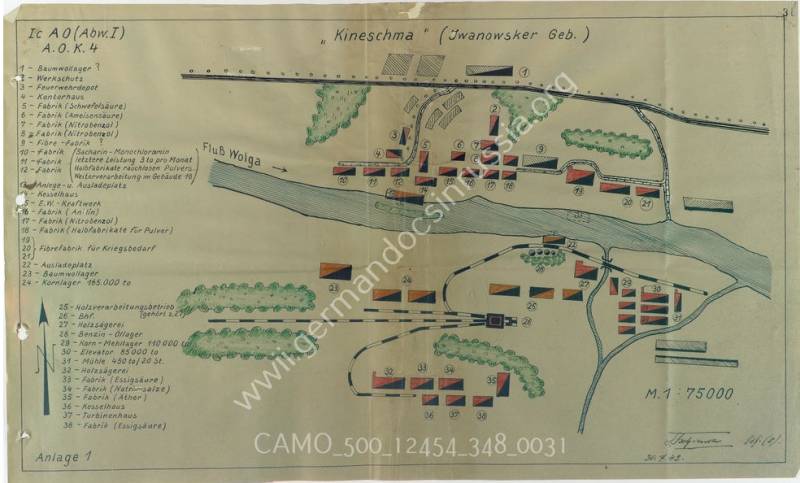 No guarantee of reliability

In the folder of documents on information about military factories received from prisoners of war, there were several more similar reports. However, it must still be emphasized that out of the millions of Soviet soldiers and officers who were captured, only hundreds could say something about any military enterprise or important facility. For example, a defector from the 76th Infantry Regiment of the 373rd Infantry Division on May 20, 1942 (at that time the division was fighting for Sychevka near Rzhev), who was not named in the document, spoke about ... Khabarovsk. He enumerated railway stations, bridges, an airfield through which it was supposed to ferry American planes (TsAMO RF, f. 500, op. 12454, d. 348, l. 63). For the Germans, this information was not of practical importance, but they filed an extract from the interview of the defector with a diagram into the folder of intelligence materials.

Of these hundreds, only a few could characterize any military plant or an important facility deployed and provide details about it. However, even the most detailed story did not guarantee that the prisoners of war and defectors tell truthfully and accurately. Here and there in the reports of the Abwehr comes across a real fantasy. For example, on November 23, 1941, the Abwehrgroup I drew up a report that prisoners of war told about a huge underground storage of explosives 50 km east of Kaluga, on the banks of the Oka, between Aleksin and Petrovsky. As if it employed 80 thousand workers, including 47 thousand penalties (TsAMO RF, f. 500, op. 12454, d. 348, l. 165). And as if a railway leads to this warehouse, going underground, and it is also connected to the Oka by an underground channel. The Germans were not in the least embarrassed by this: they drew up an extract, signed, stamped “Geheim!”, Apparently deciding that when they get to this place, they will see if this warehouse actually exists or not. 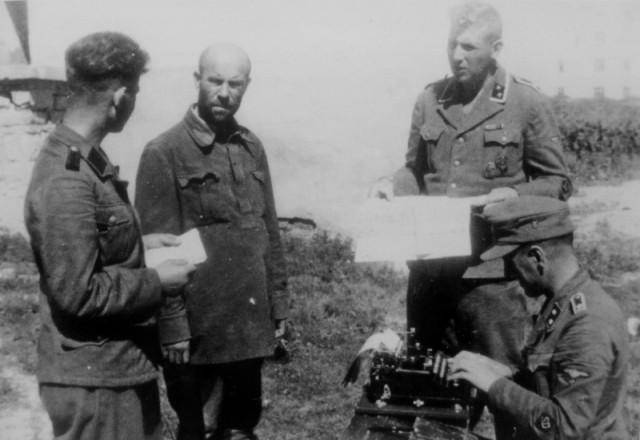 This is not an Abwehr, but SD, as can be seen from the patch on the sleeve of the Oberscharführer typing. Detailed protocols of interrogations of prisoners and defectors were drawn up, most likely, in something like this.
The Germans were not embarrassed by this, obviously, for the reason that they were not faced with the task of collecting detailed and detailed data on the work of these military enterprises, on production output, capacities or detailed data on military facilities. It is quite obvious that such knowledgeable persons may be among the prisoners of war by accident and there will be literally a few of them. They focused on establishing the location of military enterprises and facilities, which would be useful in the planned hostilities.

Ctrl Enter
Noticed a mistake Highlight text and press. Ctrl + Enter
We are
Thunderbird revolution. Maksim GorkyMyths of the Great Patriotic. Why did the Stalingrad prisoners die?
43 comments
Information
Dear reader, to leave comments on the publication, you must to register.