Everyone sees: the gods themselves, in their earthly appearance, patronize the young pharaoh. Scene from the movie "Pharaoh" 1966

Long way to the national flag ... Who in childhood has not heard this song from the movie "Timur and his team"! But what color is proposed to impose flags on rifles? For example, we can not guess, because we know that it is red. But why? This question is closely related to the concept of "national color" or colors, but what is the reason for their choice, who chooses them and by what criteria? Let us recall that the Chinese philosopher Kun-tzu, who at one time put forward the idea of ​​a "correct state", spoke of the importance of maintaining certain traditions in it. Actually, people understood this perfectly and so, as the thousand-year история maintaining statehood and power with the help of various emblems. In ancient Egypt, for example, before the pharaoh appearing in public, as well as before his army, they carried gilded symbols of deities, his patrons, the insult of which was punishable by death.

In ancient Rome, images of the gods in front of the army were no longer tolerated, but signs were used that symbolized military valor and the personality of the emperor himself. The main sign was the aquila (eagle of the legion), which played the role of the banner of the legion and its most revered shrine. The loss of the "eagle" led to its disbandment and was considered the height of dishonor. In addition to the eagle, a red cloth with an embroidered gold inscription was fixed on the aquila on the crossbar: SPQR (Senatus Populusque Romanus, “Senate and the Roman people”) - another symbol of the sovereign Roman consciousness.

The sign of maniples, cohorts, centuries or horse turms was also a signum, which was a staff with disks fixed on it, crowned with the image of a palm - a symbol of allegiance to the oath.

The imago sign was a chased image of the emperor and appeared already in the era of imperial Rome. He embodied his visible image and was an object of worship.

The sign of the cavalry was the image of a dragon (drako) - a direct borrowing from the Sarmatians and Dacians, and howling during the jump due to the air passing through it. Here, as we see, there was a direct foreign influence, which the Romans did not disdain at all.

A woven cloth, suspended on a spear shaft horizontally, that is, a standard, was also called by the Romans Vexillum. This banner was simpler and was mainly used by veteran units. 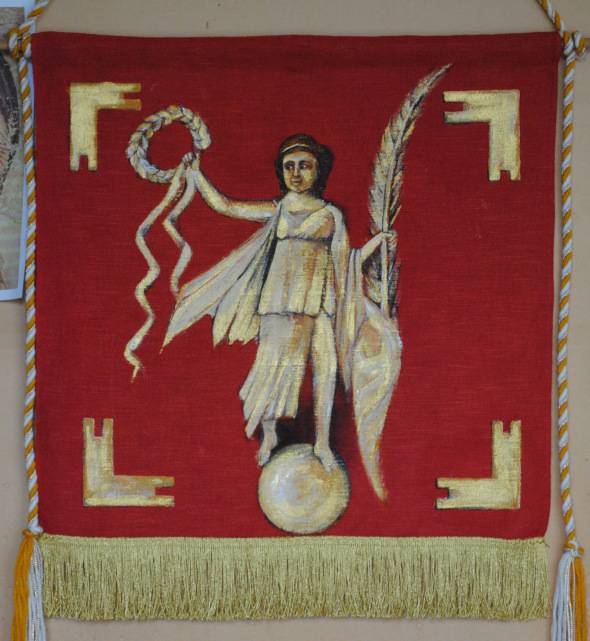 Modern reconstruction of the Roman 'Victory Vexillum' based on a find at Dura Europos
Labarum is the same vixilum, but with Christian symbolism, the “christogram” of the letters Χ (chi) and Ρ (ro) crossed with each other. 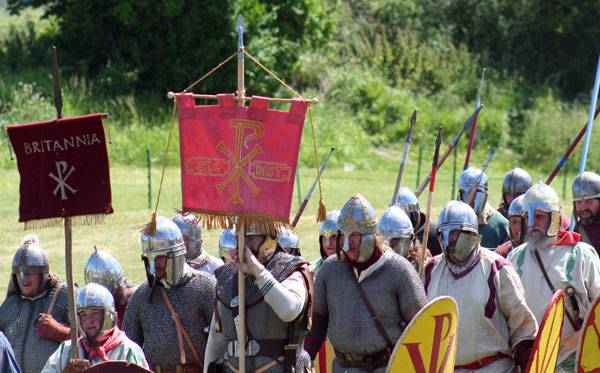 Reconstruction. Modern "Roman troops" of the era of the decline of the empire carry labarums
The barbarians who defeated the Roman Empire borrowed from it not only Latin and Christian doctrine, but also many ideas regarding state symbols. And, in particular, these borrowings concerned the symbolism of flowers, which, however, also came to us from time immemorial.

The fact that each color in its own way affects human emotions, its perception of the world and even health, people noticed a long time ago. Although our ancestors used different colors and shades quite intuitively, they did it in ancient times, investing in them a well-defined semantic meaning. Three ancient colors: white, red and black. Over time, the color palette expanded, and color preferences were largely associated with the temperament of people, and that, in turn, with the climate of the lands where they lived. Temperamental southerners turned out to be prone to red, black and yellow colors. But the peoples of the northern regions are most comfortable with blue and white, cold shades.

But we are now talking about the Christian color symbolism that was used everywhere after the collapse of the Roman Empire in Europe, since it was she who formed the basis and colors of all European state flags. So, white in Christianity is nothing more than God's heavenly radiance (God's light, the light of faith), and it symbolizes purity, innocence, joy and festivity, it is not for nothing that the Gospel speaks of the white clothes of the angels of the Lord. On Mount Tabor, Jesus' robe also turned white during his transformation. The symbol of the spirit of the saint is a white dove, the Virgin Mary is a white lily. And it was not for nothing that the banner of Joan of Arc was exactly white, like the royal banner of France, strewn with golden white lilies.

Accordingly, the color red symbolizes divine power and love. In the church, it is formerly a symbol of the atoning blood shed by the Savior. The priests also put on red (along with white clothes) during Easter Week, Trinity days, the memory of the Holy Cross and holidays in honor of the evangelists, holy apostles and martyrs.

Black color in Christian culture, be it East or West, is “the abyss of sin and hell” and also a symbol of mourning.

But green is a symbol of life, rebirth, hopes, but also temptation (not without reason green eyes are attributed to Satan). At the same time, it is the color of the Grail, which, according to legend, was made of a solid emerald, as well as the life-giving cross of the Lord. Green robes are usually worn by clergymen on the days of simple liturgies. 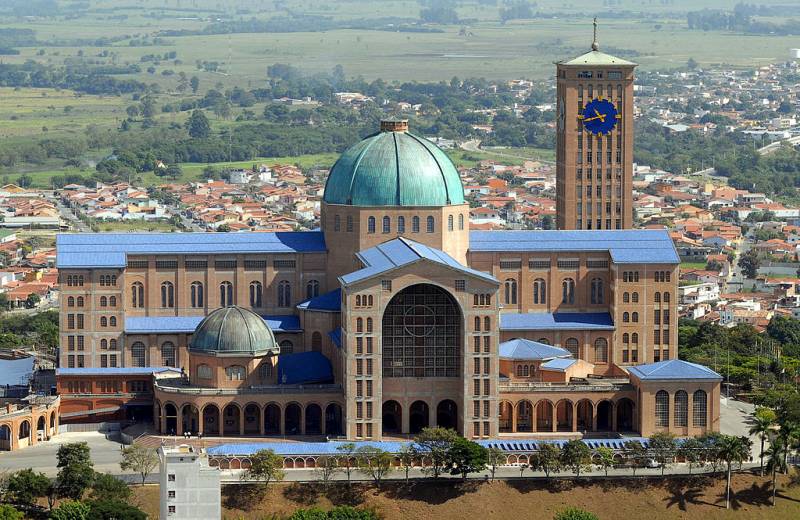 Basilica of Our Lady of Aparecida (Sao Paulo), Brazil with blue domes. This temple houses the main Catholic shrine of this country.
Blue and blue are, of course, the colors of heaven, as well as a miracle of God, and in addition they are associated with the image of the Virgin, which is why the Virgin Mary is usually depicted in a blue cloak on frescoes and icons. But on icons, as a rule, she is depicted in a purple (dark red, cherry) veil, over clothes of dark blue or green colors. This is due to the fact that purple robes, crimson robes, along with gold ones, were considered the clothes of kings and queens. Therefore, the colors on the icon in this case emphasize that the Virgin Mary is the queen of heaven. But here, too, there is a certain subtlety: in Western Christian art, the lower vestments of Mary were depicted mainly in red, and the upper ones in blue, as a hint that her human essence was covered with divine blue. But in the Eastern Christian tradition, everything is just the opposite - the lower blue color is a symbol of her divine essence, while the upper red robe emphasizes her humanity.

Purple and violet are also primordially sacred colors, symbols of God himself. It is not for nothing that only the highest church hierarchs, for example, bishops, could dress in purple and purple robes. The purple mantle is the garment of cardinals who carry the fire of faith and are constantly ready for martyrdom.

Yellow, or rather, gold, is a sign of eternal light, greatness, divine power, strength and glory, as well as the Holy Spirit and ... divine revelation. That is why, for example, in Russia, church domes were usually covered with gold leaf and the frames of images were decorated with it. It is believed that liturgical robes made of gold brocade can replace any others and are especially appropriate as festive vestments.

Of course, very soon all these church symbols migrated to secular heraldry, where only a slightly more secular character was given to its flowers. Since many kingdoms in the Middle Ages chose heavenly saints as patrons, their emblems immediately fell on their flags and coats of arms, and the colors immediately turned into national ones. For example, in England St. George (Georg) is symbolized by a red straight cross on a white field, but it is also present on the flags of Georgia, Genoa, Ulster and even Barcelona, ​​and it is always found in the coats of arms. 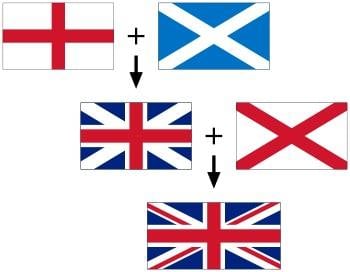 Many crosses - many flags! And then they ended up on the same panel in such an interesting way!
An X-shaped red cross on a white background (in heraldic language - a scarlet cross on a silver field) is a symbol of the patron saint of Ireland, St. Patrick and one of the symbols of Ireland itself, although controversy about his origin has not ceased to this day. 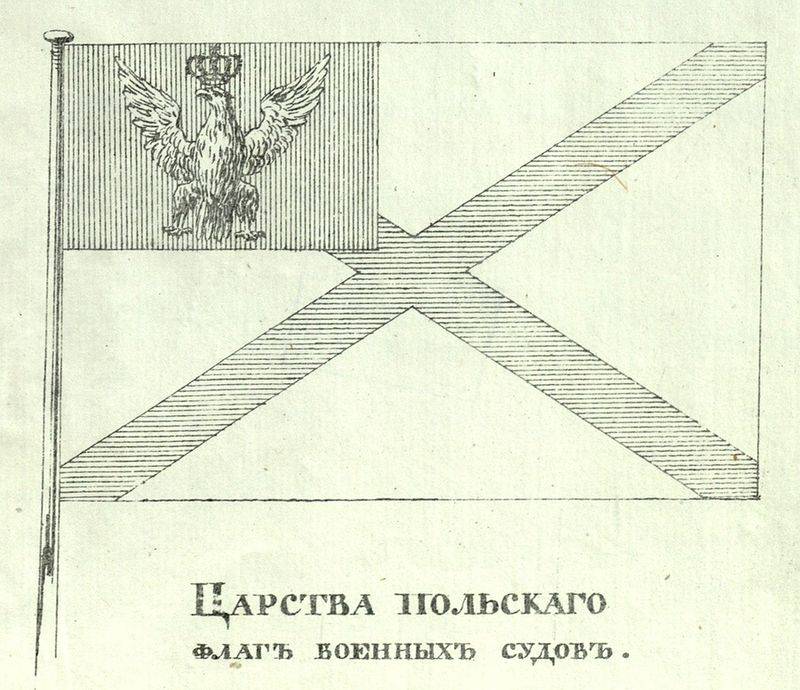 Polish flag from 1815 to 1833
When Britain united in the United Kingdom of Great Britain and Northern Ireland, the three crosses of the states that entered it were simply inscribed one into the other, and this was a very convenient precedent in the history of heraldry. Although the first flags of the Commonwealth were not at all the same as they are now! 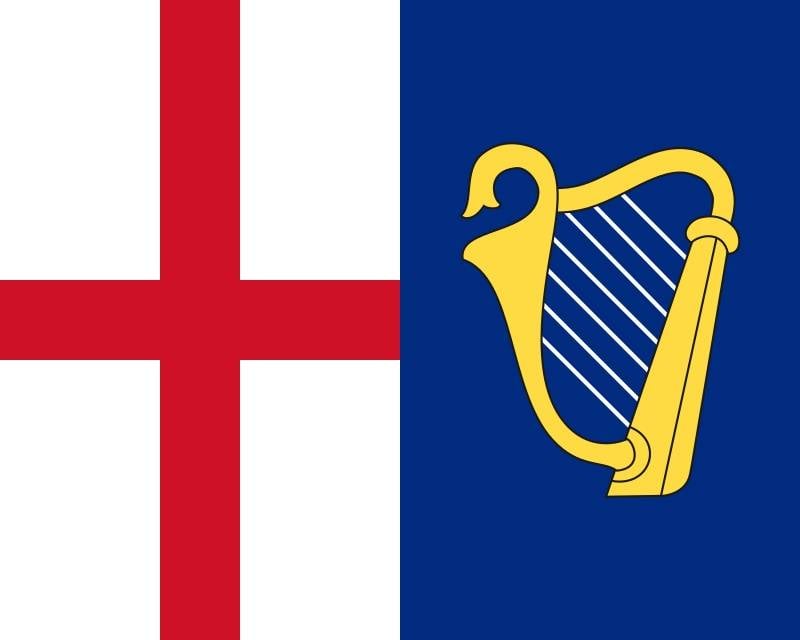 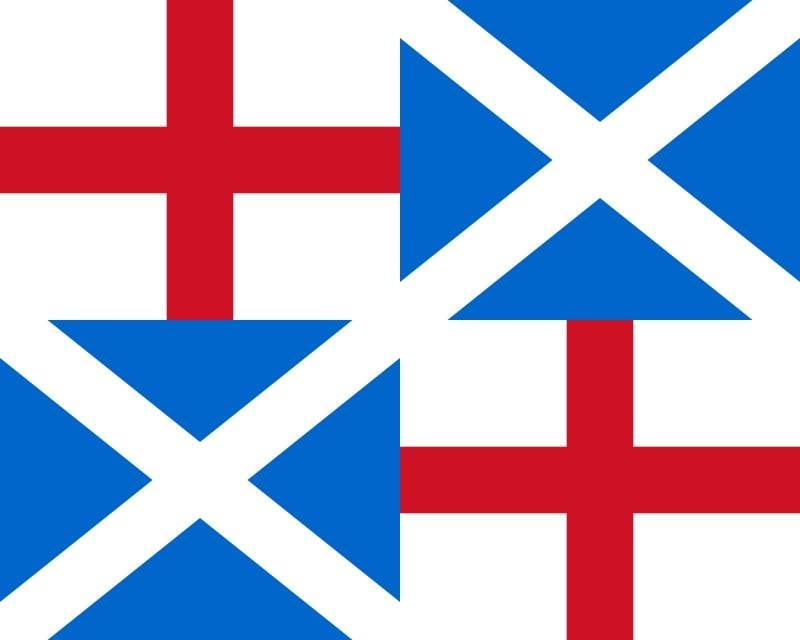 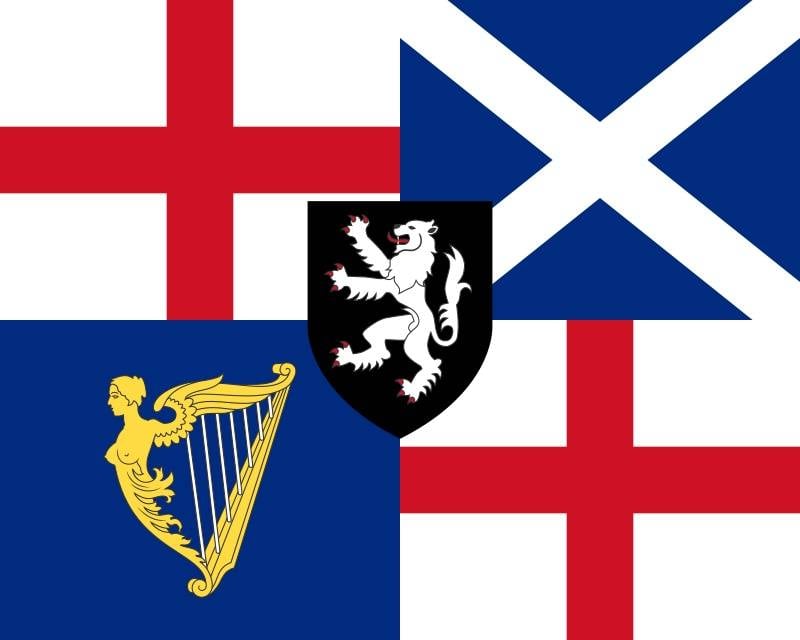 Oliver Cromwell's standard 1653-1659
So even in Great Britain the path to a single national flag was quite long and difficult, what can we say about the flags of many other European countries with a much more dramatic history! 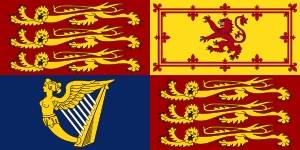 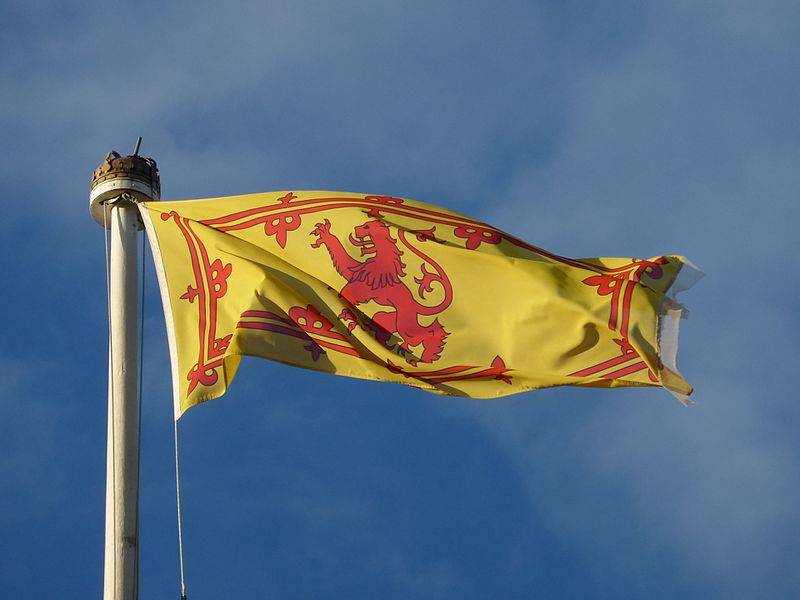 This royal standard rises above the royal palace in Scotland. After all, what could be stronger than traditions, and isn't it obvious that yellow and red are the national Scottish colors, since they are reflected on the flag of national importance! 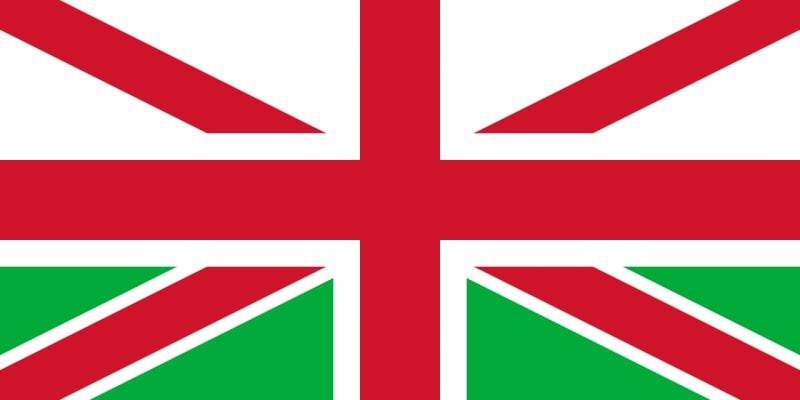 But this may well become the flag of Great Britain in the event that the Scots leave the Commonwealth and begin to live on their own ...
Let's look at it on the example of such states as Italy and Russia - ancient, for a long time mainly agrarian, sufficiently multinational and have gone through a very long path of state formation. And starting with Britain, next time we will tell about Italy, especially since quite recently a very interesting discussion began on VO about the history of the national flag of Italy and its national colors. Then it will be Russia's turn.

Ctrl Enter
Noticed oshЫbku Highlight text and press. Ctrl + Enter
We are
Chernobyl notebook. Part of 3Father told
114 comments
Information
Dear reader, to leave comments on the publication, you must to register.