The history of the creation of one little-known product

Epigraph to this stories could serve as an ironic comment found on the net: "In what year did you begin to make such happiness?" The review referred to the product, which is known in narrow circles under the name "Solar portable battery BSP-1". Product specifications can be found on this forum, however, the author erroneously indicated there that "the charge current is about 95 mA when the voltage changes from 10 to 13,8 V". This is the current for charging sealed storage batteries 10NKGTs-1d. The maximum charging current was 2 A for the product 10NKP-6c Belt, although in certain situations the current could be 10-15% more.


We'll have to start from afar to understand why this product was created and what it was intended for, why its general customer was the GRU General Staff, and why strict requirements were set for the product according to the highest group 1.14 of Soviet GOSTs.

In the 60s and 70s of the last century, various revolutionary uprisings constantly took place around the world, as well as a series of coups d'etat, which greatly complicated the work of Soviet diplomatic missions abroad, especially in Africa, Asia and Latin America. An example of such events is the military coup in Chile or the capture of the US embassy in Iran in 1979. This makes it clear how unstable the situation was in some regions.

Usually, such coups began with a disconnection from the electricity and communication systems of our foreign missions, after which the embassy short-wave radio station with a capacity of up to 0,4 kW stopped its work and communication with the Center was lost. If there was an emergency gasoline electric generator, then the fuel reserves were usually not enough for several days, because there were strict restrictions on the storage of fuel and lubricants in the embassy building. For example, in Iran, at the American embassy, ​​all fuel supplies were destroyed almost immediately, although they were stored in a buried tank, but the attackers knew where it was located and quickly spoiled the fuel with the help of "chemicals" (rumored to be almost washing powder). In such situations, our embassy's radio operator-encryptor did not have any opportunity to contact the Center at the main HF radio station, which is why a low-power correspondent radio station of the R-353 type ("Lun", "Proton" or others) was used as a reserve, which made it possible to organize communication on routes up to 4 thousand km or more under favorable conditions. 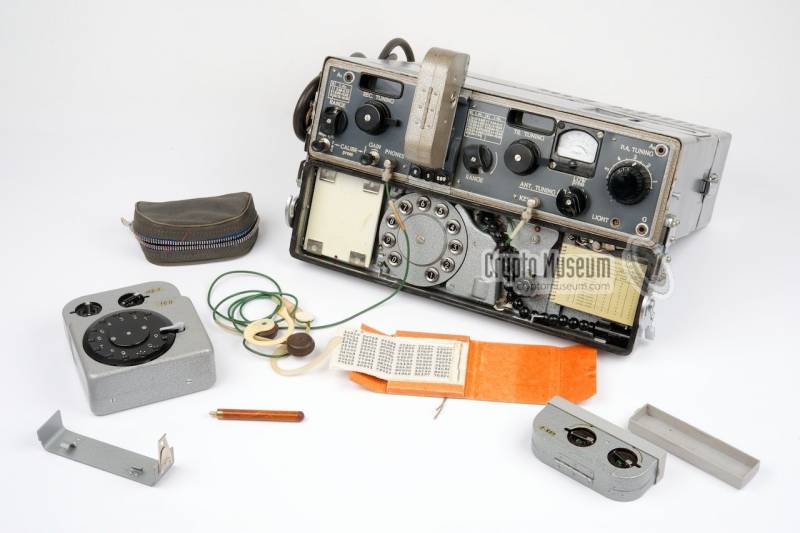 Photo source: military.trcvr.ru
But for their power supply, a battery and a generator or a manual charger, which was used in special forces units (such as PZU-5m), were needed. For ambassadorial conditions, this was very difficult, especially given the fact that, as a rule, there is only one radio operator, and information about what was happening was immediately demanded by the Ministry of Foreign Affairs, the KGB and the GRU General Staff at the same time, which is why the load increased sharply, the radio operator physically did not have time to charge the battery. Due to the fact that at that time the ambassadorial radio operator-cipher officer was an officer of the special radio communications service of the GRU General Staff or the special radio communications service of the KGB of the USSR, each department solved this problem in its own way, at the level of its capabilities. I will focus on the BSP-1 product, the general customer of which was the Ministry of Defense.

Based on the current situation, the leadership of the GRU General Staff set the task for the operational and technical management to conduct R&D on the creation of portable power sources for such situations. Specifically, this issue began to be dealt with by the department under the leadership of Ph.D. Colonel PT Evseenkov. Two low-budget R&D projects began almost simultaneously, in one case they used the principle of converting solar energy into electrical energy, and in the other they used semiconductor thermoelectric converters to obtain the required charging current. The development of a solar battery began to be carried out by the Krasnodar branch of the All-Union Research Institute of Current Sources, which specialized in this topic and for many years produced solar panels for our satellites for various purposes, had its own scientific base and factory production, which made it possible to organize serial production of products. This association was headed by Yu. V. Skokov, a major specialist in this field, who later headed not only the All-Russian Research Institute of Current Sources in Moscow (NPO Kvant), but also became the head of the Ministry of Electrotechnical Industry.

R&D work was completed on time, and after state tests, it was decided to accept this product for supplying reconnaissance units, for which to organize serial production of BSP-1 at the Saturn plant in Krasnodar in 1986.

Even at the stage of factory tests, specialists from the 1th TsNII MO showed interest in BSP-16, who also needed such batteries, but with a large charging current, and for this, the power supply was modernized, which allows connecting batteries in parallel and receiving a total current of about 4 amperes. This made it possible to recharge even car batteries, not to mention the power supply of some signal troops.

The operational use of the BSP-1 was originally intended only as a charger for Soviet missions abroad in critical situations, but due to the war in Afghanistan, the first serial deliveries began to the 40th Army, since the problem of energy supply there was very acutely. The need for a solar battery was not only in the special forces brigade, but also in the 254th radio and radio-technical reconnaissance regiment, where individual posts were thrown out to the mountain tops, and they sorely lacked power sources for round-the-clock radio reconnaissance. It was often necessary to use helicopters to deliver replaceable batteries to them, which not only unmasked the radio reconnaissance officers, but was also costly and unsafe. The regiment, which received BSP-1 batteries, managed to partially solve the problem of supplying power to remote posts, and this was a great help for those who provided them with everything necessary for continuous operation. Already in the GSVG, where the 254th ortp OSNAZ was brought out, I saw in this regiment damaged BSP-1 with through holes from bullets, but working properly, with a slight decrease in the charging current.

If we evaluate the BSP-1 product from the point of view of technical solutions, then we must admit that for those who developed and provided our space with solar panels, solving the problem of creating a small-sized power source seemed, I think, not such an insoluble problem. True, stringent requirements for weight, size, temperature range and specific characteristics led to the fact that the BSP-1 battery turned out to be foldable and, perhaps, not quite small-sized when deployed, but the development team coped with the task completely. 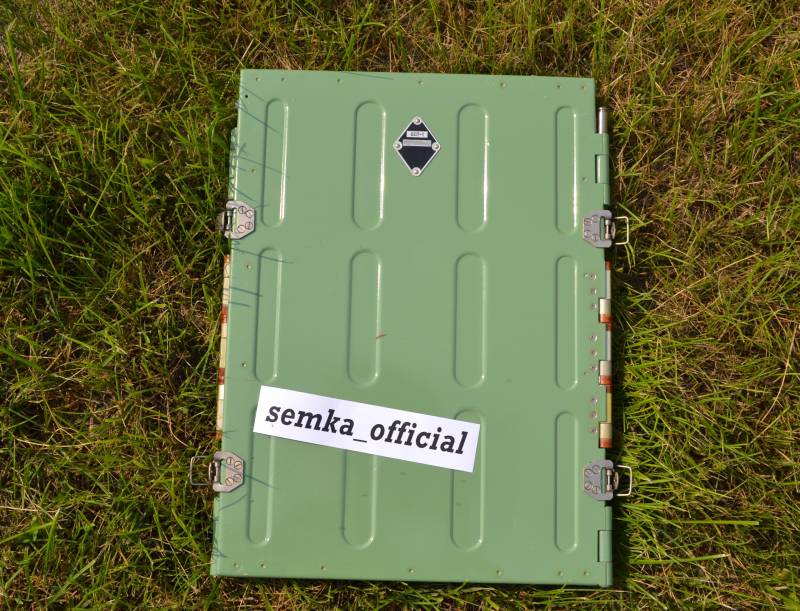 If we compare the BSP-1 product with foreign analogues of that time, then everything that was produced in the USA, Japan, France and Israel for military purposes was inferior in terms of tactical, technical and specific characteristics of our development, and their reliability lagged far behind reliability of our product. This is not surprising, because at that time we were not only the leaders in space research, but everything related to space was the most advanced in our country, which is why the silicon elements in BSP-1 were of the same quality as on ours. satellites. This, of course, affected the price of the entire product, but the general customer considered it acceptable, because in crisis situations, not only the fate of the embassy staff could depend on the BSP-1 battery, but also future relations with those leaders who came to power in this or that country after the coups.

As for the operational use of the BSP-1 product, several structures of the USSR Armed Forces have shown interest in the solar battery. In addition to the signal troops, they were used in the Strategic Missile Forces and in other structures. Ordering structures of the KGB of the USSR also paid for the delivery of BSP-1 products, and those who served in the border troops encountered them at remote points, as some border guards write about on the network. I don't know how things are now in this segment of small-scale power generation of the armed forces, but I think that such equipment should always be kept in stock. The events in Syria and the deaths of some of our servicemen from the MTR shows that the issue of providing autonomous power supply and means of charging batteries for our reconnaissance groups and agents will remain relevant for a long time, which means that this issue must be dealt with seriously.

And in conclusion, I would like to note that when our leaders mention the USSR and "galoshes", which supposedly could only be produced there, it makes me laugh from their "enlightenment", because they have no idea what the country's industry could produce in that time. This is evidenced by the history of the creation of a little-known product BSP-1, which was the best in the world not only at the time of creation, but also for many years after the serial production began.

Ctrl Enter
Noticed oshЫbku Highlight text and press. Ctrl + Enter
We are
Commentary on A. Petrov's interview “Fire and Tactics in the Russian Army: Another Look”What you didn't want to know about England
Military Reviewin Yandex News
Military Reviewin Google News
114 comments
Information
Dear reader, to leave comments on the publication, you must to register.