Where is the image of the future of Russia? 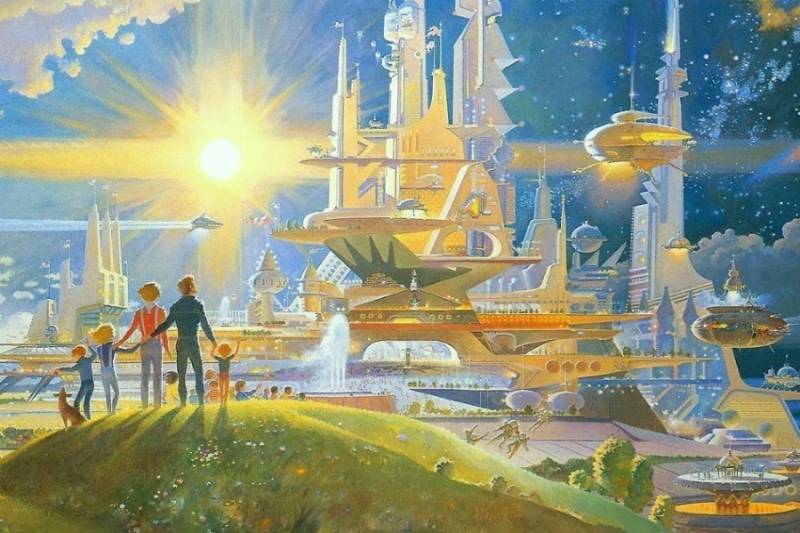 The main problem is that the country does not need money, but an idea. People should understand what they live for, in what state and what goals are in front of it. If there is a meaning in life, everything else will follow.

The image of the future

The main problem of modern Russia is the lack of an image of the future. Those images of the future that were born in the Russia of Yeltsin and Putin are a mockery of common sense and history Russian state and people. Power broadcasts either images of the West (Europe and the USA) or its own internal emptiness. As a result, this results in a complete victory of the consumer society, the society of the “golden calf”, in the monetization of the present. The entire vertical of power only cares about its own inviolability, property, the future of its families and children.

However, a power like Russia cannot live without an image of the future, like some former colony of the West in Africa. The image of the future was in Russia of Ivan the Terrible, in the empire of Peter the Great and Catherine the Great, in the Soviet empire named after Lenin and Stalin. But it does not exist in today's capitalist liberal Russia, where images created in Hollywood and other Western "thought factories" dominate. However, these same images led the whole world to disaster, since you cannot endlessly consume, turning the planet into a dump.

So it turns out that the current crumbling elite of the Russian Federation serves only its mammon, narrow-group and personal goals. These people find accommodation for their children abroad, save up for a "pension": an island, a villa in warm regions. And in these plans there is no future of Russia, there is no future of the Russian people. This is where practically all the fundamental problems of our country and people follow.

The government trusted and still believes in attracting migrants to Russia. And mostly unskilled workers. What for? Millions of labor migrants employed in the private sector, trade and construction are huge amounts of money. Also, our officials do not want to make decisions aimed at increasing the birth rate of the indigenous population (for example, to reduce the number of abortions). They prefer the easier route. By 2030, it is planned to reduce the birth rate and increase the population due to migration. Annual migration growth should be at the level of 360 thousand people.

And there are a lot of such examples. The root problems in almost every area:

1. Basic science has been destroyed. No powerful breakthroughs like in the Russian Empire or the USSR. Emptiness or "show-off".

2. Education is practically destroyed. Western standards and paid services are killing education. The remnants of the Soviet foundation that still held onto it are coming to an end. In schools, in order to pass the USE well, it is imperative to work with tutors, from 10 thousand rubles a month, which is materially unattainable for many ordinary people. Even having received a good education, a graduate engineer comes to strategic production - for a salary of 30 thousand rubles. This leads to a permanent flight of personnel to the service sector and abroad.

3. Destruction of health care. Transfer to toll rails. However, even the rich prefer to receive paid services in Germany or Israel. Bacchanalia with the "virus" only confirmed this fact.

4. The increase in the retirement age, allegedly due to a lack of money, actually became an act of socio-economic genocide of the people.

5. Destruction of the Russian countryside, villages and small towns with the simultaneous creation of huge urban agglomerations like Moscow, St. Petersburg and Kazan, which consume money, resources, people and become sources of ecological disaster.

6. Linking Russia's finances and economy to the West and partly to the East, to the principles introduced in the 1990s (following the defeat in the third world war, "cold") by the IMF and the World Bank. In fact, the principles of the semi-colonial model of peripheral capitalism. Economy "pipe", where there is no place for development, only the siphoning of resources from Russia. In general, this model is already heading towards collapse and will not survive the current global turmoil. The present RF is doomed together with it.

7. Social injustice, when society is split into 1% of the rich and their servants (including intellectual) and hangers-on, and the rest of the people, doomed to poverty, poverty and extinction. When, even in the face of a severe raw material crisis, when the people are getting poorer, the state of the Russian oligarchs is growing. Controlled devaluation of the ruble: the people pay for the mistakes of government, and the big oligarchic capital gets richer.

There are more and more fundamental contradictions. People do not want to give birth because they do not see the future in front of them. In the Russian Empire and the USSR, there was a natural increase in the population: people gave birth, despite all the difficulties, and now they do not. Trouble is on the doorstep. Russia and the people, in order to survive in the fire of world turmoil, must leave the framework of someone else's game. The West has chosen the path of matter, the "golden calf" and is rapidly moving along the path of destroying man (turning him into a virus, consumer-slave-destroyer), humanity and the planet.

Where can we get healthy, correct and beautiful images that will save us? Obviously, you need to turn to the origins, "Russianness". Take the best that was in pagan and Orthodox Russia (holy light Russia), the Russian kingdom, the Romanov empire and the Soviet Union. For example, these are the zemstvos of the Russian kingdom and the Soviets of the USSR. The “power horizontal”, which will complement, heal and strengthen the “vertical”. These are the fundamental foundations of Russian civilization: truth, social justice, conscience and love. The realization that spirit is higher than matter, truth is higher than the law, the general is higher than the particular. This is a stake on a person-creator, a creator, as in the Stalinist USSR, and not on a consumer slave, as in the Western global project. It is necessary to reveal the higher creativity in a person, to develop science and education, healthy art and culture. To create the Russian world of the future, the centers of which will be cosmodromes and science cities, and not shopping centers and brothels. Resurrect the great Russian rivers, Russian centuries-old forests and old Russian fairy-tale cities in the form of national creative projects.

Ctrl Enter
Noticed oshЫbku Highlight text and press. Ctrl + Enter
We are
About Stalin and KhrushchevWhat you didn't want to know about England
182 comments
Information
Dear reader, to leave comments on the publication, you must to register.