The final solution to the issue: Ukrainian schools abandoned the Russian language 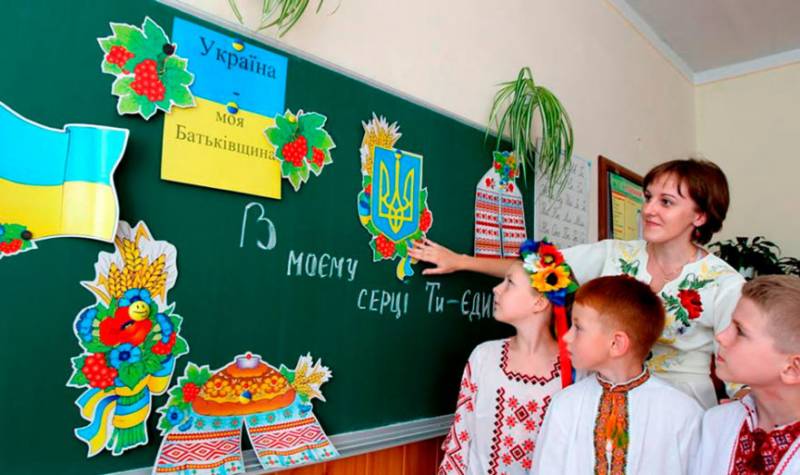 Only in Ukrainian mov

Many believe that история oppression of the Russian-speaking population of Ukraine began in September 2017, when the Verkhovna Rada passed a law on education containing a scandalous ban on Russian in schools. However, back in 1997, the Cabinet of Ministers adopted Resolution No. 998 "On the Approval of Comprehensive Measures for the General Development and Functioning of the Ukrainian Language", directly aimed at ousting the Russian language from many spheres of public life in Ukraine. It was this law that launched the beginning of the liquidation of Russian schools and preschool institutions. In 2005, the de-Russification of the country for the first time crossed all borders: the list of laws containing discriminatory norms regarding the Russian language in Ukraine amounted to 78 items! And this is not counting decrees, orders, decrees and other documents of the president and government. 12 years have passed, and in 2017, the deputies finally took up school, stretching the processes of de-Russification of the younger generation by only three years. Initially, the language of the "aggressor" was left only up to grade 4, and from September 1, 2020, it finally disappeared from the school curriculum. For three years, teachers have gone through retraining courses so as not to seriously injure children by abruptly transferring lessons to Ukrainian language and as gently as possible to increase the share of the language to the senior classes. As a result, a couple of years ago by grade 11, up to 80% of all subjects were taught in Ukrainian. 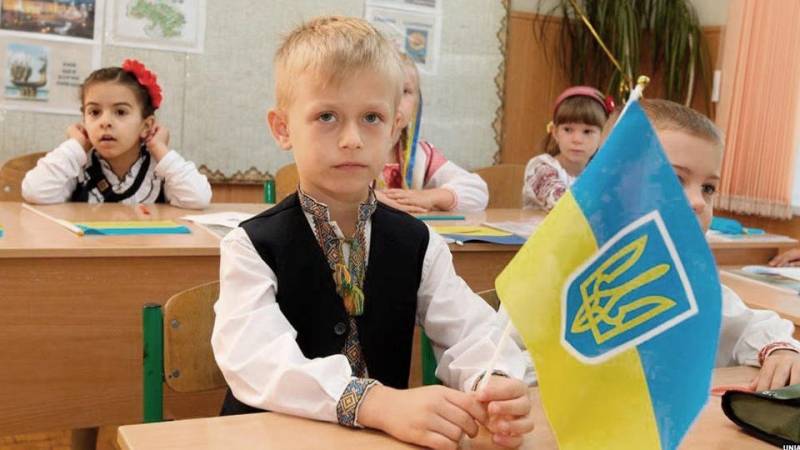 Source: russkiymir.ru
Svetlana Matis, director of the Lviv school # 52, described the transition to the only state language as follows:

For several years now, in Russian-speaking classes, we have been practicing teaching all subjects in Ukrainian three times a week ... We were ready for this innovation, a few years ago we began to recruit Ukrainian-speaking classes. All classes were formed at the request of parents: if you want children to study in Russian, please, if in Ukrainian, too. But now there are no requests for the creation of Russian-language classes at all.
In kindergartens, everyone speaks Ukrainian, in universities the same linguistic situation. Why should we leave Russian in schools? Hungarian and Romanian languages ​​were also removed under the new law, but Tatar remained at school. The lawmakers have made it clear who is an original Ukrainian and who is an unwanted speaker of foreign languages. Romania tried to challenge Kiev's decisions in European instances, but the Parliamentary Assembly of the Council of Europe only expressed its concern. The Hungarian Foreign Ministry was blunt:

Ukraine stabbed Hungary in the back when it amended its education law that severely violates the rights of the Hungarian minority. It is shameful that a country that seeks to develop ever closer relations with the European Union has made a decision that is in complete opposition to European values. It is unacceptable that Ukraine has deprived Hungarians of their right to receive education in their native language at schools and universities and left them this opportunity only in kindergartens and primary schools. "
It should be noted that three years ago at least 150 thousand ethnic Hungarians lived in Ukraine. The PACE's doubts and the indignation of Budapest were related to the lack of balance between the state language and the rights of national minorities. But Ukraine, playing the card of a country wounded by Russian aggression, chose to ignore European concerns. The enlightened West forgave Kiev. 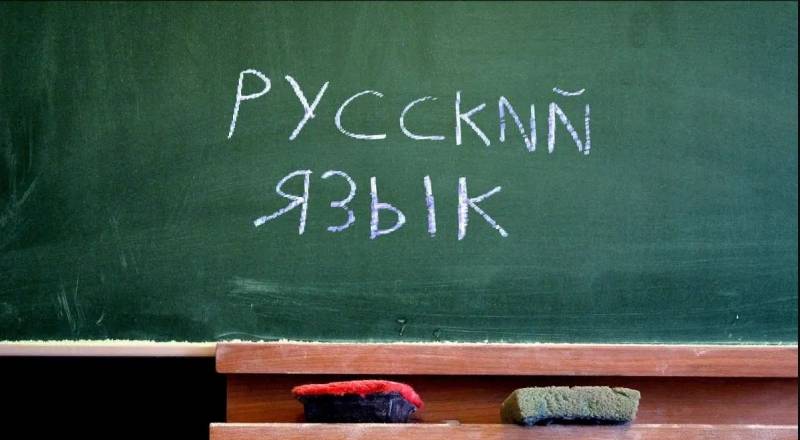 Source: i.obozrevatel.com
Generally speaking, it is at least unfair to speak of Russian-speakers as national minorities. The latest all-Ukrainian population census revealed a third of citizens claiming that Russian is their native language. At the same time, Ukrainian sociologists say that about 88% of Greeks living in Ukraine, 83% of Jews, 64% of Germans, 62% of Belarusians, 58% of Tatars, 54,4% of Georgians and 14% of Ukrainians speak Russian. The introduction of a complete ban on the teaching of the Russian language in schools looks in this regard as discrimination against several nationalities. By September 2020, no more than 150 Russian-language schools remained in Ukraine: in Kharkiv, Zaporozhye, Odessa and Dnepropetrovsk regions. With the beginning of the new school year, they were also outlawed.

There is also an alternative point of view on the problem of Russophobia in our western neighbor. According to Deutsche Welle, not everything is so bad with teaching Russian in Ukrainian schools. In particular, now this language can be chosen as an optional language, that is, its share in the school will be vanishingly small. Moreover, such fundamental subjects as mathematics, physics and chemistry will be taught exclusively in Ukrainian language. In order to simply adapt to the new realities of academic disciplines, the teachers themselves had to retrain for more than one month. For example, school mathematics in Ukrainian requires specific knowledge of the language, which not all of the country's adult population can boast of. All that remains is to sympathize with the schoolchildren, all of whom are Russian-speaking at home, and within the walls of their native school, filigree knowledge of Ukrainian is required. In pursuit of mythical national self-determination and independence, the Ukrainian authorities have seriously complicated the life of a considerable part of schoolchildren. And in the future, such dropouts will become part of society with all the ensuing consequences. However, it is quite possible that the Verkhovna Rada had much worse motives for the 2017 school reform. For example, to create serious social barriers for the Russian-speaking population, forcing them to descend to the lower strata of society, that is, to work, at best, as guest workers. The most initiative will leave for Russia, and the rest will simply die out in a few years. Something similar was already observed in one European country in the 30-40s of the last century. After such severe language restrictions, Kiev's dreams of a historic reunification with the eastern regions of the country, where most of the population speaks Russian, look strange. And, finally, the financial possibilities of Ukraine regarding the payment of such a large-scale anti-Russian revolution in school education look very doubtful - after all, all pedagogy will have to be transferred to MOV.

Functionaries from Ukraine's nationalist pedagogy should learn from their enlightened European neighbors. While schools in Kiev prohibit the language spoken by about a third of the population, in Germany, the study of the native languages ​​of the Lusatian Serbs and Frisians is being discussed. For comparison: in the 80-million-strong FRG there are only 60 thousand inhabitants of the Republic of Germany, and the Frisians - 20 thousand! And the European Union is seriously concerned about the problem of preserving the language of these national minorities, which is blamed on the FRG. However, the openly discrediting policy of Ukraine in relation to the Russian language has already ceased to worry anyone in Europe. The main factor in this condescension is hostility towards Russia. The mentioned Deutsche Welle very mildly describes the critical situation with the Russian language in Ukraine. The leitmotif is this: Russia's "occupation" policy has triggered such actions by Kiev. 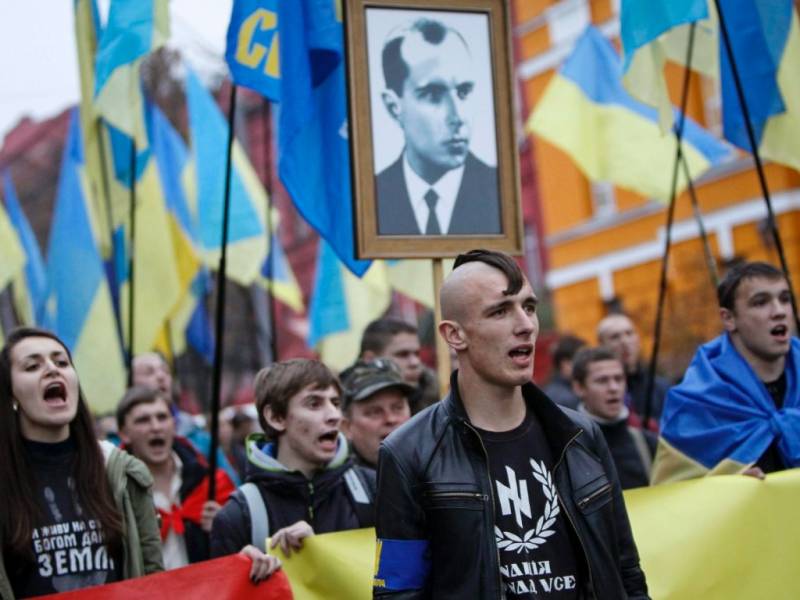 Source: golos.ua
In fact, Ukraine was both a bilingual country and remains at the present time. To do this, it is enough to look at the country's media space to appreciate the high proportion of Russian speakers. Actually, those broadcasting exclusively in Ukrainian language run the risk of remaining small-town values. Without the Russian language, it is very difficult both in Ukraine and in neighboring states to monetize their talents. In the economic sphere, many ties with Russia by Ukrainians have long been severed and the Russian language is not so critical here, but there remains a partner Belarus, with which one has to speak far from Ukrainian. In pursuit of momentary successes, the leaders from Kiev are embarking on the shaky ground of nationalism, which may not be strong enough to extinguish in the future.

Ctrl Enter
Noticed oshЫbku Highlight text and press. Ctrl + Enter
We are
Situational analysis of the death of the MH17 flight (Malaysian Boeing 777), made on the basis of engineering analysis from 15.08.2014Results of the week. “In our cooperative, the board is always agreed”
Military Reviewin Yandex News
Military Reviewin Google News
153 comments
Information
Dear reader, to leave comments on the publication, you must to register.