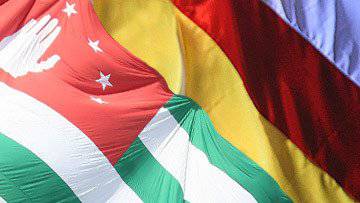 The Minister of Foreign Affairs, Trade and Finance of the island state of Nauru Kiren Keke during his visit to Moscow said that by the end of 2012, two more states of the Asia-Pacific region could recognize the independence of Abkhazia and South Ossetia.


"Nauru was lucky to live in a very peaceful region. Our country has not been involved in any of the major international conflicts since World War II. And I hope that now the people of South Ossetia and Abkhazia will also be able to live without threats and wars. In our opinion, This is realistic to achieve with the help of diplomacy and international efforts. Nauru, in turn, will continue to promote the recognition of South Ossetia and Abkhazia by other countries. For this, other states must first of all carefully examine the whole situation, "said the head of the foreign ministry of Nauru.

"After us, Vanuatu and Tuvalu recognized these countries as independent. In the coming months, I think, the number of such states will increase. At least, according to my data, at least two more countries are very close to recognizing independence in the very near future Abkhazia and South Ossetia ", - added Kiren Keke.

"We studied for a long time history these countries, the legal framework and legal arguments for their future independence. I personally visited Abkhazia and South Ossetia, met with the local government, listened to their position. But during these trips, the most important thing for me was to hear the opinions of people on the streets, to understand exactly what they themselves wanted. As a result, it became absolutely clear to me that the residents of Abkhazia and South Ossetia want to be independent, they believe that they have nothing in common with Georgia, and they do not see any historical and legal basis for remaining a part of this state ", - said the diplomat.

The head of the foreign affairs agency of Nauru also pointed out that there are certain difficulties for cooperation related to the geographic remoteness of the states, but he noted that Russia provides full support in this matter.

The diplomat stressed that relations with Russia are extremely important for Nauru. As, according to him, "there are many international themes that still have an impact on such small countries as Nauru, as well as on other states of the Asia-Pacific region."

"In general, I am very pleased with the development of our relations in the last two or three years. They have reached a very high level, become more open, friendly. And I think this benefits both countries," said Kiren Keke.

He identified three main areas of cooperation between Russia and Nauru:

“Firstly, this is an international level. We are conducting a dialogue on the UN platform on many issues. By the way, not only with the Russian Federation, but also with other countries of the organization, and there are almost 200. We have established cooperation between the permanent missions of the Russian Federation and Nauru at the UN in New York. We discuss everything from climate change to some specific issues related to international and internal conflicts in various countries of the world.

Secondly, we interact in the Asia-Pacific region. Nauru plays a key role in the interaction of Russia with other countries of the Asia-Pacific region. This confirms the fact that Nauru last year in New York co-chaired the Russian Federation at the meeting of the APR states. This fall we will hold another such forum. Earlier this year, Russian Foreign Minister Sergei Lavrov also visited our region, arriving with a large delegation of Russian officials.

Thirdly, we have a bilateral dialogue. Here the key topic of discussion is fishing. This is one of the main sectors of the Nauru economy, and we are very interested in working with Russian fishing organizations to achieve mutual benefits. In addition, there are a number of humanitarian and other areas in which we work together with the government of the Russian Federation, "Keke said.

Is the Republic of Nauru an island state on a coral island of the same name in the western Pacific Ocean with an area of ​​21,3 km? and the population of 11,3 is thousands of people. Nauru’s independence was proclaimed in 1968 year.

The state is part of the Commonwealth of Nations. 14 September 1999 The Republic of Nauru was admitted to the UN. Nauru is also a member of the South Pacific Commission and the Pacific Islands Forum.

In December 2009, the Republic of Nauru became the fourth country in the world to recognize the independence of Abkhazia and South Ossetia, after Russia, Nicaragua and Venezuela.