Touche in honor of the victory of the opposition in Montenegro? Let's not rush! 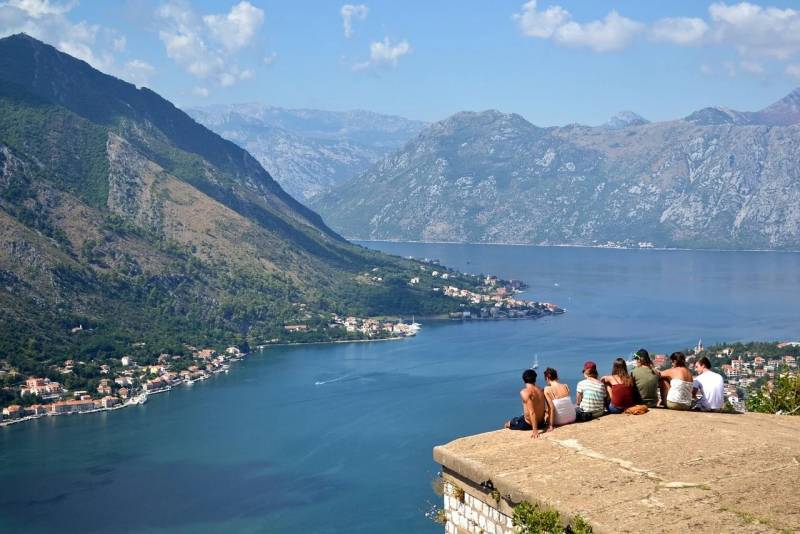 Montenegro. A small country, a point on the map of Europe with a population equal to the population of one administrative district of Moscow. What is 632 thousand people for Russia? The country is located in the west of the Balkan Peninsula and, by our standards, cannot boast of a territory either. A total of 13.812 square kilometers.


Slavic country, a fragment of one of the largest states in Europe, which was destroyed by NATO military aggression in modern times. The smallest of the Slavic countries. A country where what the local Gorbachevs and Yeltsins dreamed of came true. I would even call Montenegro the Soviet Union, which successfully became Europe, according to the plan that Gorbachev and Yeltsin imposed on the USSR.

For those who paid little attention to this state, even the state flag will be interesting. A red banner with a slightly modified double-headed eagle in a gold edging. So much for the symbiosis of symbolism that would suit everyone.

The Balkan USSR in Miniature, or What They Prepared for Russia in the 1990s

Some left-leaning readers developed a sense of rejection. How so? We wanted something else then! We wanted to be great in friendship with a great Europe. We wanted to be a united Europe, so that there would be no wars, competition, deceit and sanctions.

I completely agree. But I propose to remember where the path laid out with good intentions leads ...

To understand my thesis about the USSR in miniature, it is enough to look at the life of one of the oldest prime ministers in Europe (Montenegro is a parliamentary republic), one of the longest-playing leaders of a European country - President Milo Djukanovic.

I understand that there is a question about the position. The prime minister rules, and I'm going to talk about the president. I think you will find the answer to this quite legitimate question below. By the way, comparing some facts, one can answer one more question that is often mentioned in the press. I mean the question about the head of the local mafia - the president of the republic. I will not answer this question unambiguously. I think the readers will find the answer themselves.

So, the President of the Republic of Montenegro Milo Djukanovic. Born in 1962 in the city of Niksic in one of the oldest and most respected families in Montenegro. Let's skip childhood and adolescence. The next stage of life was the university in Podgorica and obtaining a degree in economics in 1986.

Political Views. The future Montenegrin president realized early on that being an accountant was not for him. Therefore, I decided to make a career as a politician. Such a career could not have begun without joining the Communist Party. Djukanovic became a communist at the age of 17, joining the Union of Communists of Montenegro in 1979.

Already in 1986, he became a member of the Central Committee of the Union of Communists (UCC) and successfully worked there until 1989. In 1991, the communists become democrats. The party, accordingly, becomes the Democratic Party of the Socialists of Montenegro. Milo continues his career there. And in 1994 he became deputy chairman of the party. 4 years later, in 1998, he is the chairman of the Democratic Party of Socialists of Montenegro.

Career. In 1991, Milo Djukanovic became the youngest head of government in Europe (29 years old), taking the post of chairman of the government of the Republic of Montenegro as part of the SFRY. The efficiency of his work is evidenced by the fact that he headed the government three times: in 1991-93, 1993-96, 1996-98.

For the fourth time, the future president headed the government in another state - in Serbia and Montenegro. It happened on January 8, 2003. It was the Montenegrin prime minister who initiated the collapse of the union state. In 2006, Djukanovic held a referendum in Montenegro and removed the republic from the confederation. He retained the post of prime minister of the new state from June 2006 to November 2006. However, he also added the post of defense minister.

For the fifth time, the politician became the head of the country on February 29, 2008. To a large extent, the success of the new old prime minister in the leadership of the country was due to his work in the "intermediate" period (2006-2008). Djukanovic understood that it was impossible for a micro-state to remain completely independent and that it was necessary to be washed ashore. In 2009, Montenegro received a "visa-free" with the EU, and in 2010 it received the status of an EU candidate.

On this wave, he again becomes prime minister in 2012. It did not work out with the accession to the EU. At the same time, Montenegro practically lives according to the EU laws, uses the euro, has a "visa-free". But everything worked out with NATO. In 2015, the country receives an invitation to join the alliance, and in 2017 it does.

The first notable differences between Russia and Montenegro emerged in the 2016 parliamentary elections. It seems to me that it is not worth talking about the reasons for these disagreements. Russia actually lost Montenegro after its entry into NATO. And Djukanovic did not want to cancel the entry into the bloc. After many recriminations, Djukanovic was added to the sanctions list in May 2017. He is banned from entering Russia.

One question remains. How and why did Milo Djukanovic become president of Montenegro? The question is really important already because the situation today is developing in about the same way as during the transformation of the prime minister into president.

So October 2016. Parliamentary elections, in which the Socialist Democrats seem to get a majority, but not an absolute majority (41,42%, 36 seats out of 81). If we add up the mandates of the opposition parties (Democratic Front, Klyuch, Social Democratic Party, Democrats), we get 41 mandates. In the best case, 40 against 41. Djukanovic must leave ...

But it was not there. In some incomprehensible (so be it) way, two elected MPs suddenly move into the camp of the ruling party. The score becomes 42: 39 already in favor of the prime minister's party. The HRH receives the right to form a government, but at its congress it decides that it will not be formed by the chairman, but by the deputy, Dusko Markovic.

An interesting configuration turned out. On the one hand, Markovic is the head of government and the de facto leader of the country, and on the other hand, as a member of the DPSH, he is subordinate to Djukanovic. It became even more interesting after Milo Djukanovic easily won the first round of the presidential election against his opposition rival Mladen Bojanic in April 2018.

To be honest, today I find it difficult to define what kind of republic is in Montenegro today. Officially parliamentary, but in fact? Some kind of hybrid. I understand that it sounds silly, but it turns out a presidential-parliamentary ...

Why it's too early to celebrate the victory of the opposition

How we, Russians, love from the fire into the fire! Parliamentary elections have just been held in Montenegro, and our politicians have already congratulated everyone on their victory and predicted the political demise of Djukanovic. In particular, Sergey Tsekov, a member of the Federation Council Committee on International Affairs, is clearly wishful thinking:

It is in the interests of Montenegro to strengthen ties with Russia. She really suffered very big losses from the sanctions policy, which she began to adhere to ... I hope that after the recent elections, the situation will change, that Montenegro will again return to friendly relations with Russia. "
In theory, the opposition won. The Democratic Party of Socialists of Montenegro, Milo Djukanovic, leads the election with a score of 35%, which gives her the right to 30 seats. It is also necessary to add here those deputies who are clearly pro-government. Total - 40 seats in parliament.

It was not for nothing that I focused the attention of readers on the 2016 parliamentary elections. The situation repeats itself. Again, the coalition is against the monolithic majority. Which in itself shows the instability of victory. Where is the guarantee that one of the winners will not defect to the camp of President Djukanovic? The stakes are high enough. Ghostly "treats" when dividing seats in the future government or real ones from the president and the new pro-presidential prime minister.

It is not for nothing that the President of Montenegro is in no hurry to admit the defeat of the ruling Democratic Party of Socialists of Montenegro. Let me cite the words of Milo Djukanovic, which he said during his address on television immediately after the end of the elections:

The election results show that we are gaining 40 seats in parliament. We remain the strongest party in the country. It is too early to talk about the final results, the question is who will receive the decisive 41st mandate. We have built a democratic European society and recognize the winner after summing up the final results. "

Very often, speaking about foreign policy issues, we clearly divide the world into black and white. And the world is different. Remember Vysotsky? "And not a friend, and not an enemy, but so ..." Montenegro is a perfect example of just such a "well". The Communist Party, reborn into socialists. Popular support for politicians who are clearly pulling the country towards some loss of independence ...

It was not in vain that I began the material by comparing Montenegro and the USSR during the times of Mikhail Gorbachev and Boris Yeltsin. I think it became clear to those who read the material, and did not view it diagonally, why I took responsibility for such a comparison.

A small, defenseless and poor country cannot be independent. Therefore, he chooses a patron from the "rich". This is normal. Many small countries feel great under the auspices of great powers and live not only no worse than their owners, and sometimes even better. The example of Serbia and Montenegro as a confederation showed in practice how this choice is made. Serbia is a friend of Russia today, Montenegro is a friend of the EU and the United States.

I am not sure that if the opposition wins, Montenegro will live better. At least in the early years. As well as not sure that while maintaining the previous course, life will become more comfortable. There is no calm in Montenegro yet. The country cannot stabilize in any way and stop internal fermentation. This means that changes can be expected at any time. Which ones? I have no answer to this question ...

Ctrl Enter
Noticed oshЫbku Highlight text and press. Ctrl + Enter
We are
Black future of Montenegro. Why does Podgorica rush to the West?Montenegro took to the streets. The population against the country's entry into NATO
15 comments
Information
Dear reader, to leave comments on the publication, you must to register.