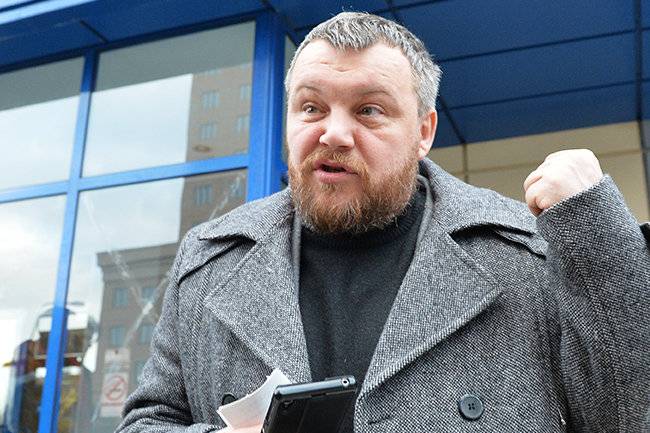 All the same on the arena

Last week, Andrei Purgin, ex-chairman of the DPR People's Council and concurrently editor-in-chief of the Novorossiya news site, published his own interview, in which he announced the creation of the Republican Party in the LPR. Later, in an interview with Donetsk journalist Oleg Izmailov, the politician tried to tell more about the project.

There is really nothing special to tell. The Republican Party will operate not only in the DPR, but also in the LPR, and its backbone will consist of "people who have behind them the past of the fourteenth and sixteenth years."

These are those who have not left the territory of the republic in six years.
The announced political force does not have registration and is not expected, but Andrey Purgin does not see a big problem in this.

Everyone understands that we are on the eve of local elections. Not those, of course, that Ukraine was going to carry out, but republican ones, and somewhat later. Maybe next spring. Everyone who is inside the “Donetsk Republic” or “Free Donbass” is engaged in an active election campaign right now. As far as I know, structures related to Medvedchuk have become more active in our territory. Well, if everyone is preparing for the elections, then we will try to prepare for them,

- the leader of the Republican Party approves.

Purgin has been talking a lot about his intention to participate in the mythical local elections in the LDNR (as well as about Medvedchuk's intrigues that are invisible to the rest of the world). At the same time, he refuses to talk about the main thing: who exactly will be included in the asset, what ideas these people will offer to the electorate, what the party's platform will be and what Purgin and his associates plan to take to improve the socio-economic and political climate in the republic. That is, Andrei Purgin knows that a party is needed, but apparently he does not know what it will do.

Based on Purgin's publications over the past year, the following points of the political credo of the former chairman of the DPR parliament can be listed in the bottom line:

- the current government is criminal (the same was said about Zakharchenko);
- it is necessary to develop industry (so far Purgin's only proposal in this field is to use mine water for irrigation; a controversial and expensive project);
- it is necessary to study the experience of the Donetsk-Krivoy Rog Soviet Republic.

It is sparse, to be honest, but since the Republican Party of Purgin has no competitors, you can not make your life especially difficult by developing tactics and strategies for getting the region out of the crisis. A few abstract slogans are enough, and into battle: all the opponents of the current government, willy-nilly, will slide under the banner of the only opposition party of the LPNR.

The calculation is correct: all the other oppositionists not only, like Purgin, sin by lack of a minimum package of ideas and programmatic theses, but also know nothing about the DPR, worse, they are outside the republic. Except, perhaps, Skif - Alexander Khodakovsky, whose willingness to fight for power is indisputable, but he is not very welcome in Moscow. So Andrey Purgin has enough chances to become the leader of all opponents of the current government.

Moreover, the local authorities, to all appearances, are not only not against, but are ready in every way to contribute to the formation of a local leader of the protests and the creation of their own Navalny. Let us remind you that Purgin was removed from the deep underground, and soon he was employed as the editor-in-chief of the Novorossiya website precisely after Denis Pushilin's accession to the throne. Under Zakharchenko, it was not comme il faut to communicate with the ex-chairman of parliament even for the Russian media. But after Pushilin became and. So, and then the head of the republic, Purgin's activity is limited only by his own abilities, and the “bloody regime” does not at all try to besiege the oppositionist or at least remind him that a political party cannot operate without registration with the Ministry of Justice. Probably, in the future, this favor will not disappear anywhere, and the Republican Party will still take place.

Well, the technology is as old as the world and more than relevant for Donetsk. The current head of the DPR, who does not have the grip of Zakharchenko (who easily threw opponents out of the republic or sent them to the basement) and the skills of Pasechnik (ex-colonel of the SBU), has much less opportunity to fight the opposition. Therefore, it would be quite logical and convenient to lead this opposition. Of course, through a comfortable figure, which is Andrei Purgin.

The only intrigue in this game: does the former chairman of the People's Council of the DPR Purgin himself understand what role he has been assigned to in this play?

Ctrl Enter
Noticed oshЫbku Highlight text and press. Ctrl + Enter
We are
The coup in the DNI: who should congratulate? Part of 1Situational analysis of the death of the MH17 flight (Malaysian Boeing 777), made on the basis of engineering analysis from 15.08.2014
Military Reviewin Yandex News
Military Reviewin Google News
18 comments
Information
Dear reader, to leave comments on the publication, you must to register.