Until the thunder strikes, the man will not cross himself 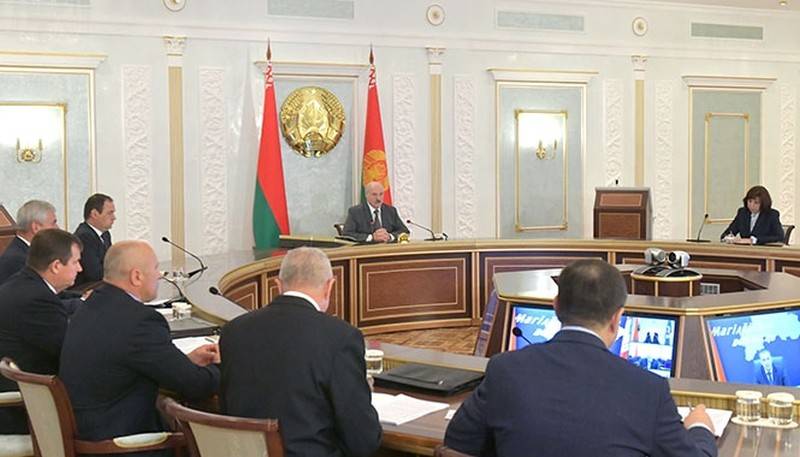 Judging by the events unfolding in the Republic of Belarus, the Western partners, not in words, but in deeds, are implementing the Anaconda plan - the American concept of encircling Russia with a ring of unfriendly “democratic” countries. A new tactic has been developed for carrying out acts of disobedience to the authorities, using any socially significant pretext, be it an election, a natural disaster, or some other mass manifestation of discontent with the masses. Common sense and a simple sense of self-preservation should have prompted the leadership of the countries of the former Soviet Union that it is time to draw conclusions from the host of colored revolutions that swept through their once allied "sisters."


But arrogance or something else did not allow the leadership of Belarus to do this in a timely manner. The orange whirlwind in fraternal Ukraine, orchestrated and conducted by pro-Western "democratically" minded Svidomo figures, taught nothing to "butt". The same line of flirting with the West, an attempt to hang all dead dogs on Russia, the search for exclusively only one's own benefit to the detriment of union obligations were a distinctive feature of the policy pursued by Alexander Grigorievich lately. What did this lead to? Mass protests and rallies of dissatisfied people demanding Lukashenka's departure, a recount of votes, and the transfer of power to the opposition. A crisis broke out.

The opposition, and then A. Lukashenko, brought their supporters out to the square. If the supporters of the President of the Republic of Belarus are 30-40-year-old fathers and mothers of families, then the supporters of S. Tikhanovskaya are entirely young people under 30. And these young people did not study in the homeland of Oles Gonchar, more and more in the non-farmland and the landowner, and some went through the "course of a young soldier" in the Square. Why did these young people not study with us in Russia? Because the now commercialized Russian universities do not allocate quotas for free education of envoys from the union state. The same cannot be said about the panstvo, where the most zealous and advanced anti-Russian "students" are even issued a residence permit for free. If only he carried the ideas of democracy in Polish, of course, to the broad masses of Belarus.

The fact that the leadership of the Republic of Belarus made an excessive tilt towards our geopolitical opponents is clearly seen from the simple fact that the former head of the presidential administration of the Republic of Belarus, and now the irreplaceable foreign minister, Mr. V. Makei, passionately lay under the -on M. Pompeo. And at the same time he wanted to spit on Russia and the union obligations of his country.

Well, and, of course, concocted by the SBU Square история with the detention of "33 heroes" of the PMC. By the way, no one from the Belarusian leadership apologized to us for illegal actions against the citizens of the union state.

We naively believe that "but father" is firmly committed to the idea of ​​creating a union state. In words - yes, but not in deeds, since there is no progress on the integration ladder. There are only economic demands, requests and wishes to receive oil products and other raw materials from Russia at domestic Russian prices. At the same time, political issues are bracketed.

Why is this happening? In my opinion, there is an attempt by Alexander Grigorievich to preserve the foundations of the late USSR in his homeland, which ceased to meet the aspirations of a part of the country's citizens. This is what leads to a conflict of interests in economics, politics, interstate relations.

Alexander Grigorievich does not like modern Russia with its oligarchy. Maybe this, but who's stopping to do it like in communist China? Give freedom to the private initiative of citizens while preserving the commanding heights in the hands of the state, implement the Leninist policy of NEP "in a single country", enrich Marxism-Leninism with a new word in the development of the theory of class struggle, so that Comrade. Zyuganov became jealous. Nor does it. What then should the authorities rely on? Where is the social basis on which it can continue to exist? Working class? So he also went out to the square and demands changes ... For joint ventures with the Russian Federation, there are none, just as there are no joint projects in the defense industry, science and technology. And all because of the fear of “absorption of Belarusian producers by Russian oligarchs”. But in this way it is possible to reach the point that a takeover will take place, but not by Russians, but by Western ... TNCs. Then bankruptcy, and the same sad fate of industrial giants, like Svidomo. Only one bulb will remain ...

But the West would not be itself if it did not try to invent something new nasty for the needs of the day in order to destroy its opponents.

On the example of Belarus, we see a change in the tactics of the collapse of the state. Now even the voting result is not important. If you are unwanted, then even with 80% of the votes in your support, the elections will be declared illegitimate, fabricated, and you will be declared a usurper and dictator. This happened in Latin America, why not try it in Europe as well?

And in the future, the "carriers of democracy" are going to set fire to the periphery of the state they do not like. For this, a new doctrine called "Trojan Horse" has been developed, in which one of the leading roles is assigned to the so-called fifth column. In the Republic of Belarus, they believed that she was not, but it turned out that she was. And we have it too. The neoglobalists' plan is as simple as a three-line scheme: it is necessary to start rocking the unwanted regime from the provinces, because, according to the idea of ​​the propagators of democracy, during the unrest on the outskirts, the center simply does not have enough resources to extinguish the discontent of the protesters and keep the capital from protests of "democratic forces." And these are not simple words, if we recall that back in 2018, the US Congress approved spending on the promotion of democracy in our country in the amount of $ 18 billion at the rate of $ 2 billion for capitals and $ 1 billion for million-plus cities. And all these funds through numerous channels will be poured into the accounts of non-profit organizations of pro-Western bottling. We must assume that Mr. Khodorkovsky, released from prison on his word of honor, will no longer take part in the political struggle against the state.

And similar actions are already being tested in the Khabarovsk Territory, where supporters of the former governor, Mr. Furgal, are being taken out onto the street. Earlier, we saw an organized protest against the alleged illegal annexation of Crimea to Russia by the Mejlis of the Crimean Tatars.

Is there an objective basis for such performances? Probably there is, because there have always been dissatisfied people, there are and most likely will be. And the provinces have accumulated much more problems than residents of metropolitan cities. And this was clearly shown by the recent trip of the Prime Minister of the Russian Federation M. Mishustin to the Far East. Why is this state of affairs? Because the revolutions are not taking place in Uryupinsk, but in the capitals. And to prevent them from happening, the metropolitan public is better fed, watched over it more vigilantly and guarded by riot police better than the provincials. How else!

Well, Belarus and Belarus, but what does it matter to us? Here's what. Having torn Belarus away from Russia, destroying the union state, the Yankees will objectively weaken Russia as one of the leading geopolitical opponents of the United States. This applies to the geostrategic position of the country and its military infrastructure, and the aim of quietly "squeezing" the Kaliningrad region, and complete encirclement with the closure of the "anaconda ring" around the Russian Federation. But not only that.

Belarus with its current problems can be seen as a prelude to the presidential elections in Russia in 2024. And the bells, as they say, have already been.

The first step in this direction was an attempt to fail the adoption of amendments to the Constitution of the Russian Federation. How much bile was poured out on the president of the country, how many accusations were made against him of an irrepressible thirst for power and a desire to keep his office by any means! Did not work out. The people voted for the amendments that kick out "double-passport" people from the power structures, for an increase in the residency requirement for a candidate for the presidency.

The second attempt was during the organization of protests in Khabarovsk during the arrest of the governor of the region S. Furgal.

What will our counterparts use for the 2024 elections? To begin with, they will hang the slogan: "For honest, fair elections", a priori suspecting the authorities of dishonest and non-transparent elections, although all ballot boxes are transparent and ballots are lowered under the watchful eye of observers and video cameras.

If the current President of the Russian Federation V.V. Putin, then when he wins again, the eggheads from the headquarters of the foreign get-together will lead their supporters out into the streets and squares under the opposition's battle cry: "Putin, go away!" At the same time, as in Belarus, this audience will not care about the result of the vote. The main thing: "Putin, go away!" (Otherwise, because of you, we cannot tear Russia apart! And so I want to bite off a bit sweeter and more!)

If the GDP does not go to the elections, then a problem with a successor may arise. Prepare for the remaining four years "young and early" is unlikely to succeed. Therefore, most likely, it will be a Russian-scale manager who has proven himself in practical work, such as, for example, M. Mishustin or S. Shoigu, or S. Lavrov. They are popular, experienced, mature and still full of strength. But all this is a matter of the near future. As they say, wait and see.

The main thing for us today is to draw conclusions from the situation in Belarus and to prevent such a scenario for the development of events at home.

Ctrl Enter
Noticed oshЫbku Highlight text and press. Ctrl + Enter
We are
A great interview with Sergey Lavrov: about Ukraine, Obama and IranWhat you didn't want to know about England
Military Reviewin Yandex News
Military Reviewin Google News
150 comments
Information
Dear reader, to leave comments on the publication, you must to register.