PMC named after Trump. Americans demand payment for the deployment of their troops 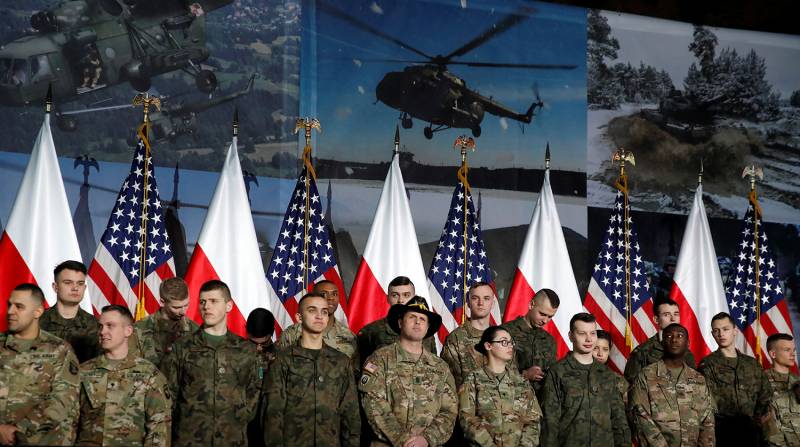 Mercenaries made in USA

Any interstate alliances are based either on a certain business strategy or on the basis of ideology. In the first case, typical examples are the OPEC cartel, created solely for the purpose of maintaining adequate oil prices for the participating countries, and the European Union, which unites primarily the economic interests of states. The North Atlantic Alliance, known as NATO, was created purely with the aim of confronting the countries of the socialist military bloc, primarily the USSR. It involved politics, and therefore ideology.

At first, in the camp of our potential opponents, everything was distributed on the shelves. Despite the fact that NATO countries had to pay at least 2% of their GDP to the general treasury, the United States bore the bulk of the costs. However, last year the Americans gave the union about 3,2% of their gross domestic product. There is nothing surprising here: the role of the leader of a military-political alliance implies high spending. For the time being, the US leadership was satisfied with this state of affairs. With the coming to power of Donald Trump, the situation has changed.

Like a real businessman, the President of the United States approached stories NATO with a calculator and identified a large dividend shortfall. Take Germany, for example. The Germans do not pay enough to the general treasury. And okay, they would be manageable. But they do not want to adapt to the interests of their older brother and are becoming increasingly energy dependent on Russia. A certain punishment for the Germans was the withdrawal from Germany of more than 12 thousand soldiers of the American army. If you don’t want to pay, stay alone with your Bundeswehr. On the one hand, Germany lost a part of the military contingent, which certainly added political weight to the state, and on the other hand, the Germans had an incentive to invest resources in their own army. Berlin will now have the moral right to continue its line of minimum contribution to the economy of the North Atlantic Alliance.

Berlin is not alone in this opposition to US business strategy. Seoul and Tokyo have also sharply cut their defense spending. South Korea, where nearly 30 Pentagon military personnel are based, has cut funding for this onerous asset several times. And Japan refused to purchase an expensive American missile defense system. It is worth recalling that South Korea is rather a partner of Washington, while Japan, which decided on such impudence, has actually been occupied by the US army since 1945. 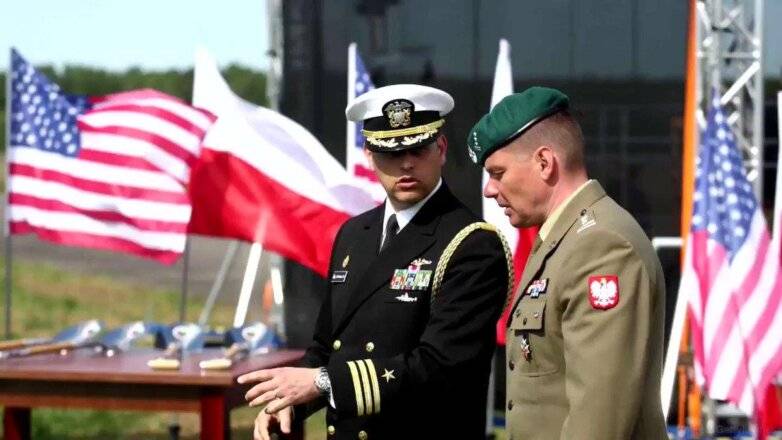 Source: profil.ru
So far, outright blackmail, which Donald Trump decided in Germany, has been continued in the history of Poland. Washington agreed with Warsaw on the deployment of a contingent of troops, the total number of which can reach 20 thousand soldiers in times of crisis. In this regard, the interview of the Polish general Waldemar Sksypchak, which he gave to the Do Rzeczy portal in the middle of the summer, was indicative. Answering questions, he, in particular, very characteristically described the American president:

“Trump is a weak politician, but he is also a great businessman. In the context of the meeting with our president and steps in terms of defense capability, he acts as a businessman. Moreover, in general he gets along well with Putin, while we do not have good relations with Russia. But by being with Trump, we are, in essence, supporting American industry. We have never spent as much money on American industry as we do now. ”
Despite the opinion of General Skrypczak, Poland has opened its borders to US troops and is ready to pay for the presence of the military on its territory. In fact, Trump has turned his forces in Europe into a well-armed and trained army of mercenaries. The ideological bonds of the NATO bloc have crumbled: now the one who pays the most decides everything.

For Trump, the successes in the paid deployment of troops in Poland are more tactical in nature. The profitability of such an asset would be questionable and would only cover the operating costs of infrastructure, the operation of weapons and the deployment of personnel. The US President will obviously flaunt this achievement during the election campaign in the fall: after all, he made the Poles pay for security. But the reputation or strategic losses for the US Army and leadership are much more important. Geopolitical partnerships are built on the basis of mutually beneficial cooperation, but not on the basis of direct payments for the presence of the military. The world will get the impression that the protection and patronage of the United States can simply be bought, as if at an auction. Military under the Stars and Stripes are turning into a private military company named after Donald Trump. In this regard, the ever strengthening duet of Russia and China will become a worthy alternative partner for many third world countries. The most interesting thing is that the actual purchase of mercenaries from the United States does not guarantee the leadership of the host country protection from the "beacon of world democracy." In the event of attacks unacceptable for Washington from Poland itself, the leadership will be unambiguously shown their place in the world table of ranks. And the units of the US armed forces on the territory of the guilty one will at one point become an occupying contingent. 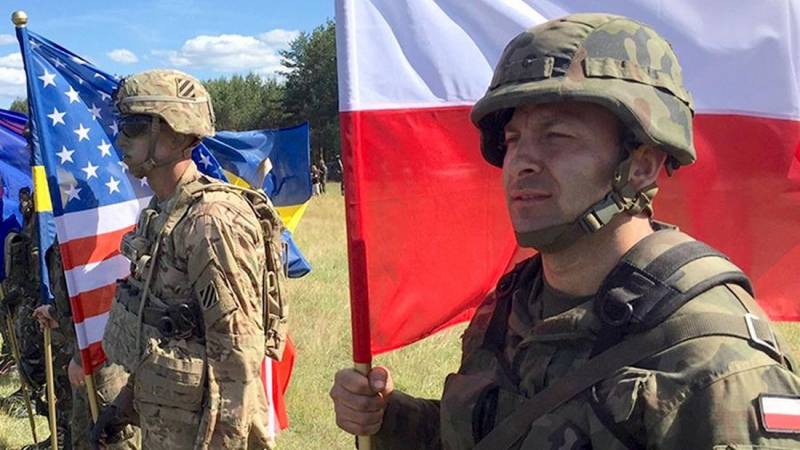 Source: 112.ua
Poland not only agrees to pay the United States for the deployment of mercenaries, but has pledged to bring its contribution to the general NATO treasury to the minimum possible 2024% of GDP by 2. It seems that in the North Atlantic alliance, the situation with the accounting department is not the best: at least two countries are chronically underpaid to the common financial cauldron. As a result of the deal, which was endorsed in mid-August by Andrzej Duda and Donald Trump, since October 2020, the Poles will receive the advanced command of the V corps of the US Ground Forces, a joint combat training center in the Drava-Pomeranian Voivodeship, an MQ-9 drone squadron, an armored brigade in Zagan -Swentoszów and a few other less significant divisions. In addition, the Poles intend to provide large areas for joint military exercises.

The presence of the armed forces of a foreign state, even a friendly one, is always like doping. On the one hand, those around them value the increased strength and abilities, and on the other, military-political impotence develops. Poland does not win much more than the United States in this situation, and most of the dividends are tactical. For a while, a new leader will emerge in Eastern Europe, whose ambitions are backed up by the military might of the Pentagon. Nobody believes in the tales of leveling the mythical Russian threat with American armor and guns. Moscow is the first to attack Poland only in the most apocalyptic scenarios. As, however, and Poland against Russia. Warsaw can always view the presence of troops from across the ocean (after all, the most powerful army in the world) as an obvious trump card in the fight for votes. The American soldier ensures the safety of the common Polish man, albeit at a high price. But what if we seriously consider the withdrawal of US troops from Poland? What then will remain in the hands of the leader of Eastern Europe? Own army, which received less funding and Russian troops on the border, annoyed by the entrepreneurial spirit of Warsaw. Moscow has already unequivocally spoke negatively about the multiple increase in the US military contingent in Poland, the official reason for which is to "contain Russia." To avoid such a scenario, the Poles will, to the best of their ability, continue their Russophobic line of behavior and pay bills from Washington on time. The American establishment, keen on reducing the costs of maintaining foreign bases, will continue to destabilize the situation in the world. In Europe - due to the obvious strengthening of Poland, a long-time political opponent of Germany, and in other, less developed countries - the unwinding of anti-Russian and anti-Chinese hysteria. It is possible that Trump will once again exacerbate relations with North Korea: for Tokyo and Seoul, weighty arguments are needed for their financial intractability. In the fight for dividends, all methods are good!

Ctrl Enter
Noticed oshЫbku Highlight text and press. Ctrl + Enter
We are
Russia "swallowed" OPEC. But is the “oil deal” beneficial to our country?OPEC Summit: pricing jokes
21 comment
Information
Dear reader, to leave comments on the publication, you must to register.