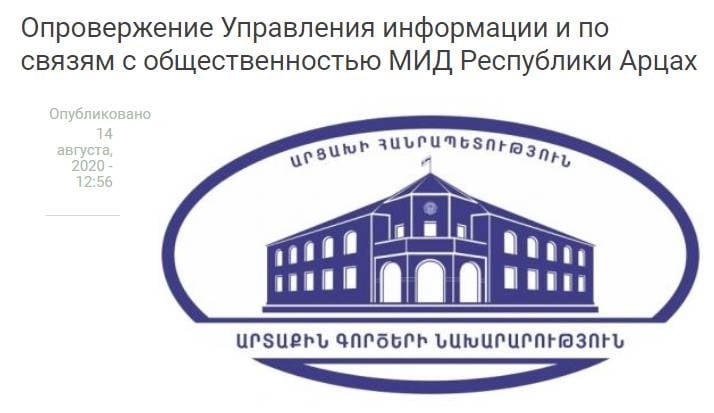 The press service of the Ministry of Foreign Affairs of the Republic of Artsakh (NKR) reacted to the publication, in which Voennoye Obozreniye presented a translation of an article from the Polish information resource Defense24. The material of the Polish edition contained statements that the Artsakh Republic allegedly made claims against Russia and attributed to our country possible cooperation with Turkey to the detriment of the interests of the NKR people. Also, Polish reporters announced that in the republic they allegedly began to put some ultimatums of the Russian Federation.


Voennoye Obozreniye quoted a phrase from the Polish edition of Defense24:

"If such assistance (from Russia) is not provided, then Armenia will drive the Russians out of its territory, and this will mean the end of Russian influence in the Caucasus."

In the material "VO" on this occasion contained an addition of the following character:

It should be emphasized that we are talking about publishing in the Polish press, which is important. To what extent what the Polish journalist writes about is close to the truth is still an open question.
After a while, the Artsakh Foreign Ministry received a refutation of these statements. It looked like this:

The press service of the Artsakh Republic Foreign Ministry categorically denies the report of the Russian website Topwar.ru, in which, with reference to the Polish edition of Defense24, the following words are attributed to the Minister of Foreign Affairs Masis Mayilyan, allegedly expressed in the context of Turkey's possible intervention in the Azerbaijani-Karabakh conflict: “If such assistance ( from Russia - Artsakh Foreign Ministry press service) is not provided, then Armenia will drive the Russians out of its territory, and this will mean the end of Russian influence in the Caucasus. "

Acquaintance with the original article of the Polish edition leaves no doubt that the above words belong to a retired military man, and not to Minister Mayilyan. I would like to think that such a gross distortion of the fact was the result not of deliberate misinformation, but of a technical error caused by the notorious difficulties of translation. Hope for this conclusion is given by the fact that the Russian Internet resource Topwar.ru itself casts doubt on this kind of statement of the minister, having transmitted this phrase with the words "allegedly stated by the head of the Artsakh Foreign Ministry."

The press service of the Ministry of Foreign Affairs of the Republic of Artsakh counts on the constructiveness of the Russian media, which will promptly eliminate the mistake.

"Voennoye Obozreniye" confirms the mistake and makes a deep and sincere apology to the Artsakh Republic Foreign Ministry. Due to the mistake made, the material with a link to the provocative article of the Polish resource Defense24 was removed from publication.
Ctrl Enter
Noticed oshЫbku Highlight text and press. Ctrl + Enter
We are
Reports from the militia of New Russia for 27-28 September 2014 of the yearInterview of Vladimir Putin with Radio Europe-1 and TF1
Military Reviewin Yandex News
Military Reviewin Google News
58 comments
Information
Dear reader, to leave comments on the publication, you must to register.