Chesma. 250 years later: the return of the admiral 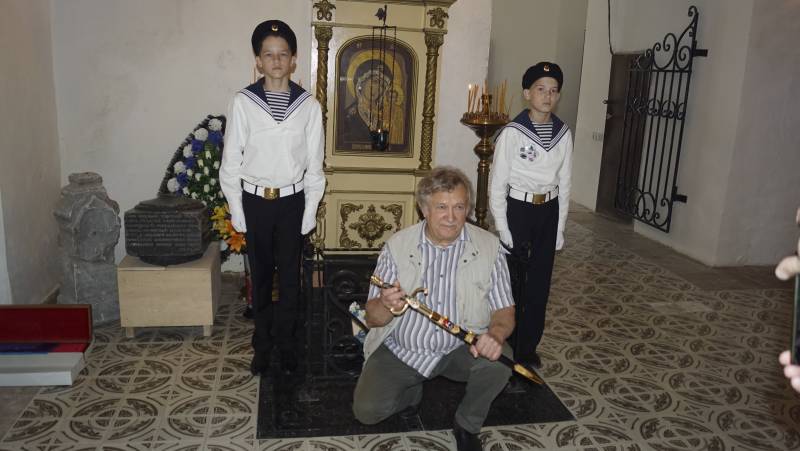 250th anniversary of the glorious victory of the Russian fleet in the Battle of Chesme was celebrated shortly after the jubilee Parade of the 75th anniversary of Victory in the Great Patriotic War. The scale of the festive events was incomparable, and this is understandable. Nevertheless, the Chesme memorable date has not been forgotten either!

A truly worthy occasion was found not only to remember Chesma, to celebrate the anniversary, but also to honor the memory of Russian admiral Grigory Spiridov. It was he who made possible almost the first such brilliant victory of our fleet over the Turks, who at that time still considered themselves the masters of the three seas: the Black, Marmara and Aegean.

And it happened all the same day after day. Namely, on the Day of the Russian Navy, when the naval parade began in St. Petersburg, and battleships of the Baltic Fleet passed along the Neva. On this day, July 26, in the temple of the Transfiguration of the village of Nagorye, Pereslavsky district of the Yaroslavl region, in a solemn atmosphere, the admiral's dagger was handed over to the great Russian naval commander Grigory Spiridov. 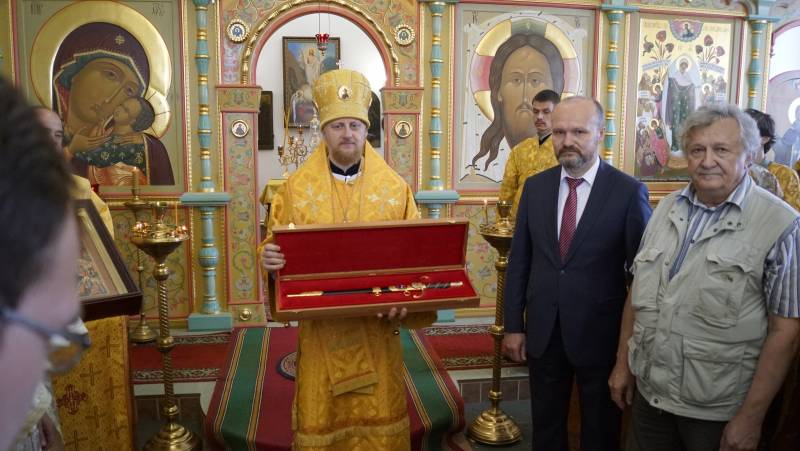 Dirk transfer
Everyone who watched the parade for the Day of the Russian Navy on television has heard that from now on, Admiral Spiridov will be the first to be named among the greatest naval commanders of Russia. And I want to think that now it is already forever. After all, it was he, and only he brilliantly developed an ingenious plan for the complete defeat of the Turkish fleet in the Chesme Bay in 1770.

Admiral Spiridov, a flesh-and-blood sailor, the son of the commandant of Vyborg, a midshipman from the age of 15, commanded one of the Russian squadrons in the fleet in the Aegean Sea. At the head of the fleet of nine battleships and two frigates was one of the favorites of Empress Catherine II, Count Alexei Orlov. 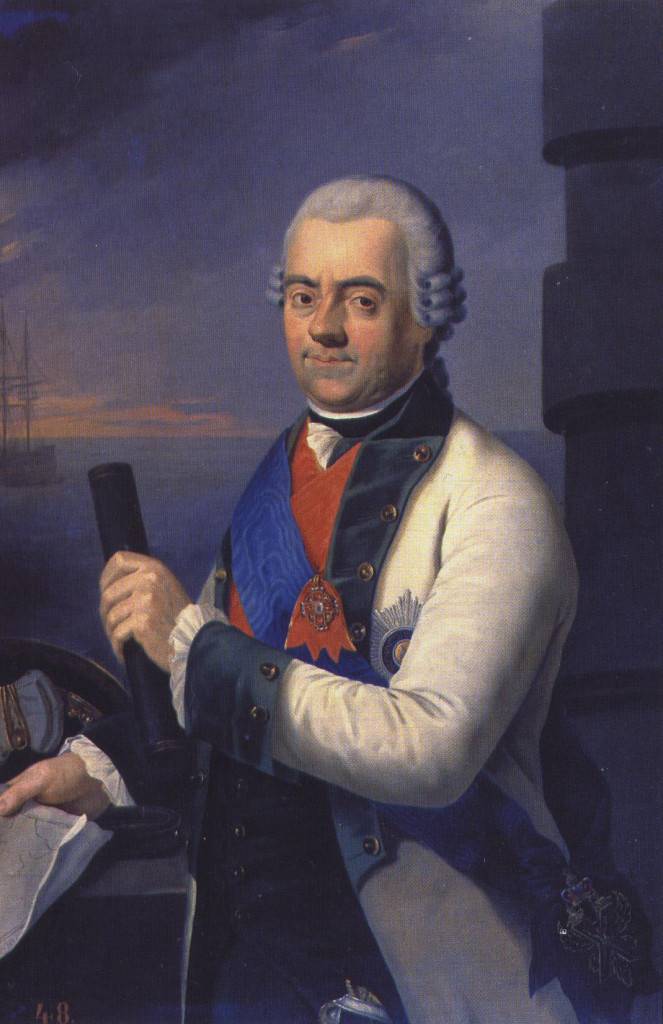 But it was Spiridov, together with the captain of the first rank, Greig, who insisted on a decisive attack on the Turkish fleet, which was almost twice the Russian forces. The Turks, commanded by Kapudan Pasha Hasan Bey, had 16 ships of the line, supported by six frigates and coastal batteries.

The first battle with the Turks in the Gulf of Chios on July 5 was not very successful, the battleship Saint Eustathius was lost, which exploded almost together with the Turkish flagship Burj-u-Zafer. But the main thing is that the enemy fleet preferred to take refuge in the Chesme Bay.

And then, long before the famous Nelson, Admiral Spiridov proposed abandoning linear tactics and cutting through the formation of Turkish ships. They had already lined up in the Chesme Bay in an arc in two lines, which made it difficult for half of the fleet to fire. 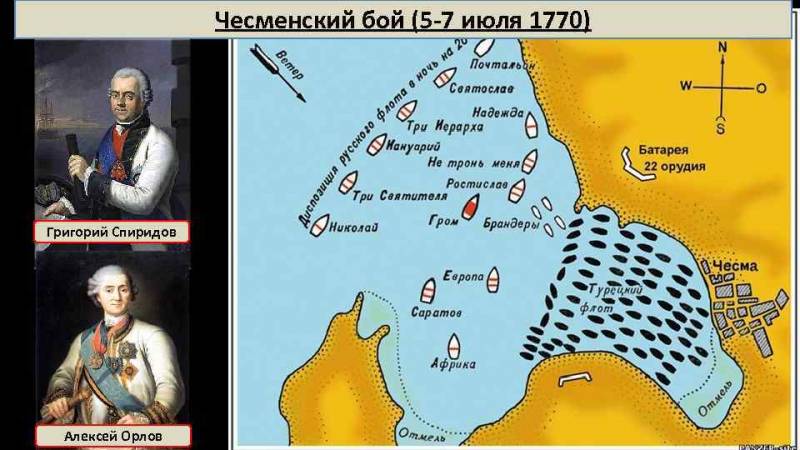 Spiridov noticed another mistake of the enemy: the construction of the ships was so close that they could catch fire from each other. Therefore, he proposed to bet on the fire-ships, into which several auxiliary ships were converted overnight.

The Turkish naval commanders, whom the Russians have not yet taught to be beaten, have already appreciated their superiority: more than 1300 guns against 630 from the Russians. They did not believe that the enemy would dare to attack them. The first shots at the Turks were made by Russian battleships in the late afternoon of July 6, after which the exit from the small Chesme Bay was practically closed for the Turks. 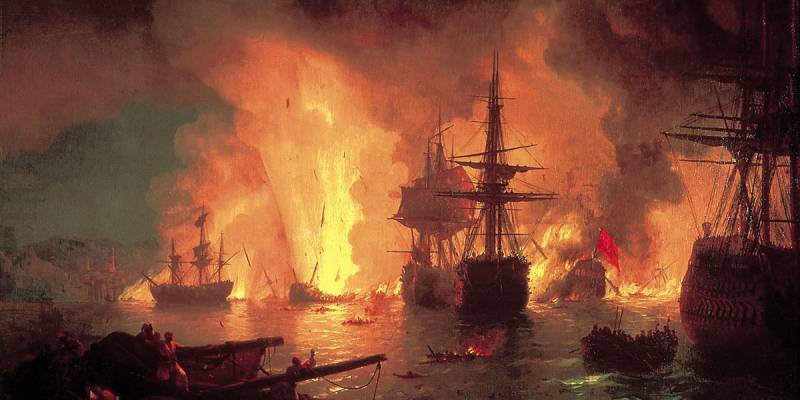 Battle of Chesme
After the Russian gunners set fire to the first Turkish battleships and frigates, the firebreakers took over. Despite the fact that the enemy managed to shoot two of them, the heroic Russian sailors, supported by well-aimed fire from ships, were able to consistently set fire to almost all Turkish ships.

Although only one of the Turkish battleships, Rhodes, was captured, the defeat was complete. It is very characteristic that on the orders of Admiral Spiridov personally, sailors from Russian ships saved the Turks from burning and sinking ships all night.

The glorious Chesme victory in Russia was remembered for a very long time. Count Orlov soon received the title of Chesmensky, and Spiridov retired just three years later. It is believed that he departed for his homeland - in the village of Nagorye, Yaroslavl province, out of resentment, although he received the Order of St. Andrew the First-Called.

A Chesme obelisk was soon opened in Gatchina, a memorial column in Tsarskoye Selo, and a memorial Chesme art gallery in Peterhof. The road to the St. Petersburg suburbs is still adorned with the Chesme Palace and the completely unique architecture of the Chesme Church by Yuri Felten. 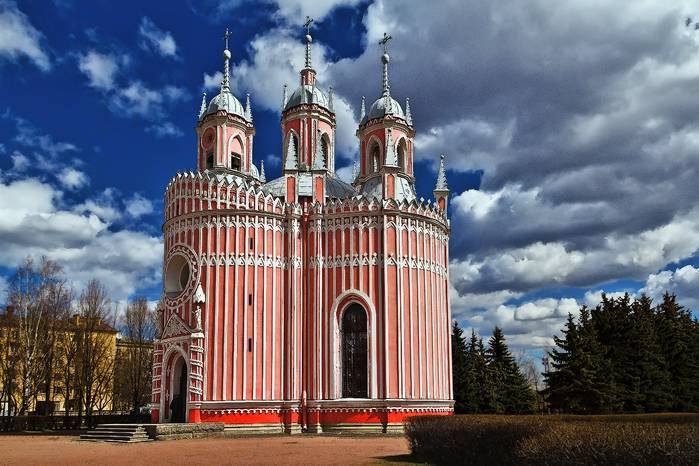 And what about Russia today? She, having allowed to quietly celebrate the anniversary at the place, it seems, simply does not want to continue to notice the deafening triumphant thunder of Chesma. However, this is precisely the official Russia, more precisely, those who for some reason decided that it was they who were the official, and in fact - the semi-official Russia.

We do not know which Kremlin offices did not dare to say a word about the 250th anniversary of the Chesme victory. But now almost everyone prefers to be silent and pretend that they know nothing about the transfer of the admiral's dagger to the place where the grandfather of the Russian fleet, the Boat of Peter the Great, continues to carry out his service very nearby.

Only a small group of associates and the descendants of Admiral Spiridov look up to the Andreevsky flag and freeze every time they hear the name of Grigory Andreevich. It would seem, what else can they do? Much! Even a lot!

The stone of returning the memory of the legendary naval commander has been thrown and the circles are already diverging, penetrating the hardest minds. Yesterday only talked about the lost blade of the naval commander, and today he has already arrived at the Temple of Transfiguration in the Highlands. 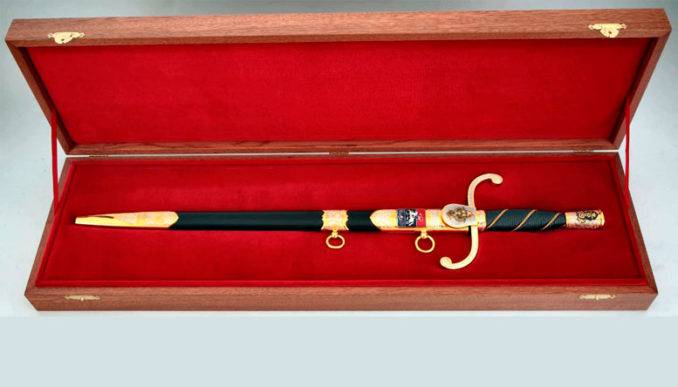 Recreated by the imagination and diligent work of Zlatoust masters, the masterpiece dagger was brought to the Yaroslavl land by the director of the Praktika art studio Viktor Naumov. In a solemn atmosphere, in a church, once erected at the expense of a naval commander, he handed it over for temporary storage to the Bishop of Pereslavl and Uglich - Vladyka Theoktist.

After carrying out measures related to safety, the blade will be forever kept at the head of the grave of the legendary admiral, under whose command 250 years ago Russian sailors destroyed almost the entire Turkish fleet in the Battle of Chesme.

High-ranking naval commanders, our too busy colleagues-journalists, officials did not rush to this event. What for? Or maybe they were not needed where, almost like a family, in a benevolent atmosphere, the parishioners of the church were able to contemplate the return of a relic associated with a person whose name glorified our Fatherland. 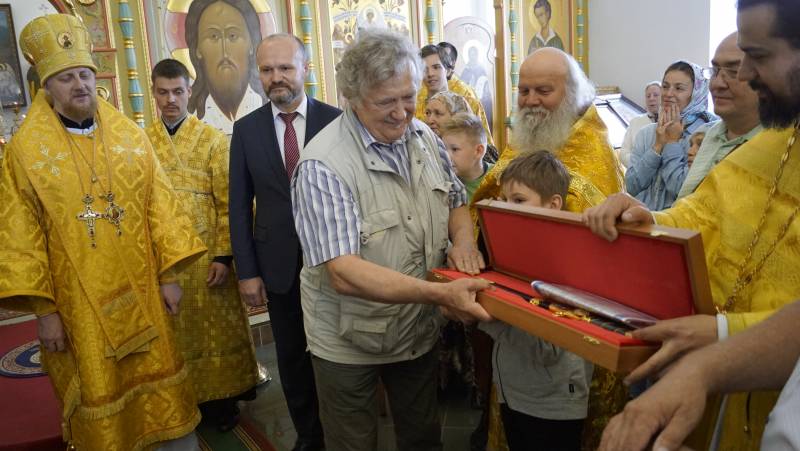 At that very moment, for some reason, I thought: what is Grigory Andreevich guilty of, that they are ashamed and in no hurry to name the avenues of Russian cities, the ships of the Navy, to restore his temple and build highways to it?

And open the naval commander's museum. Of course, on the Yaroslavl land, in the Upland. Where, as Vladyka Theoktist noted, Admiral Spiridov, like many years ago, remains a real master.

Ctrl Enter
Noticed oshЫbku Highlight text and press. Ctrl + Enter
We are
A great interview with Sergey Lavrov: about Ukraine, Obama and IranWhat you didn't want to know about England
Military Reviewin Yandex News
Military Reviewin Google News
13 comments
Information
Dear reader, to leave comments on the publication, you must to register.