The US Marine Corps abandons tanks: optimization or mistake? 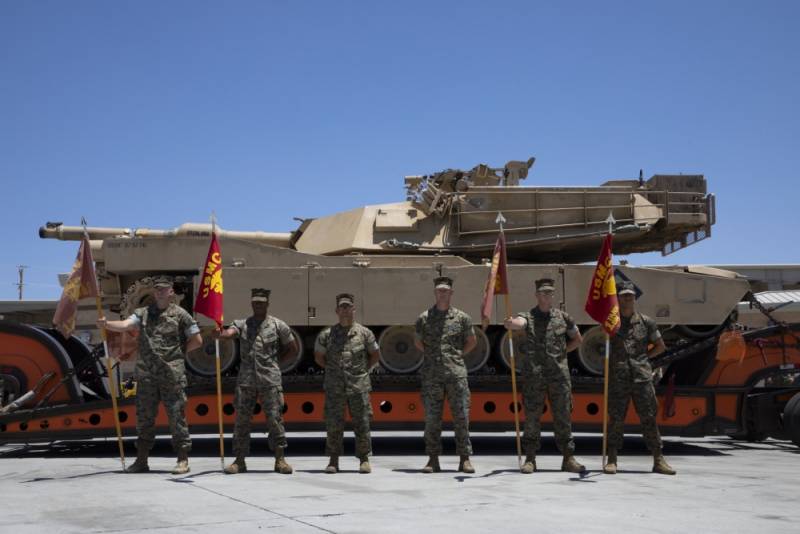 In March, it became known that in the near future the US Marine Corps will abandon the main combat tanks... A few weeks ago, in July, the process of decommissioning such equipment began, followed by the disbandment of tank units. In the new plans for the development of the ILC, scheduled for the coming decades, there was no place for heavy armored vehicles.

In the process of writing off

Until recently, the US ILC had three tank battalions - the 1st, 2nd, and 4th divisions; the numbers of battalions and divisions were the same. In active units and in reserve, there were almost 450 MBT M1A1 Abrams. Despite belonging to not the newest modification, such armored vehicles were successfully used to solve all the main tasks. Also, the KMP owns 80 repair and recovery vehicles M88A1 ​​/ 2.

In early July, real measures were launched to abandon the Abrams. The 1st tank battalion of the 1st division was the first to lose such equipment. The tanks were used at the Marine Corps Air Ground Combat Center Twentynine Palms in California to train personnel. In connection with the change in plans, the need for such "training" MBT disappeared, and they were taken from the battalion. The battalion itself is awaiting disbandment.

On 18 July, the Alpha Company, 4th Battalion, 4th Division "deactivated" ceremony took place at Camp Pendleton. The decommissioned armored vehicles were sent to one of the storage bases. Several more companies of this battalion will be disbanded in the coming weeks. Until the end of next 2021, the 4th battalion, consisting of six companies and headquarters, will completely cease service. 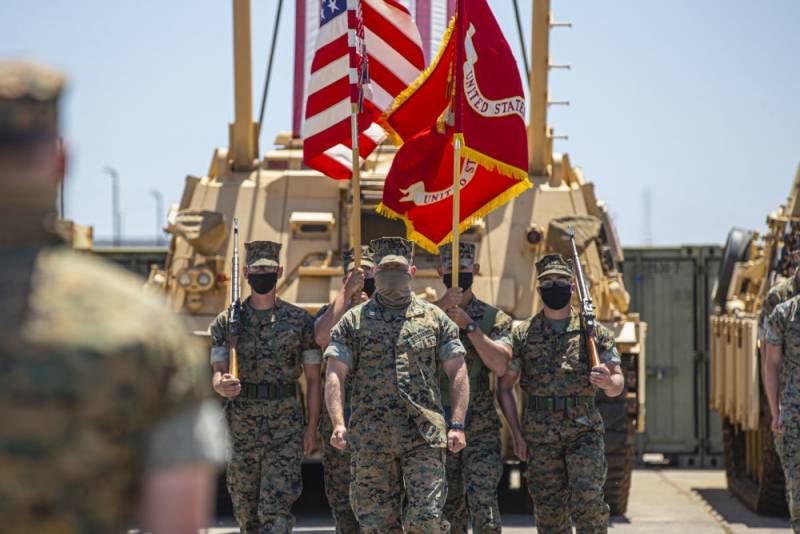 Tankmen of the 4th tank battalion of the 4th division escort the M88A1 ​​armored vehicle. July 18, 2020
At the very end of July, a similar ceremony took place at Camp Lejeune, which put an end to the M1A1 service as part of Charlie Company, 2nd Panzer Battalion, 2nd Division. Similar measures are expected, as a result of which other companies of the battalion will cease service.

Thus, the process of writing off MBT from the ILC parts has already begun and is gaining momentum. In the foreseeable future, all three tank battalions will be "disarmed" and disbanded as unnecessary or reorganized into units for another purpose. For the first time in several decades, the Marines will be left without their own tanks.

Command's current plans for the development and restructuring of the ILC were published in March in the document Force Design 2030. It describes the existing and anticipated challenges and threats, as well as how to counter them and measures to develop the Corps. According to such plans, the abandonment of MBT is only part of a larger reform of the ILC. Almost all Corps structures will undergo reductions and changes.

The authors of the Force Project indicate that in connection with the change in the strategic military-political situation, the Asia-Pacific region will become the main zone of responsibility of the US ILC in the near future. It may even become a new theater of operations. The APR as a theater of operations has a number of characteristic features that impose specific requirements on the capabilities of the ILC.

The Asia-Pacific region is characterized by a large number of small islands, some of which, moreover, are a disputed territory, and a long coastline. In such a theater of operations, amphibious assault forces on an unprepared coast with a quick transition from one piece of land to another are relevant. Similar techniques have already been used during the Second World War. 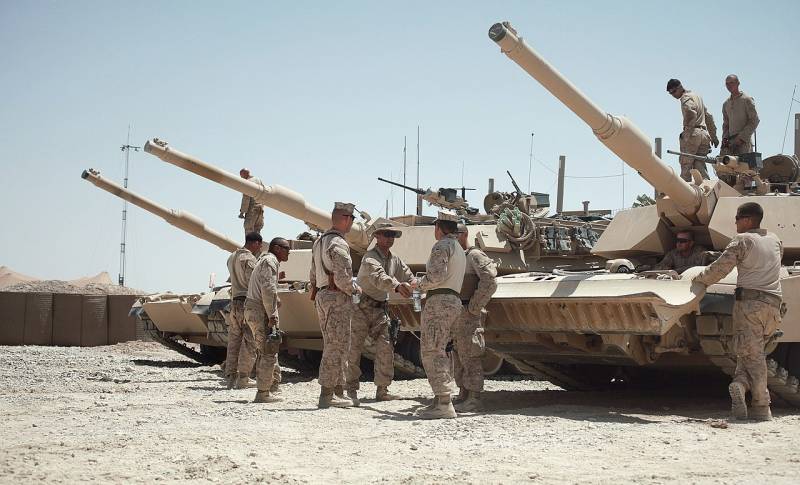 Tanks of the 1st logistic group of the ILC in Afghanistan, 2012
The command of the ILC believes that such operations require a wide range of amphibious armored vehicles for various purposes, and most of the available vehicles meet these requirements. MBT "Abrams", in turn, do not fit into this strategy. Despite their high combat qualities, tanks are not mobile enough and require a special approach, which makes them not very useful in amphibious operations.

The necessity of staff reduction and optimization of the Corps structure is noted. So, in the structure of Fleet Marine Forces, uniting the forces of the Navy and the ILC, 12 thousand people should remain. Infantry battalions will be reduced to 200 people. The active forces will be 21 infantry battalions, the reserve - 6 battalions. Tank battalions are disbanded. The artillery will include 5 batteries with barrel systems and 21 batteries for MLRS. It is also proposed to create 12 light reconnaissance companies and 4 amphibious landing companies. Transformations will be completed by 2030.

Former tanks and armored vehicles of the KMP will be transferred to storage bases. Further, some of the vehicles will undergo modernization and enter service in the ground forces. Also, the released equipment can be sold to third countries.

The ILC refuses tanks due to the specifics of the expected armed conflicts. In recent decades, the Corps has largely supplemented the Army in ground operations, during which it required a full range of armored vehicles, including MBT. 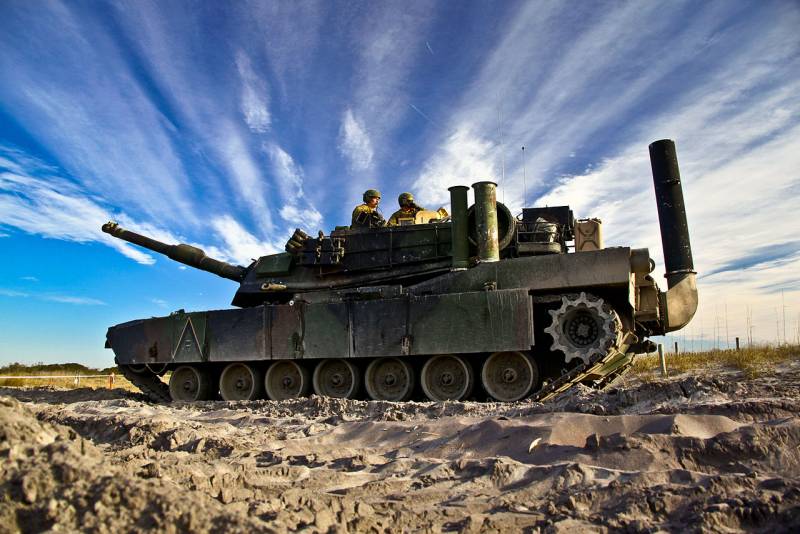 Tank M1A1 of the 2nd battalion of the 2nd division of the KMP, 2013
Operations of a different kind are expected in the future, in which landing craft and amphibious vehicles are of particular importance. The command expects that the planned restructuring of the ILC will provide the required combat capabilities, but at the same time not spend money on the maintenance and operation of tanks - actually useless in the conditions of expected conflicts. If the ILC needs MBT support, it will be provided by ground forces. Moreover, new strategies provide for closer interaction with the Army in joint actions.

Optimization of the organizational and staff structure of the ILC will reduce costs for all major items. In the March document Force Design 2030 it was argued that the savings will reach $ 12 billion, while this is not about the loss of combat qualities and the inability to solve the assigned tasks.

It should be noted that the ILC still used tanks of the old M1A1 modification - this negatively affected the combat potential and led to a lag behind the army with modern M1A2s. The modernization of armored vehicles required considerable expenses, which is why it was never carried out. Thus, the abandonment of MBT leads to additional savings on upgrading equipment.

In defense of tanks

In general, the command views the abandonment of tanks as a useful measure that can positively affect the potential of the ILC. However, this measure turns out to be at least ambiguous. For many decades, the ILC successfully used tanks in different situations and conditions - and no criticism led to their abandonment. 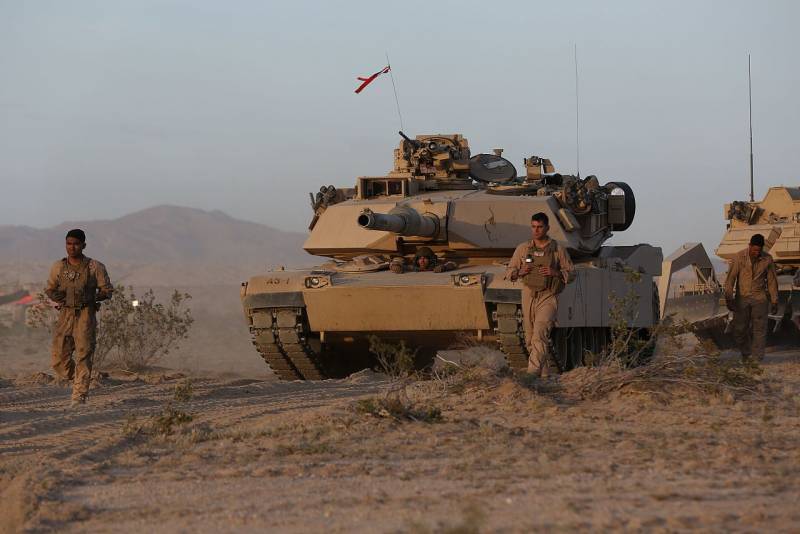 1st battalion in training, 2015
MBT M1A1, despite its considerable age, retain fairly high combat qualities. As recent operations have shown, such equipment is still capable of solving assigned combat missions. Carrying out the modernization would increase its capabilities at reasonable costs.

The lack of mobility argument is questionable. The amphibious ships of the US Navy are capable of transporting a variety of equipment, incl. tanks. Airborne assault vehicles provide the delivery of armored vehicles to the shore - and tanks too. At the same time, the amphibious forces have at their disposal well-protected equipment with high maneuverability and powerful weapons, capable of effectively supporting them. Why a bunch of MBT and amphibious assault vehicles was considered unsuitable for use in the future is unclear.

One way or another, the ILC decided to abandon one of the most convenient and versatile models in the field of armored vehicles. Now the development of the Corps is associated only with light and medium-weight vehicles, which are inferior to tanks in a number of characteristics. It cannot be ruled out that such a difference in parameters and capabilities will manifest itself in a negative way.

The approved US ILC development plan proposes restructuring this type of armed forces and changing the approach to manning the fleet of equipment. The first measures have already been taken in both directions - the decommissioning of tanks and the disbandment of tank companies from separate battalions at divisions have begun. Complete abandonment of MBT will take no more than a few years and will be completed in the foreseeable future.

The Pentagon expects that after all this, the ILC will be smaller, cheaper to maintain and more efficient in the expected theater of operations. How true such forecasts and plans are is an open question. Time will tell where the current reform will lead and how correct it was.

For now, it cannot be ruled out that in the future, after certain events, the ILC will urgently begin to restore tank units and return the Abrams to service. However, now they are rejected with confidence and optimism. Temporarily or permanently is unknown.

Ctrl Enter
Noticed oshЫbku Highlight text and press. Ctrl + Enter
We are
Situational analysis of the death of the MH17 flight (Malaysian Boeing 777), made on the basis of engineering analysis from 15.08.2014Further development of the main battle tank
Military Reviewin Yandex News
Military Reviewin Google News
110 comments
Information
Dear reader, to leave comments on the publication, you must to register.