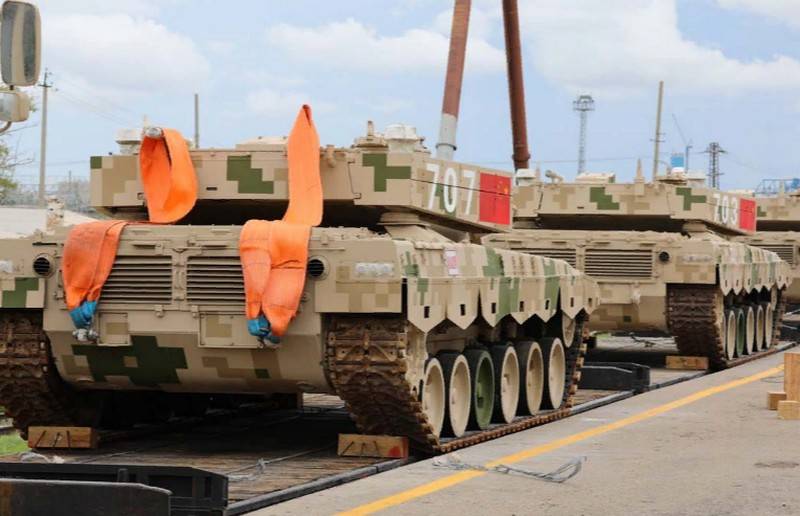 Chinese military equipment has begun arriving in Russia to participate in the international army games "ARMY-2020". The first echelon with equipment for the "Tank Battalion" crossed the Russian-Chinese border and arrived in Transbaikalia. This was reported by the press service of the Eastern Military District.


According to the message, the first train was delivered to Russia Tanks Type-96, on which the Chinese team will perform, equipment for maintenance and repair of tanks, ammunition and logistics. In total, the echelon consists of 18 units of armored and wheeled vehicles, as well as a team of 27 people.

The echelon includes platforms with Type-96 tanks, special repair and restoration and maintenance equipment, wagons with material and technical means and standard ammunition. The same echelon arrived the advance group, including the mechanics-drivers of the tanks, the engineering and technical team of the PLA, taking part in the "Tank Biathlon"
- said in a statement.

All arrivals were tested for the presence of coronavirus infection, no cases were identified.

Let's remind that the international army games "ARMY-202" will be held from 23 August to 5 September. In connection with the coronavirus pandemic, China, Iran, India, Kazakhstan, Mongolia and Sri Lanka refused to host games on their territory.

Thus, instead of 30 competitions on the territory of 11 states, this year 30 competitions will be held on the territory of 5 states: "Warrior of the World" - in Armenia, "Sea Cup" - in Azerbaijan, "Polar Star" and "Sniper Frontier" - in Belarus , "Military Medical Relay" and "Road Patrol" - in Uzbekistan. The remaining 24 competitions, including Tank Biathlon, will be held in Russia.
Ctrl Enter
Noticed oshЫbku Highlight text and press. Ctrl + Enter
We are
In the Russian Federation to participate in the tank biathlon from the People's Republic of China delivered Type 96B by railPresident of the Federation of Tank Biathlon A.N. Stolyarov: “The creators of World of Tanks are going the right way”
24 comments
Information
Dear reader, to leave comments on the publication, you must to register.