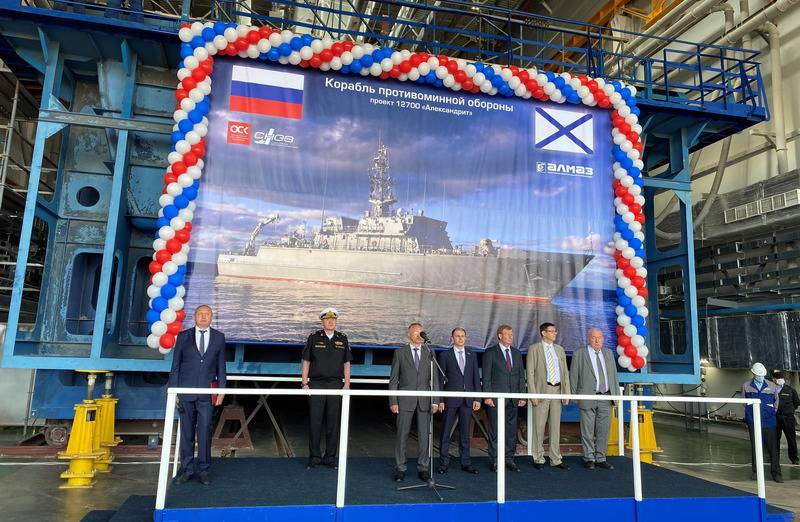 The eighth Project 12700 mine defense ship (code Alexandrite), named Lev Chernavin, was laid down in St. Petersburg. The laying ceremony took place at the Sredne-Nevsky shipyard.


As previously reported, the formation of the hull of the new minesweeper began on July 10. In a hermetically mounted matrix, repeating the contours of the hull of the future ship, under the influence of negative pressure, the binder was impregnated with a binder in a special way laid layers of fiberglass. The impregnation process took about two days. The official groundbreaking ceremony was scheduled for 24 July.

The groundbreaking ceremony was attended by Deputy Commander-in-Chief of the Navy for Armaments Igor Mukhametshin, Chief Advisor to the General Director of USC Viktor Chirkov and Chief Designer of Project 12700 minesweepers Alexander Kalinin.

The new minesweeper will be the eighth ship in the line of Project 12700 Alexandrite, laid down at the Sredne-Nevsky shipyard and the last one built in the first series. Starting from the ninth, the minesweepers of this project will be built taking into account the changes made to the project during the operation of the first ships. The changes will mainly affect the automation of mine action weapons.

Ctrl Enter
Noticed oshЫbku Highlight text and press. Ctrl + Enter
We are
On the Middle Nevsky Shipyard, the formation of the eighth Alexandrite Corps beganThe seventh minesweeper of the 12700 Alexandrite project was laid in St. Petersburg
Military Reviewin Yandex News
Military Reviewin Google News
46 comments
Information
Dear reader, to leave comments on the publication, you must to register.