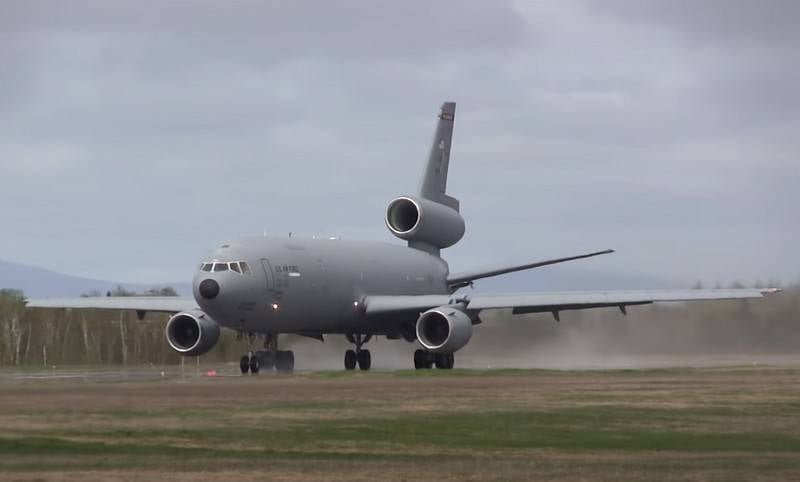 The US Air Force has begun decommissioning the KC-10 Extender tanker aircraft, which are gradually being replaced by the new KC-46 Pegasus tankers. As NPlus1 reports with reference to Air Force Magazine, on July 13, 2020, the Air Force command decommissioned the first KC-10 Extender.


According to the report, the first decommissioned KS-10 tanker served 33 years, having flown more than 33 thousand hours during this time. According to official information, this aircraft, numbered 860036, has refueled about 125 different aircraft in the air during its service.

After a decommissioning ceremony at an airbase in New Jersey, the decommissioned aircraft was sent to Arizona to the 309th Aerospace Maintenance and Repair Group (AMARG) site, better known as the "aircraft graveyard."

The Extender fuel-refueling aircraft was developed in the late 70s of the 20th century on the basis of the DC-10 passenger aircraft. Introduced into service in 1981. The aircraft is 55,4 meters long, has a wingspan of 50,4 meters and a height of 17,7 meters. The flight speed is 866 km / h, the flight range is up to 7,1 thousand km. Max. takeoff weight - 268,9 tons. The KC-10 is capable of carrying up to 165,5 tons of fuel.
Ctrl Enter
Noticed oshЫbku Highlight text and press. Ctrl + Enter
We are
Reports from the militia of New Russia for 27-28 September 2014 of the yearYuri Drozdov: Russia prepared the role of the sacrificial calf
Military Reviewin Yandex News
Military Reviewin Google News
40 comments
Information
Dear reader, to leave comments on the publication, you must sign in.