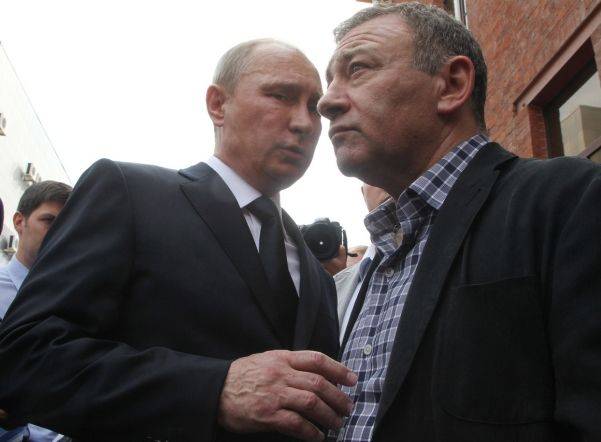 We are building versions here, breaking spears: why would the people suddenly defend the Khabarovsk governor when he is a bloody murderer ... It even sounded that the Kremlin was afraid of Furgal's growing popularity and decided to press him down. No, judging by the protests of many thousands, Furgal will indeed be more popular than many Moscow “stars”, because where is Moscow and its “stars”, and where is Khabarovsk. And Khabarovsk in the Far East and the governor in the same place.


But everything turned out to be much simpler. Nothing personal, it turns out, just money. More precisely, not even money. SUM.

Alas and ah, but Furgal simply has no chance to stay free in any scenario. He (it is difficult to say on what grounds) crossed the path of the so-called judo clan. Therefore, in the words of the film hero Gleb Zheglov: “He will sit! I said so! "

But let's start in order. There is such an enterprise in the Far East called Amurstal. Amurstal is the main supplier of metal in the entire Far East. It doesn't matter where: for the construction of ships, planes, bridges ...

Who said the word "bridges"? I AM? Well, it didn't just happen. In bridges, you know, the whole point lies.

Have you heard about the project of the bridge to Sakhalin? They left the tunnel to dig in due time, ferries are not very reliable, especially in storms and in winter, they decided to build a bridge. The Sakhalin governor was strongly opposed, but then he changed his mind. We will build.

This type of bridge requires metal. It takes a lot of metal. And Amurstal can give it very easily. He, the plant, was built for this, actually.

But lately things at the plant have been going very badly. Very bad. The enterprise is in a fever, and it is in a very specific fever. Although before 22 billion rubles in revenue per year - this was normal.

The question arises: where are the owners looking?

And yes, who are the owners? And all the familiar faces! But I will unscrew the timeline a little back, to the beginning of the described events, to the year 2017. The list was like this:

In 2018, Furgal wins the governor's elections, wins overnight and is said to be inconsistent. And immediately after the victory, he and his partner Mistryukov received a very “profitable” offer: to part with the shares of Amurstal. And so everything turned out well with Furgal, you can survive and not become impoverished.

As everyone understood, Furgal and Mistryukov refuse. And in 2019, Mistryukov is arrested, transported to Moscow and there they begin to "work" with him. As a result, the crushed and broken Mistryukov refuses lawyers, refuses to meet with his wife and relatives, refuses everything and begins to testify against Furgal.

And at the same time it transfers its stake in Amurstal in favor of Mr. Balsky, which we will talk about a little below.

After that, with a sigh of relief, a task force arrives from Moscow to Khabarovsk, packs Furgal and also takes him to Moscow. Investigate his participation in cases in which the statute of limitations has expired, but what does the law have to do with when 25% of the shares are at stake?

By the way, the day after Furgal's arrest, the owner of the stake, Larisa Starodubova, received an invitation to the court in the case of the repudiation of her shares in favor of Balsky. For neither she nor Furgal are worthy to own shares ...

And by that time Pavel Balsky had already "bought out" from the arrested Mistryukov his 25% stake in Amurstal. As it became known in February 2020, the deal was made in a pre-trial detention center with the help of Mistryukov's wife.

Of course, the SIZO is the place that, like no other, is conducive to such deals. And I won’t ask the question of whether Mistryukov was placed there, so as not to rock the boat. And it's so clear.

So, Pavel Balsky becomes the owner of a 75% controlling stake in Amurstal. At the end of the article I will give several links to materials that explain very well who Pavel Balsky is.

And it was with these structures (plus NPO "Cosmos" Chernyakov) that the scandals were connected with the construction of the multifunctional complex "Academy of Judo of Russia", where in total more than 200 million rubles were stolen and "saved". However, this is completely different история, and the numbers in it are not as remarkable as in the Amurstal case.

However, the hen pecks by the grain.

Balsky comes to manage Amurstal, and problems begin there. But then Balsky had only 50% received from the Rotenbergs, and he just wanted to sell shares to three Chinese enterprises for about 2,6 billion rubles, and the idea was blocked by Furgal and Mistryukov.

Now no one will stop Mr. Balsky, but ... a bridge project loomed.

In general, of course, there is a lot of vague things in history. As the lawyers say, the main problem of the pre-trial agreement between the accused and the investigation is that, according to Article 90 of the Code of Criminal Procedure of the Russian Federation, decisions of other courts in respect of a person are prejudiced. That is, what the person and the bodies of inquiry concluded between themselves, the facts on the basis of which the agreement was concluded, are not verified by the court.

Prejudice is the obligation for all courts considering a case to accept, without checking the evidence, the facts previously established by a court decision that entered into legal force in another case in which the same persons are involved.

And from here comes a very wide field for variations. Judge for yourself:

Since the pre-trial agreement presupposes a special procedure, the court does not study the facts, but only certain circumstances. For example, the appearance of the defendant: was the defendant brought to justice earlier, the severity of the crime, etc.

The people will protest.

So it turns out that all these fabrications about Furgal's exorbitant rating, his independence, a low percentage of votes for Putin (okay, for his constitution), a criminal past are all stupid nonsense. Nonsense in vegetable oil.

Khabarovsk Territory is KNAAPO, shipyards and Amurstal. This is money. This is a lot of money. And because of money all over the world, not only governors were imprisoned for nothing. They killed, you know ...

And this is what a luxurious chain we have. To the disappointment of those who like to drag the Kremlin, Putin and everything else here.

The Amurstal plant is a smithy for the entire Far East.

In 2017, the Rotenbergs transfer / sell (it doesn't matter) their 50% to Pavel Balsky. Sergei Furgal transfers his share to his wife Larisa Starodubova, as he is going to run for governor.

Pavel Balsky is going to sell his 2019% to the Chinese in 50, but other founders are hindering him.

“Suddenly,” the security forces came to the plant, and Mistryukov was arrested. In the detention center, he "sells" his share to Balsky.

Balsky changes his mind about selling his shares to the Chinese. Is it because the main bridge builder and hero of labor is going to build a bridge to Sakhalin?

The interest of Balsky and the Rotenbergs behind him is obvious: why should the judo gentlemen divide the sums by four, if it is possible by three?

And if Furgal was suddenly imprisoned, then obviously the shares would be cheaper and there would be less noise. Well, how did it happen with Mistryukov.

And suddenly again in Khabarovsk are the Moscow security forces, who knit Furgal and deliver to Moscow. Where it is very convenient to carry out multimillion-dollar deals with shares in a pre-trial detention center. Safely guarded.

Furgal's arrest took place on July 9, 2020. It's funny (if it weren't so sad) that exactly on the same day Furgal's wife receives a lawsuit demanding to declare bankrupt the company to which 25% of Amurstal are registered.

That's all. No politics, no popular rating for Governor Furgal. Obviously no murders. Just money, nothing personal.

This is how the good (according to the Khabarovsk residents) governor Sergei Furgal was removed from behind the bridge to Sakhalin. The opinion of the people, of course, is good, but only when it is needed. For example, vote for amendments to the constitution. For the rest of the opinions, there is the National Guard, the police and the courts.

I wonder if the opinion of the Khabarovsk residents really reaches Moscow? What will happen? Will gentlemen judokas get even a reprimand for removing Furgal so rudely and unprofessionally?

Or will it do?

Let's see the development of events. How and where we will live tomorrow depends on what they show.

I recommend you read: https://compromat.group/main/investigations/27400-v-bitve-za-amurstal-vyrisovyvaetsya-pobeditel.html.

Ctrl Enter
Noticed oshЫbku Highlight text and press. Ctrl + Enter
We are
A great interview with Sergey Lavrov: about Ukraine, Obama and IranWhat you didn't want to know about England
Military Reviewin Yandex News
Military Reviewin Google News
306 comments
Information
Dear reader, to leave comments on the publication, you must to register.