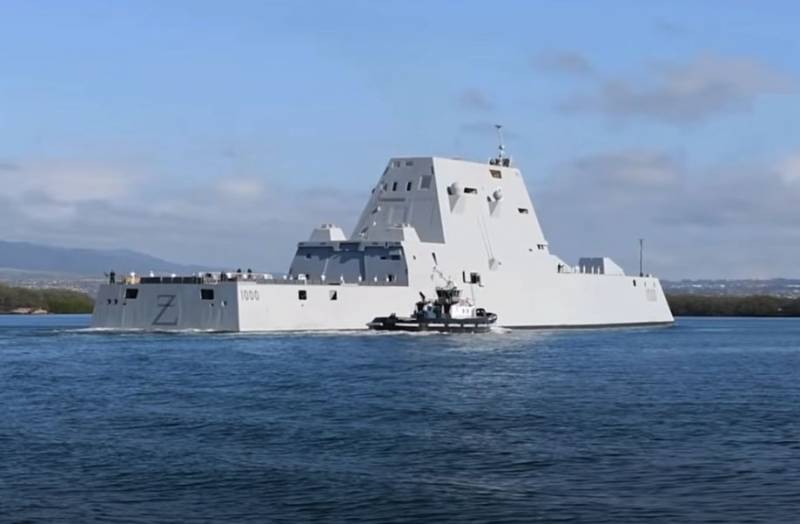 The Western press published an interview with the commander (in the American tradition - the captain) of the stealth destroyer USS Zumwalt (DDG-1000) Andrew Carlson. The interview discusses the goals that the command sets before the newest ship of the US Navy. This discussion is particularly noteworthy due to the fact that in the USA itself, destroyers of the Zamvolt type have been criticized recently. The fact is that if initially they were positioned as ocean-type attack units, now the command has determined a niche for them to support landing operations.


According to Captain Carlson, the USS Zumwalt is a unique warship that represents “a new milestone in the confrontation between the leading maritime powers.” According to Andrew Carlson, the ship had to go through a large number of adjustments, changes, including adjustments to the main objectives of its use.

Question from the correspondent:

What would you call the unique control problems of this ship and its crew compared to most other ships?
Andrew Carlson:

Of course, a process control with full confidence in automation comes to mind, the integration of advanced technologies with a minimum staffing option. However, none of these problems is unique to Zumwalt.
According to an American naval officer, a trained crew is urgently needed for the USS Zumwalt, which is constantly improving its skills.

In an interview, it was noted that while the campaigns of the head "Zamvolt" are actually carried out in an experimental (experimental-combat) version. The crew is exploring the capabilities of a warship equipped with tactical strike weapons.

The crew is mastering new technologies. They are everywhere. The organization of the power supply system, automated control systems, even the case itself is a completely new configuration.
The DDG-1000 commander was asked how to motivate the crew of a warship whose capabilities (Zamvolta) are not used 100 percent.

According to Captain Carlson, the sailors understand that at this stage the ship will be deployed in an experimental version and that in any case they will have a lot of work to do. Andrew Carlson added that the DDG-1000 Zumwalt is “fully prepared for war at sea” and “has the advantage of missile weapons and reduced visibility.”

Andrew Carlson notes that the ship has low radar and thermal (infrared) visibility. The second is achieved by a new system of energy consumption and spent fuel emissions.

The privilege of commanding a concentrated group of talented, mature and cheerful sailors reinforces the ongoing understanding of the principle that people in any case mean more than systems on board a warship.
Ctrl Enter
Noticed oshЫbku Highlight text and press. Ctrl + Enter
We are
Reports from the militia of New Russia for 27-28 September 2014 of the yearInterview of Vladimir Putin with Radio Europe-1 and TF1
Military Reviewin Yandex News
Military Reviewin Google News
62 comments
Information
Dear reader, to leave comments on the publication, you must to register.