Furgal as a new unit of measure for Russian reality 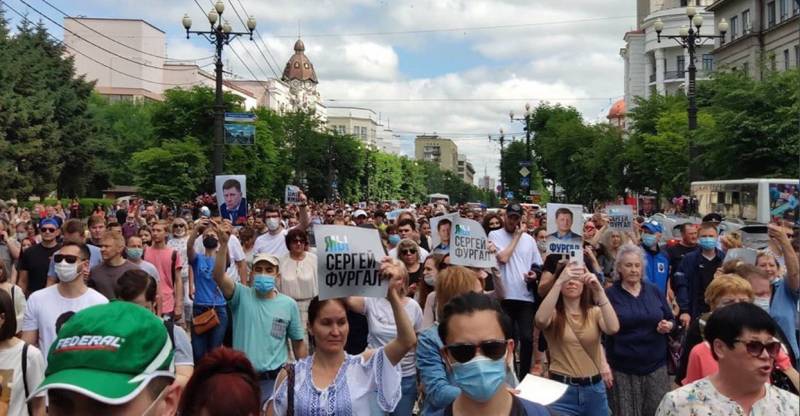 So, it seems to me, it's time to introduce a new unit of measurement - Furgal. A certain indicator of a person’s usefulness at a post in relation to how a person treats a person.


To Furgal, the former (I hope temporarily) governor of the Khabarovsk Territory, the federal government is obviously very negative. This is evident even from the way the head of the LDPR Zhirinovsky “fought” for his subordinate. Apart from a couple of air shocks - nothing. But when people came to the defense of their governor, the head of the LDPR quickly rushed to make excuses that the party had nothing to do with the rallies.

Of course it’s right. For such things and a membership card, you can put it on the table. In our case - the certificate of the State Duma deputy. And goodbye, a well-fed and relaxed life ... There is something to worry about.

Why did it all turn out that way?

Having carefully examined what they write on Far Eastern forums (well, don't watch TV, after all?), I understood one thing: the whole fuss due to the fact that Bumblebee Furgal rebelled against honey. The bees were worried. It was why.

The main problem of Furgal is that he began to work. And to work not in the way that is generally accepted among officials in general and governors in particular. He encroached on the most sacred that the official has: his comfortable work.

Here, in the list that I will give further, lies the answer to why Moscow so hastily decided to remove, punish, and imprison, and the Khabarovsk residents went to the streets.

Moreover, it is not authorized, without any incitement from the same Dark Lord N and cookies from any European human rights organizations. Took and went out. And they will come out again and again.

In order to answer this question, you just need to familiarize yourself with what Governor Furgal managed to do in two years:

- I cut twice the supplements to the pensions of regional officials and deputies, the chairman of the regional Duma and ... the governor. That is, to yourself. This is only 9 million rubles that Furgal promised to send for social services. 9 million. Nevertheless;

- forbade members of the regional government to purchase tickets on business class business trips - only economy. An exception was made for the first three deputies;

- made a major change to the regional housing program for young families. The region paid 35% for housing for young families. There was a queue, since all young people need housing. Who did not have time to get a benefit until 36 years old, just flew like plywood over Khabarovsk. The wagon removed this restriction;

- canceled the double menu for schoolchildren. That is, it used to be like this in schools: ordinary people have one menu (richer), beneficiaries (from the same large families) are pretty modest. Now the menu is one at all.

An interesting case occurred here. In Komsomolsk-on-Amur, local officials rebelled. Well, there is no way to find as much as 5,5 million rubles for lunches for schoolchildren. Not a rubber budget in the city!

At the next meeting, Furgal asked where the city had taken 24 million to support the officials themselves. In 2018, the maintenance of the device cost 510 million rubles, and in 2019 - already 534 million.

Great, right? Officials found 24 million for themselves somewhere, but 5,5 for children could not.

Such a beautiful picture of modern power. At 60 wagons pulls, if so. 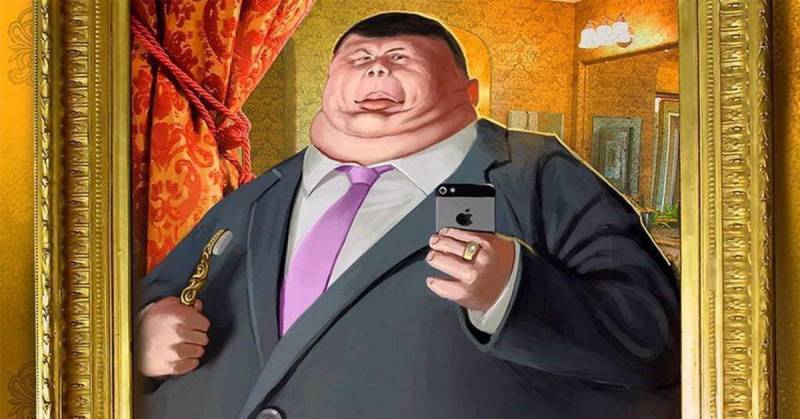 - Launched a program for all residents of the Far North and equated to them, 4 flights a year for discounted tickets: 3 thousand for a child, 4,5 for an adult. Paying, of course, from the regional budget;

- ordered the cancellation of the results of suspicious public procurement auctions in the total amount of 150 million rubles;

- conducted a reduction in the apparatus of the regional government, which in terms of savings yielded about 600 million rubles a year. Reduced 4 regional ministries from 20;

- the prosecutor’s office very much made me think about what to do with construction companies that deceive equity holders;

- issued over 2 years 580 apartments for orphans. Who does not understand: a person from an orphanage, entering a mature life, has the right to housing from the state. And the regional state is obliged to provide him this housing. At my own expense. I don’t know how much the most shameful “odnushka” costs in Khabarovsk, but it costs money;

- put up for sale (so far, however, no buyer was found) the yacht Victoria, which was on the balance sheet of the regional administration. Only the maintenance of this vessel cost the treasury 600 thousand rubles a year. Probably not for sale, but the initiative is good;

- revised quotas for fishing, logging and export of forests.

In general, as I understand it, scrolling through the repair of bridges, the construction of oil refineries, the repair of schools and kindergartens, and the payment of debts to the budget (they reduced the debt of the region by 2 billion rubles over the past year), it becomes completely unclear how this could have happened. In theory, it was not the investigators who needed to be hired, but the killer. 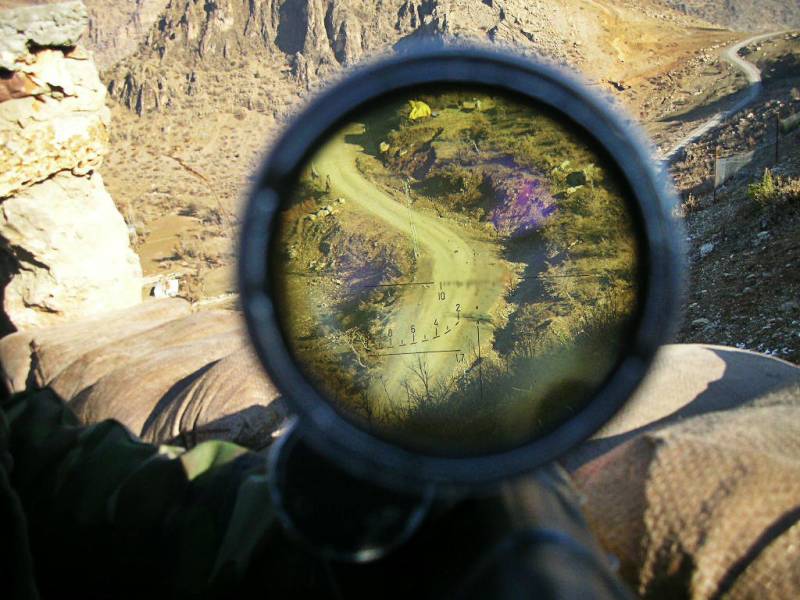 The situation is very unsightly: a governor working for the people! Not only does he do, he does more than he promised! And he is not United Russia, he is from the side.

And, by the way, the test for “amend the Constitution” in the Khabarovsk Territory clearly also failed. 44% turnout, 62% “for” amendments. Not good. Ugly. It was said by ourselves that 70%.

And it turns out that somehow, on the other side of the country, a decent person appeared in power, who, moreover, didn’t steal like that, but also didn’t give others! Moreover, complicates the life of officials in full!

In general, the situation is not simple. Creates tension and doubt at the same time.

And at such a time, unexpectedly, probably even by accident, the former business partner of Sergei Furgal, Nikolai Mistryukov, accused of murder, makes a deal with the investigation and reports about the terrible crimes of the Khabarovsk governor 15 years ago.

And now, both former partners are sitting in Lefortovo. How - at the end of the article I will give a link to an interview conducted by members of the PMC (Public Monitoring Commission, whose functions include monitoring the places of detention) both from Furgal and from Mistryukov.

Perhaps the employees of the PMC were somewhat biased towards Mistryukov, but I also do not really believe in his sudden insight and recognition. Apparently, they do not believe in Khabarovsk, because they continue to take to the streets. Violating, by the way, the law.

It all somehow happened in a timely fashion: Mystryukov “remembered”, and our investigation worked so quickly ... Although it is already surprising how quickly it (the investigation) and without particularly bothering to check, grabbed Furgal. Indeed, how not to believe the former companion ... who faces a strong sentence of such murder?

It's an old song, but since our bodies promised to knock down / weaken, you know - and you’ll write something else. Especially if everything is really as Mystryukov says in an interview. But still face to face ...

But we are talking about Khabarovsk.

I drew attention to the numerous videos from there that not everything is good in the city. People take to the streets, people speak in support of their Furgal. People applaud and chant “Thank you!” When police officers pull out provocateurs from the crowd.

But there are provocateurs.

These are the real provocateurs who shout “Putin is a thief!” - here they are for a reason. Here they should not just be displayed, but interrogated. With an addiction. Because everything that happens can be written down and served to whom it is necessary (yes, Putin) under the proper sauce.

And this dish is unlikely to appeal to the Khabarovsk residents.

What is happening causes a dual sensation. The rapid landing of Furgal, the arrests of five disabled pensioners, "who were preparing the seizure of power in Omsk" (Kvachkov found followers), all this causes some misunderstanding of the situation.

That’s how the boat is rocking. Not by criticizing the government, which has anything to criticize, not by criticizing Putin, who has something to present. It is these hasty and incomprehensible arrests that are rocking the Russian barge.

What was taken from the residents of the Khabarovsk Territory? They took away the prospect that Furgal gave them. I believe that in the place of the governor there may be a person who will work for the people, and not for his own pocket.

Such a man was found. Thank God, in our country this is a Red Book beast, but not disappearing yet. And such a result ...

Having read a lot of reviews on social networks from Khabarovsk citizens, I understand that I would like to have my Furgal in Voronezh. Honestly and frankly - yes, I would like to. And I’m not sure that he is a killer, as they try to present it. Rather, I believe that he is really objectionable. And not even Putin, not even the Kremlin. His local.

I am for Sergey Furgal. Until he confessed to the murder - unconditionally “for”, because deeds speak better of words about a person. And I fully support the Khabarovsk residents in their desire to fight for their governor.

The position of many media is very strange. They show as if there a bunch of renegades stirs up water. Well, as usual. Meanwhile, the people are really against the "cleaning" of Furgal. 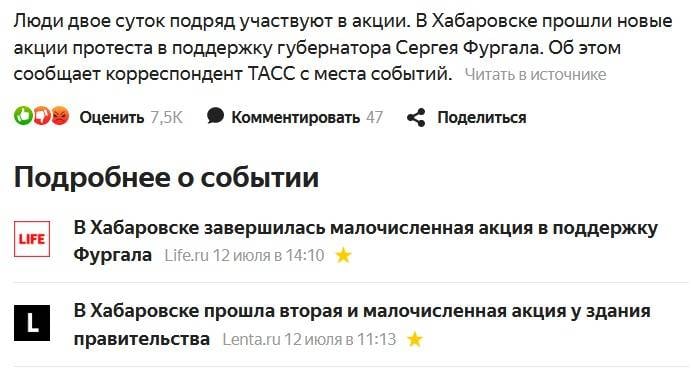 But news agencies show this as the intrigues of the Dark Lord Ny, nothing more.

The situation is not very beautiful. And it can grow into something more. I am pleased to see how the police politely and correctly perform their duties, I am pleased to understand that no one rushed to fulfill the requirements of the envoy of President Trutnev, who urgently flew to Khabarovsk. In the sense - to disperse.

First, the investigation is simply obliged to bring charges, evidence, etc. Because while the picture is not very attractive. Ugly.

“If the court and the president of the Russian Federation decide that Sergei Ivanovich Furgal will no longer work as governor, then, accordingly, there will be elections ...”
(Yuri Trutnev, Presidential Plenipotentiary.)

And here he is, the choice of the people. On the streets. Chanting, honking. Waiting. In their "small" rallies. 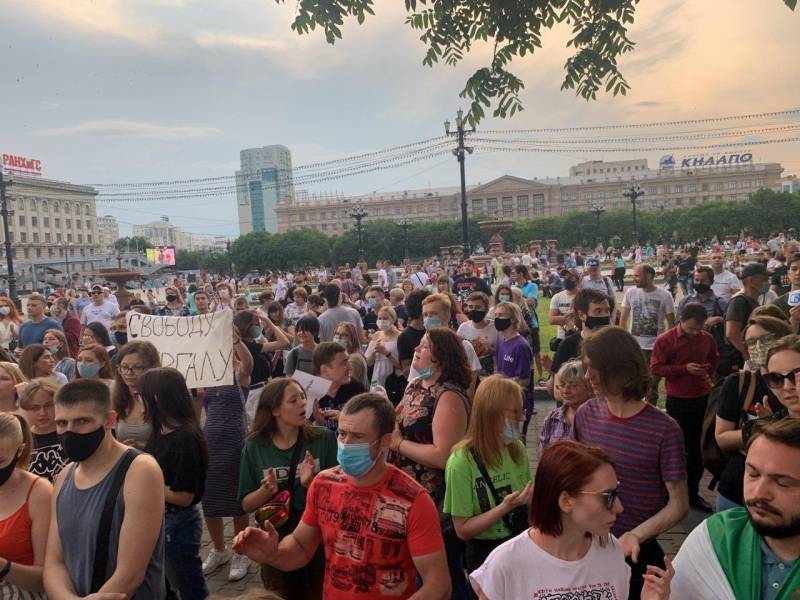 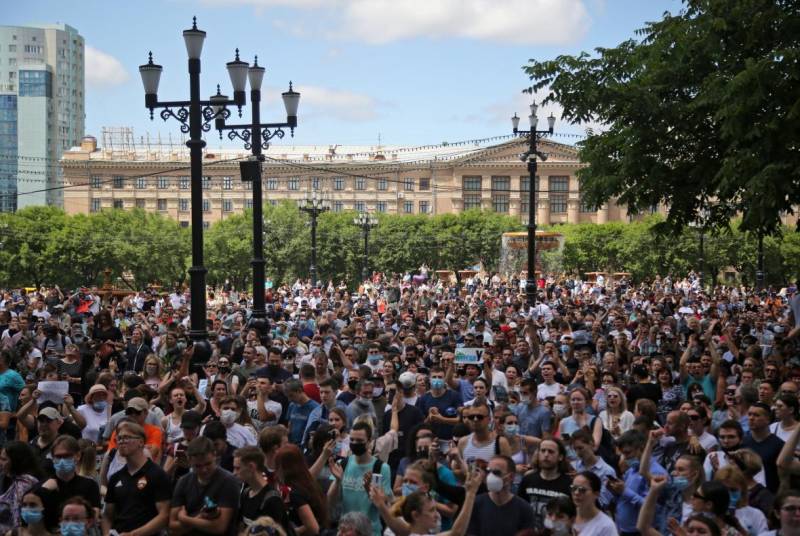 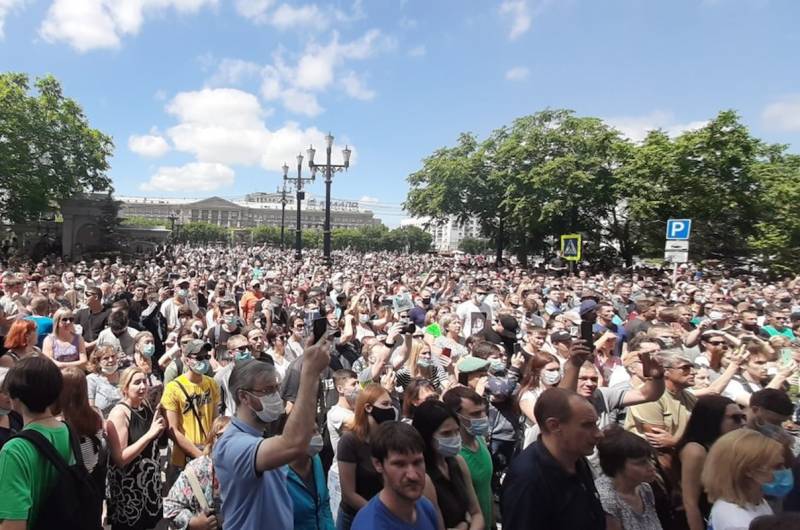 Putin is obliged to intervene and to deal with the situation. He, like no one else in Russia, is interested in this.

Recommended by:
The furgal opened up behind bars, Mistryukov fell ill with cancer and partially went blind.

Ctrl Enter
Noticed oshЫbku Highlight text and press. Ctrl + Enter
We are
About Stalin and KhrushchevWhat you didn't want to know about England
Military Reviewin Yandex News
Military Reviewin Google News
189 comments
Information
Dear reader, to leave comments on the publication, you must to register.