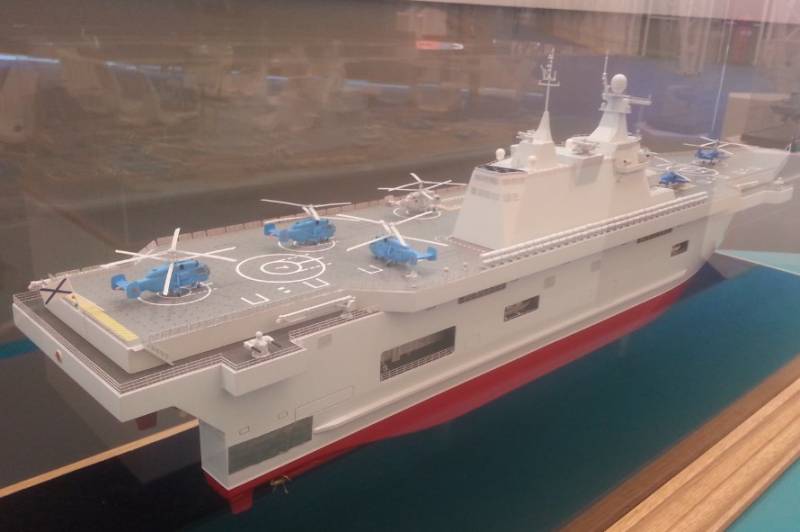 Pre-simultaneous laying of six ships, including universal landing, was planned for April 28, but this was prevented by a pandemic. Dates have shifted somewhat.


The construction of the UDC, also called helicopter carriers, as previously reported, will be undertaken at the Zaliv Shipyard in Kerch. The first ship will be called "Sevastopol" (under the name "unreceived" "Mistral"), and the second has not yet received its name. Perhaps Vladivostok. One of them is intended for the Black Sea fleet, the other is for the Pacific. Never before in the Russian Federation or in the USSR have such projects been undertaken.

One helicopter carrier can accommodate about a thousand marines, six landing boats, dozens of armored vehicles and more than 20 helicopters. A helicopter dock will be equipped with a dock. The cost of two ships will be about 100 billion rubles.

Surf instead of Mistral

Initially, they did not intend to build UDC in Russia, but the need forced it. This mission could seem impossible for several more years, but now, apparently, there are projects and developments.

It must be recalled that Moscow ordered the construction of two Mistral helicopter carriers in France. The contract was signed in 2011, but after the Crimea entered the Russian Federation in 2014, the United States and the European Union began to put pressure on our country with sanctions, so Paris demanded that the deal be canceled. The agreement was broken in 2015, paying money, after which Russia decided to build helicopter carriers on their own. 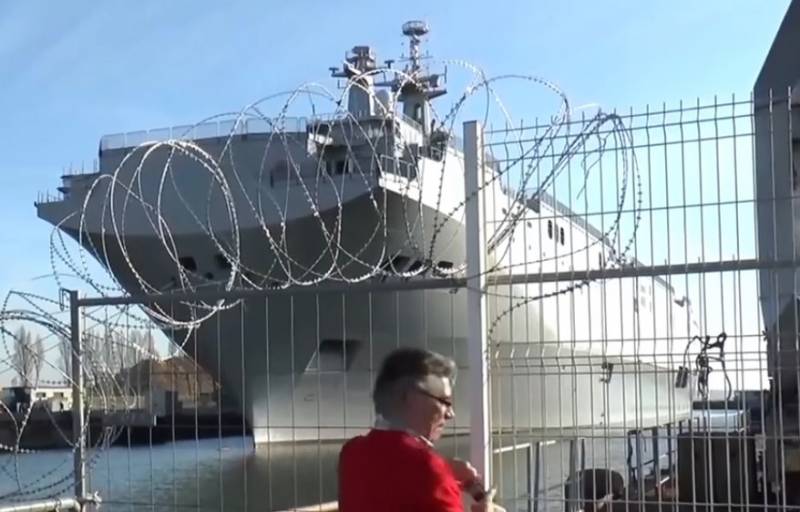 Two UDC projects were presented to the military sailors, one of them was chosen under the name “Surf”. The construction of two ships under this project was included in the state program for the period 2018-2027, and the contract for construction between the Russian Ministry of Defense and the Zaliv plant was concluded in 2020. The first helicopter carrier should be transferred to the fleet in 2026, and the second - in 2027.

Although the UDC is very similar to an aircraft carrier, its purpose is completely different. In short, it is intended for landing amphibious assault forces on the enemy’s coast using helicopters and boats. But in fact, such a ship is capable of performing a much wider range of tasks.

It can accommodate attack and transport helicopters, marines, armored vehicles, landing boats. In addition, the helicopter carrier is equipped with facilities for accommodating personnel, equipment, ammunition, food. There is a command post and a hospital with operating rooms. That is, it is not only a delivery vehicle, but also a warehouse, headquarters, medical institution. The word “universal” characterizes it most precisely.

During the landing, floating armored vehicles in combat order can leave the ship and land on the shore. Non-floating - delivered by boats. Attack helicopters support the landing of troops by fire, while transport helicopters deliver airborne forces by air, for example, to the rear of the enemy defending the coast.

There is also the option of using UDC for escorting sea convoys. In this case, they should have anti-submarine helicopters on board.

UDC - the main component of a universal combat system

The new Russian helicopter carriers will be a valuable acquisition for our Armed Forces, although this value is disputed by many experts. But the presence of only warships is not enough. They will require the development or modernization of equipment that will be used in conjunction with helicopter carriers.

For example, you need a floating naval combat vehicle. This is technically not an easy task. Then it’s worth considering the creation of a new landing craft or, perhaps, the modernization of an existing model.

There is no problem with an attack helicopter, because there is a modern combat vehicle with excellent technical characteristics - Ka-52K. With transport helicopters suitable for solving the tasks facing UDC, the situation is somewhat more complicated. There is a project to create the Lamprey marine helicopter, but lately almost nothing has been heard about it.

It can be assumed that, if the laying day of the new Russian helicopter carriers has already been determined, then they also thought about creating other technical means necessary for the effective use of these ships in the defense industry. Therefore, we should soon expect the announcement of the projects of landing boats, combat vehicles of marines and other equipment.

Ctrl Enter
Noticed oshЫbku Highlight text and press. Ctrl + Enter
We are
The construction of universal landing ships for the Russian NavyShip for all occasions
Military Reviewin Yandex News
Military Reviewin Google News
48 comments
Information
Dear reader, to leave comments on the publication, you must to register.