LDNR: instead of ideology - a circus for budget money 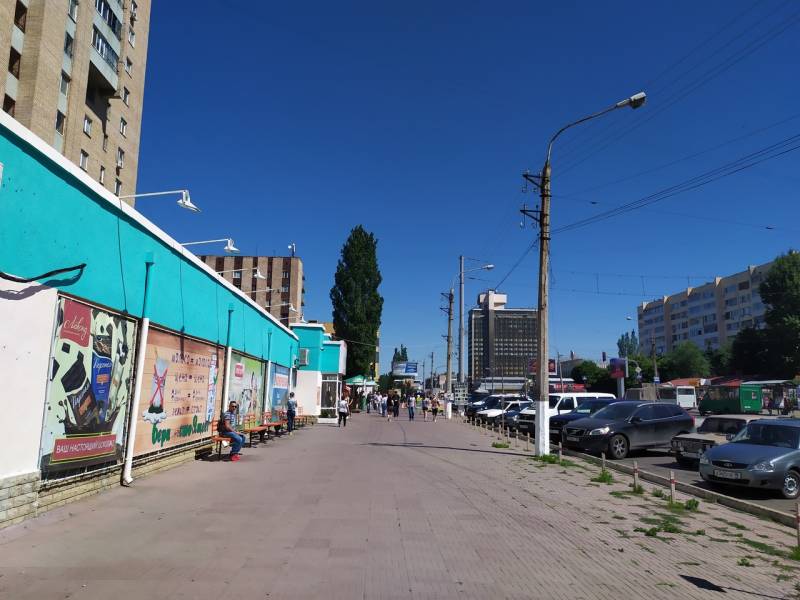 In June, "Military Review" wrote about how the director of the Lugansk secondary school No. 8 Lyudmila Bryantseva designed her Facebook account in a frame with the inscription in Ukrainian, "Dyakoy Mom!" and distinct symbols of the Russophobic and nationalist party “Ukrainian Galician Party”. Has Bryantsev been dismissed and have any sanctions been applied to her? This will become known at the beginning of the new school year. But now it’s already clear that local “public men” are doing their best to disown Bryantseva, claiming that the whole school director could work independently, not being a member of the structure, membership in which is mandatory for all civil servants and state employees.

Soon after the publication, the Lugansk functionaries of the public movement “Peace of the Luhansk Region” disseminated information that Lyudmila Bryantseva allegedly was not a member of the OD. As if this completely invalidates the support of Ukrainian nationalism by the headmaster! The attempt to clean the ranks in hindsight is logical and understandable, however, in this situation, obviously did not play into the hands of those who tried to whitewash the movement.

The whole thing is that working in a position, much less a managerial one, and not being a member of the Mir Mir Luhansk Oblast OD (in the case of the DPR, the Donetsk Republic OD) is practically impossible. There are isolated cases, but almost 100% we are talking about a trivial bribe or the presence of connections among senior officials in the government or in the leadership of the movement itself. That is, claiming that the disgraced headmistress Lyudmila Bryantseva was not a member of the organization, in which all budget employees and managers are without exception, representatives of the social movement once again set themselves up.

By themselves, the social movements of the LPR and the DPR are an attempt to replace thoughtful ideology with loud slogans and circumvent the semantic lacunae dictated by the Minsk agreements and the realities of the difficult situation in the republics. In principle, no one began to reinvent the wheel, but something was created that resembles the ever-memorable Party of Regions, which, if scratched, can easily be compared with the CPSU.

“Peace to the Luhansk region” and “Donetsk Republic” are also obligatory for all those working on the republican kosht, they are also engaged mainly in meaningless cultural events and aimless boltology, hold endless rallies and are absolutely sterile in terms of ideology or just some kind of socially useful activity, not counting rare insights when local activists are doing something really useful: they help veterans, look after memorials, etc.

The very case when, instead of promoting the formation and development of civil society, officials took the path of least resistance, giving rise to a still-born ersatz, which, unfortunately, causes the majority of the population to be rejected and perplexed. Why spend budget money on this if the treasury is already empty?

Formalism, empty budget consumption and other shortcomings traditional for such structures are quite understandable and even a little excusable, given the situation. Another is unforgivable: in the ranks of these organizations there are a lot of incomprehensible people whose loyalty to the republics is very doubtful. Moreover, the headmaster of the school, specially or by sheer thought of honoring Ukrainian nationalists, is still not so scary. There are "frames" that are much more dangerous.

In the LPR and DPR under the auspices of social movements and on budget money, there are a number of groups in social networks whose policies are clearly directed against the government of the republics and Russia. From the more or less objective “Lugansk insider” in the LPR to the completely chauvinist “For the Power is a shame” in the DPR. Moreover, the latter, eating at the expense of the republic, not only actively pours mud on LDNR and Putin, but also openly calls for the destruction of LDNR in order to “then build something better, new.”

A reasonable question arises: how much longer will all these strange people and organizations uniting them smoke the skies of the republics? Is there really nothing more to spend the available funds on? And will not these social movements be a refuge for the enemies of the republics and Russia? Won't they, radiating false patriotism, harm as much as possible, working for the good of Ukraine?

Ctrl Enter
Noticed oshЫbku Highlight text and press. Ctrl + Enter
We are
Situational analysis of the death of the MH17 flight (Malaysian Boeing 777), made on the basis of engineering analysis from 15.08.2014Results of the week. “In our cooperative, the board is always agreed”
Military Reviewin Yandex News
Military Reviewin Google News
93 comments
Information
Dear reader, to leave comments on the publication, you must to register.