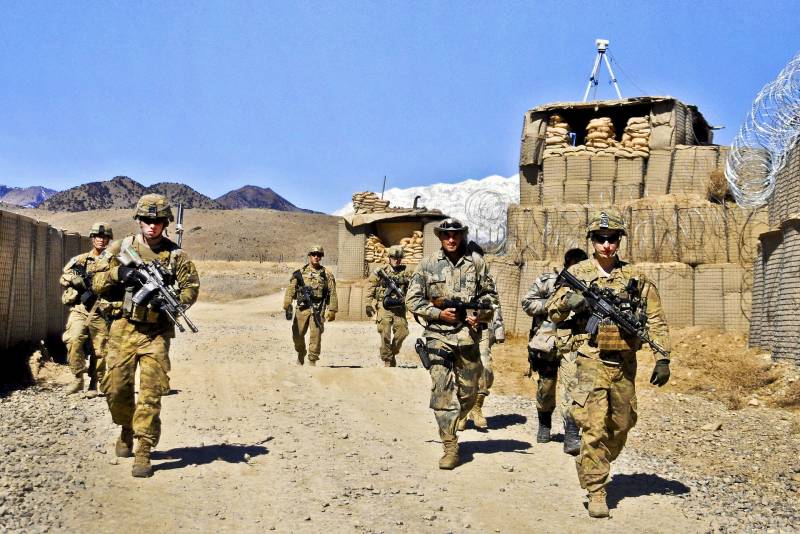 When victorious reports appeared in the media last February about the end of the long-standing war in Afghanistan, the withdrawal of American and coalition forces from this long-suffering state, and the “peace treaty” between the US and the Taliban (banned in the Russian Federation), experts received messages from great skepticism.


It is clear that the 19-year war in Afghanistan brought the Americans nothing. The troops sat at strong points, refusing to go on patrol. Up to 90% of the country's territory was controlled by various armed groups, mainly the Taliban. The puppet government in Kabul did not control the country.

The US President held a press conference in the White House in his inherent style of a la "we always win":

“We did not have such a moment, the negotiations were very successful. Everyone is tired of the war ... if bad things happen, we will return - so quickly and with such a strength that no one has ever seen. I hope this will not be necessary. Listen, no one should criticize this deal after nineteen years (of war). ”
No less pathetic was the US Secretary of State Mike Pompeo, who was present along with 30 officials from various countries and NATO Secretary General Stoltenberg at the signing of the agreement:

“There is a temptation to declare victory, but the victory of the Afghans will be achieved only when they can live in peace and prosper. The victory for the United States will come at a time when the Americans and our allies will no longer have to fear the terrorist threat from Afghanistan. ”

What specifically agreed at the Doha talks

After the words about the greatness of the Americans, about the victory of American diplomacy and the desire to make the lives of Afghans peaceful and joyful, it is worth recalling the agreement itself. Recall simply because over time for many it has for some reason transformed into a completely new one. What they are talking about today is little in line with what the US Special Representative for Afghanistan Zalmay Khalilzad and Taliban deputy leader Abdullah Gani Baradar signed.

By the way, both signatories are Pashtuns. The American diplomat is from the Pashtun family from Mazar-e-Sharif, and Mullah Abdul Gani Baradar, known to some of our readers as a veteran of the war in Afghanistan, as Mullah Baradar Akhund, is from the Pashtun family from Uruzgan province. Both are Sunnis. So the choice of negotiators is thought out.

So, the United States will reduce the number of its troops in Afghanistan from 135 thousand to 12 8 within 600 days. In addition, the troops of other countries located on the territory of the country will also be reduced in the same proportion (the total number of NATO forces at that time was 16).

In turn, the Taliban

“Will not allow any of its members, other individuals or groups, including Al Qaeda [banned in the Russian Federation], to use the territory of Afghanistan to threaten the security of the United States and its allies.”
Next comes a bright future. NATO troops and allies within 14 months leave Afghanistan without clashes and, accordingly, without losses. Beautiful plan. If you do not delve into the essence. I have repeatedly quoted Comrade Sukhov’s phrase: “The East is a delicate matter.” Agreements for the long term are good, but the tit in the hands there is more relevant than the crane in the sky.

The Government of Afghanistan releases 5000 Taliban (!) From prison as a gesture of goodwill. In response, the Taliban release 1000 of their captives from the Zindans. The remaining prisoners will be released as NATO troops withdraw.

And where is the "subtlety of the East"? I think those who know this very East already know the answer to my question. Look what the Taliban and the Americans get as a result of the deal. The Taliban receive specific deadlines for the withdrawal of foreign troops from Afghanistan, their supporters in a clearly winning option of 5 to 1, the opportunity to strengthen their positions without the intervention of the US military.

And what did the USA and the coalition as a whole get? Another declaration of intent, which was a lot under both President Obama and President Trump. Arrangements that are completely calmly suspended or canceled soon after reaching. So the question of who beat whom in this round will be left open.

The game continues. Washington is trying to implement the Iranian scenario in Afghanistan


Understanding that the diplomats lost their round, Washington came pretty quickly. And the tactics of US actions in the international arena have long been known. Having seized the prey once, this predator will follow the wounded beast until the moment when the forces leave the prey. And then the victim turns into food. Moreover, the “predator” has a lot of “voluntary helpers”.

To defeat the Taliban did not work. To cheat too. Already after the signing of the agreement, it turned out that the American diplomats agreed not so much with the Taliban as with Al-Qaida. Since the Taliban discussed all the US proposals with the leadership of this particular organization. Moreover, evidence has emerged from the Taliban headquarters that these movements link “historical ties ”, which means that they will“ respect ”each other in the future. Al-Qaeda, in turn, praised the Doha talks as a “victory for the common cause."

The first signal that the Americans are moving towards a plan identical to the plans that they implemented in several Islamic states was the statement by CENTCOM (US Army Central Command) commander Kenneth Mackenzie on June 10 in Washington. According to him, it turns out that the 19-year war was not waged in Afghanistan with the Taliban. The USA and the Taliban are friends; they have no complaints against each other.

The US Army in Afghanistan fought with the IG (banned in the Russian Federation) and Al-Qaeda. Like this. And further, the general generally revealed all the cards with his answer to a simple question about the relationship between the Taliban, IG and al-Qaeda. So, the Taliban for the United States are definitely friends and allies! “IG” (ex. In the Russian Federation) are enemies for both the United States and the Taliban. But Al Qaeda is “not a friend and not an enemy” for the Taliban.

US presses on the government of Afghanistan. Americans need negotiations to continue. That’s why there was talk of ending the financing of Kabul in case of refusal to negotiate with the Taliban. Therefore, the Americans "do not see" the constant attacks of the Taliban on government troops throughout the country. And by the way, such attacks are recorded daily in decent quantities. In May, for example, 30 attacks per day.

What is the result? First, the Americans are well aware that the government of Afghanistan will not last even a week after the coalition forces leave. Secondly, the Taliban did not and will not give up the idea of ​​seizing power. Thirdly, “IG” and “Al-Qaeda” will not leave the territory of Afghanistan, since at the moment they consider the USA as the main enemy.

And fourthly, the Americans can’t leave the territory of Afghanistan in any way, since this is not just a transshipment point, not just a huge plantation of drugs - this is, most importantly, an excellent springboard for fighting the main opponents: China and Russia.

And the plan itself is simple. Create in Afghanistan several strong groups that need to be pitted against each other. The government and the Taliban are already at war. It remains to be done so that IG and Al Qaeda join in the independent struggle. And armed clan groups, I repeat, today are really strong field commanders.

In short, the long-known principle of "divide and conquer." Unleash a civil war to bleed the enemy. It is this task that has been set for American diplomats, American intelligence, and American business.

Ctrl Enter
Noticed oshЫbku Highlight text and press. Ctrl + Enter
We are
Situational analysis of the death of the MH17 flight (Malaysian Boeing 777), made on the basis of engineering analysis from 15.08.2014Results of the week. "God forbid to see Russian revolt, senseless and merciless!"
Military Reviewin Yandex News
Military Reviewin Google News
35 comments
Information
Dear reader, to leave comments on the publication, you must to register.