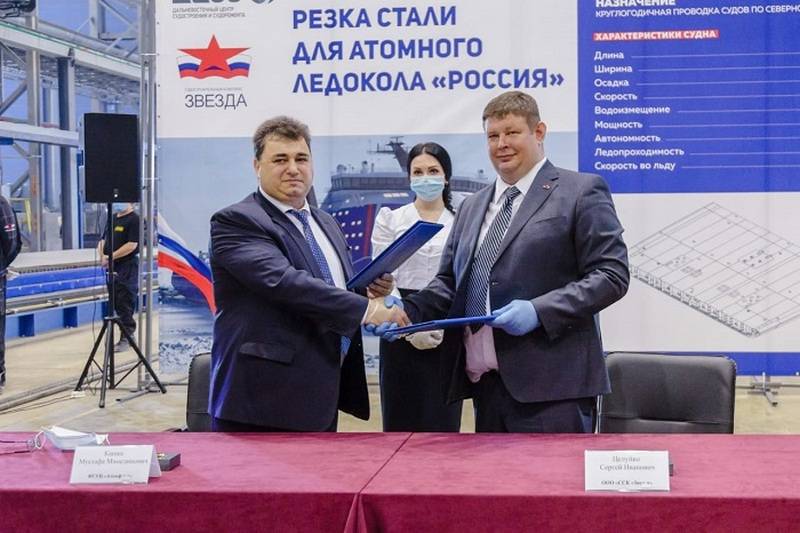 In the Big Stone of Primorsky Krai at the Zvezda shipbuilding complex, construction of the lead large linear atomic icebreaker of project 10510 (LK-120Ya, code "Leader") has begun. The steel cutting ceremony for the icebreaker was held on July 6 at the Zvezda hull production unit.


The contract for the construction of the Leader project’s lead atomic icebreaker, dubbed “Russia,” was signed between the Zvezda shipbuilding complex and the Atomflot FSUE on April 23, 2020. The state customer of the icebreaker is Rosatom State Corporation. The first icebreaker of project 10510 will go into operation in 2027. All three icebreakers of this project should be put into operation before 2033.

As previously reported, in total it is planned to build three icebreakers of the new project. In January of this year, the Russian government allocated 2020 billion rubles from the federal budget for the construction of the lead icebreaker from 2027 to 127,576979. Funds have not yet been found for the construction of two other icebreakers of the series, but there is still time, their laying is scheduled for 2023.

Ctrl Enter
Noticed oshЫbku Highlight text and press. Ctrl + Enter
We are
The government allocated funds for the construction of the leading icebreaker "Leader"Laid the keel of the first Soviet-era icebreaker with a capacity of 25 megawatts
Military Reviewin Yandex News
Military Reviewin Google News
60 comments
Information
Dear reader, to leave comments on the publication, you must sign in.