Chesme battle was the most important 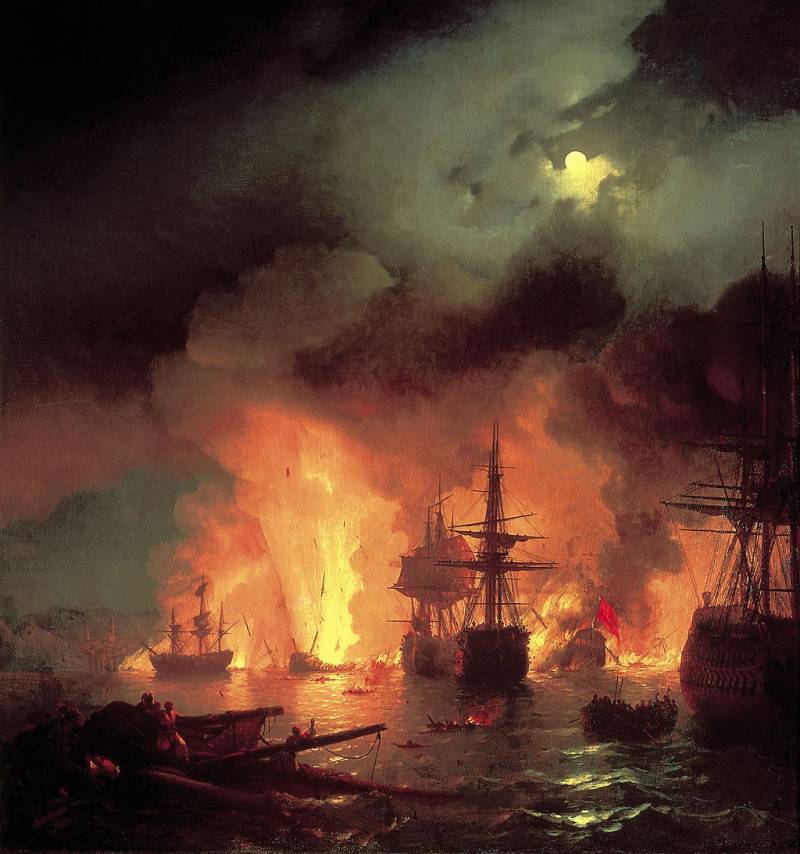 It is believed that one of the white stripes on the turn-down blue collar of the uniform of sailors and foremen of the Russian Navy symbolizes the outstanding victory of the Russian sailors fleet over Turkish in the Chesme battle. Some clever man even “nailed” this version to Wikipedia, forever misleading the current readers. In fact, this battle has nothing to do with the number of stripes on the sailor’s guis. If only because the outstanding victories at sea among Russian sailors were much greater. But the fact that the naval battle in the Chesme Bay on July 7, 1770 became the largest in the era of the sailing fleet and predetermined the defeat of the Ottoman Empire in the Russian-Turkish war of 1768-1774, is beyond doubt.

Russians always appeared where they were not expected

XVIII century entered history as a period of constant clashes between the Russian and Ottoman empires. The interests of the two states intersected not only in the border region, but also in the Balkans, in the Transcaucasus, in the Crimea and even in Poland. One of the episodes of these clashes was the support of the national liberation movement in Greece in order to destabilize the situation within the Ottoman Empire. By decision of Catherine II, the Morea expedition was sent to the area of ​​upcoming military operations from the Baltic Sea to the Aegean, the general leadership of which was carried out by Count Alexei Orlov. The main shock force of the expedition was the squadron under the command of Admiral Grigory Spiridov.

Some sources mistakenly indicate the name of the admiral as follows: Sviridov. And they indicate that his grandchildren and great-grandchildren served in the fleet until our times, when Rear Admiral Viktor Sviridov headed the 30th division of surface ships of the Black Sea Fleet. This was denied by Viktor Petrovich himself, the son of simple parents, in our conversation with him. And he explained that in the footsteps of Admiral Grigory Spiridov, only his son, Alexei Grigoryevich, who also rose to the rank of admiral, went.

By the wildest coincidence (some ships suffered serious damage when crossing the sea, others suffered a contagious epidemic among the crews, and the two-masted sailboat “Lapomnik” hit the reefs and sank), by the end of autumn 1769 only one could approach Gibraltar from the whole Russian squadron 66-gun battleship "St. Eustathius Placida. " The command of the Russian fleet had to hurry to understaff the squadron with other ships. And by March next year, Spiridov's squadron consisted of seven pennants. It still remains unclear why the Turkish fleet did not take the opportunity to destroy the Russian ships one by one. Most likely, it just didn’t occur to them that the Russians might appear from the direction from which they were not expected.

Not by number, but by reduction. And by the power of the spirit

The first operations of our ships were exclusively landing. The main target of the paratroopers was the Greek rebels on the Peloponnese. While the Russian sailors thus “pumped up muscles”, reinforcements arrived to help our squadron. And by the beginning of summer, when the main battle at sea was brewing, the Russian squadron consisted of nine battleships, one bombardier ship, three frigates, and several small ships that played auxiliary roles. The total number of crews was about 6,5 thousand people.

The Turkish fleet was more impressive both in the total number of pennants (almost three times) and in the number of personnel. The only, but very significant advantage of the Russian crews was that the Turkish military commanders had almost no naval training, since they did not go further than the coastal waters of the Aegean. And the very first clash in the Gulf of Chios on July 5th demonstrated this. Even despite the unsuccessful start of the battle for our sailors.

The lead ships could not synchronize the approach maneuver; as a result, the battle order was disrupted. Despite this, Admiral Spiridov, located on "St. Efstafii ”, went a direct course to the 80-gun Turkish flagship“ Real Mustafa ”. The crew of our flagship behaved very worthy. Fighting the fire that arose from direct hits from Mustafa, Efstafy continued to move until he came close to the enemy ship. In a fierce boarding battle, Russian sailors set fire to and captured the Turkish flagship. The burning mast fell from him to Efstathius, causing a severe explosion. This destroyed both ships.

But here, our sailors, including from neighboring ships that organized the struggle to save those who were overboard, did not panic. Among those saved from the water were both Count Orlov and Admiral Spiridov. The Turks behaved completely differently, who were literally demoralized by what happened. As a result, of the 775 crew of the Real Mustafa crew, only 63 escaped. The Turkish naval commanders made an urgent decision to retreat with all their ships to Chesme Bay. Firstly, in order to recover and gain time, and secondly (mainly), counting on the fact that the Russians simply do not tuck into the bay, knowing about the powerful Turkish coastal artillery.

There was a fleet and no fleet

But our sailors could not be stopped. On the evening of July 6, the Baltic squadron with onboard guns from the battleships "Europe" and "Rostislav" began to shell Turkish ships that entered the bay. The shooting was more psychological in nature and at the same time was supposed to distract the Turks from the beginning of the movement of firewalls (a kamikaze ship used to set fire or undermine an enemy ship), which had been converted from small auxiliary vessels the day before. Of the four firewalls, only one reached the location of the Turkish fleet and set fire to the battleship. The explosion of the powder cellar on the ship caused truly gigantic destruction. Burning debris flew into other ships, spreading fire, and the sailing wooden ships of the Turks flashed one after another, like matches.

Further battle was pointless, and the Russian sailors, having ceased firing, began to rescue the surviving sailors - their yesterday’s enemies. By 8 a.m. on July 7, everything was over. The Ottoman Empire in just one night lost most of its fleet. Killed 15 battleships and 6 frigates; one ship and five galleys were captured.

Victory in the battle of Chesme became a real triumph of our fleet. She not only demonstrated to everyone how Russian sailors can fight, but also served as a weighty argument at the conclusion of the Kuchuk-Kainardzhi peace, which ended the Russo-Turkish war.

By the way, according to the Kuchuk-Kainardzhi peace treaty of 1774, the Crimean Khanate, which since 1580 has officially been a vassal of the Ottoman Empire, was recognized as independent from Turkey. And nine years later, with a census of Catherine II, Crimea, Taman and Kuban were annexed to Russia.

In memory of the victory near the fortress city of Chesma, a medal was minted, which depicted one of the scenes of the death of the Turkish fleet. In addition to the place and date of the battle, the medal had only one word: “Byl”. Which meant: "There was a Turkish fleet, but not now."

Ctrl Enter
Noticed oshЫbku Highlight text and press. Ctrl + Enter
We are
A great interview with Sergey Lavrov: about Ukraine, Obama and IranWhat you didn't want to know about England
10 comments
Information
Dear reader, to leave comments on the publication, you must to register.