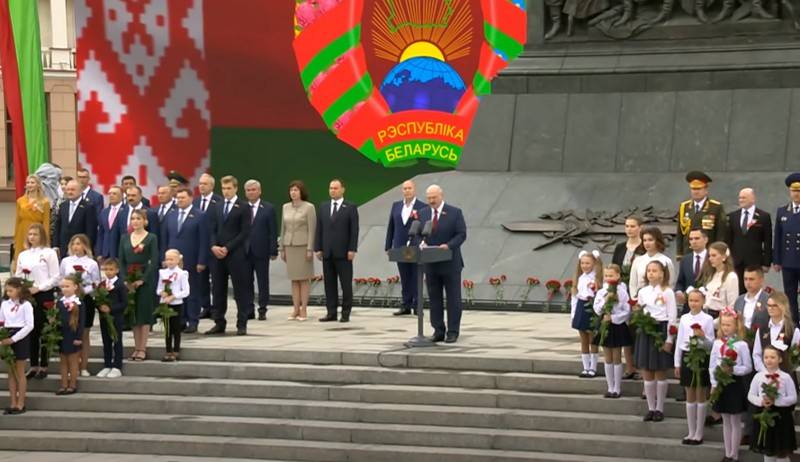 Belarus today celebrates Independence Day. Congratulations to the leader of the country Alexander Lukashenko and the Belarusian people come from all over the globe. This was reported by the press service of the president.


According to published information, first of all, congratulations came from Russian President Vladimir Putin. The Russian leader noted that relations between Russia and Belarus continue to develop in a positive way, the countries are implementing many joint projects in the fields of foreign policy and defense, in trade, economic, humanitarian, scientific and technical and other fields. In addition, Prime Minister Mikhail Mishustin and Chairman of the Federation Council Valentina Matvienko sent their congratulations to Lukashenko.

I am sure that together we will be able to further build up Russian-Belarusian relations in all areas, as well as constructive interaction within the Union State, the Eurasian Economic Union, the CSTO and the CIS. This undoubtedly meets the fundamental interests of the fraternal peoples of our countries.
- cites the press service of the Belarusian president the text of the message received from Moscow.

China also sent a congratulatory message to Minsk, which has recently developed trade and economic relations with Belarus. In his message, President Xi Jinping noted that the Republic of Belarus has recently achieved certain successes and Beijing will continue to support the path chosen by Minsk and provide comprehensive assistance.

In his message, US President Donald Trump noted that he remains "a strong supporter of the independence and sovereignty of Belarus" and hopes for continued cooperation "for the benefit of the two countries."

The head of the US State Department, Mike Pompeo, also congratulated Lukashenko on the holiday:

The United States strongly supports the continued commitment of the Belarusian people to democratic principles, including universal freedoms, civil liberties, and the rule of law. We urge the Government of Belarus to do everything possible to ensure that the upcoming elections are free and fair. (...)
- the State Department said in a statement.

But the Queen of Great Britain in her congratulatory message called the President of Belarus "Your Excellency."

With great pleasure I am sending you, Your Excellency, my warmest congratulations on the occasion of the national holiday of the Republic of Belarus and my best wishes to the Belarusian people at this difficult time for everyone
- said in a statement.

President of Ukraine Vladimir Zelensky also sent his congratulations to Lukashenko, who expressed hope that Minsk would become “a reliable partner and neighbor” for Kiev.

In the modern world, for our states, whose peoples have always historically been linked by close socio-cultural and economic ties, the support and strengthening of good-neighborly and partnership relations are especially important. I look forward to continuing our fruitful dialogue, as well as strengthening practical cooperation at the interregional level in the interests of the peoples of our countries
- wrote Zelensky.

Congratulations keep coming.
Ctrl Enter
Noticed a mistake Highlight text and press. Ctrl + Enter
We are
Interview of Vladimir Putin with Radio Europe-1 and TF1Report on the results of the survey-2013 "Evaluation of state political figures"
54 comments
Information
Dear reader, to leave comments on the publication, you must to register.