General employment in the USSR: good or forced? 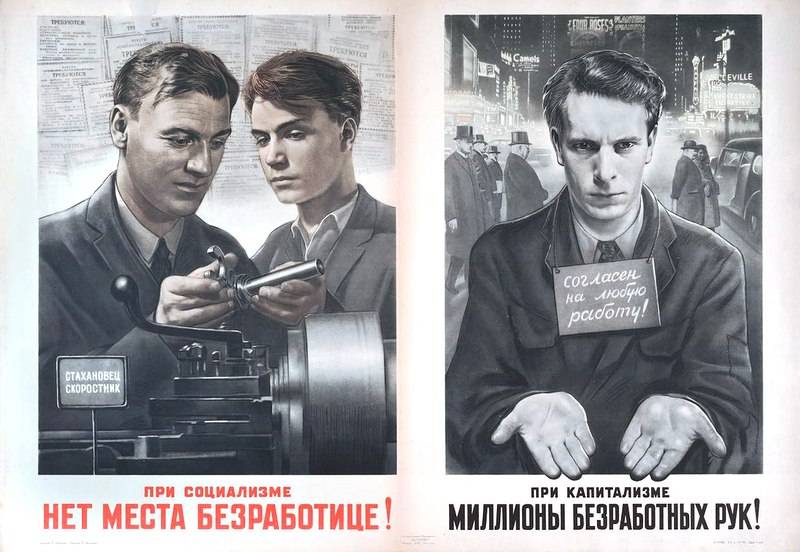 One of the main differences between the Soviet Union and the countries of the "capitalist camp" in the social sphere was the complete absence in it of such a category of citizens as unemployed. The USSR was truly a state of working people - not in words but in deeds. There were truth (from a certain time) in it, and the so-called parasites, but they fought decisively and irreconcilably. Was the work really for everyone and everyone? And was it so good for the Soviet people?


Unemployment went to the young Land of Soviets not only as one of the parts of the inheritance from the very “old world” that its creators vowed to destroy “to the ground”. This social evil was an inevitable consequence of the collapse of the previously existing state apparatus and economic structure, the civil war and the devastation caused by it. The decree "On labor exchanges" was signed by the head of the Council of People's Commissars of the RSFSR Vladimir Lenin at the very beginning of 1918. In accordance with this decision, state offices were created everywhere, in which citizens could register for free as unemployed, receive the appropriate allowance (making up one sixth of the average wage) and, at least in theory, count on assistance in finding employment.

In fairness, it is worth noting that in the Russian Empire, similar institutions existed only in the largest industrial centers, and even then not in all. In other cases, it was necessary to pay, and not a little, for assistance in obtaining work for “private owners” that provided appropriate services. One way or another, but in its original form, Ilyich’s initiative lasted until 1924. Paradoxically, the country faced the most massive decline in industrial production in 1921-1923. In addition, soldiers and commanders who were massively demobilized from the Red Army, pulled home from the fronts of the Civil. Peasants from half-ruined villages also aspired to the cities, out of habit, hoping to find some kind of work and food there.

By the mid-20s, the army of the unemployed in the USSR had grown (according to various estimates) to 10-15% of the total working-age population, having come close, according to some historians, to the number of 10 million people. The situation (especially considering that a significant part of this hungry and desperate crowd was yesterday's front-line soldiers) was explosive. The state was simply not able to feed and provide even the most unskilled work with such a breakthrough of the people. In the summer of 1924, unemployment benefits were canceled, and applicants who had no seniority and demanded specialties began to be removed en masse (tens and hundreds of thousands) from stock exchanges. This, of course, did not contribute to the reduction of social tension: in some places, things began to reach the pogroms of exchanges and the beatings of their employees.

How all this could end is understandable. The surviving reports compiled on this occasion by the staff of the NKVD State Unitary Enterprise state openly stated that potential "combustible material" in the face of a multitude of unemployed were trying with might and main to use "anti-Soviet elements", primarily anarchists who were not left in some places. Everything could turn out very badly, but then Comrade Stalin got down to business. As always, when he began to solve certain global problems, everything worked out as if by magic. March 13, 1930, having issued a job placement for the last official Soviet unemployed, a certain locksmith Mikhail Shkunov, the last in the USSR, the Moscow labor exchange, was solemnly closed. The problem has ceased to exist as such.

Today, some are trying to argue that all this, of course, was “window dressing” and the USSR won the victory over unemployment exclusively “on paper”. It doesn’t converge, gentlemen ... In the 30s, unemployed people from the United States rushed to the Soviet Union in droves. A lot of memories of foreigners about this time have survived, including those far from complementary to Stalin, where they all admit with amazement: "The Bolsheviks have no unemployment!" Fraud did not pass with Joseph Vissarionovich. In order to really provide everyone and everyone with work, drastic measures have been taken: from mass retraining of people to professions that are in demand in the national economy, to the introduction of a 7-hour working day at the enterprises and the third shift, which allowed the enterprises to be launched around the clock.

The country was rapidly developing, building, moving to new heights, in the end, preparing for war. Working hands and creative minds were, as they say, snapped up, and everyone could find a job for themselves and on the shoulder. People who either themselves lived in a divided estate society, or were the first or second generation of descendants of immigrants from it, the soaring Stalinist “social elevators” seemed like a real gift of fate. In the 12th article of the famous Stalinist Constitution of 1936, labor was declared the duty of every citizen of the USSR. However, in article 118 of the same Constitution, the state gave a XNUMX% guarantee of employment to all its citizens without exception. Everything was fair.

It is not surprising that the famous decree “On the fight against parasites,” which some mournful gentlemen bring down to the heap of “Stalinist repression,” was adopted in 1961, under Khrushchev. By the way, in places where, as they say, Makar did not drive calves, according to him, over the next three years, 37 thousand people were exiled! Nikita Sergeich ... The light of democracy and mercy, yeah. Then, by the way, in the Criminal Code appeared the corresponding 209th article, according to which “for a parasitic way of life” you could get both six months or a year of correctional labor, and a very real “term” of two years. It was in fear of her that some domestic rock stars were later arranged by stokers and janitors.

The decay of the Soviet system, for which Khrushchev must be “thanked” for all, gave rise to those who categorically did not want to work or live in a Soviet way. Today, almost three decades after the concepts of “parasites” and universal compulsory and secured employment disappeared into oblivion in 1991, one can argue for a long time about what was more of them: a totalitarian evil or a public good. However, one indisputable truth remains: from the 30s until the very death of the USSR, the threat of losing one's job and losing one's livelihood really did not stand before any Soviet person.

Ctrl Enter
Noticed oshЫbku Highlight text and press. Ctrl + Enter
We are
About Stalin and KhrushchevWhat you didn't want to know about England
Military Reviewin Yandex News
Military Reviewin Google News
241 comment
Information
Dear reader, to leave comments on the publication, you must sign in.