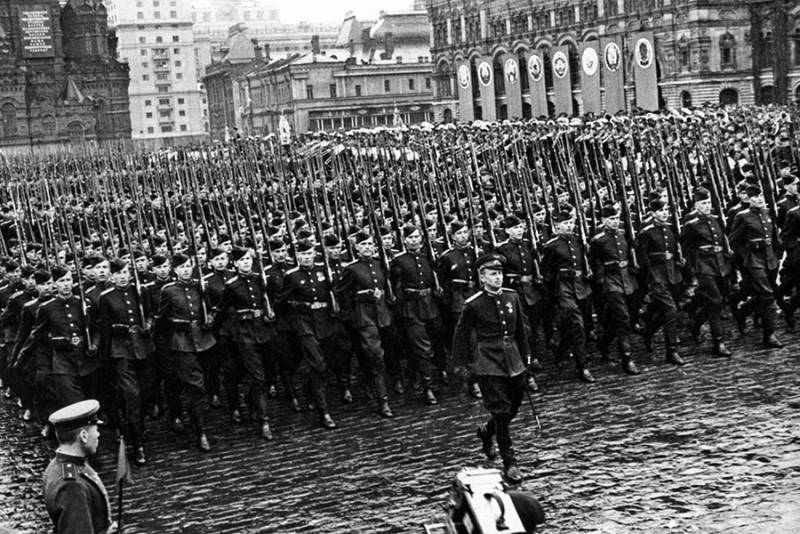 May 9 at 01:01 Moscow time, the surrender of Nazi Germany and all its armed forces came into force. Just a week later, on May 15, after cannon fire went silent in Europe, JV Stalin decided to hold a parade of winners in Moscow on Red Square. The parade was to mark a victory over Nazi Germany, this would be the triumph of the victorious people. The parade, which eventually took place on June 24, 1945, entered forever in history our country, putting a symbolic point in the war, which lasted a long 1418 days.


The proposals formulated by representatives of the General Staff for holding the Victory Parade were presented to Stalin on May 24, 1945. The Supreme Commander-in-Chief accepted all the arguments and suggestions, but did not agree with the date of the parade. The General Staff expected that the preparations for the parade would last two months, but Stalin insisted that the Victory Parade be held within a month.

Fighters of 10 fronts took part in the Victory Parade

The Victory Parade, which was held in the Soviet capital on June 24, 1945, was attended by combined regiments from 10 fronts, as well as a combined regiment from the naval fleet. In addition, listeners of military academies, cadets of military schools (Suvorov) and troops of the Moscow garrison were involved in the parade. Various military equipment was presented quite massively at the parade, and an air parade was also to be held. However, 216 aircraft remained at the airfields, as it was cloudy in Moscow on June 24, and it was raining during the parade. 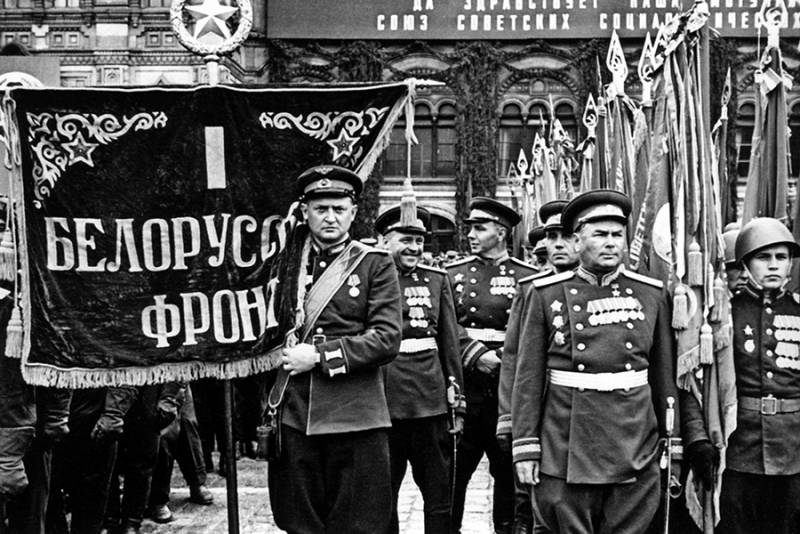 Each of the 10 fronts: Karelian, Leningrad, 1st Baltic, 1st, 2nd, 3rd Belorussian and 1st, 2nd, 3rd, 4th Ukrainian, put up a combined regiment of the five-battalion parade composition. The formation of these regiments was completed at the end of May 1945, they began to arrive in the capital, starting from June 10. In the initial directive adopted by the General Staff of the Red Army, the number of combined regiment was estimated at 1059 people with 10 spare, but already during the collection of combined regiments the number was increased to 1465, while maintaining the same number of spare.

They were looking for the most worthy candidates to staff the combined regiments. The personnel of the parade participants were formed very carefully. Preference was given to military personnel who showed themselves excellently in battles, demonstrating courage, courage, personal heroism and military skill. Great importance was given to the growth of fighters. For example, the order on the 1st Belorussian Front of May 24, 1945 specifically stipulated that the growth of candidates for participation in the Victory Parade should not be lower than 176 cm, and the age of the participants should not be older than 30 years.

A big problem for organizing the parade was to provide all participants with a parade uniform. For example, if cadets of military schools, military personnel of the Moscow garrison and students of military academies, already had ceremonial uniforms and regularly engaged in drill training, then for the 15 thousand soldiers who were recalled to Moscow, everything was different. All these people needed to be accommodated, accommodated, provided with meals, organized rehearsals and issued uniforms in size. It was the task of sewing a huge amount of ceremonial uniforms that seemed to be the most difficult. 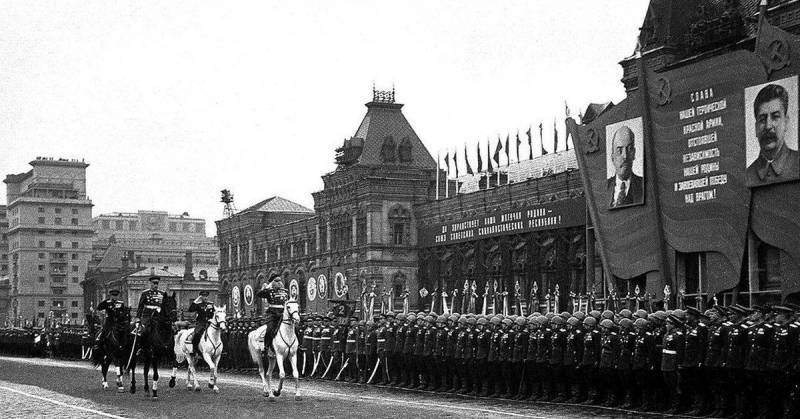 Fortunately, the situation was resolved positively, despite the tight deadlines. Sewing factories operating in Moscow and on the territory of the Moscow Region started sewing their dress uniforms at the end of May and managed to cope with the task. The Moscow factory Bolshevichka played a large role in tailoring the dress uniform. By June 20, 1945, all the participants in the Victory Parade managed to get a new uniform. In total, more than 15 thousand sets of molds were made. It was at the Victory Parade that the first new uniforms of the color of sea wave were presented for the first time. In the future, this color will become traditional for the dress uniform of Soviet officers.

Throwing German banners to the mausoleum

The culmination and most symbolic part of the Victory Parade, which is familiar to many from the photo and newsreels, was the throwing of the banners of defeated Nazi Germany to the mausoleum on Red Square. Who exactly proposed to include this element in the parade is not known for certain. According to one version, this idea was proposed to Stalin by Russian and Soviet historian, academician Yevgeny Viktorovich Tarle, who noted that Roman soldiers did this at one time.

Before the parade, at the direction of the General Staff, from the units of the 1st Belorussian and 1st Ukrainian fronts (from Berlin and Dresden, respectively), they managed to deliver about 900 captured banners and standards that were captured in Germany. All delivered banners were originally placed in the building of the Lefortovo barracks. Subsequently, from the delivered banners and standards, the members of the special commission selected 200 units, which they placed in a special room under the protection of the Moscow commandant’s office. Immediately on June 24, 1945, the selected banners and standards of the defeated Third Reich were delivered to Red Square and handed over to the personnel of a specially selected ceremonial company of “porters”, consisting of 200 people (10 lines of 20 people each). 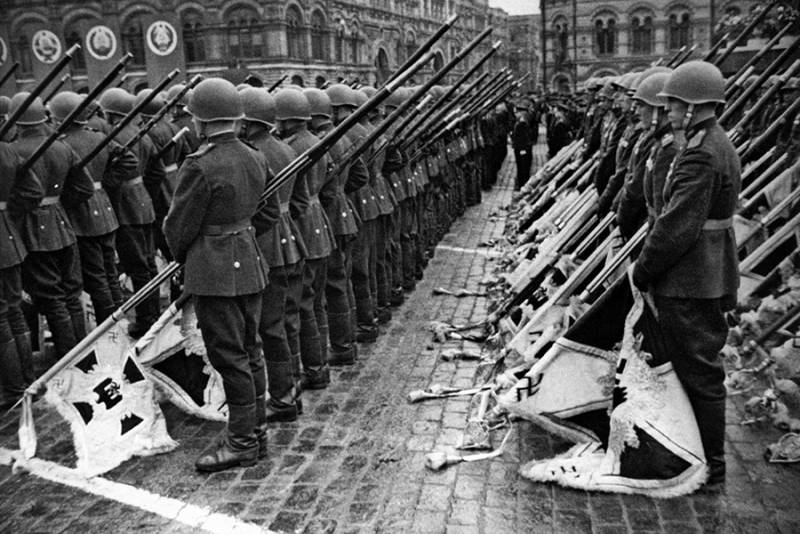 After the passage of the combined regiments of 10 fronts and the combined regiment of the Navy, a gigantic orchestra of 1400 people, which accompanied practically without pauses the entire movement of the troops, suddenly stopped playing. In the silence established on the square, the battle of 80 reels was heard. A special company appeared under this drum battle, which carried 200 enemy banners, the cloths of which dragged along a bridge wet from the rain. On a par with the site at the mausoleum, the company fighters made a turn to the right and with force threw the banners of the defeated enemy to the ground.

Not without curiosities. Now we can say that among the banners thrown to the mausoleum were about two dozen Kaiser, mainly cavalry. In the first line there were three Prussian military standards dating back to the 900th century. It is believed that these banners and standards could be selected by oversight, but most likely, a special commission selected them from XNUMX banners and standards delivered to Moscow because of their good preservation, beauty and impressive appearance. Historians have no other explanation for this fact.

About 35 thousand people participated in the Victory Parade

The Victory Parade turned out to be a large-scale and grandiose event in every sense of the word. The total duration of the parade was two hours and two minutes. The parade was held in heavy rain, which thousands of Muscovites gathered on Red Square simply did not notice. True, the weather has made adjustments to the approved program. Due to rain, the air part of the parade and the demonstration of the working people of Moscow were canceled. But even without this, the military parade on June 24, 1945 entered the history of our country forever, personifying the triumph of our armed forces, the victorious people and generals.

The Victory Parade in Moscow was attended by 24 marshals of the Soviet Union, 249 generals, 2536 officers and 31 sergeants and privates. Separately, to participate in the parade, a combined military orchestra was allocated, numbering about 116 musicians, the youngest of whom was 1400 years old. The two main persons of the parade were Victory Marshals: K.K. Rokossovsky, who commanded the parade, and G.K. Zhukov, who hosted the Victory Parade. The horses for the marshals were prepared in advance. For Zhukov, a horse named Idol of white, light gray suit of Terek breed was picked up, for Rokossovsky - a black, karak (black-brown) suit named Pole. 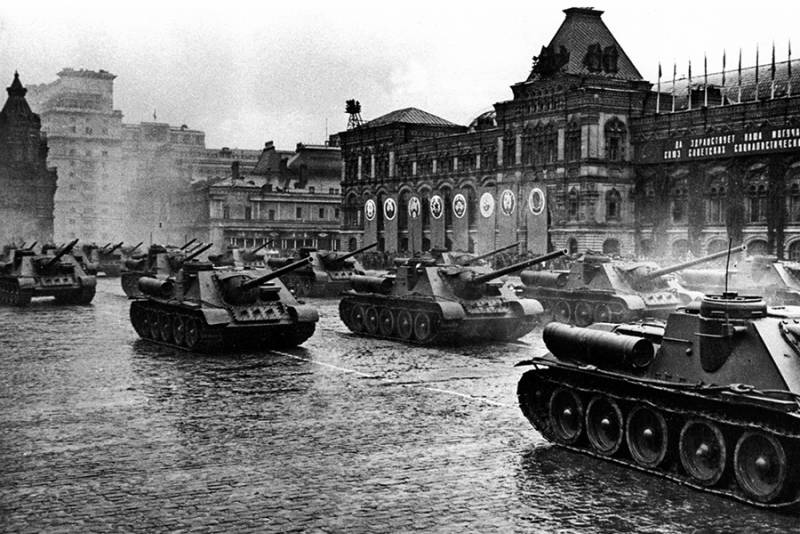 In addition to the infantry, cavalry took part in the parade, and military equipment was also widely represented. In just 50 minutes, 1850 units of various military equipment proceeded along Red Square. The display of military equipment was opened by artillery. At the same time, artillery systems of various calibres were presented, including ZiS-3, BS-3, M-30 howitzers, M-31 Andryusha rocket launchers, as well as large-caliber artillery, up to 305 mm . Also in the parade was attended by armored vehicles: medium Tanks T-34-85 and heavy IS tanks, self-propelled guns SU-76, SU-100 and ISU-152, as well as motorcyclists and paratroopers on various wheeled vehicles. Representatives of the American automobile industry passed along Red Square: Dodge and Studebaker trucks, as well as Willis jeeps.

After the passage of military equipment, a combined orchestra entered the square, which completed the Victory Parade on June 24, 1945 at about noon. The unique musical group, which played throughout the parade, was assembled from 38 orchestras of military schools in Moscow, as well as military units of the Red Army and the NKVD. The Consolidated Orchestra concluded the Victory Parade with the march of the military conductor and composer Semyon Aleksandrovich Chernetsky “Glory to the Motherland”.

Ctrl Enter
Noticed oshЫbku Highlight text and press. Ctrl + Enter
We are
Everything for the front! All for victory!What is fascism for a victorious nation?
Military Reviewin Yandex News
Military Reviewin Google News
33 comments
Information
Dear reader, to leave comments on the publication, you must sign in.