Support ships in the Tsushima battle: a mistake or a necessity? 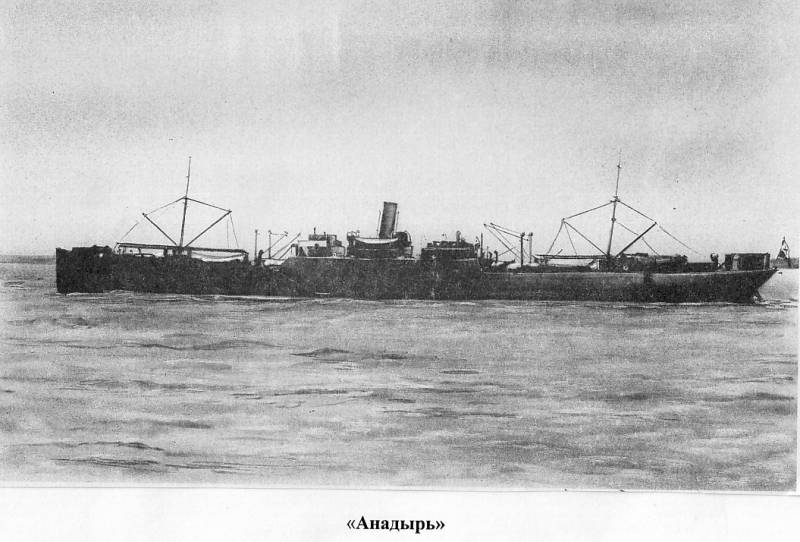 On May 12, Vice Admiral Z. P. Rozhestvensky released the Meteor, Yaroslavl, Vladimir, Voronezh, Livonia and Kuroniya transports under the leadership of Captain 1st Rank O. L. Radlov to Shanghai. These ships had to wait in the wings to supply coal to either the entire 2nd Pacific Squadron retreating from the Strait of Korea, or its individual ships at the entrance of cruising operations against Japan.


With the main forces, eight support ships remained, which moved to the Korea Strait and took part in the Tsushima battle. Let's consider briefly each of them.

Transport "Anadyr" had a displacement of 17350 tons. Transported 7000 tons of coal, mines, counter-mines, shells, food, spare parts, repair materials. During the Tsushima battle, Anadyr led the convoy of transports and received only minor damage, including from a collision with the tug "Rus". At night the Anadyr lagged behind the squadron, and its commander, captain of the 2nd rank V.F. Ponomarev, decided to leave through the Korean Channel. Large reserves of coal allowed not to call at the nearest ports, and the ship headed for Madagascar. For a whole month nothing was known about the fate of Anadyr, and he was considered dead in Tsushima. But on June 14, Anadyr arrived in Diego Suarez and sent a telegram to Petersburg. Further, having received instructions, he returned to Russia. 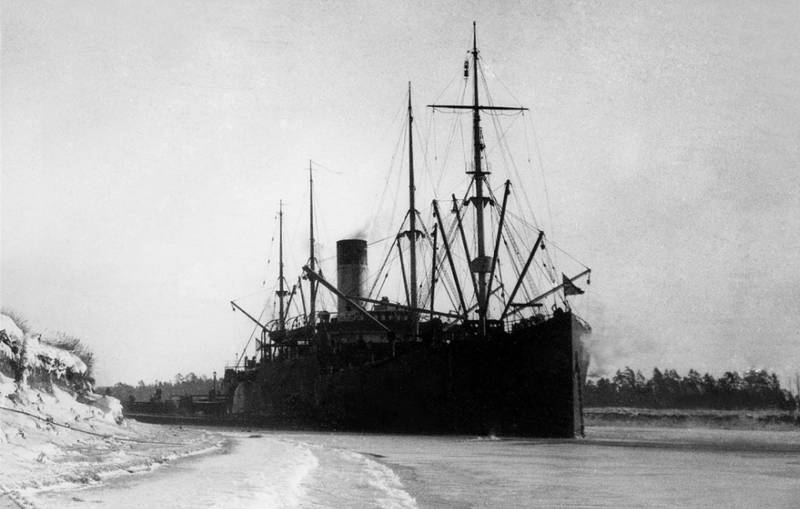 Transport "Irtysh" had a displacement of 15000 tons. Transported 8000 tons of coal, 1500 pounds of pyroxylin, shells and food. In the battle on May 14, the ship received 20 hits, including a large hole in the bow through which water began to flow. The Irtysh lagged behind the squadron, and captain 2nd rank K.L. Yegormyshev sent transport to Vladivostok along the coast of Japan. But to stop the flow of water into the holds did not work: the pumps could not cope, the patch did not hold. By the evening of May 15, the situation became critical, and the team left the sinking ship.

Transport "Korea" had a displacement of 6163 tons. Transported coal, mines and spare parts. In the battle of May 14, he received one hole in the area of ​​coal pits, which he managed to close up, and several minor damage to the superstructures. After the end of the afternoon battle, Korea followed the cruisers of Admiral O. A. Enquist, but lagged behind them. Then the ship's captain, Dr. I.O. Zubov, headed for Shanghai, where he interned along with O. L. Radlova's transports.

The towing ship "Svir" had a displacement of 611 tons. In the battle on May 14, he saved teams from the Urals and Rus, received no serious injuries, and in the evening followed the cruisers back to the Strait of Korea. But at night the tugboat lagged behind the cruisers and caught them only at dawn on May 16. Admiral O.A. Enquist ordered Svir to follow to Shanghai, where she interned along with Radlov’s transports. 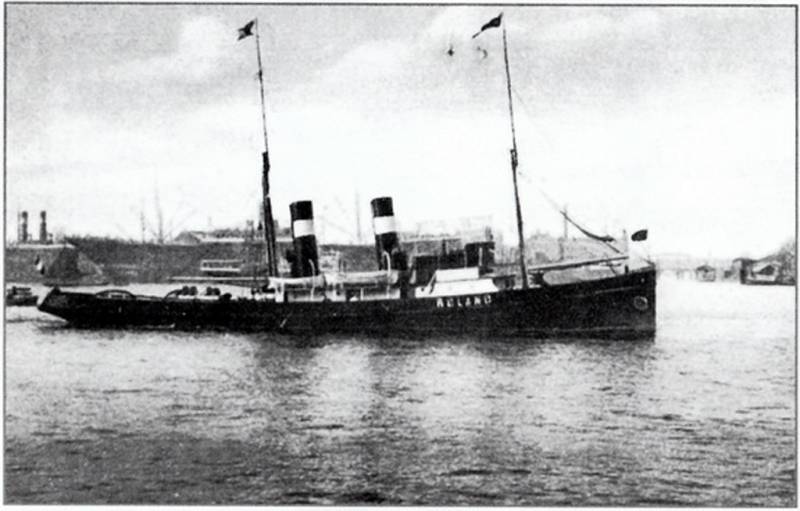 The towing ship "Rus" had a displacement of 1202 tons. In a battle on May 14, he received steering damage and, maneuvering only with machines, was rammed by Anadyr. "Rus" began to sink quickly and was abandoned by the crew. 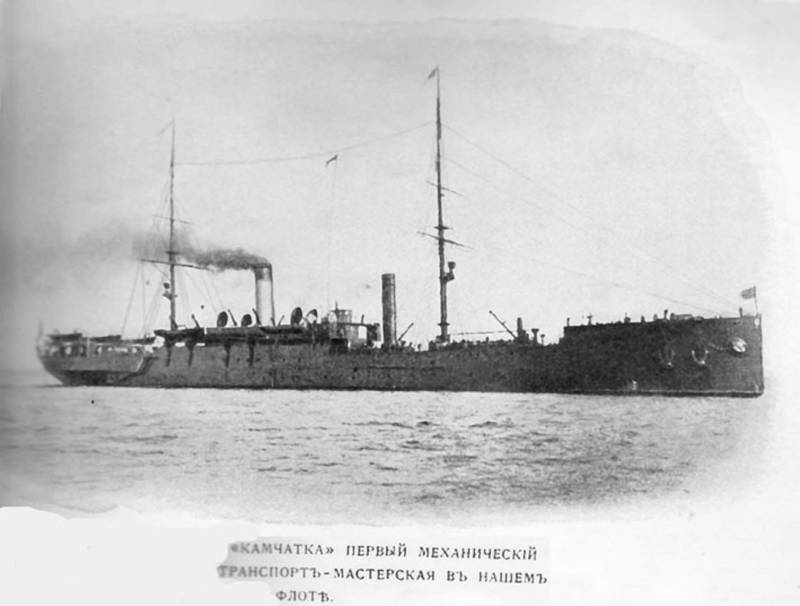 The floating workshop “Kamchatka had a displacement of 7060 tons. In the battle on May 14, she lost track of the damage she received and was finished off by Japanese ships in the evening. 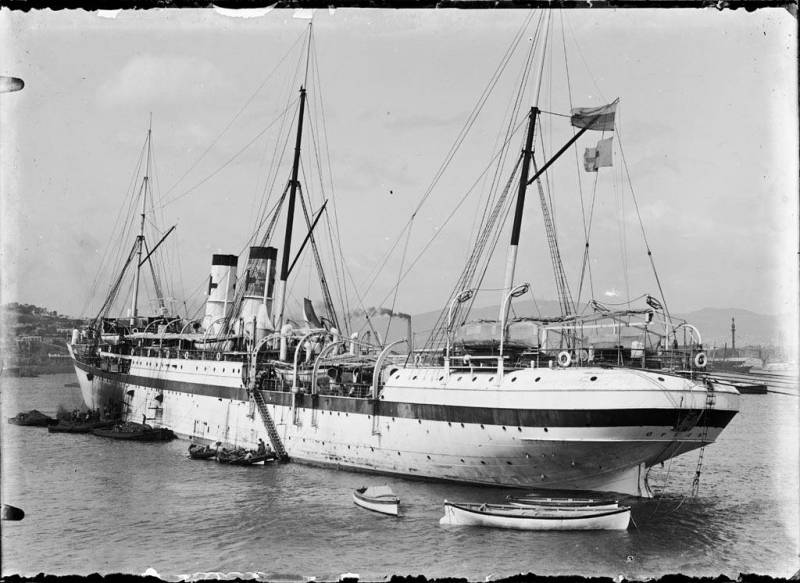 Hospital ship "Eagle" had a displacement of 8175 tons. Moving in the Korea Strait behind the squadron with identification lights under the flag of the Red Cross, the Eagle was spotted on the night of May 14 by a Japanese reconnaissance vessel fleetafter which the entire squadron was discovered. During the afternoon battle, the Eagle was detained by a Japanese auxiliary cruiser.

The hospital ship "Kostroma" had a displacement of 6800 tons. In the battle on May 14, Kostroma repeated the fate of the Eagle, that is, it was detained by the Japanese.

Out of eight supply ships to Vladivostok, not one of them could break. Three ships left through the Korea Strait, the five remaining either sank or were captured by the Japanese.

Support ships not only could not benefit the squadron, but significantly complicated its position.

Firstly, the hospital ship “Orel”, moving with lights, was spotted by the auxiliary cruiser “Sinano-Maru”, which was in the third line of patrol. Approaching the "Eagle", the Japanese scout noticed the smoke from the squadron and then the ships themselves. There is an opinion that if hospital ships went without lights or outside the main forces, the Russian squadron would pass the Tsushima Strait unnoticed. Would you find her on a foggy morning on May 14? This is a separate conversation.

Thirdly, instead of one of its main functions - reconnaissance at the squadron, the cruiser of the 2nd Pacific Squadron was involved in protecting transports. This item was noted by the commission of inquiry:

... the squadron commander’s refusal from scouts and patrol vessels had a direct consequence of the surprise attack of the enemy fleet, and this surprise, under these conditions, resulted in the complete disruption of the squadron and the death of its 2 flagships at the beginning of the battle.
Another side of the "employment" of the cruisers was the Japanese ability to freely conduct reconnaissance. In the case of active operations by the cruising detachment, Japanese sentinel ships: the armed passenger liner Sinano-Maru and the 20-year-old Elswick cruiser Izumi would not dare to go alone. And if the troops acted, they would not have to count on effective control of the Korean Strait.

Thus, there were obvious negative consequences of the movement of support ships together with the main forces across the Sea of ​​Japan. But maybe they were needed before coming to Vladivostok? Let's look at what benefits they could still bring in the campaign.

Transports Overloading coal at sea was a big problem and took a lot of time. In addition, according to the testimony of the flagship navigator Filippovsky, overloads were carried out only in certain places, favorable in terms of weather. Thus, taking into account the fact that all the ships of the 2nd Pacific Squadron preloaded more than enough coal to move to Vladivostok, there was no need for transport.

Tugboats. If warships lost their course from damage or breakdowns, they might have to be towed. But in conditions of a possible Japanese attack at any moment, it’s better to pull a warship, which will be more powerful, armored and armed. Thus, there was no need for tugboats.

Floating workshop. Even if the ship loses track, it is much easier to take it in tow than to make repairs at sea in the presence of a threat from the Japanese. Thus, there was no need for a workshop.

Finally, hospital ships are the only ships that could even theoretically help the squadron en route to Vladivostok, saving crews of sinking and taking on board the wounded from damaged ships. Why only theoretically? Because in practice, during the battle, the hospital ship was kept away from flying projectiles and could not quickly approach those in distress. And even after the battle it is very difficult to take the wounded, for the launch and reception of the boat you need to stop both ships. Keep up with the squadron? Or stop the entire squadron? And if the Japanese appear? In general, the risks are too great. And, as the experience of "Mongolia" in the Yellow Sea showed, no one even thought to transfer the wounded to a hospital ship.

As a result, we see that there were no objective reasons for leading support ships together with the main forces.

Now let's look at the presence of support ships in the squadron from the perspective of the possibility of their defense in the upcoming battle. On the Russian side, cover could be provided by 5 rank 1 cruisers (of which Vladimir Monomakh and Dmitry Donskoy were obsolete armored) and 3 rank 2 cruisers (of which the Diamond was armored and had no guns larger than 75 mm). From the Japanese side, they could attack the 3rd, 4th, 5th and 6th combat units: 14 armored cruisers, 1 obsolete armadillo and 1 obsolete armored cruiser.

If we calculate the ratio of guns with a caliber of 120 mm or more, then against twenty-nine 152 mm and thirty 120 mm Russian guns, the Japanese had (not counting the obsolete 305-320 mm guns) four 203 mm, forty-six 152 mm and ninety-four 120 -mm Thus, we can state no less than a twofold advantage of the Japanese forces in a potential attack on Russian transports. And if you take into account auxiliary ships and destroyers, the advantage of the Japanese will be even more noticeable! It turns out that Rozhestvensky did not have the forces capable of protecting support ships in the general battle. As part of the squadron, they were doomed to death.

Now we can make an unambiguous conclusion. The presence of support ships in Tsushima is a clear mistake.

The situation in which the squadron was engaged in battle in the cover of serving transports, with the main forces of the fleet sacrificed to their own supplies, is more than strange.
It summarized historical commission in the collection "Russo-Japanese War".

Then what was to be done with the support ships? There are several options for how they could be followed to Vladivostok (I have no doubt for a second of their need for Vladivostok). You can around Japan. It is possible through the Korea Strait, but the next night after the passage of the main forces, when the Japanese ships will be distracted by them. And for escorting support ships, it would be possible to single out the cruisers Dmitry Donskoy and Vladimir Monomakh.