Confrontation of the USA and China in Europe 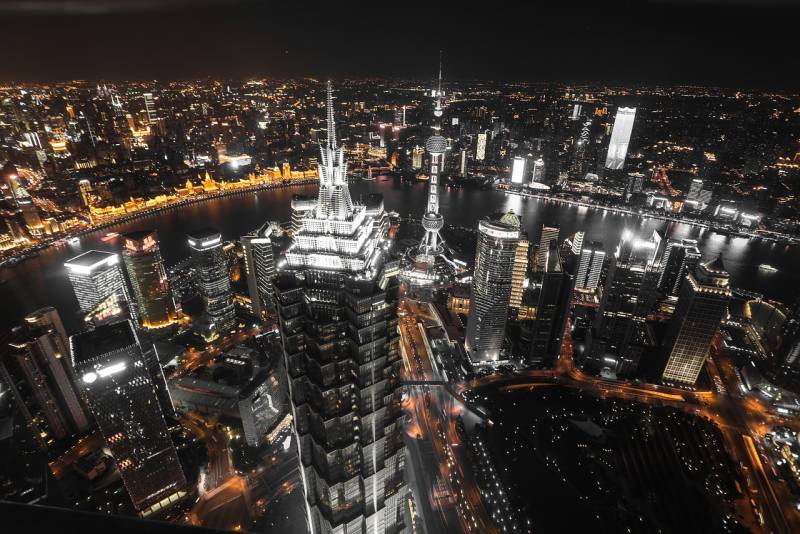 
China does not lag behind its counterparts in the "strategic triangle" of the USA - China - Russia. Starting in 2013, the implementation of the “Belt and Way”, its main political and economic initiative of our time, which is embodied in the process of creating and modernizing a diverse economic infrastructure on the land routes of the Eurasian Silk Road Economic Belt and the trans-ocean routes of the Sea Silk Road 21 century ”, as well as, of course, in active logistics on these routes, China has persistently affirmed not only in Africa and South America, where there is still room for economic activity for everyone, but also in the civilizational“ heart ”of the Western world - in Europe .

Chinese economic activity on the European continent is described, in particular, in the article by RUDN University professor A. V. Tsvyk “One Belt, One Way”: A View from Europe ”in the journal“ Modern Europe ”(2019, No. 1, pp. 104-112 ) As reported in this article, the essence of the implementation of the Chinese “Belt and Way” initiative in Europe lies mainly in the cooperation of the Chinese with the EU member states on the implementation of projects for the development of land (primarily railway) and port infrastructure of the Old World. In 2015, an increase in the interest of Europeans in participating in the Chinese Belt and Way initiative was facilitated by the entry of a number of EU countries into the cofounders of the Asian Infrastructure Investment Bank (AIIB), which is one of the financial instruments for implementing Belt and Way. Thus, Germany became the fourth largest investor after China, India and Russia, the shareholder of this bank.

Another platform for China’s participation in the economic life of Europe is the “16 + 1 format”, in which China primarily carries out trade, economic and investment cooperation, as well as cooperation in the field of culture, tourism, science and education with 16 countries of Central and Eastern Europe: Albania, Bosnia and Herzegovina, Bulgaria, Croatia, Czech Republic, Estonia, Hungary, Latvia, Lithuania, Northern Macedonia, Montenegro, Poland, Romania, Serbia, Slovakia and Slovenia. Russia, as a “strategic partner” of China, never openly protests and does not resent, even if China’s activity in Europe in one way or another interferes with its own interests in the European direction. But the United States, which is firmly upholding its traditional global leadership in the face of growing China, does not stand on ceremony in words and deeds and directly speak about what China is preventing them from, in this case on the European continent.

Another confirmation of this was the speech on June 3, 2020 of the former adviser to the President of the United States on national security (20.01.2009 - 08.10.2010), full (four-star) US Marine Corps retired James Logan Jones (James Jones) at a meeting of the "Committee for Responding to Current threats from communist China. ”

The “Actual Threat Response Committee” is a nonprofit non-governmental organization within which right-wing American politicians develop foreign policy recommendations for the US Presidential Administration. The "Committee" was created on December 12, 1950 in Washington, and at that time its main task was to "reveal the aggressive plans of the USSR." In 1976, the “Committee” was reorganized; in 2004, it was reorganized again to meet the challenges of combating international terrorism. On March 25, 2019, it was reorganized again, its main task now is to “propagandize and clarify information on the conventional and unconventional threats posed by the People’s Republic of China”. The Chairman of the Committee is Brian Kennedy.

Jones’s speech at the meeting of the aforementioned “Committee” was described on June 6, 2020 in a material on the Da Jiyuan website (translated: “The Great Era”). This large-scale Chinese-language website, which is active on the Web, specializes in foreign policy materials, often directed against The CPC and the PRC, the website is located in Washington, DC. So, in his speech, Jones talked about “erosion tactics,” which, he said, communist China gradually adheres to in relation to the West: stage one is “penetration,” stage two is “expansion influence, ”the third stage is“ an attempt to take Western society under control. ”At the same time, Jones emphasized the need for more active actual US participation in global affairs, because, in his words,“ virtual presence is essentially non-participation. ”In this regard, he praised the US "plan" to promote the development of the Three Seas Initiative as a tool to oust the Chinese initiative from Europe "Belt and Path."

The “Three Seas Initiative” (ITM), also known as the “Baltic-Adriato-Black Sea Initiative” (BACHI), is a development of the Polish foreign policy concept of the “Three Seaside” (“Seaside”, “Three Seaside”), which, in turn, goes back to the developed Pilsudski after the First World War, the concept of "Intermarium", which involved the creation of a confederation of Eastern and Central European states.

Modern ITM is an informal association of 12 countries of Central and Eastern Europe: Austria, Bulgaria, Croatia, Czech Republic, Hungary, Latvia, Lithuania, Estonia, Poland, Slovakia, Slovenia, Romania, which emerged in 2016 on the initiative of Poland and Croatia and acting as political and economic platform for the development of regional projects in the field of infrastructure, energy and digital interaction. At the Munich Security Conference on February 14-16, 2020, US Secretary of State Pompeo announced (and Jones also drew attention to this in his speech) that the United States intends to finance projects to increase the energy independence of ITM member countries. To this end, the United States plans to send $ 1 billion to the ITM investment fund through the International Development Finance Corporation, the US government structure created in 2019, which finances various projects in emerging markets.

It is noteworthy that with their “yard of bucks” the US “shoots with a doublet” at the energy independence of the ITM member countries: on Russian energy supplies to Europe and on the Chinese initiative “Belt and Way” in Europe, because there is no energy component in it principle.

Judge for yourself. As follows from the mentioned article by Tsvyka, the interaction of China in this case with the ITM member countries is as follows.

Hungary: Memorandum of Understanding with China on the Belt and Path Initiative; membership in AIIB; “16 + 1 format”; participation in land infrastructure development projects.

Slovakia: Memorandum of Understanding with China on the Belt and Path Initiative; “16 + 1 format.”

Czech Republic: Memorandum of Understanding with China on the Belt and Way Initiative; “16 + 1 format”; participation in land infrastructure development projects.

It is difficult, of course, to unambiguously evaluate the statement of the former Secretary of the US President for National Security, Jones, that the United States intends to oust the Chinese Belt and Way initiative from Europe with the help of the home-grown Polish Three Seas Initiative. For the states of the Three Seas, traditionally playing the role of a “buffer” between Russia and the Western Heartland, are likely to follow the path of the “affectionate calf sucking two queens”, that is, they will not choose either with China along the Belt and the Way, or for the next American billion, and they will try to receive both Chinese investments in infrastructure projects and American money for “energy independence”.

In other words, the United States is unlikely to succeed in ousting China from Europe by feeding its Eastern and Central European “customers”. With a greater degree of probability, the process will proceed as Jones described it: phased and inexorable, “erosive” consolidation of China here and there in Europe with difficultly predicted consequences. After all, it is one thing - hundreds of thousands of Asian-African refugees, whom Europe is having difficulty, but "digesting" with its institutional order. And a completely different matter - the creeping, “erosive”, but gradually all-encompassing Chinese presence, no less, if not more, than the European Union, institutionalized by the Chinese state. For what are the strategic plans of the Central Military Council of the CPC, what is it, the Central Military Council of the PRC, and others with it the governing bodies of the Central Committee of the CPC, is good news.

Ctrl Enter
Noticed oshЫbku Highlight text and press. Ctrl + Enter
We are
Results of the week. "God forbid to see Russian revolt, senseless and merciless!"Strangulation: the context, conduct and consequences of the American naval blockade of China
Military Reviewin Yandex News
Military Reviewin Google News
26 comments
Information
Dear reader, to leave comments on the publication, you must to register.