Why did Hitler visit the Latvian Malnava on July 21, 1941: from the history of World War II 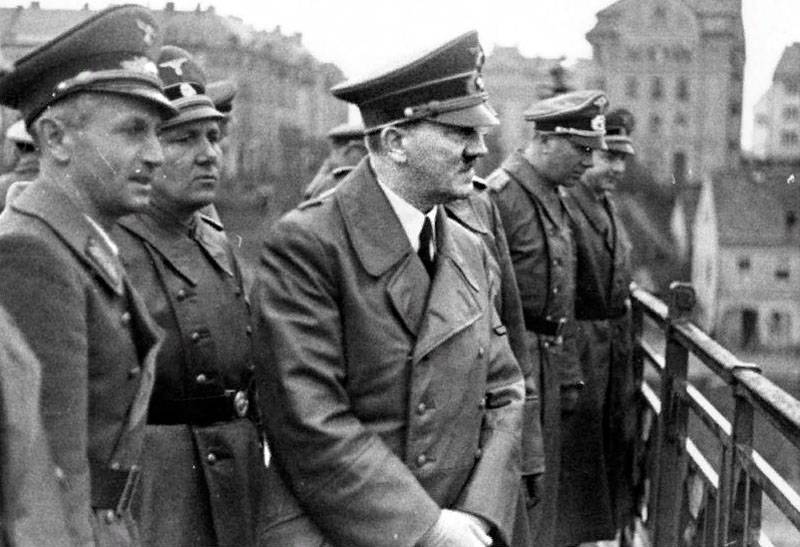 Any information related to the trips of the head of Nazi Germany to the Soviet territories occupied during the initial period of the Great Patriotic War is usually surrounded by a huge number of speculations and versions, which sometimes can be difficult to find out for truth. This applies to the fullest extent to Hitler's first visit to the occupied territory, which he carried out literally a month after the treacherous attack on the USSR. What did he forget in Malnava?


Initially, the talk about the fact that on July 21, 1941 Adolf Hitler spent some time on the territory of the Malnava estate, located on the territory of present-day Latvia, was considered by most serious historians as gossip. Yes, it was in the building of this estate, where an agricultural school was located before the war, during the week the headquarters of the Army Group Sever, headed by Field Marshal Wilhelm von Leeb, were headquartered. Yes, as far as is known, the head of the Third Reich made around this time “inspection trips” to the Eastern Front. But was he in Malnava?

Doubts dispelled several testimonies: records found in the diaries of one of Hitler's adjutants, as well as in a special album by the German General Staff, which clearly indicated the time and place of the visit, and even had a corresponding photo. Living witnesses were also found, who in 1941 were children who studied at the Malnava Agricultural School and saw with their own eyes what was happening there on July 21. The final argument was the newsreels found in the archives, in which the Nazi leader’s car drives through the gate, which is completely identical to the entrance to the Malnava estate. The entry has been preserved to date.

So, Adolf Hitler really visited that territory of Latvia that day, in essence, already in the rear of the Wehrmacht advancing to the east. The flight from Germany was carried out on a special military transport "Junkers", accompanied by the same exact reserve aircraft and "Messerschmitts" cover. To move Hitler with his usual comfort and pomp even special special six-wheel Mercedes cars were delivered. Field Marshal Wilhelm Keitel and a whole group of "court" photographers and newsreels accompanied the chief Nazi on a trip. 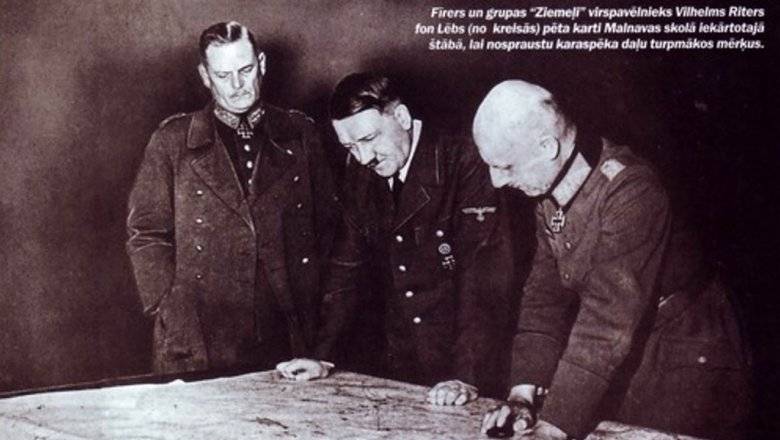 Archival photo posted in the Latvian press. Meeting in Malnava July 21, 1941
However, why did Hitler choose these places and times? After all, since June 22, fierce hostilities have been waged, as we know, from the Barents to the Black Sea, and almost everywhere did the Nazi troops move forward, albeit not as fast as envisioned by the Barbarossa plan? Wouldn’t it be more logical to expect the Führer to appear somewhere in the Moscow direction, at the headquarters of Army Group Center?

The thing is that in July 1941 Moscow was not Hitler's main goal, priority in the war. The south and south-east of Ukraine, with their industrial and agricultural areas, the oil-bearing Caucasus, the Volga region, the Don - that’s where he aimed, trying to capture these regions in the first place.

The capture of Leningrad played a special place in Hitler’s cannibalistic plans. In his deep conviction, the occupation and subsequent destruction of this city, the “cradle of the revolution," the cultural capital of Russia, in addition to resolving a number of military-strategic issues, would have had a tremendous demoralizing effect on the enemy. There is no doubt that on July 21 he arrived at Leeb’s headquarters precisely in order to “accelerate” the attack on Leningrad and find out why, in his opinion, the North group did not advance enough.

According to the recollections of witnesses at the headquarters of the heavy conversation, Hitler expressed his extreme dissatisfaction with the actions of the inspected group of forces and stated that it “could not really concentrate” and “did everything wrong” in general. The Führer reacted very sharply to the Field Marshal’s attempts to bring the distinguished guest to the real state of affairs, including problems with supplying the troops with everything necessary, saying goodbye to Leeb that, according to him, the Soviet military leaders who had left the Baltic states “were all shot ". More than a transparent hint ... However, the Field Marshal escaped with only removal from command at the end of 1941, and in 1945 with a “slight fright” - he was lucky to surrender to the Americans.

Leaving Malnava, Hitler was in a very bad mood. He even pointedly refused to participate in breakfast with the officers and generals of the headquarters, which had already been laid in the local dining room. Could Hitler in those hot days of the summer of 1941 begin to realize the full depth of the abyss into which he rushed headlong, dragging an army and a country behind him? Quite. After all, the resistance that the Red Army provided could not but puzzle the enemy.

The trip did not go without consequences - literally the next day Hitler would sign an addition to OKW directive No. 33, according to which the 3rd Army would be transferred to the disposal of Army Group Sever to “cover its right flank and encircle Leningrad” tank group shot from the central (Moscow) direction. Still raving about conquest, the leader of Nazi Germany will make one mistake after another.

Ctrl Enter
Noticed oshЫbku Highlight text and press. Ctrl + Enter
We are
Diplomats of the People's Commissariat of Defense: on the eve and during the warMyths of the Great Patriotic. Papier mache helmet
Military Reviewin Yandex News
Military Reviewin Google News
60 comments
Information
Dear reader, to leave comments on the publication, you must sign in.