Little-known wars of the Russian state: the fight against the Crimean Khanate in the second half of the XVI century. 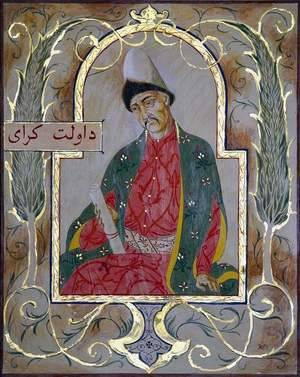 The successful actions of Moscow against the Kazan and Astrakhan khanates, the strengthening of the Russian positions in the Nogai Horde could not alarm the rulers of the Crimea and the Ottoman Empire. There was a threat to the domination of the Crimean Tatars and Turks in the southern Russian steppes. In the summer of 1550, the Russian commanders twice led the troops to prevent the attack of the Crimean troops on the Seversk, Ryazan and Meshchersk lands. So, in August, Russian troops came out to meet 30 thousand. Tatar army, the enemy did not accept the battle and retreated. In the fall, the Crimean troops attacked the Russian frontier lands, trying to ease Moscow’s pressure on Kazan. The attack of the Tatars was repulsed. Another attack was repelled in December 1550. Russian commanders managed to control the situation in southern Ukraine. The Russian government, despite the heavy war with Kazan, was forced to strengthen the southern borders. In April, the new city of Mikhailov was built on the Prone River, 1551. The city became an important link in the defense of the southern borders.

The situation deteriorated sharply when Devlet-Girey came to power in Bakhchisarai, with the help of Turkish troops who occupied the Khanate in 1551 year. In the summer of 1552, he began his first campaign against the Russian state. Moscow received several warnings about the attack and managed to prepare well. The Crimean army originally went to the Ryazan land as a racket to break through to Kolomna. However, soon the Crimean Khan received the news that Tsar Ivan IV was standing near Kolomna with most of his army, waiting for the Crimean troops. Tatars changed their plans and turned to Tula. But this step of the enemy did not change the situation, the Russian army was assembled to march on Kazan, and it could be sent to any Russian city that was attacked.

21 June in Kolomna received a message about the entry of the Crimean horde in the Russian limits. On this day, advanced Tatar detachments approached Tula. To support the forces of the Tula garrison (commanded by voivode Grigory Temkin-Rostovsky), regiments were moved from Kashira, Rostislavl and Kolychev (15 thousand soldiers). At this time, news came to Kolomna that another detachment approached Tula, followed by the Crimean Khan himself with the main forces, the Janissaries and the artillery. Having received this news, Ivan Vasilyevich sent an army under the command of Prince Ivan Mstislavsky for Oka, and at the head of the Tsar's Regiment and the Novgorod ratification he went to Kashira.

At this time, the enemy began to assault Tula, trying to capture it before the arrival of the Russian troops. On July 22, the Tatars fired at the city with cannons, and then went on an attack, and the Janissaries of the Turkish Sultan also participated in it. The assault was repulsed with great difficulty. In the morning the battle was to resume. However, the defenders of Tula, having received news of the arrival of reinforcements, were encouraged and made a sortie in the morning. The attack of the Russian soldiers was unexpected for the enemy, and the Tatars suffered heavy losses. In addition, the defenders of Tula captured all Turkish artillery. This defeat forced Devlet Giray to lift the siege and retreat. The courage of Tula’s defenders largely predetermined the fate of Kazan, which was seized by October 2 1552. The Crimean Khanate could not bind the Russian forces in the south to support Kazan.

However, frequent insurrections and uprisings, in particular the Cheremis war of 1552 — 1557, forced the Russian government to keep a significant military grouping in Kazan. This weakened the combat capabilities of the Russian army. In the struggle against the Crimean Khanate, Moscow had to limit itself to the strategic defense of the southern borders of the state. In 1553, the town of Shatsk was set up in the underground places on the Sacha River. He was supposed to cover the passage to Meshcherskaya and Ryazan lands through the so-called. Shatsky gates. In 1554, on the river Shivorone, on the site of the ancient Dedoslavl, the city of Dedilov was founded. He was supposed to defend the Tula lands from the Tatar detachments marching along the Muravskaya road. In 1555, the city of Bolkhov was erected on the Nugr River, which covered Meshchersk, Kozel and Mtsensk places. In 1557, the city of Whatman City was built on the River Hupta, near Ryaskoye Pole, later renamed Ryazhsk. This fortress was supposed to cover the Ryazan land more reliably. Gradually, the border of the Russian state moved further south, freeing up vast areas of fertile land for economic activity. Therefore, we had to change the strategy of the defense of the Russian land. The frontier along the Oka River and the Prioksky fortresses began to play the role of a rear line that defended the central regions of the state. Russian commanders began to act more decisively, trying to intercept the enemy troops in the "Field". An important role in the confrontation with the Crimean horde began to play the Cossacks. They warned the royal governors of the movement of the enemy detachments and they met the enemy on the approach to the Russian borders.

In 1555, an attempt was made to attack the enemy on its territory. It occurred after the breakdown of the peace talks with Devlet-Girey. Ivan the Terrible sent to Mamai-Meadow 13-th. army under the command of the boyar Ivan Sheremetev and the okolnichy Lev Saltykov. Rat marched on a campaign 23 June (2 July) 1555 g. Russian regiments marched south by the Muravsky Way. In the upper reaches of the Mzhi and Kolomak rivers, the Sheremetev and Saltykov troops joined up with the Ignati Bludov detachment. The governors received the news that Devlet Giray is leading the army to the Ryazan and Tula lands. With the Crimean cavalry were Turkish janissaries and artillery.

Having learned the route of the movement of the Crimean troops, the Russian commanders divided their army into two parts. 6-thousand a detachment under the command of Shiryay Kobyakova and Grigory Zhelobov attacked and captured an enemy wagon train (there were up to 60 thousand horses in it). The second detachment, in which 7 was thou. Thousands of warriors led by Sheremetyev went to the main enemy forces, although the enemy had an overwhelming superiority in forces (the Crimean "tsar" led the 60-thousand army). The Russian governors hoped to catch the enemy in a "war" when the Tatar army was divided into penguin troops with the aim of seizing full. But Devlet-Girey, having learned about the concentration of significant Russian forces on the border, did not disband the army into troops to plunder villages and capture people, he retreated to the steppe. As a result, the Russian detachment encountered in open battle with the entire Tatar horde, angered by the failure and loss of the convoy.

24 June (3 July) 1555 of the year near the village of Sudbishchi (modern Novoderevenkovsky district, Oryol region) Russian 7-th. detachment entered into a difficult two-day battle with the Crimean Tatars. After a fierce battle, the detachment of Ivan Sheremetev was defeated, the governor himself was seriously wounded. Part of the Russian forces under the leadership of the governor Alexei Basmanov and Stepan Sidorov (remnants of the Forward and Watchtower regiments, numbering about 2 thousand soldiers) withstood the oak forest, where the military train was stationed, it was strengthened in it. Other surviving warriors made their way to them. The Russians successfully repelled all enemy attacks, which continued until the deep evening. Crimean Khan Devlet-Girey, fearing the approach of the Russian troops from Tula, stopped the battle and led the troops beyond the Sosnu River.

Despite the defeat of the Sheremetev detachment, the Devlet-Girey campaign against Russia was considered unsuccessful in Bakhchisarai and Moscow. The Tatar army was forced to retreat from the Russian border without pollen and loot, the Tatars lost their wagon train ("Kosh").

In 1556, Russian troops inflicted a series of small, but painful "injections" on the Crimean Khanate. At first, the serving Cossacks, under the command of Mikhail Groshev, defeated the Crimean detachment in Dikoy Pole. Then the army was sent to the Dnieper River under the command of Matvey Dyak Rzhevsky. On the way, she was joined by a squad from 300 Zaporozhye Cossacks from Kanev. Moscow and Zaporozhye warriors on light riverboats descended down the Dnieper and devastated the neighborhoods of the Turkish fortresses of Islam-Kerman and Ochakov. On the way back, the Russian warriors repulsed the attack of the Crimean detachment pursuing them and returned safely, passing to their borders along the Lithuanian side of the r. Dnieper.

Simultaneously with the detachment of Rzhevsky, troops were sent under the command of Dinili Chulkov and Ivan Maltsev to the River Don. Russian soldiers descended to Azov and destroyed a small Crimean detachment, captured the "tongues" with important information. In the same year, the Crimean Khanate attacked the Don Cossacks. Their army, under the command of Ataman Mikhail Cherkashenin, crossed the Sea of ​​Azov and destroyed the environs of Kerch.

In 1556, Ataman Mikhail Eskovich arrived at the tsar Ivan the Terrible. On behalf of the Kanev elder, Prince Dmitry Vishnevetsky, who left the Lithuanian service, he asked the sovereign of Moscow to take into his hand the Cossack settlement he set up on the island of Khortytsya. The children of the boyars, Andrei Shchepotev, Nechay Rtischev and Ataman Mikhail Cherkashenin, were urgently sent to the Dnieper. They brought Zaporozhye Cossacks royal salary and certificate, where they were called to serve Moscow. In October, the Moscow ambassadors returned and reported that Vishnevetsky "went to fight the Crimean uluses", taking the service of the sovereign of Russia. The Cossacks of Vishnevetsky managed to seize Islam-Kermen fortress with a sudden blow, destroyed the garrison there and took out the guns to Khortytsya.

Russian governors continued to conduct long-range reconnaissance in Dikoy Pole. The squad of Matthew Rzhevsky and Yuri Bulgakov retired from their borders more than 300 versts. In October, the governors reported that the Crimean "king" disbanded the army. Only small penguards of 50-200 people went to Russia. They did not represent a great danger and Ivan IV was able to withdraw shelves from Kaluga, Vorotynsk, Kozelsk and other cities, leaving small barrage detachments.

The Crimean Khan was concerned about the activity of the Russian forces and the emerging alliance of Moscow and Zaporizhzhya Cossacks, as well as the attack of the Don Cossacks on the east coast of the Crimean peninsula. He sent Ivan Vasilyevich a message about the desire to resume peace negotiations with the Russian state. However, the Devlet-Girey peace proposals did not apply to Zaporizhzhya Cossacks. In the spring of 1557, the Crimean ruler, without stopping negotiations with Moscow, attacked a Cossack town on Khortitsa with a large army. For almost a month (24 of the day), the Crimean Tatars tried to seize the island, but the Cossacks fought off all their attacks. The Tatars were defeated and retreated "with great shame." Dmitry Vishnevetsky, expecting support from Moscow, announced the victory to the Russian government. However, at this time there was an intensive preparation for war with Livonia, and Moscow lost interest in continuing the war with the Crimean Khanate. Bakhchisarai did not want to annoy, so as not to wage war on two fronts. D. Vishnevetsky had to clear the island, transfer Cherkasy and Kanev to the Grand Duchy of Lithuania and go to Moscow. The prince was generously rewarded, he was given the city of Belev "with all the suburbs, estates and townships" in possession.