New deadlines for launching the frigate of project 22350 Admiral Golovko 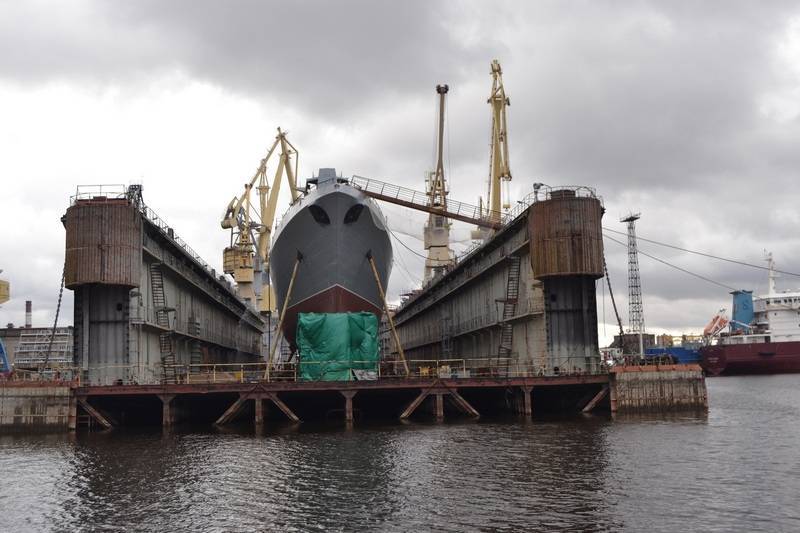 The third frigate of project 22350 Admiral Golovko will be launched on May 22. In connection with the coronavirus, the ceremony will be held with a minimum number of participants. This was reported by TASS with reference to a source in the military-industrial complex.

The launch of the newest frigate is scheduled for May 22. The ceremony will be held with a minimum number of participants in connection with the coronavirus
- the agency leads the words of the source.

Earlier, the press service of the Severnaya Verf shipyard, which built the frigate, announced that the launching of the ship was planned for late April or early May. However, the deadlines were postponed due to coronavirus infection. Currently, Admiral Golovko is in a floating dock, where he was moved from the boathouse at the end of March. Outboard work and painting of the lower part are underway on the ship.

"Admiral Golovko" is the third ship in the series of frigates of project 22350 and the second serial. Laid down on February 1, 2012, transmission the fleet scheduled for 2021. At present, the head frigate of project 22350 Admiral Gorshkov is serving in the Russian Navy; the first serial Admiral Kasatonov is getting ready for commissioning. The fourth frigate of the series (third serial) "Admiral Isakov" was laid down on November 14, 2013 and is under construction. Two more frigates of this project - Admiral Amelko and Admiral Chichagov - were laid at the Severnaya Verf shipyard on April 23, 2019.

Note that Admiral Golovko is the first frigate of project 22350 with a fully Russian power plant. The leading and first production frigates of Project 22350 - Admiral Gorshkov and Admiral Kasatonov - are equipped with diesel engines of Russian production, but gas turbine units (GTU) manufactured by the Ukrainian company Zorya-Mashproekt are used as afterburners. At the "Admiral Golovko" installed domestic analogue of the Ukrainian gas turbine. According to open information, the main power plant of frigates of project 22350 is a gas turbine engine with a total capacity of 65 thousand liters. from. and diesel generators with a total capacity of 4 thousand kW.

Ctrl Enter
Noticed oshЫbku Highlight text and press. Ctrl + Enter
We are
Severnaya Verf Shipyard named the date of launching the frigate Admiral GolovkoSevernaya Verf Shipyard will launch the third serial corvette of the 20380 Stable project in May
Military Reviewin Yandex News
Military Reviewin Google News
49 comments
Information
Dear reader, to leave comments on the publication, you must to register.