Alcohol, tobacco and sweets. On the specific contentment in the Red Army 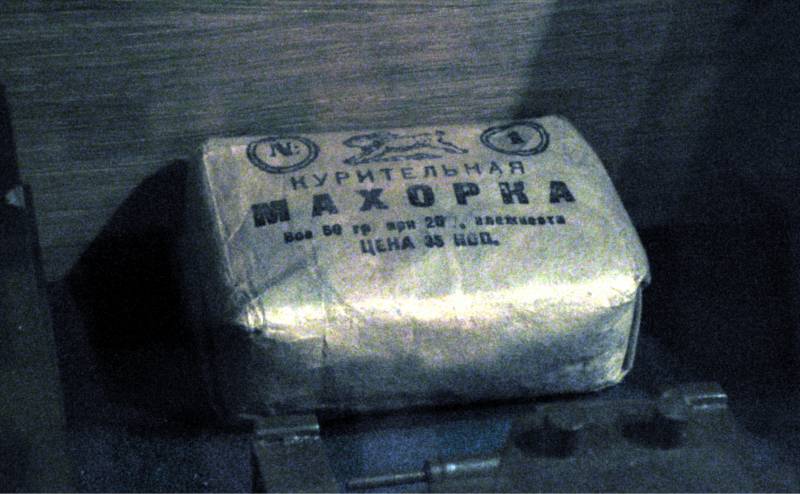 In a war, soldiers and commanders should first of all be armed and provided with ammunition, dressed in shod clothes and, if possible, fed well. Nevertheless, in the stories about the supply of our heroic warriors during the Great Patriotic War, questions remain behind the scenes of providing them with things, perhaps not as useful as rich porridge or fresh bread, but in war, we will be frank, often very, very much in demand.

The debate about the advisability of issuing the famous People’s Commissars of XNUMX grams at the front has been ongoing for a long time and very intensively. For some, especially sophisticated in the cleanliness of their participants, it comes to accusations of the leadership of the country and the army of soldering soldiers. What can I say? It remains only to repeat for the hundredth time: it is not for us to judge. Yes, and there was no soldering in sight. Vodka in the Red Army appeared even during the "winter war" with Finland with the filing of the then People’s Commissar of Defense Kliment Voroshilov, hence the "people's commissars." The meaning of the vodka portion in the situation at that time consisted in a primitive “sugrev” and the prevention of colds.

The rations of the Great Patriotic War should rather be called "Stalin", since from the very beginning and until the end of the war it was the Supreme Person who kept this issue under his personal control, and he signed the relevant decisions of the GKO. All his life, Joseph Vissarionovich was tolerant of drinking, but at the same time he was a categorical opponent of drunkenness. And the vodka "policy" in the Red Army was built accordingly. Initially, by the decree of the State Defense Committee of August 22, 1941 No. “On the Introduction of Vodka for Supply in the Active Red Army”, one hundred grams per day was given to everyone who was “in the units of the first line of the active army”. That is, exclusively at the forefront.

However, already in May of next year, a new regulatory document on the same topic was released. Comrade Stalin brought to him for signing the project mercilessly messed with his beloved in red pencil, at the same time tightening it pretty much. From now on, only those who conducted offensive operations received the right to a daily cup. Initially, the proposed abstract "having success in hostilities" the Supreme crossed out, as well as the inscribed "double dose" of 200 grams. Everyone else, albeit at the front, was allowed to drink on public holidays and the anniversary of the formation of the unit. At the same time, the leader also removed the International Youth Day from the list, leaving, however, the All-Union Physical Culture Day. Well, the professional holiday of aviators, of course ...

On the eve of the Battle of Stalingrad (November 1942), the "People's Commissars" were again returned in full - for the "front end". From now on, 50 grams per day was also supposed for fighters of regimental and divisional reserves, a construction battalion that performed work in the combat zone, and even wounded. If doctors allow, of course. This continued until April 1943, when the daily issue of vodka was again left only to the "units leading the offensive." Immediately after the Victory, in May 1945, the "People's Commissars" were completely canceled.

It is worth noting that the "alcohol allowance" was somewhat different in the arms of service and even in different places. For example, on the Transcaucasian front, taking into account local specifics, vodka was replaced with wine: 200 grams of fortified or 300 grams of dry. Dry wine also entered the diet of Red Navy submariners. At the same time, the sailors had an iron rule - either drink it yourself or refuse, do not pass it on to another! Those wishing to guard sobriety were entitled to compensation of 10 rubles per serving of alcohol. Good money for that time.

The tobacco supply did not survive such perturbations. From the beginning to the end of the Great Patriotic War, each fighter was supposed to have 20 grams of shag per day. Also for a month were issued seven “books of smoking paper” and three boxes of matches. There were absolutely not enough matches (especially in trench conditions), and therefore most smokers of the Red Army quickly acquired "Katyushas" - home-made lighters with an armchair and a tinder. These masterpieces of front-line craft were made, as a rule, from spent cartridges. Problems also arose with paper, and therefore the press that remained from political information was involved in the matter.

They say that Red Star was especially popular. There were also good cigarettes from Hitler's leaflets calling for surrender, since the trenches threw them into our trenches more than generously. Just catch such a piece of paper on the eyes of a particularly vigilant special officer - and the case could end with a fine, and not a smoke break. Anything happened with tobacco, either - interruptions in supply, or simply an absence in warehouses. “My grandmother’s mattress”, “Vyrviglaz”, “Light up the fascist” - so the Red Army men, inexhaustible in humor, called “smoking mixes” prepared from what would come to hand. Especially speaking is the name "berklen" - a mixture of birch and maple leaves.

Approximately at the level of grass substitutes, our soldiers "valued" the captured German smoke: "Smelly, but no fortress." But the American “Camel” obtained by Lend-Lease without a filter was praised even by inveterate lovers of terry. Those who have tried will understand why ... As always, the supply of the pilots was different for the better - they were supposed to receive 25 cigarettes or 25 grams of tobacco daily. Especially popular was Belomor, Kazbek was considered chic for the command staff. Comrade Stalin smoked Herzegovina Flor, crushing it into his famous pipe.

With tobacco contentment, in fact, the appearance of sweets in the Red Army is also associated. Initially, our soldiers were not spoiled by anything - the situation was not the same. Sugar for tea managed to get hold of - and then for happiness. According to the norms, it was supposed to be 35 grams per day, but then according to the norms. Such goodies as condensed milk or chocolate were available only to pilots, and even then in dry soldering. But in August 1942, the People’s Commissariat of Defense made a wise decision: from now on, all women in the army who didn’t want to poison with shag, could receive 200 grams of chocolate or 300 grams of sweets per month instead! The initiative in the troops, apparently, was taken with a bang, because after three months this rule was extended to all soldiers and commanders of the Red Army, regardless of gender. Do not smoke? Keep the above amount of sweets instead of tobacco! Well, or an extra 300 grams of sugar - that's how lucky.

As follows from the memoirs of the front-line soldiers left to us, not all soldiers used the "People's Commissars". As a rule, they drank during the hours of calm, after a hard battle, on holidays or in remembrance of the fallen comrades. Combat experience quickly proved the danger of "taking on the chest" before the battle with the enemy. Everyone had a choice. Someone walked to the Victory, puffing with a cigarette or a cigarette with a shag, someone - chewing an "alternative" candy. The main thing - have come!

We are in Yandex Zen
Sights that hurt the soul
"To Berlin!" How was the final blow prepared for the Third Reich
188 comments
Information
Dear reader, to leave comments on the publication, you must to register.