Putin's next appeal: on non-working days, a pandemic and economic support 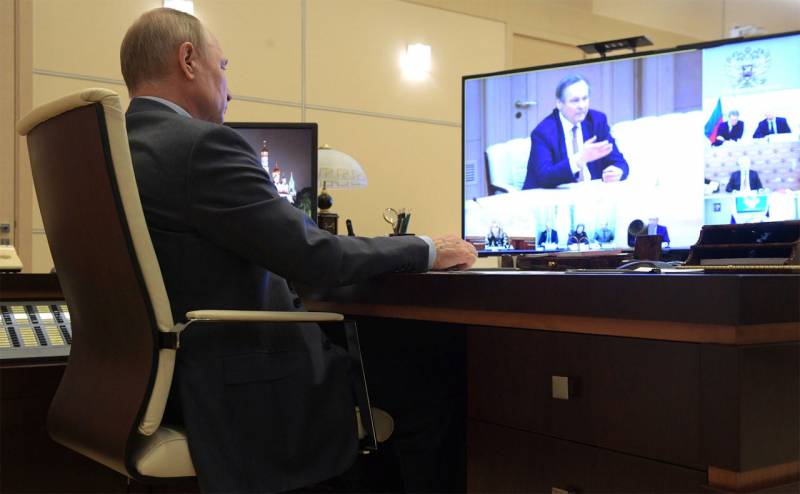 Russian President Vladimir Putin spoke at an online meeting with heads of Russian regions. As expected, an extension of the self-isolation regime called “non-working days,” and what else?


Actually, no one doubted that non-working weeks would be extended. So far, the president has announced their extension until May 11. May 6,7 and 8 will be considered non-working days, while the salary will be saved. So the Russians who are in a regime of self-isolation can be sure: within the next 2 weeks, the lifestyle that has already become familiar will not change.

But what else, besides this expected information, have we heard from the head of state? On the shortage of protective equipment for doctors, the increase in production of which Putin, after a month of the regime of self-isolation, instructed the Ministry of Industry and Trade. The head of state also said that Russia has begun from scratch the production of several drugs for the treatment of coronavirus. As for his forecast regarding the course of the pandemic, the president assures: the peak of the pandemic has not yet been passed.

At the same time, the president believes that Russia needs to prepare for any development of events with the further spread of a dangerous disease. The subtext of these words is clear: Russians can expect anything from the spread of the disease, as well as from the economic situation. By the way, Putin paid special attention to the latter in his speech.

The Russian economy, according to the president, is receiving unprecedented support against the backdrop of the crisis caused by the coronavirus pandemic. Several packages of measures have been taken to help the economy. The head of state did not forget to intimidate officials with personal responsibility for not fulfilling the plan.

The head of state recalled the great difficulties faced by individual entrepreneurs, self-employed citizens, noting that they needed help. But we did not hear the specifics: the government only has to prepare new measures before May 5.

Meanwhile, according to official figures, about 20 million Russian citizens are not employed. And for the most part these are not parasites and marginals, but ordinary hired workers or self-employed small entrepreneurs. But the problems of this large category of people, which turned out to be virtually without a livelihood, were not mentioned either in previous speeches or in this.

Interestingly, the president instructed to prepare a plan for the gradual lifting of restrictions starting from May 12. Moreover, again everything is left to the regions: the governors must decide for themselves where and how to cancel restrictive measures.

Given that for many years the vertical of power functioned in the country, the heads of the regions will have to accustom themselves to independence. And against the backdrop of a pandemic, it will not be so simple: most regional leaders will act with an eye on Moscow. That is, when Moscow Mayor Sergei Sobyanin lifts the restrictions, then they will begin to lift them in the Russian regions.

Ctrl Enter
Noticed a mistake Highlight text and press. Ctrl + Enter
We are
Reports from the militia of New Russia for 27-28 September 2014 of the yearInterview of Vladimir Putin with Radio Europe-1 and TF1
550 comments
Information
Dear reader, to leave comments on the publication, you must to register.