The war broke into the life of the Soviet people all of a sudden, in the warm June days of 1941, that morning, when young school graduates met the dawn, had just begun their life, were happy and dreamed. But the war crossed out everything. In their incomplete 18 years, they went to the front. In the Great Patriotic War, the fate of our Motherland was decided. And no matter how many years have passed since then, we will always remember the names of heroes who defended our homeland at the cost of their lives. They defeated a merciless and cruel enemy. Won truly Great Victory! They fought for the sake of life on earth, so that there was always a clear and peaceful sky above us. We will always remember their exploits, we will be proud of the heroes!


I want to devote my article to the Hero of the Soviet Union Nikolai Ivanovich Gulimov, whose name is my school number 9, one of the best in the city of Azov.

How important it is to love your Motherland and fight for life and a bright world on earth! I recall the first patriotic lessons, writings about the motherland, interesting meetings with veterans, solemn rulers and laying flowers at the monument to Nikolai Gulimov in the courtyard of the school. According to newspaper articles located in the school museum of military glory, and materials from the Azov Museum of Local Lore, we traced his military battle path.

Gulimov Nikolay Ivanovich was born on July 5, 1924 in the village of Razvetye, Kursk region. In 1941, he moved with his family to the city of Azov. He worked at the factory number 318 (now AOMZ). He was a member of the Komsomol.

In 1942, Nikolai Gulimov was called up to the front. He was 18 years old. He quickly mastered the specialty of a radio operator. He went the battle path from a private to the head of the radio company communications company. He fought on the Transcaucasian and North Caucasian fronts, participated in the Krasnodar offensive operation.

Despite his young age, he earned military awards: two medals “For Courage” and a medal “For Military Merit”. As part of the 44th, 28th, 5th and 46th armies, he liberated the southern part of Ukraine, Romania, Bulgaria, Hungary. He took part in crossing the Dnieper, Tisza, and Southern Bug rivers. Particularly distinguished himself in the Budapest offensive operation.

In the stubborn battles for the liberation of Budapest after a carefully conducted reconnaissance operation, the 46th Army concentrated its forces to deliver the main blow. The fighters of the assault group of the 305th regiment had the main task - to capture and hold the bridgehead until the main forces arrived on the right bank of the Danube, in the area of ​​Erci (Hungary). The combat mission of Nikolai Gulimov was to conduct adjustment of the fire of Soviet artillery.

On the night of December 5, 1944, during the crossing of the Danube River under heavy artillery and mortar fire, Nikolai Gulimov was wounded several times, and the boat was broken and sank. Despite the wound, he threw himself into the icy water and swam to the shore. Carried out a radio station. 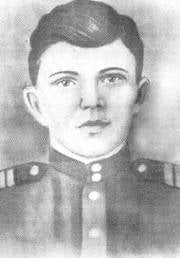 Machine-gun and machine-gun fire did not stop, explosions thundered. The fighter tuned the radio and transmitted the exact coordinates of the enemy, so that our troops broke through the enemy defenses. Nikolai Gulimov was again seriously wounded several times, but continued to provide uninterrupted radio communications, and kept adjusting the fire of Soviet artillery. A bridgehead was seized on the right bank of the Danube River. In this battle, Nikolai Gulimov died the death of the brave. 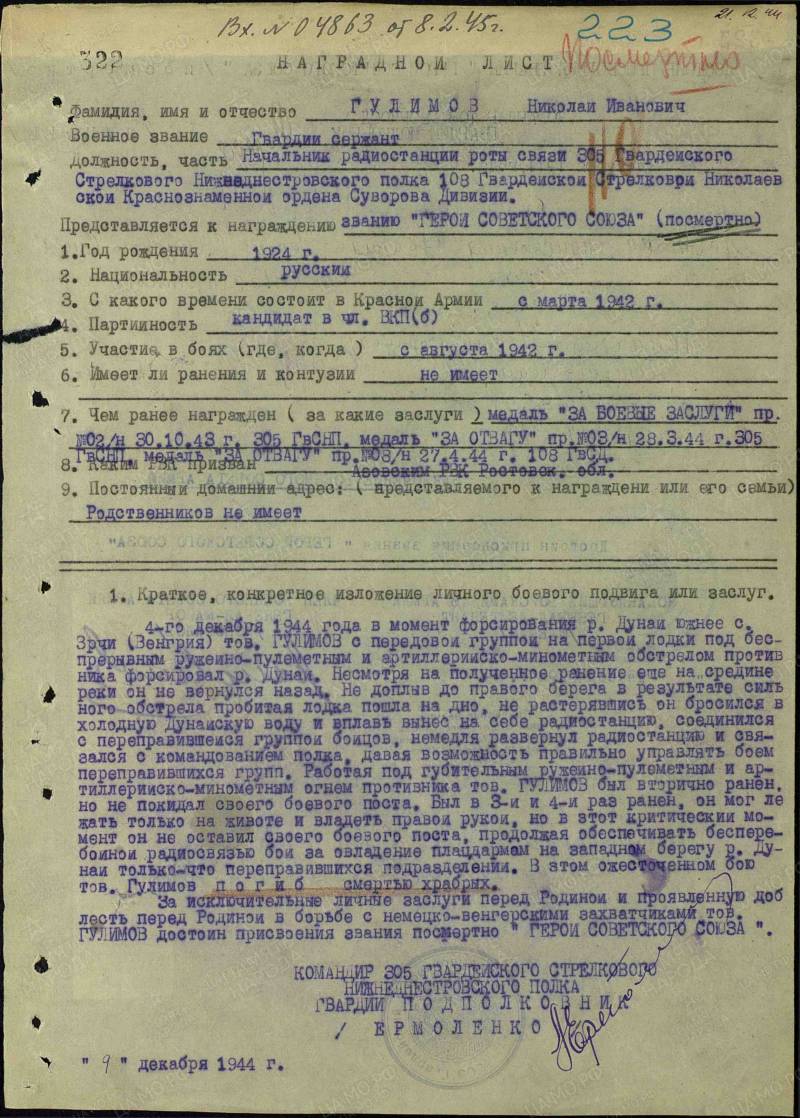 For the younger generation, the feat of N. I. Gulimov serves as a vivid example of the fulfillment of military duty and selfless love for the motherland.

The director of school No. 9, Evgeny Karasev, pays great attention to the patriotic education of children and youth. Schoolchildren actively participate in the regional projects “Victory Diary”, in city actions “How was it at war?”, In contests of author’s poems and prose “Voice of Victory”, in actions “Immortal Regiment”, “Memory Watch”, “Victory Alley” . In the school museum of military glory, lessons of courage and meetings with veterans of the Great Patriotic War are held.

Evgeny Vladimirovich Karasev enjoys well-deserved respect and authority among the residents of the city, was elected chairman of the Azov City Council - the head of the city of Azov. For his great contribution to the cause of military-patriotic and spiritual-moral education of youth, he was awarded the title "Honorary Worker of Education of the Russian Federation", was awarded the medal of the Order "For Merit to the Fatherland of the II Degree", and the badge "Excellence in Public Education".