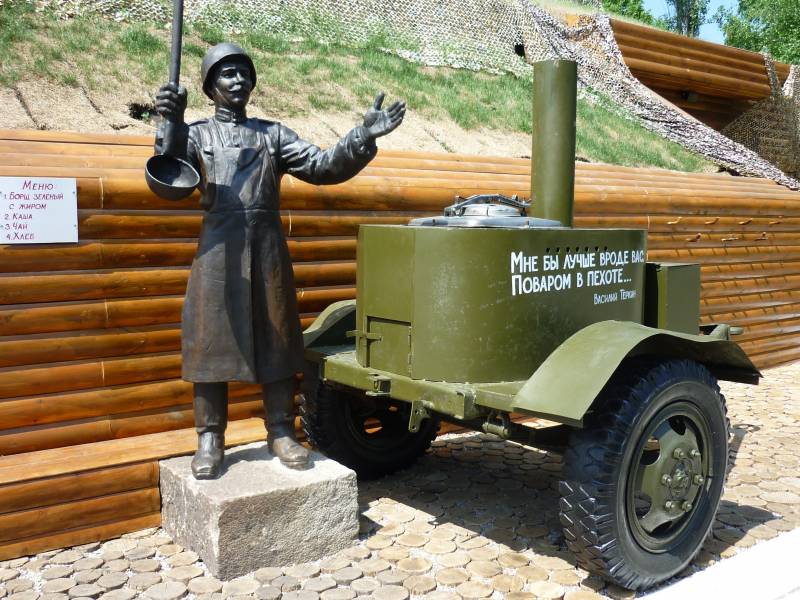 The topic of nutrition of our soldiers at the final stage of the Great Patriotic War is one of the least covered in historical and specialized literature. This is not surprising, since, raising it, it is impossible to ignore the issue of trophies and similar moments that were hushed up in Soviet times in the most thorough way, as if they at least somehow diminished the feat of the soldiers and commanders of the Red Army, which had paid millions of lives for the liberation of that very Europe , entering which they finally were able to at least plenty to eat.

It must be said that the Red Army approached the beginning of World War II with fairly generous food supply standards for personnel. The soldier’s food, and especially the food of the command staff, was quite satisfying and varied: without delicacies, naturally, but more than enough so that young men under conditions of increased physical exertion could not only satisfy their hunger, but also maintain proper form.

The treacherous attack of the Nazis and their allies confused the cards in this matter. 70% of mobilization reserves from the western regions of the country went to the invaders. Almost half of the sown area was lost. There is nothing to say about the losses in agricultural machinery and the working hands of farmers. As a result, the volume of grain collected in 1941-1942 did not reach 40% of the pre-war.

Nevertheless, the dietary standards of units and divisions that were at the forefront remained virtually unchanged. The principle "Everything for the front, everything for the victory!" worked here to the fullest. Nutritional standards for other categories of military personnel were cut (there were four of them in accordance with the decisions adopted in September 1941 by the GKO and NCO of the USSR), which, in essence, meant one thing: the farther from the “front”, the worse the feeding . Poorly ate in training and spare parts, and did not indulge cadets of military schools. However, the civilian population, especially those who were sitting on “dependent” cards, was harder for everyone ...

Another question is that it was far from always possible to feed fighters according to established standards due to a huge number of objective reasons. Still, it was a war, not the Zarnitsa game or even the peacetime military exercises. Improving the nutrition of fighters, who, as you know, were far from fattening in combat units, began with the victorious advance of the Red Army to the West. Despite the fact that, leaving the occupied territories, the Nazis tried to clean up or at least destroy all the food supplies there, they did not always succeed. According to the memoirs of the war veterans, “it became better with feeding” after the liberation of Ukraine and Moldova. And then before our soldiers lay a well-fed Europe, which in 1941 came to conquer and conquer us.

And don’t, please, hypocrisy: we, born and raised in peacetime, who never knew real hunger, have no right to judge the heroes from the Leningrad Front, with our hands inserting our teeth that fell out from scurvy and chewing pine needles to save ourselves from this disease caused by the lack of elementary vitamins and nutrients in the body. Those who suffered from “night blindness”, who sometimes mowed down entire units and, again, suffered from a monotonous, poor diet for fresh vegetables and fruits (in some places they hadn’t seen such things for months or even six months). Those who ate the fallen horses and gathered under fire in the fields the barely broken wheat shoots ...

People who survived the horrors of war, passing through their own country, utterly devastated and plundered by the invaders, did not “loot”, as some gentlemen allow themselves to say today, but simply diversified their own menu. First of all, of course, due to the meat roaming around the neighborhood. The original letter of a lieutenant from Germany has been preserved, saying that his subordinates "already put a whole cow in the boiler." Some of the front-line soldiers modestly and briefly reported home that “the food had improved significantly”, and some described it with relish as “practicing who cooks the cow better”, otherwise they simply “fed up” the sausage and chicken.

It must be said that this abundance was not at all “amateur activity” of individual military personnel. The commander’s units reported that for the first time since the start of the war, they had already begun to “lay 600 grams of meat per person.” The soldier’s ration was significantly increased and improved due to local products, which many soldiers (and officers too), who came from the outback, seemed unprecedented goodies. However, again according to the memoirs of the war veterans, they more than generously shared food not only with the inhabitants of the liberated territories of Eastern Europe, but also with the Germans - especially with children and women. So feeding the failed "Aryans" from the field kitchens of the Red Army is not fiction or propaganda, but a vital thing. We were fed, where are they going to be ...

Europe nevertheless tasted our borsch, kulesh and porridge with meat (it was these three dishes that formed the basis of the nutrition of the Red Army soldier throughout the entire Great Patriotic War). But not as a conqueror, but in the role of the conquered, whom the merciful and generous Soviet warrior fed out of mercy.

We are in Yandex Zen
Fathers are the winners. Heroes of bygone days
"Cauldrons" of 1941. What happened
127 comments
Information
Dear reader, to leave comments on the publication, you must to register.