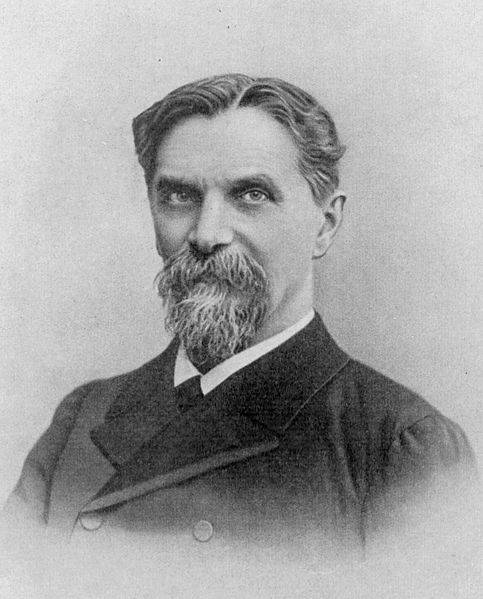 100 years ago, on April 28, 1920, the great Russian scientist Kliment Arkadyevich Timiryazev passed away. The researcher who revealed the secret of the transformation of the inanimate into organic matter. A man who was a source of light for the people.

Clement Timiryazev was born on May 22 (June 3), 1843 in the Russian capital, St. Petersburg. He belonged to one of the old Russian noble families, his ancestors left the Golden Horde and served the Moscow rulers. Clement's father Arkady Semenovich served in customs, was a senator and secret adviser. He fought with the French in 1812-1814, was known for honesty and freedom of thought, so he did not accumulate wealth. Mother Adelaide Klimentyevna was from an ancient French noble family of barons de Bode, who moved from Alsace to Russia during the French Revolution. Also in the Bode family was a fair proportion of English and Scottish roots.

Therefore, Timiryazev himself noted: “I am Russian, although a significant proportion of English is mixed with my Russian blood.” Thus, the Timiryazev clan belonged to the aristocracy. He was fluent in German, French and English.

The Timiryazev family was large and friendly. All children received a good home education from their mother. Clement not only mastered foreign languages, but also studied music, fine art, was passionate about landscape photography. His works were even exhibited. His brothers also became prominent people and influenced Clement: Vasily (a famous writer), Nikolai and especially Dmitry (statistician and chemist), who introduced his brother to organic chemistry.

Despite its high origin, Timiryazev’s life was not easy. My father was an honest servant and did not make capital. When Arkady Semenovich was dismissed from service, the family was left without income. Clement began to work as a young man. He recalled how he comforted himself with the thought that he was not sitting on the hump of the workers, like merchant sons.

In 1860, Clement entered St. Petersburg University at the Faculty of Law, then transferred to the natural department of the Faculty of Physics and Mathematics. He attended lectures by leading scientists: the chemist Mendeleev, the botanists Beketov and Famintsyn, the physiologist Sechenov, and the historian Kostomarov. He graduated from the course in 1866 with a candidate’s degree, that is, with honors. True, he was almost expelled for freethinking. Timiryazev studied the works of Marx, became his like-minded person. He developed the conviction of "duty to society" and "hatred of all, especially social untruth." As a result, the young man took part in student unrest and then refused to cooperate with the police. Education could continue only as a free listener.

The key to photosynthesis

Even at the university, Timiryazev was noted as a talented experimenter. The young scientist believed that all theories should be tested in practice. Therefore, he himself designed new devices that were used after him. After university, he was the head of the experimental agrochemical station in the Simbirsk province. A talented scientist was noticed at the Ministry of Public Education and sent to an internship abroad in preparation for the profession. For two years, Clement attended lectures by prominent Western scholars and worked in leading laboratories in France and Germany.

After returning to Russia, Timiryazev defended his master's thesis and was appointed professor at the Petrovsky Agricultural and Forestry Academy in the Moscow Region. In 1877, the scientist was invited to Moscow University. In these educational institutions, Timiryazev worked for over 30 years and made his main discoveries.

One of the students of the Academy, later known publicist and writer Vladimir Korolenko, noted:

“Timiryazev had special sympathetic threads connecting him with students, although very often his conversations outside the lecture turned into disputes on subjects outside the specialty. We felt that the issues that occupied us were of interest to him. In addition, true, ardent faith was heard in his nervous speech. She belonged to science and culture, which he defended from the waves of “severity” that swept over us, and in this faith there was a lot of sublime sincerity. Young people appreciated it. ”
The main studies of the Russian scientist concerned the process of photosynthesis. It was previously known that in the light of plants, carbon dioxide and water are converted into organic matter. But scientists did not know how this happens. Kliment Arkadyevich sent light to the plants, which passed through colored liquids. And I discovered that red and blue rays are absorbed better than yellow, and the rate of decomposition of carbon dioxide depends on this. It was Timiryazev who realized that light is absorbed due to chlorophyll grains, which give the plants a green color. He was the first to report that chlorophyll is not only physically, but also chemically involved in photosynthesis. By his research, a Russian scientist proved that the law of conservation of energy fully extends to the process of photosynthesis. Although at that time this fact was not recognized by most researchers.

Also, a Russian scientist discovered the phenomenon of light saturation. It was previously believed that the main characteristic of light is brightness. Timiryazev denied this. He found that with increasing brightness, plants actually absorb more and more carbon dioxide, but to a certain limit. After it, it is pointless to increase the brightness, and sometimes it is harmful, because moisture evaporates due to strong light. As a result, Kliment Arkadevich concluded about the "cosmic role of plants." It was this lecture that he gave at the Royal Society of London in 1903.

Timiryazev noted: “A plant is a mediator between heaven and earth. It is the true Prometheus, who stole fire from heaven. " Plants use solar energy for nutrition, create the primary organic matter that animals feed on. Plants support the chemical composition of the atmosphere, that is, give life to all organisms.

“Only by realizing his best dreams, humanity is moving forward”

Kliment Arkadievich was one of the active supporters of Darwin's evolutionary theory. As a student, he was one of the first in Russia to translate Darwin's famous book, On the Origin of Species by Natural Selection. He also wrote a series of articles about Darwin’s book and its criticism for the journal Domestic Notes. He then published the book A Brief Outline of Darwin's Theory. In fact, thanks to Timiryazev, Russian society became acquainted with Darwin's theory. The discovery of Darwin by a Russian scientist considered the largest discovery of the XIX century. He was an active Darwinist, defended the theory from criticism and distortion.

The Russian scientist was not only a theorist, but also a practitioner. He dreamed that his discoveries would be useful in the national economy. Science was supposed to make agriculture more productive. Immediately after graduation, he supervised the work at the agrochemical station to study the effect of mineral fertilizers on plant productivity. In the 1870s, while working at the Petrovsky Academy, Timiryazev built a “vegetation house” - it was the first scientific greenhouse in Russia and the third in the world. At the All-Russian Exhibition in Nizhny Novgorod in 1896, he repeated this experience.

Kliment Arkadievich actively worked on the dissemination of knowledge. The scientist wrote more than 100 popular science works, where he described the effect of light on plants and methods to increase productivity, talked about natural science and the discoveries of major scientists. Timiryazev noted that from the very beginning he set himself two main goals: science and writing for the people. For this, the Russian scientist held public lectures, which were very popular among young people. Kliment Timiryazev himself believed that it was the young generation that would lead the people along the path of progress:

“I profess three virtues: faith, hope and love; I love science as a means of reaching the truth, believe in progress and hope for you (students). ”

The pursuit of light and higher truth

Despite worldwide recognition and popularity, the authorities did not like the freethinker. In 1911, Kliment Arkadievich, despite a serious illness (after a brain hemorrhage in 1909, Timiryazev's left arm and leg were paralyzed), he left Moscow University together with other professors and teachers. The teachers' protest was related to the Casso affair. In January 1911, a circular was issued by Minister of Education L. A. Casso, "On the temporary prohibition of public and private student institutions." The document forbade holding meetings at universities; rectors had to monitor the penetration of unauthorized persons into higher educational institutions. In general, the circular violated the autonomy of universities.

Politically, the Russian scientist sought to bring science and politics closer together. He spoke as a patriot and Slavophile, for the war of Russia against Turkey, which was supposed to lead to the freedom of the Slavs. He hoped for a rapprochement between the peoples of Russia and England, which were supposed to withstand German aggression. Initially, Russia spoke out in favor of the Entente in defense of the Serbs. However, he quickly became disillusioned with the world carnage and began to work in the anti-war magazine of M. Gorky - Chronicle. Timiryazev headed the department of science and led to the participation of many prominent scientists, writers and poets in the journal.

After the February Revolution, the socialist revolutionaries promoted the candidacy of Kliment Arkadevich for the post of Minister of Education in the future socialist government. However, observing the destructive policies of the Provisional Government on the peasant and agricultural issues, the Russian scientist began to support the ideas of the Bolsheviks. Timiryazev actively supported the April theses of Lenin (on the development of the bourgeois-democratic revolution into a socialist one) and the Great October Revolution. He supported the “amazing, selfless successes” of the Red Army, which saved Russia from death, and called for it to join the army of labor, since the happiness and prosperity of the people are built only by productive labor.

The socialist revolution returned Timiryazev to Moscow University. True, he did not work long. On April 28, 1920, the great scientist died of a cold. On the occasion of the 70th anniversary of Timiryazev on May 22, 1913, another great Russian scientist, Ivan Pavlov, gave a full description of his colleague:

“Kliment Arkadievich himself, like his beloved plants, strove for light all his life, storing in himself the treasures of the mind and the highest truth, and he himself was a source of light for many generations who strove for light and knowledge and sought warmth and truth in harsh living conditions ". 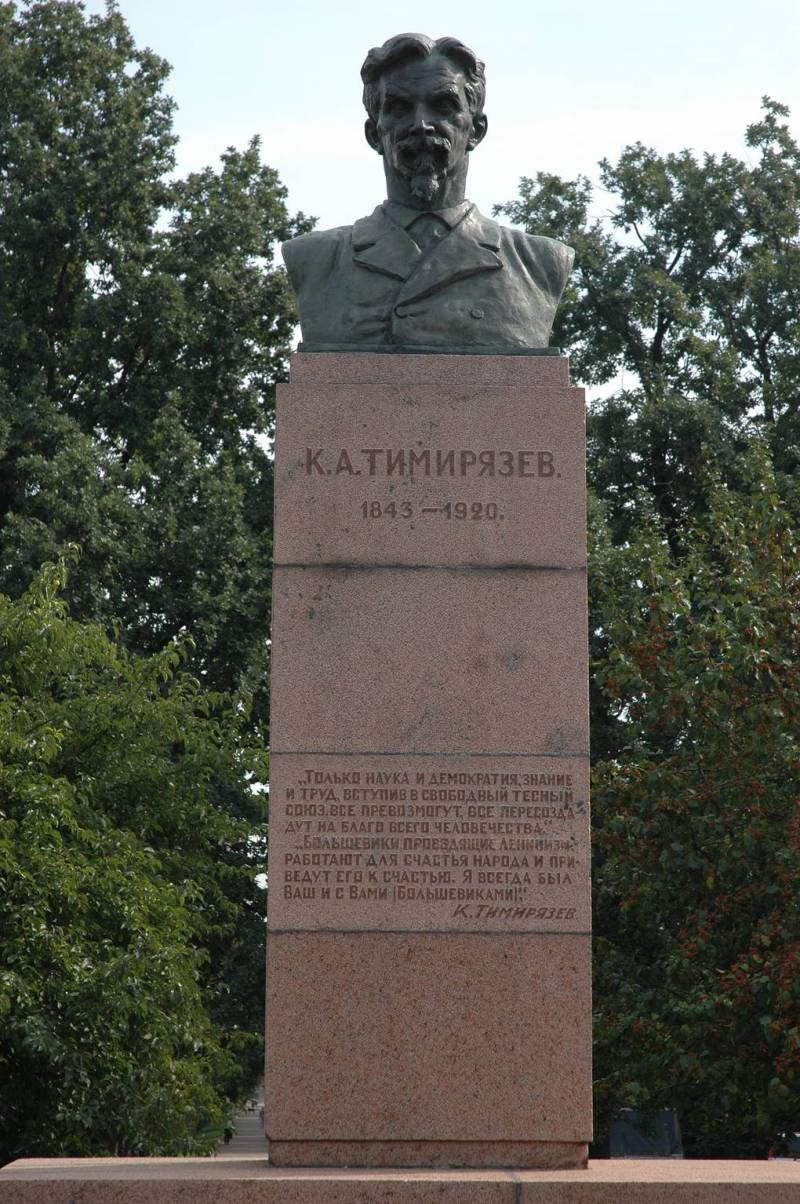 Ctrl Enter
Noticed a mistake Highlight text and press. Ctrl + Enter
We are
Petr Semenovich Saltykov. Apostle of the Russian armyVasily Kashirin: Russian troops entered Bessarabia and liquidated the Bujak Tatar horde at the start of the Russian-Turkish war of 1806-1812.
28 comments
Information
Dear reader, to leave comments on the publication, you must to register.