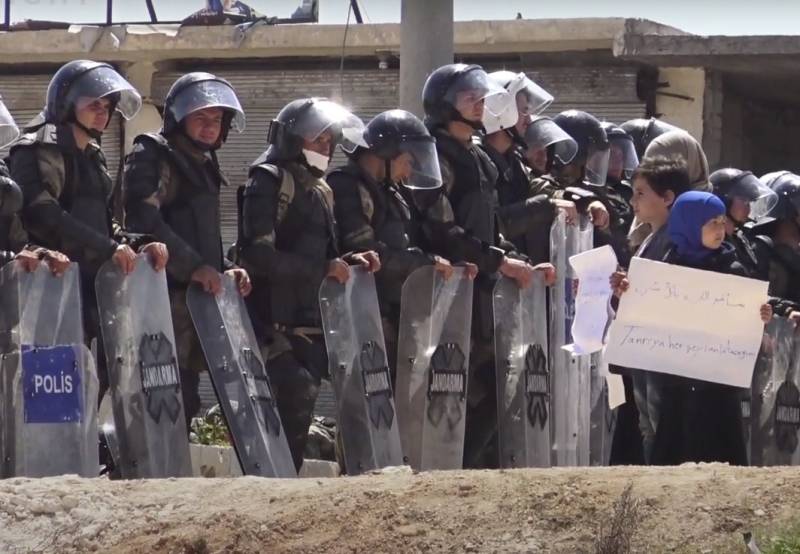 The situation in the area of ​​the M4 highway in Idlib province has sharply worsened. Here, militants protested against patrolling the highway, and terrorist clashes with the Syrian Arab army continue in other provinces of Syria.


In the area of ​​An-Nairab in Idlib province, the banned organization Khayyat Tahrir al-Sham, organized by Russia, organized another provocation against Russian-Turkish patrol of the M4 highway. This time, the militants decided to use the civilian population for their own purposes, driving the residents to a rally against patrolling.

Directly near the highway, near the village of At-Tronbe, a spontaneous protest camp was created, the participants of which blocked the road, interfering with the passage of not only Russian, but also Turkish military equipment. In the end, the Turkish military command decided to disperse the demonstrators.

On April 13, Turkish troops and about a thousand police officers from the Free Syrian Police, a Turkish-controlled formation, arrived at the camp’s location. But militants of the KhTSh rushed to help the demonstrators. Stones flew in Turkish soldiers.

As a result, the HTS moved the protest camp from At-Tronbe closer to Al-Nairab, but the clashes continued there. Representatives of the KhTSH militants said that they have no problems with the Turkish side, just the Turkish command is trying to get out of an uncomfortable situation, as it is constrained by the agreements signed in Moscow. 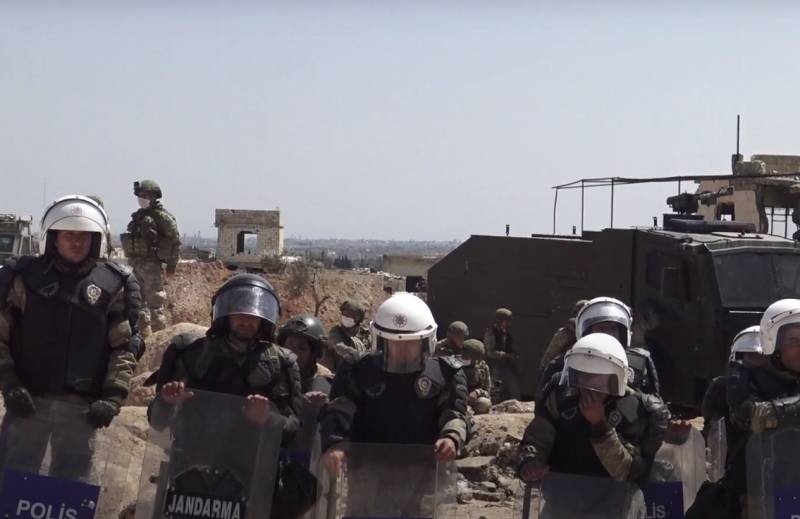 At the same time, the collisions at the highway exacerbated the already existing hostility between the various groups operating in Idlib. So, militants of “Khayyat Tahrir al-Sham” seized one of the prominent commanders of the pro-Turkish “Syrian National Army” Abu Ali Dzhardzhanaz and the guards accompanying him. Ramadan Daiub, as his name is actually Abu Ali Dzhardzhanaza, according to the KhTSH intended to participate in the dispersal of the protest camp near the M4 highway.

Video of the armed groups affiliated with the HTS who stand in front of the Turkish police, who intervened and tried to stop the sit-in supported by the HTS and its government on the international road M4 near the town of Neirab, east of Idlib.#syria #Idlib pic.twitter.com/ofp1pbw1SN

The “Syrian National Army” is sending reinforcements to Idlib province, and it is possible that this is not done to confront the Syrian Arab army, but to restore order at the highway. The Turkish military, not wanting to independently suppress the actions of the KhTS, can send militants more loyal to Ankara against this organization. Clashes also continued between the KhTSH fighters and members of the Jabhat Votania lil-Tahrir (National Liberation Front).

While pro-Turkish groups and even more radical forces are finding out relations between themselves in Idlib, militant attacks against Syrian government forces continue in Aleppo province. So, in the area west of the city of Aleppo, Hayyat Tahrir al-Sham militants attacked the positions of the Syrian Arab army, as a result of which 2 soldiers of government troops were injured.

In turn, on the outskirts of Afrin, Kurdish fighters from the Afrin Liberation Force fired on posts of a pro-Turkish group. No casualties have been reported. Also in Afghanistan, an explosion of a homemade device thundered, in which they hastened to blame the same Kurdish fighters.

In the province of Deir ez-Zor, Syrian Democratic Forces continue to identify and neutralize the militants of the Islamic State banned in Russia. In the eastern part of the province, four IS fighters were detained as a result of patrolling.

Meanwhile, ISIS fighters made a sortie in the desert of Badiya al-Sham, attacking the positions of government troops. Choosing the right moment when the sandstorm began, the militants fired at the positions of the Syrian Arab army in the vicinity of the village of Kobadzhib. As a result of the raid, according to unconfirmed reports, several military personnel of the Syrian government troops were killed.

In the village of Khirbet Hadla, in the province of Raqqa, Kurdish militants from the "Syrian Democratic Forces" as a result of the raid detained several local residents who were suspected of having connections with pro-Turkish groups operating here.

In the village of Khamarat, a mass grave was discovered where the bodies of their victims were dumped by Islamic State militants. Found the remains of at least 200 people, in the near future work will begin on the identification of the dead.