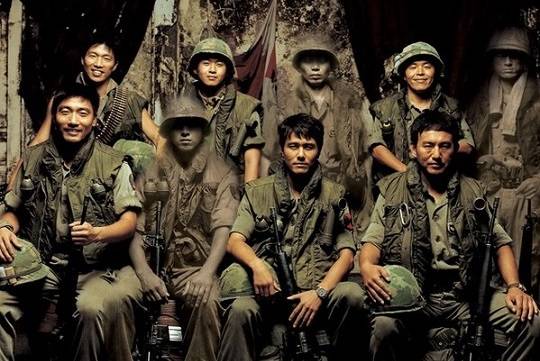 There is a second week of “quarantine”. Someone who has stuck to the couch scribbles angry posts about how the damned regime oppresses his freedom, someone has longed for work for once, someone decided to remember what he said before the sacramental phrase “when will the time” , and someone began to watch lost cinematographic works. The author will speak about the latter. At the same time, about a very specific part, an almost “gray zone”, of cinema - about military horror films.


Military films in the mass consciousness are any movie where people in uniform are simply present, battle scenes or any military conflicts that have taken place or have been invented. A war film, however, cannot but intersect with classical genres. The Soviet Die Hard and the Polish Adventures of Gunner Dolas - pure comedy, the American “Some Good Guys” or the Korean “United Safety Zone” went along the lines of a detective and drama, the Soviet “White Desert Sun” combines an adventure film, and a remarkable element of the same drama, because our cinema is rarely squeezed into narrow frames. 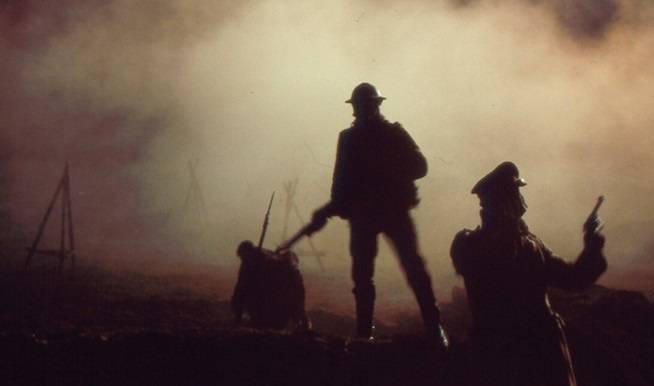 At the same time, fans of military cinema, looking for inconsistencies in uniforms, authenticity historical The events and behavior of seemingly disciplined and trained heroes are also divided into war films to their liking. Someone is impressed by the theme of the First World War, someone of the Great Patriotic War or the war in the Pacific theater of operations.

But now the author will turn to a very controversial area of ​​military cinema, in which both genres and various topics intersect. It's about war horror films. No, the author immediately dismisses cheap things like Nazi explotation, absurd fantastic attempts about secret experiments of crazy low-grade Mengele and various speculative paintings, which try to emphasize the naturalness of the frame to the place and out of place to terrify the viewer, restraining the vomiting.

At the same time, strangely enough, military horror films potentially entitled to a significant share of conventions can be filled with quite serious content and even a certain message to the viewer, most often of an anti-militaristic orientation.

So, a few paintings, at least worthy of the attention of the viewer. However, this is not a rating.

The 2011 film “Enemy” of the joint production of Serbia, Bosnia and Herzegovina, Croatia and Hungary, either extremely ambiguous and multi-layered on this list, or simply the director (Serb Dejan Zachevich) confused the viewer and was confused himself. 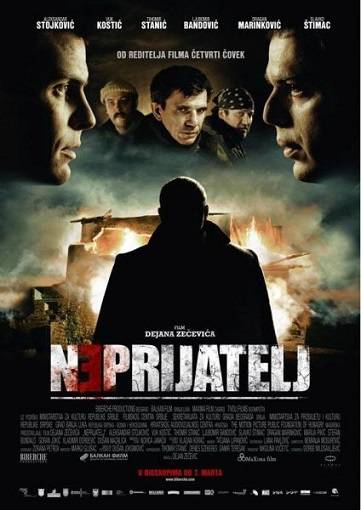 The civil war in Yugoslavia ended. A remote Serb garrison in the depths of a now alien state will mine its own minefields, waiting to be sent home. While patrolling in an abandoned factory area, soldiers discover a walled man named Daba. The Serbs, naturally, release the unfortunate and bring with them to the checkpoint. But the stranger refuses food and water, and answers some questions with some nonsense, which the fighters at first mistaken for mental trauma from a monstrous civil war. But soon, strange things began to happen among the soldiers. 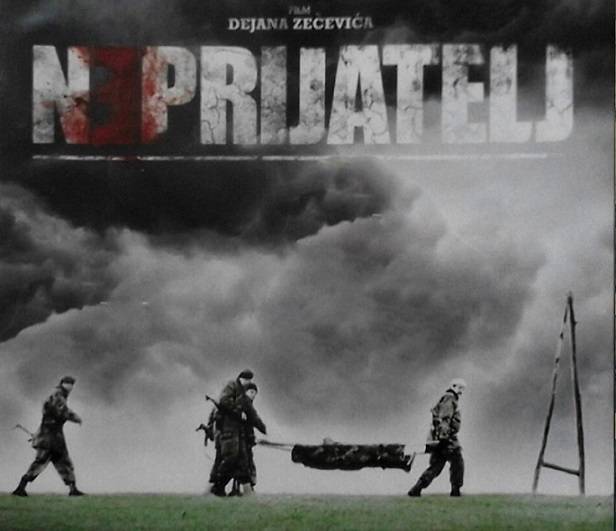 In the next patrol, the Serbs find two fighters. One Serb and one Bosnian, who, surprisingly, together guarded Daba, considering him the devil, guilty of the death of people. As events unfold, madness covers the entire garrison of the checkpoint, and Daba continues to just sit still, making no attempt to kill anyone, peering around with an empty and heavy look, sometimes with a kind of grin. 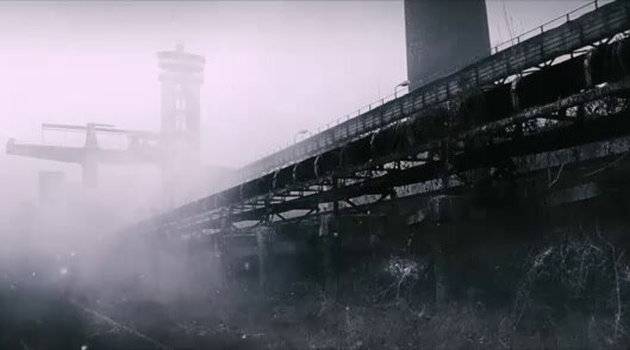 The picture is really very specific, filled with various subtexts, and leaves a lot of questions. Is Duba a symbol of the demon of war, the devil himself, or that invisible grain thrown into Yugoslav land and led to a long-term bloody war? Perhaps only the devil is able to unite people after a fierce meat grinder, a kind of paradox ...

The 2004 South Korean film “Point R”, directed by Kon Soo-chan, came out against the backdrop of the so-called Korean wave, when the names Kim Ki Duk, Im Kwon Teka and Pong Joon Ho in Europe were aspirated. 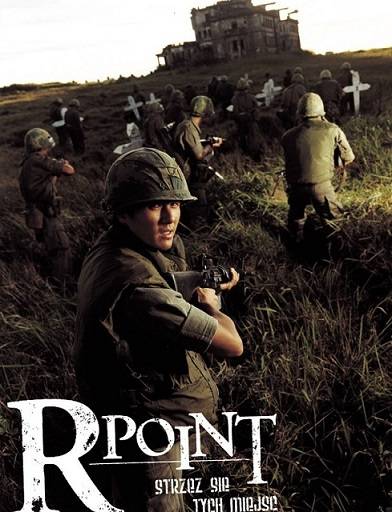 The Point R movie itself touches on a somewhat uncomfortable topic for both Koreans and Americans. The picture unfolds around the participation of South Korean soldiers in the Vietnam War on the side of the United States. The capitalist South Korea managed to send about 300 thousand people to Vietnam. Separately, it is worth noting that the authorities of South Korea from the very beginning of the Vietnamese massacre expressed this desire.

So, Vietnam is blazing. The command, having lost a detachment in a certain gray zone called “point R”, receives radio messages from it and sends a peculiar rescue detachment to this point, the purpose of which is to either find the missing or find the bodies. The detachment is selected very motley, and the commander is famous for the fact that people around him die without his direct fault. In general, the dream squad. 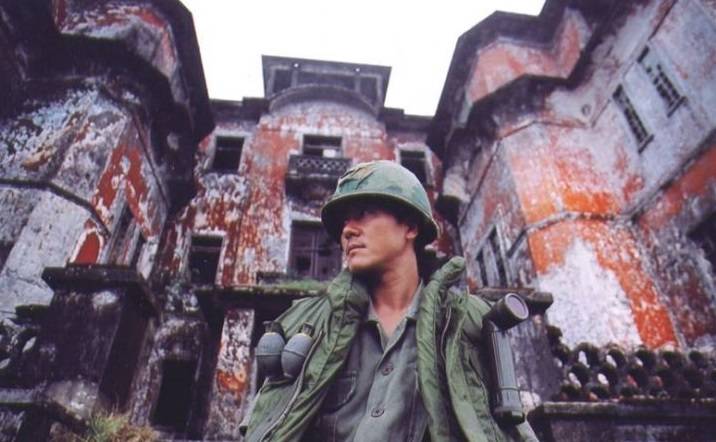 After landing in the area of ​​the indicated point, the detachment, moving deep into the essence of the enemy’s territory, encounters mysticism: the sun does not shine, high humidity, the radio works intermittently. But here the fighters leave the jungle to the phantasmagoric stone building. A gloomy gray ragged structure of several floors rises above the vibrant tropical vegetation. This is where the fighters decide to set up camp. 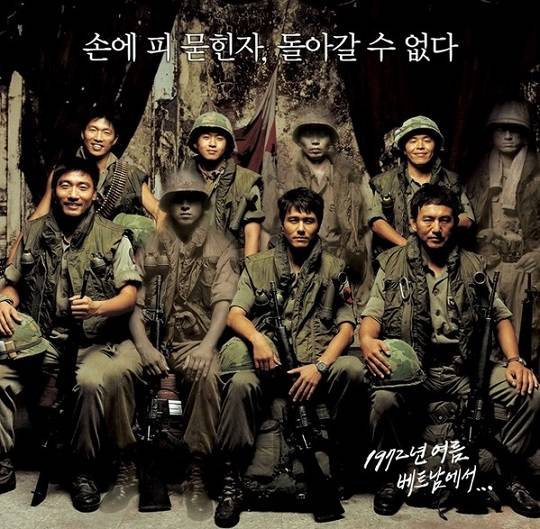 A mysterious and frightening place makes each soldier remember his own sins committed in this war. Someone blames the invisible and treacherous enemy, someone is filled with superstitions, but in the end everyone will be responsible alone for what has been done. Without too much gut and other ways to make the audience tremble, the picture is filled with frightening tension and riddles. Sometimes a mystical anti-militarist message is traced.

The 2002 German-English film Death Watch is not as deep as the pictures above, however, it is a purely Western product. The director of the film is “Transgender Woman” M.J. Basset. For connoisseurs of the themes of the First World War and the atmosphere of deep dirty trenches, this film will be interesting. 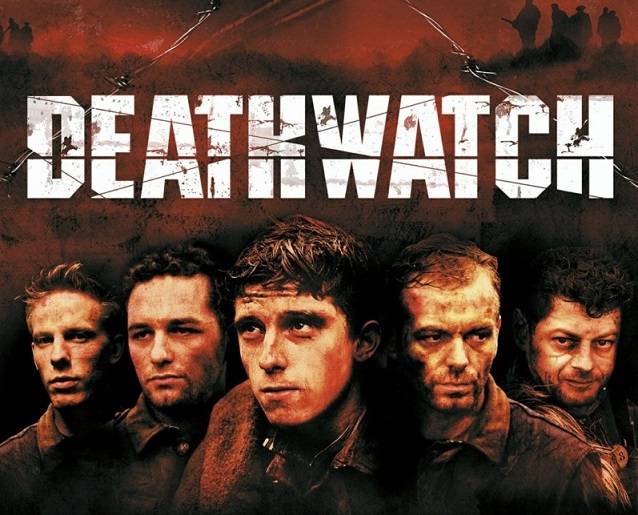 Positional World War I continues to sink hundreds of thousands of people in the swamp. The next night attack of the British soldiers on German positions quite expectedly turns into a collapse. The surviving company soldiers in the heat of a meaningless assault lost their way in the fog and darkness of a sparse plain blown up by craters. When it began to grow light, the soldiers went to abandoned German positions. The trenches are empty, only a bunch of corpses of German soldiers. 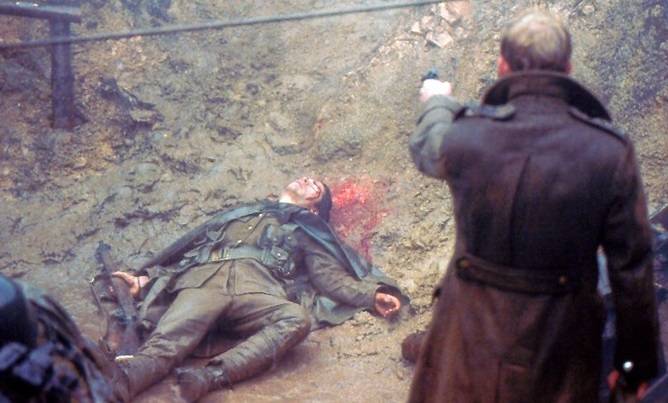 Escaping to a bare unfamiliar area in the middle of an enemy defense line means dying, but, as luck would have it, the radio works only for reception, and on the air you can hear that the company is considered to have died completely. But this is not what the soldiers begin to worry most of all, but the absolute unknown location and some mystical treachery of the soil underfoot. It’s either where from out of the ground wire barriers grow, then the soil bleeds, then the corpses of the dead fall out directly from the walls of the trench. The only German found by the brave Englishmen cannot say anything articulate. 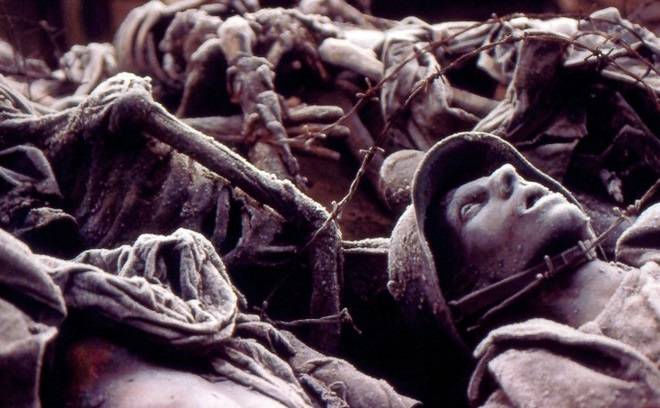 The surviving citizens of Britain are like a match: a mannered captain from the English aristocracy, a green soldier who did not have time to get used to the horror surrounding him, a sergeant trying to keep his mind, several cynical and desperate soldiers and, of course, a fighter who just wants to kill. Such a motley company immediately rushed to look for those responsible. Under the circumstances, the perpetrators were quickly found ...

The film, though superficial, is filled with the atmosphere of war. A certain message is expressed roughly, but clearly, and therefore very controversially. The main characters, unlike modern plastic crafts, are interesting, frighteningly interesting.

Another greetings from South Korea, and again from the director Kon Soo-chan. Still, the wound of the separation of Korea hurts, so the director took this theme as the background for his 506 Sentinel Post 2008 movie. 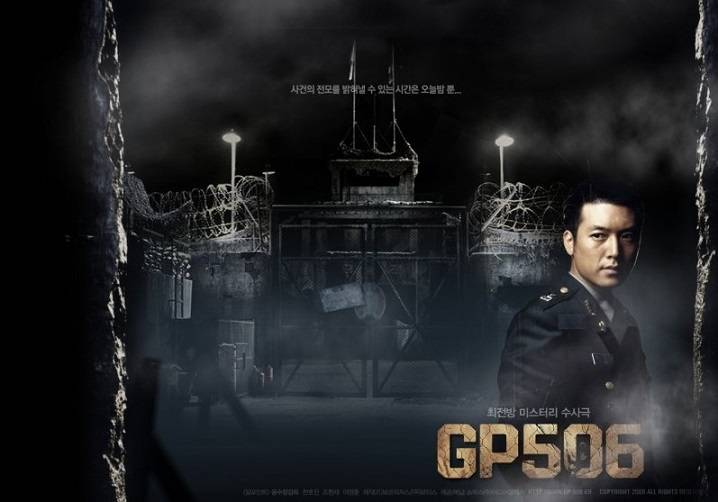 Demilitarized zone from the side of South Korea. Old guard post with a bunker from the Cold War. Suddenly, the command loses touch with the garrison, and the general’s son commands the garrison, so the matter is “delicate”. Naturally, a detachment of fighters is sent to the post. Following the "rescue" detachment, a military investigator is sent. But this time there is no mysticism - just a previously unknown virus is brought into the territory of the post. 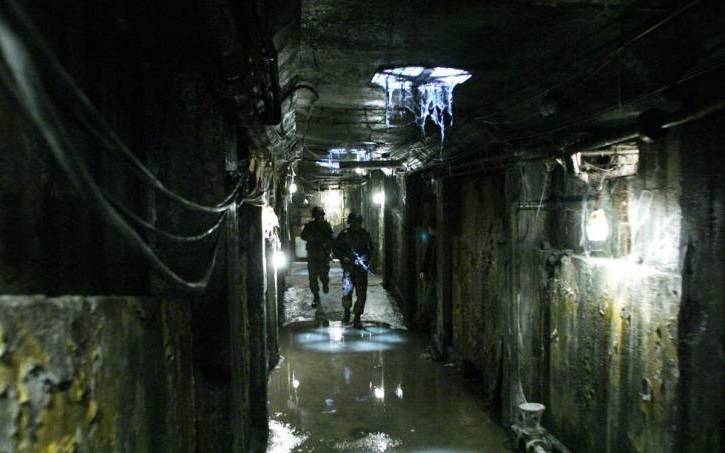 As befits a capitalist country, where each "leader" is his own, soldiers try to survive at all costs. Even at the cost of the life of their colleagues or civilians who will suffer from the virus they introduced. The detective canvas is intertwined with a purely vital one, in which everyone wants to return to the family and is faced with a radical choice. 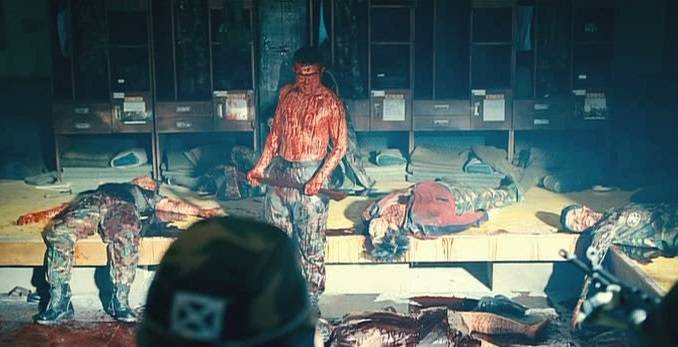 The closed entourage of the bunker with alarmist human content is humus for horror. However, the filmmakers did not fully use this humus. But the Asian flavor remains.

An ambiguous creation from Israel in an ironic form of a war horror film, tightly tied to comedy. The painting "Poisoned" in 2011 is short, without pathos and with a fair amount of outright mockery. In addition, there is an ethnic shade. 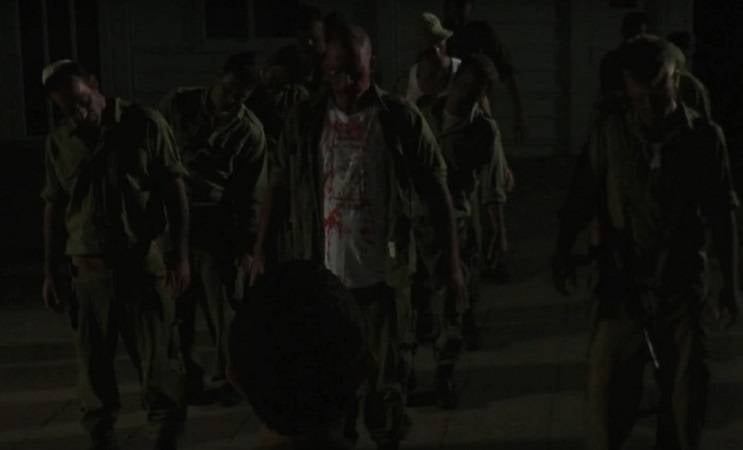 A remote military unit living its own life. Brutal soldiers, led by no less brutal, and therefore always screaming commander, serve relatively peacefully. Periodically, this company scoffs at Private Dani, to whom fate assigned the role of a floor polisher. But after the “planned” vaccination, almost the entire garrison turns into a zombie. Suddenly Dani has a chance to become someone more significant than the eternal cleaner ...

Summarizing all the paintings, we can assume that war horror films are promising, but they also have a huge inherent flaw: the horror genre itself is forever closed within the framework of compulsory commerce. Combining something great solely with money is difficult, but sometimes it turns out.

Ctrl Enter
Noticed a mistake Highlight text and press. Ctrl + Enter
We are
Dmitry Puchkov: You can’t defeat someone’s propaganda - organize and lead your own.What you didn't want to know about England
53 comments
Information
Dear reader, to leave comments on the publication, you must to register.